DHCP stands for Dynamic Host Configuration Protocol and a DHCP server dynamically assigns an IP address to enable hosts (DHCP Clients). Basically, the DHCP server reduces the manual effort of the administrator of configuring the IP address in client machine by assigning a valid IP automatically to each network devices. A DHCP is available for distributing IP address of any Class among A B C D E basis on their netmask description which means it is applicable even for a small network or a huge network.

There are three mechanisms used to assign an IP address to the client. They are:

A DHCP starvation attack may also categories as DHCP DOS attack where the attacker broadcasting fake DHCP requests with spoofed MAC addresses. If official replies to this fake request then it can exhaust the address space available to the DHCP servers for a period of time. This can be performed by using attacking tools such as “Yersinia”.

Now the attacker may place the rouge server in the network and respond to new DHCP requests from clients.

in given below image you can observe that by executing given command we discovered bind hardware with our official router. Here we had used CISCO router for DHCP penetration testing.

Yersinia is a network tool designed to take advantage of some weakness in different network protocols. It pretends to be a solid framework for analyzing and testing the deployed networks and systems.

By default in Kali Linux installed yersinia is available for DHCP penetration testing, open the terminal and execute given command which will open yersinia in GUI mode as shown in given below image. 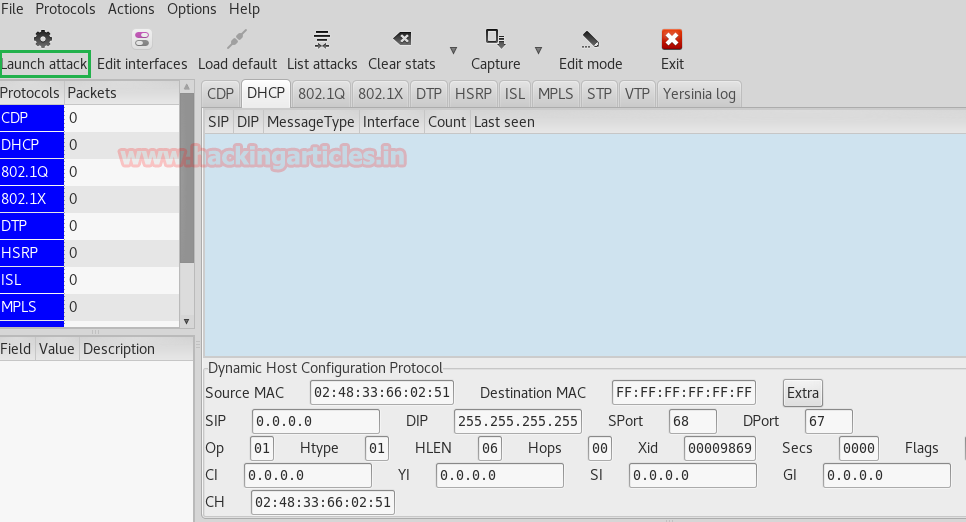 You will observe few tabs in the menu bar click on launch attack; a small window will pop up for choosing the protocol for attack here we had select DHCP, now enable the option for sending  DISCOVER packet. 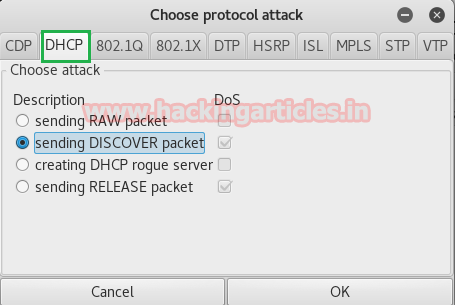 Now it will start sending a Discover packet to the router for release IP for each of its fake Discover messages as shown in the given image.

From given below image you can observe Wireshark has captured the DHCP packet where the attacker machine as source 0.0.0.0 is broadcasting DISCOVER message to Destination on 255.255.255.255. This is DHCP starvation attack which also considered as DHCP Dos attack because its send Discover message infinitely in the network to block the responded server for another genuine request from another DHCP client.

Now when again you will check our router IP table then you will observe that all IP is allocated on some different-different Hardware address as shown in given below image. 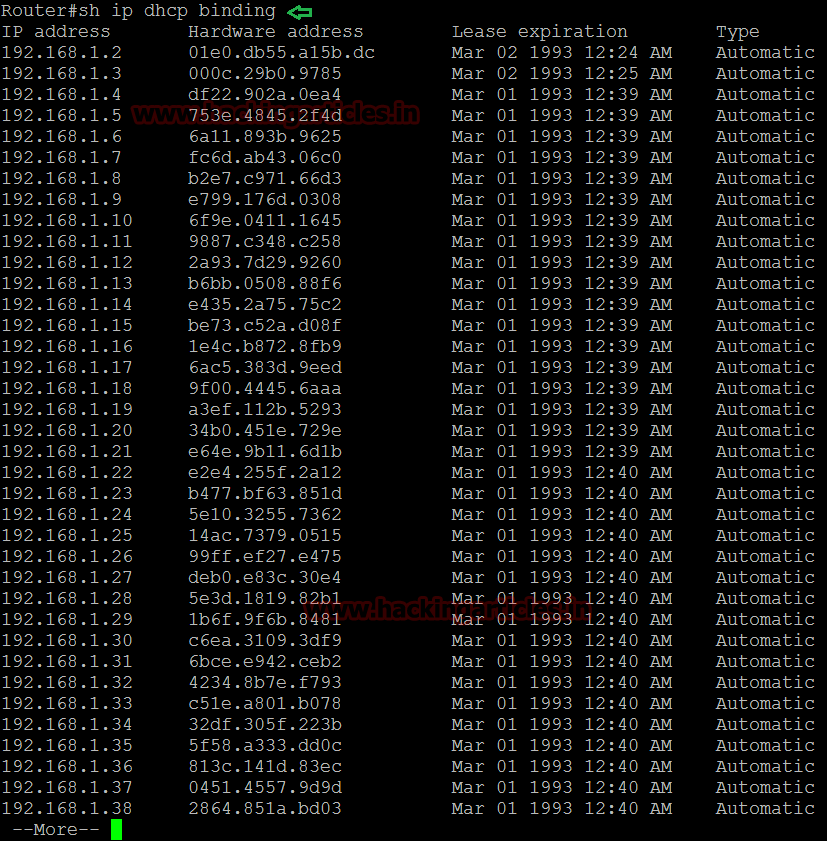 A rough DHCP server is a forged server of attacker which is placed in a local network for stealing information that is being shared among several clients. After DHCP starvation attack, the official DHCP server is unable to Offer IP to DHCP client. Therefore when a client releases its old IP and requests new IP by broadcasting DHCP Discover message than rough server offers an IP as the response to the DHCP client and hence Client request for IP configuration from the fake server and get trap into the fake network. Now if the client is transferring any information over the fake network that can easily sniff by the rough server. 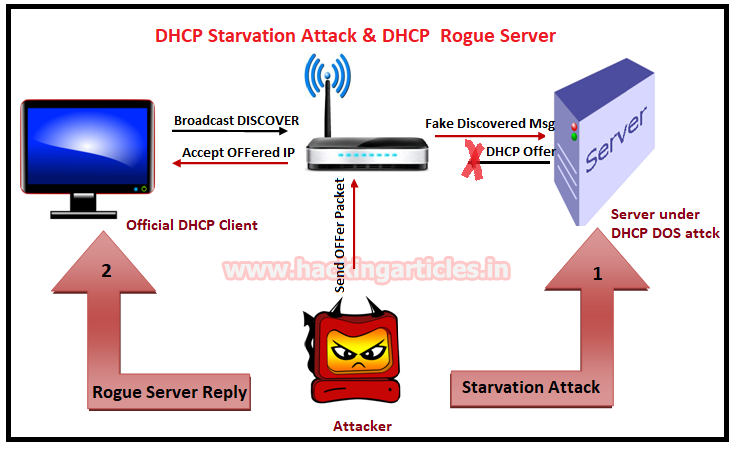 in below image, you check attacker’s machine IP is 192.168.1.104 which will reflect as DNS address in victim’s machine (Windows’s).

Now open the terminal and type “msfconsole” for Metasploit framework and execute given below commands which will create your Rouge server in the network.

If you perceive above command then you will find that it will Start DHCP service and behave like a DHCP server which will offer Class C IP to official DHCP client from specified pool between 192.168.1.200 to 192.168.1.205.

Now turn on any another system in the network and check its IP configuration.

Let’s study the given image where the attack is broadcasting Offer packet in the network and then in the 2nd packet we saw DHCP ACK which means some DHCP client ask for offered IP configuration then we can see DNS query send from an IP 192.168.1.202 to 192.168.1.104.

in given below image you can observe that 192.168.1.202 IP is allocated to Ubuntu which is an official DHCP client. Now if the client is transferring any information over the fake network that can easily sniff by the rough server.  For detail read our previous article “Comprehensive guide on sniffing”