In the previous article of tcpdump, we learned about some basic functionalities of this amazing tool called tcpdump. If you haven’t check until now, click here.  Hence, in this part, we will cover some of the advance options and data types. So that we can analyze our data traffic in a much faster way.

Tcpdump provides us with the option to showcase link-level headers of each data packets. We are using -e parameter to get this information in our data traffic result. Generally, by using this parameter, we will get MAC address for protocols such as Ethernet and IEEE 802.11. 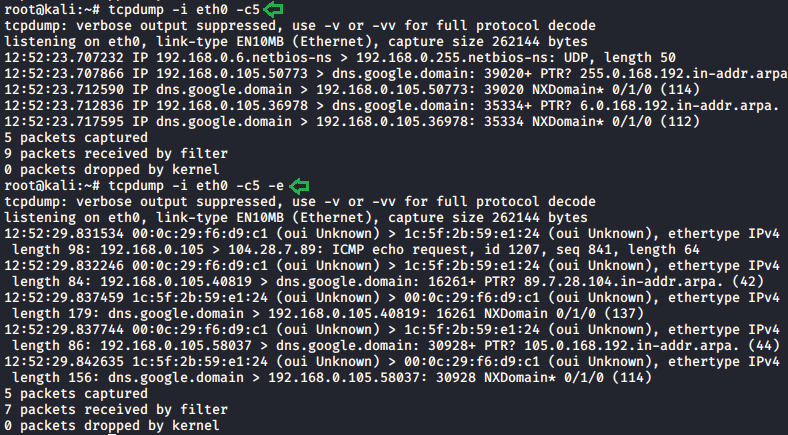 As we all know that, the conversation of a concrete syntax to the abstract syntax is known as parsing. The conversation of an abstract syntax to the concrete syntax is called unparsing or printing. Now to parse a data packet we can use -x parameter and to print the abstracted syntax, we can use -xx parameter. In addition to printing the headers of each data packets, we can also print the packet in hex along with its snaplen. 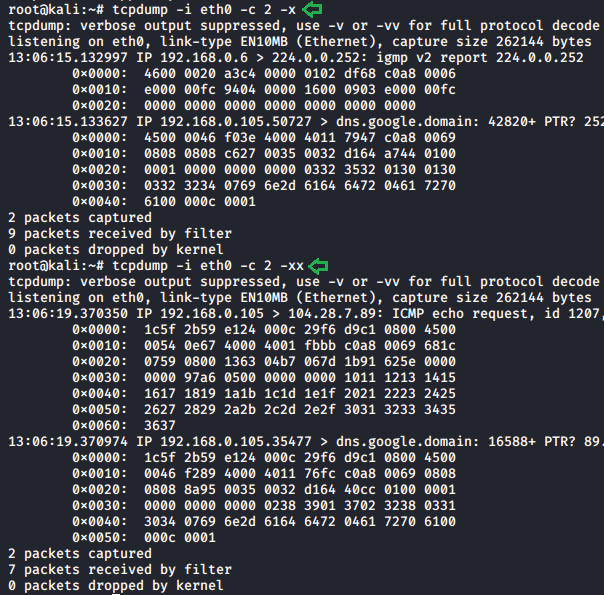 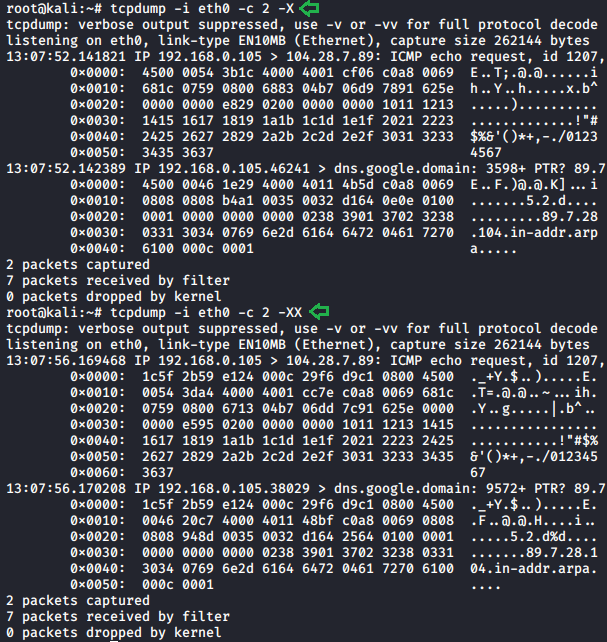 If we are running tcpdump as root then before opening any saved file for analysis, you will observe that it changes the user ID to the user and the group IDs to the primary group of its users.

Tcpdump provides us -Z parameter, through which we can overcome this issue but we need to provide the user name like the following:

There is one more way to do this, i.e. with the help of –relinquish-privileges= parameter.

Timestamp is the time registered to a file, log or notification that can record when data is added, removed, modified or transmitted. In tcpdump, there are plenty of parameters that move around timestamp values like -t, -tt, -ttt, -tttt, -ttttt, where each parameter has its unique working and efficiency.

To apply these features in our scan we need to follow these commands: 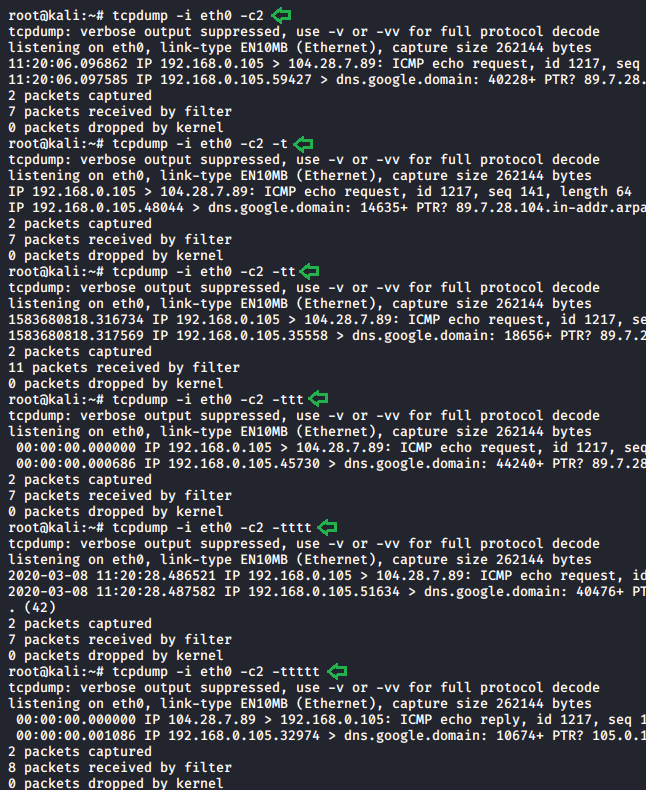 In tcpdump, we can force our scan of data traffic to show some particular protocol. When using the force packet feature, defined by selected any “expression” we can interpret specified type. With the help of the -T parameter, we can force data packets to show only the desired protocol results.

The basic syntax of all force packets will remain the same as other parameters -T followed by the desired protocol. Following are some protocols of force packets:

RADIUS stands for Remote Authentication Dial-in User Service. It is a network protocol, which has its unique port number 1812, provides centralized authentication along with authorization and accounting management for its users who connect and use the network services. We can use this protocol for our scan.

A remote procedure call, it is a protocol that one program can use to request service from a program located in another computer on a network without having to understand the network details. A procedure call is also known as a function call. For getting this protocol in our scan use the following command:

Cisco NetFlow protocol, it is a network protocol developed by cisco for the collection and monitoring of network traffic, flow data generated by NetFlow enabled routers and switches. It exports traffic statistics as they record which are then collected by its collector. To get these detailed scans follow this command.

Link Management Protocol, it is designed to ease the configuration and management of optical network devices. To understand the working of LMP in our network, we need to apply this protocol in our scan.

Pragmatic general multicast, it is a reliable multicast network transport protocol. It can provide a reliable sequence of packets to multiple recipients simultaneously. Which further makes it suitable for a multi-receiver file-transfer. To understand its working in our data traffic follows.

Real-time application protocol, it can code multimedia data streams such as audio or video. It divides them into packets and transmits them over an IP network. To analyze this protocol in our traffic we need to follow this command:

Real-time application control protocol, this protocol has all the capabilities of RTP along with additional control. With the help of this feature, we can control its working in our network environment. To understand the working of this protocol in our data traffic apply these commands.

Simple Network Management Protocol, is an Internet standard protocol for collecting and organizing information about managed devices on IP networks for modifying that information to change device behavior. To see its working in our traffic, apply this command.

Trivial File Transfer Protocol, is a simple lockstep File transfer protocol that allows its client to get a file from a remote host. It is used in the early stages of node booting from a local area network. To understand its traffic, follow this command.

Visual Audio Tool, is developed by Van Jacobson and Steven McCanne. It is an electronic media processing for both sound and a visual component. To understand its data packets in our traffic we need to apply these commands.

Distributed whiteboard, the program allows its users to draw and type the messages onto canvas, this should be synchronized to every other user that is on the same overlay network for the applications. New users should also receive everything that is already stored on the whiteboard when they connect. To understand its data packets, follow this command.

Virtual Xtensible Local Area Network, is a network virtualization tech that attempts to address the scalability problems associated with a large cloud computing area. It is a proposed Layer 3 encapsulation protocol that will make it easier for network engineers to scale-out cloud computing. To understands its data traffic follows these commands. 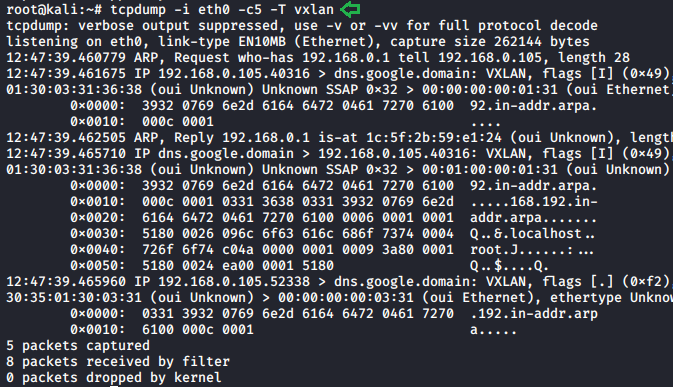 These are some of the protocol which is used under forced packets parameter to get the fixed desired data traffic from scan.

In computer networks, promiscuous mode is used as an interface controller that will cause tcpdump to pass on the traffic it receives to the CPU rather than passing it to the promiscuous mode, is normally used for packet sniffing that can take place on a part of LAN or router.

To configure promiscuous mode by following these commands.

After enabling the promiscuous mode in our network, let us capture some packets with the help of this by applying these commands.

In the previous parameter, we learned about the promiscuous mode that means a network interface card will pass all frames received to the OS for processing versus the traditional operation where only frames destined for the NIC’s MAC address or a broadcast address will be passed up to the OS. Generally, promiscuous mode is used to “sniff” all traffic on the wire. But if we want to switch to multicast mode against the promiscuous mode. Then we need to use –no-promiscuous-mode parameter, which helps us to which the mode without changing the network settings.

This is the second part of the series. So, get familiar with these features and stay tuned for some advance features of tcpdump in our next article.

One thought on “Comprehensive Guide to tcpdump (Part 2)”