Is fuzzing your favourite attack type, but you didn’t enjoy it due to the low speed and high memory usage when you work over with some big dictionaries?

So, today over with this article, we’ll explore one of the fastest and the most reliable fuzzer “Turbo Intruder” – a burp suite extension that will dump the output within a few minutes without worrying about the number of payloads embedded within the dictionary, keeping the memory usage in its mind

What is Turbo Intruder

Turbo Intruder one of the greatest burp suite extensions scripted by “James Kettle” in order to send a large number of HTTP requests and analyzing the results. However, the functionality of this extension is as similar as of the Burp’s Intruder carries. Yes, it is a fuzzer. But as it uses the HTTP-stack thereby some features make it a bit different and faster –

No doubt, the intruder tab is the most powerful part of the burp suite. Whether it’s about to fuzz an application over at a single injection point or multiple, it does it work seamlessly. However, this tool provides whatever we wish to, whether it’s about payloads or the error detections, it is good-to-go.  But when it comes to the fuzzing speed or the memory usage it drops it out. If the dictionary exceeds about a lakh payload, the latency and the memory consumption will be at their peak. But why this all happens?

In order to analyze this, we need to understand the mechanism it carries while fuzzing.

All the major brute forcers, create a TCP handshake for a single request and send the request to the server, thereby the server waits and shares the response back, as soon as the tool gets the response, it then reads out and the same happens again. However, the handshake consumes a lot of time and the sending & reading phases contain a much latency too, thereby giving a high load on the CPU and consuming a lot of memory reducing the speed to fuzz that.

But the turbo intruder is different and as its speed is. It works on an old technology i.e., HTTP pipelining which establishes the connection first and shares as many possible requests in one go without worrying about the received responses in order to minimize the latency and server processing time.

It’s not difficult to find this plugin neither to install it, simply navigate to the Extender tab and then further select the bApp Store option within it and once you scroll your mouse down, you’ll find it right in front with a rating reaching to almost 5 stars. 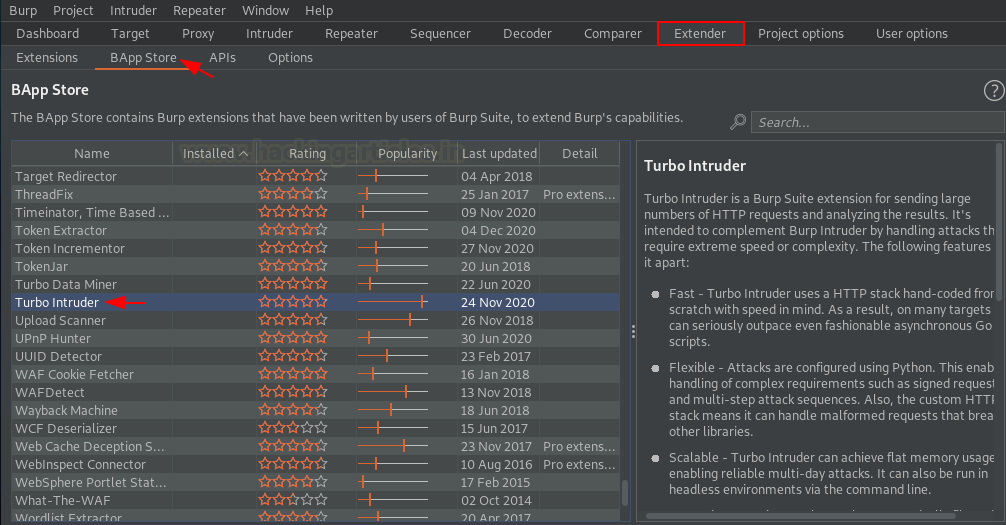 Now simply hit the install button over in the description and there we’re ready to go. 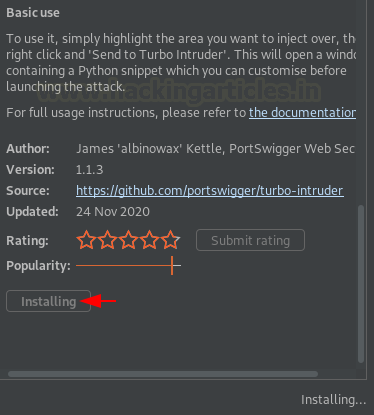 But where it is, it’s not aligned in any of the tabs?

Let’s check out within the Action section, a simple right-click can give us the Send to Turbo Intruder option. 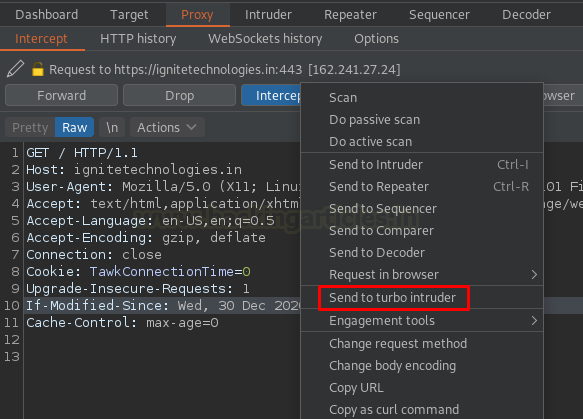 You might be wondering like, all of these concepts are documented either at the portswigger’s web-page or at the extension’s GitHub repository, so what’s new. And what about the practical exposure, how we could confirm that, yes turbo intruder fuzz the application in a much faster way than the basic burp’s intruder does.

Thereby in order to confirm and check that all, let’s tune into our vulnerable application bWAPP and we’ll capture the login portal’s HTTP Request by setting the username to bee and a random password as 12345. 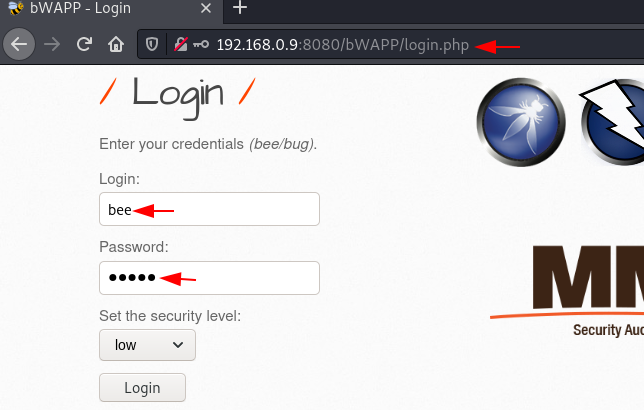 Once the Login button got fired up, we got the Request intercepted at our Burp monitor, so let’s first share it with “Intruder”. 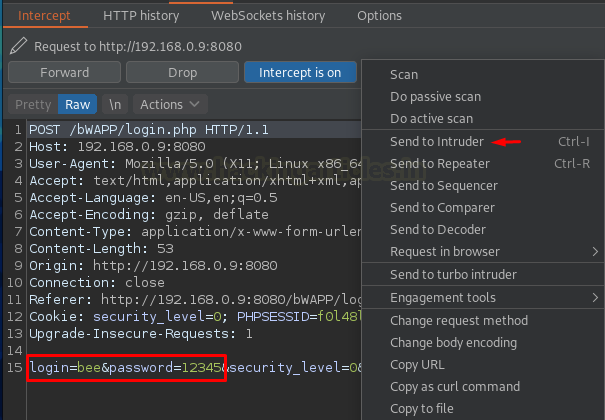 However, the Intruder steps are on our tips, so let’s recall them once again. As soon as the Intruder receives the request, our first work is to set the clear out the things and set the injection points over at the position tab. 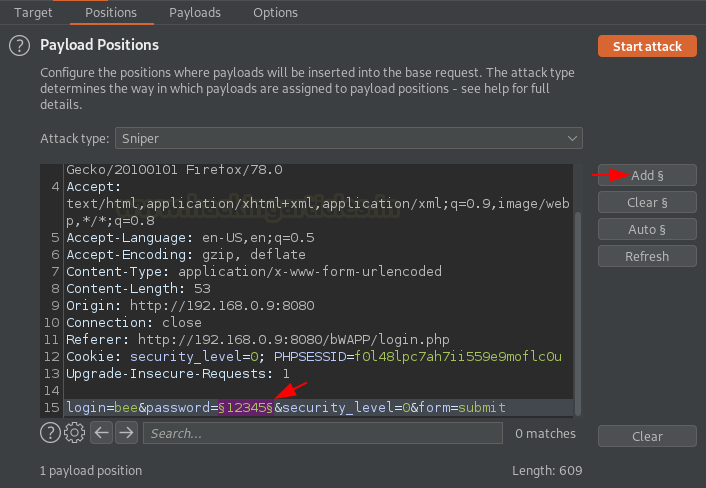 Now, time to inject our fuzzing lists. Switch to the Payloads tab, right next to Position one, and click the Load button in order to select the desired list. For this section, we’ve modified the 10-million-password-list of Daniel Miessler SecLists Github’s repository and have injected bee & bug within it.

From the below image, you can see that the number of requests is more than 100,000, which is not large but still it could help us to determine the speed. 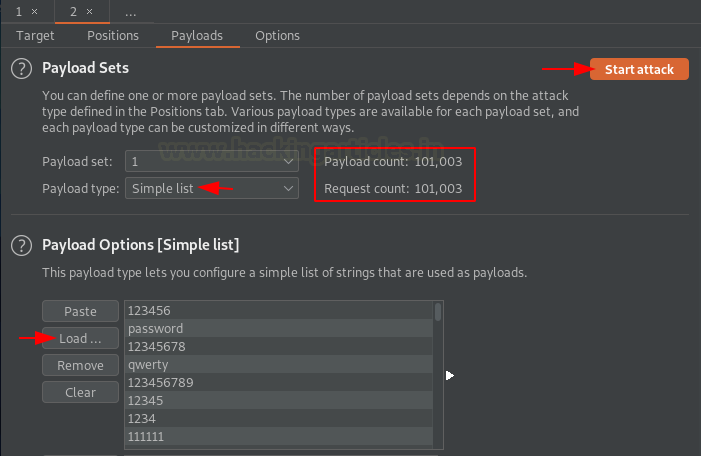 Now as soon as we hit the Attack button, the fuzzer starts up and it took about 60+ seconds to fuzz about 1700 requests which makes it about 23 requests per second (RPS). 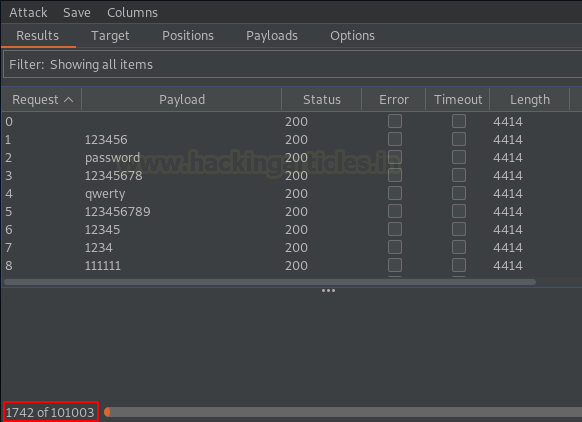 Let’s first pause the intruder here and will check what Turbo Intruder dumps out as its speed.

Back into the intercept tab, we’ll select the payload position and will then hit right-click in order to share the request to the Turbo Intruder. 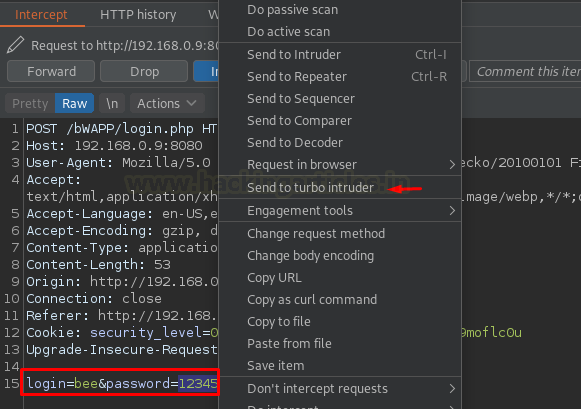 As soon as the “Send to turbo intruder” option got fired up, we got a new window popped in-front of us. Let’s explore what it contains.

The window was segregated into two sections the upper part where our “shared request” is embedded into and just below that in the other part we got a “snippet of python code” aligned.

However, over into the Request section, we can see that our injection point was converted into “%s”, representing where the payload will be going to hit.

And at the other section, there is a drop-down list with a python code displayed, which thus could be modified as per the attack scenario. 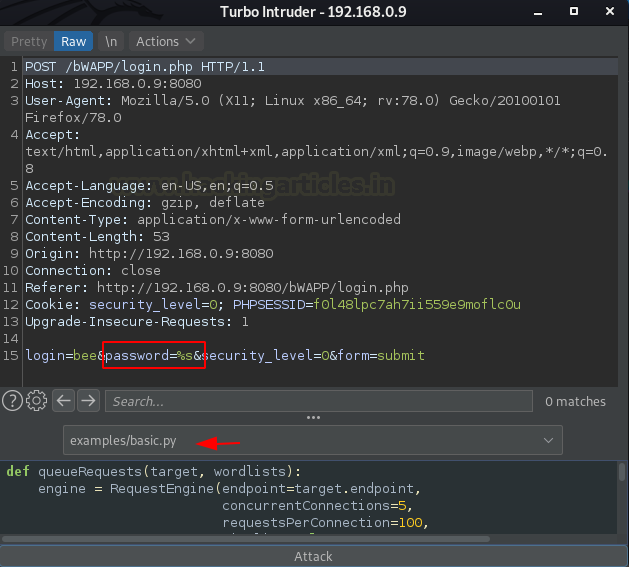 The drop-down list contains a number of attacking python scripts, that we could use accordingly whenever we need.

So, for the time being, let’s use the most common script of the Turbo Intruder i.e. examples/basic.py 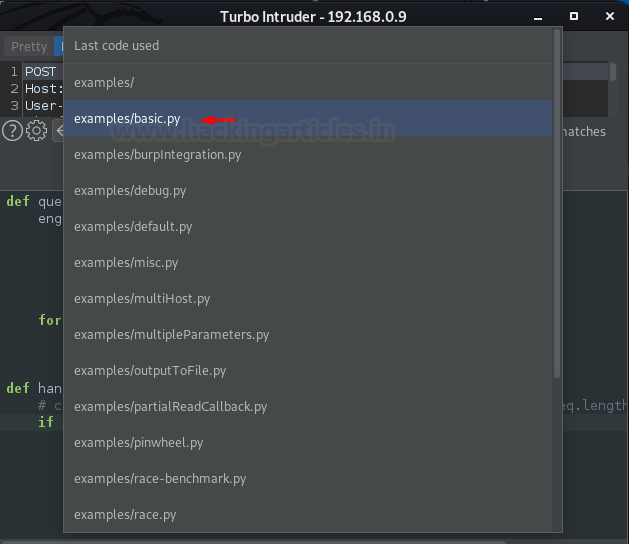 Once we select that, the python code within it got displayed on the screen. Let’s see what it says – 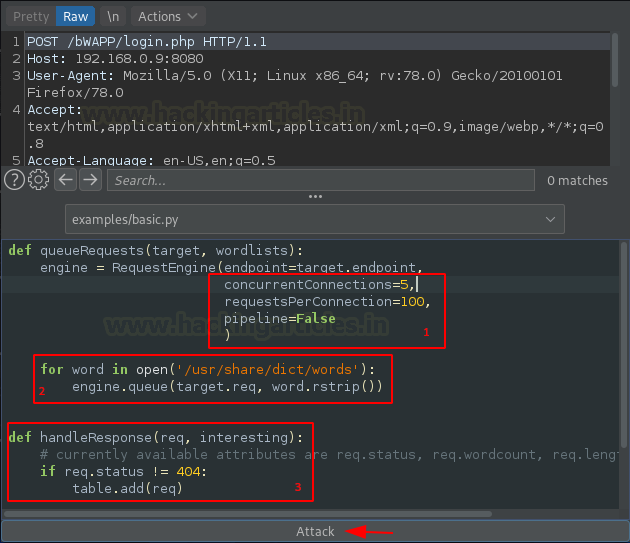 Now, let’s inject our dictionary by defining its path while manipulating the code. 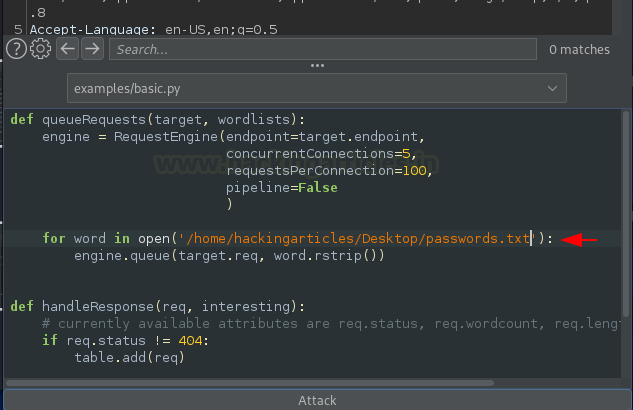 Further, we’ll hit the Attack button in order to initiate our fuzzer. As we do so, within 73 seconds it’s just 1029 requests shared, creating the RPS (Request per Second) count to 14. 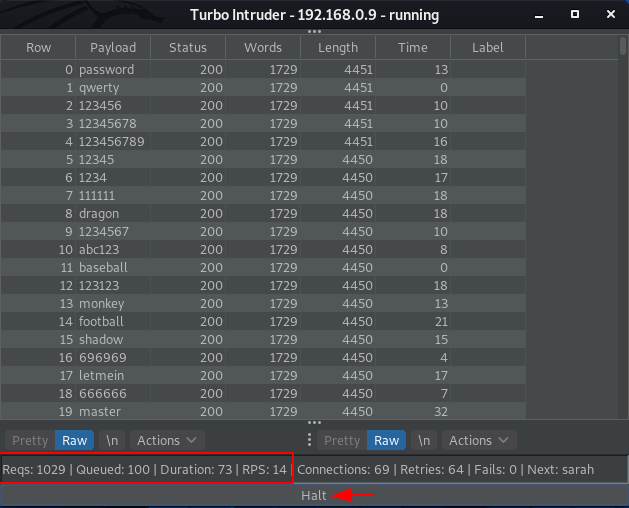 You might be wondering like, this needs to be faster than the basic intruder, however, the RPS rate for the Burp Intruder was 23, and it’s just 14.

This is all due to the default configuration in the python script as the concurrentConnections was just 5 and the Request per Connection was 100. Let’s modify it all and start the attack again, in order to do so hit the halt button and configure the same with 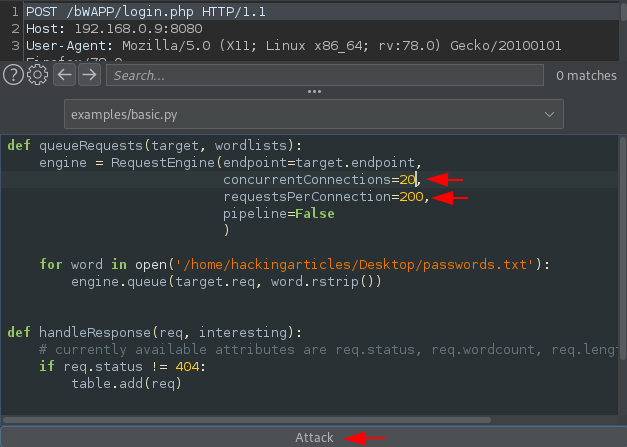 And as the attack executes up, the RPS rate jumps directly to 94 and within just 3 seconds the fuzzer hit about 280 requests.

Thereby for this attack, we can say it’s about 4 times faster than the Basic Intruder.

However, during the attack, you could find that the retries value is going up, as the fuzzer was initiating. So, is the requests are not hitting?

No, it is an indication that the connection per request value might be too high for the server to handle, making the attack is less optimal, thus we need to cut it down and reduce it to half. 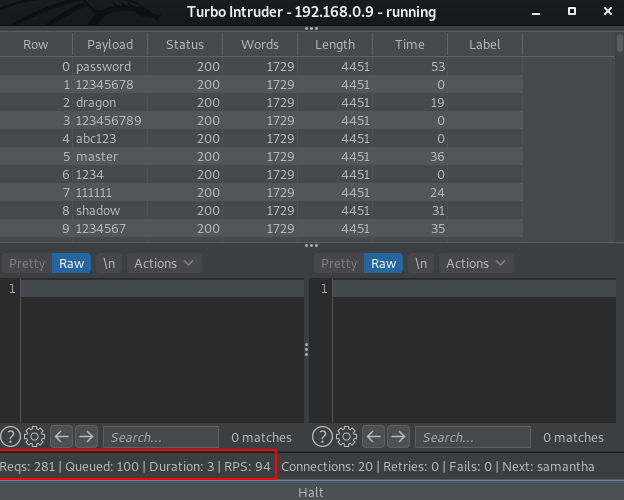 Do you remember, we halted the Intruder’s fuzzing? Let’s resume it and restart our attack over the turbo intruder, and we’ll then wait for a few minutes in order to analyze the output.

From the below image, we can see that Turbo Intruder is ahead with 3000+ hits, displaying the speed it carries within.

Over in the above section, we’ve discussed that we can manipulate the python script as we wish so. However, manipulating it doesn’t require any advanced scripting skills, it’s just that we know what the code wants to say. So, for example –

We want the table to dump only the 302 Redirection, we don’t want any 200 OK, neither 404 Error, thereby in order to do so we just need to manipulate the 3rd code snippet. 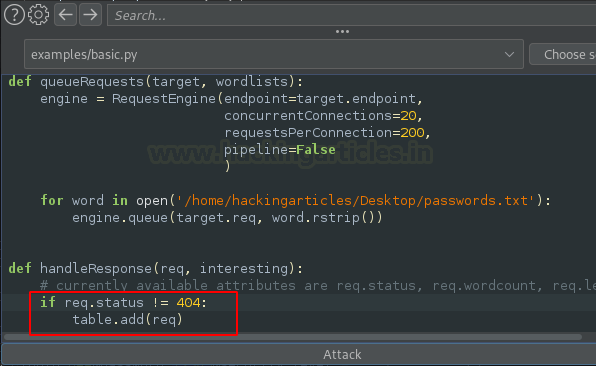 Now over here, we’ll change not-equal to (!=) with equal-equal (==) and will modify 404 with 302, Such that the output will only have the redirection requests listed. 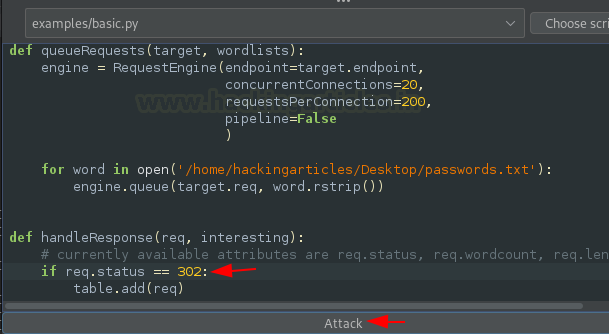 From the below image, we can see that within 3 seconds we got our output listed over at the table segmented. 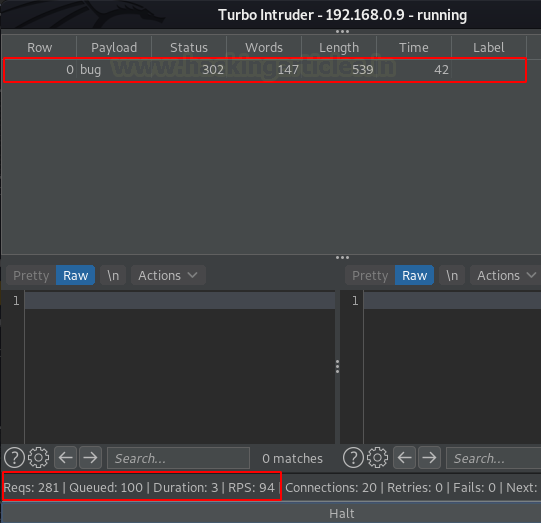 You might have used Cluster Bomb over in the basic intruder which helps us to fuzz the application with multiple parameters. However, in the same way, we’re having a python script listed in the drop-down menu too which will thereby provide us with the option to fuzz as similar to the cluster bomb payload-type. Let’s check that out. 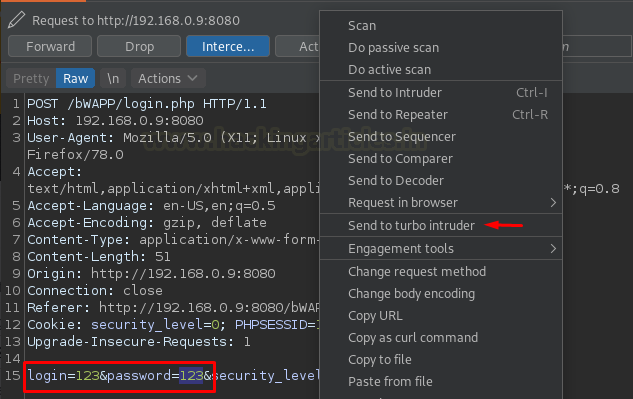 There, over in the request portion, let’s set “%s” in order to select the injection points. 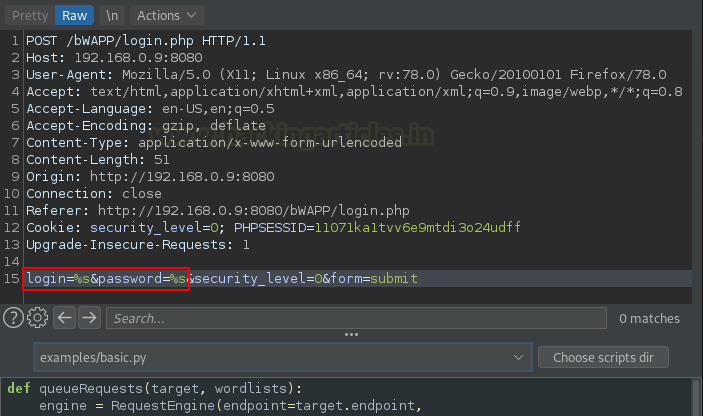 Time to choose the script, click on the bar to check the drop-down menu, and then select examples/multipleParameters.py 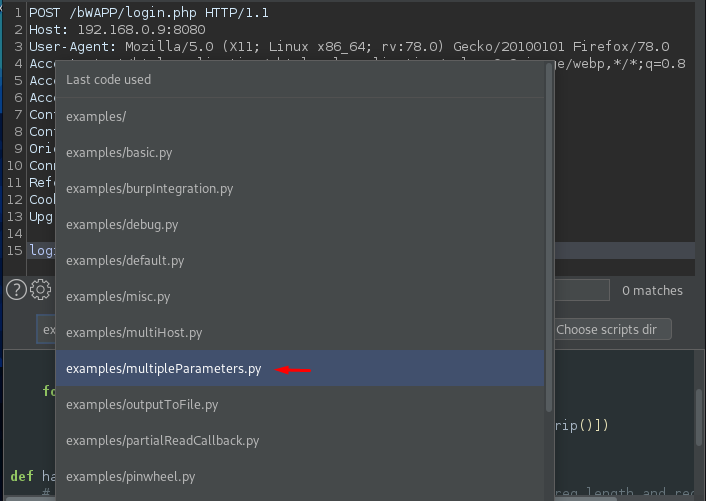 Once clicked-on, the script is there for us to get manipulated.

Let’s boot the speed by manipulating the concurrentConnections=20 and requestperConnetction=200, further we’ll set the dictionaries for the first word and the second word. 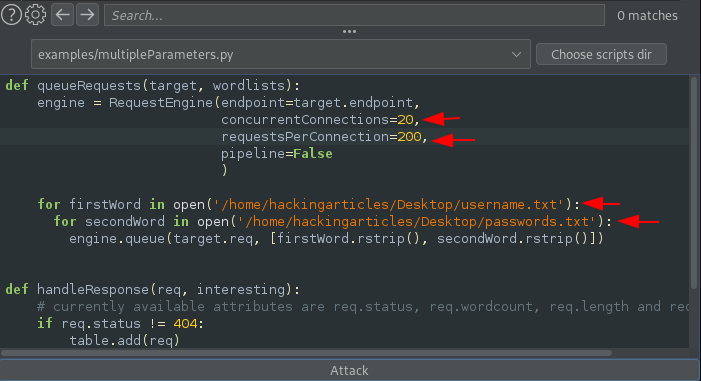 And there we go, as soon as we hit the Attack button the screen got shuffled and we got the output table in-front of us. Within a few minutes, as we double-clicked the Length section, we got the 302 Redirection with bee/bug. 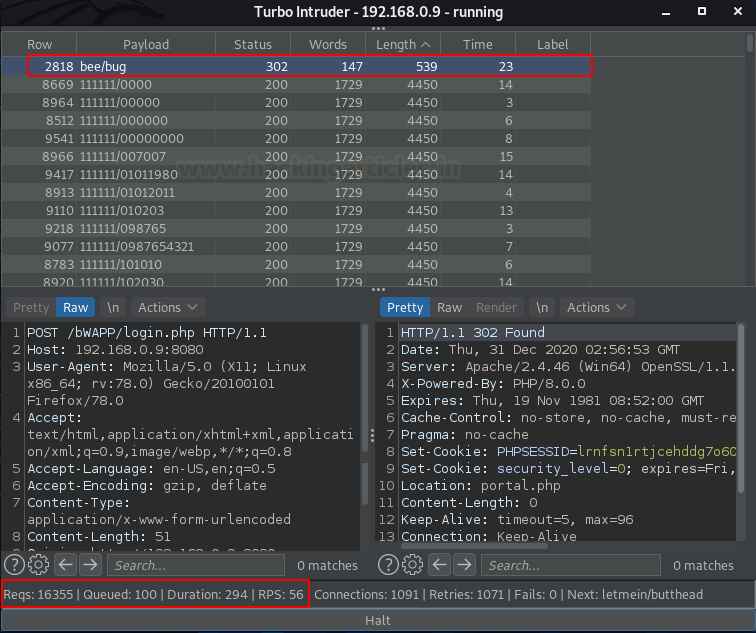 A Detailed Guide on httpx