This article will describe the different type of process involves in encoding of data.

The term encoded data means wrapped data and the process of encoding is used to transform the data into a different format so that it can be easily understood by different type of system. For example ASCII characters are encoded by means of numbers ‘A’ is represented with 65, where as ‘B’ with 66 an so on.

As we known computer does not understand human languages therefore we need to encode the data into binary language which is easily readable by computer systems hence encoding is very important. It utilises such schemes that are widely available so that it can simply be reversed. Encoding means data transformation, not data encryption consequently it does not need a key in decoding.

The internet only accepts URL’s in ASCII format, URL encoding entails encoding certain parts of the URL character set. This process takes one character and converts it into a character triplet that has a prefix of “%” followed by two digits in hexadecimal format.

Step 2 – To convert from decimal to hexadecimal, take the decimal value and divide it by 16, the hex value will be written beginning from the quotient all the way up to the remainder. So, the hex value of 97 will be 61.

Each base64 digit represents exactly 6 bits of data.Is a radix-64 representation of ASCII string, here’s how we get it?

The Base64 index table:

In the Table 1.2, for character “R” of “Raj”, the values in the Bit patternsection are in 8-Bit format and they are being converted into 6-Bit and the decimal value of the 6-Bit pairs are in the Index section.Table 1.1 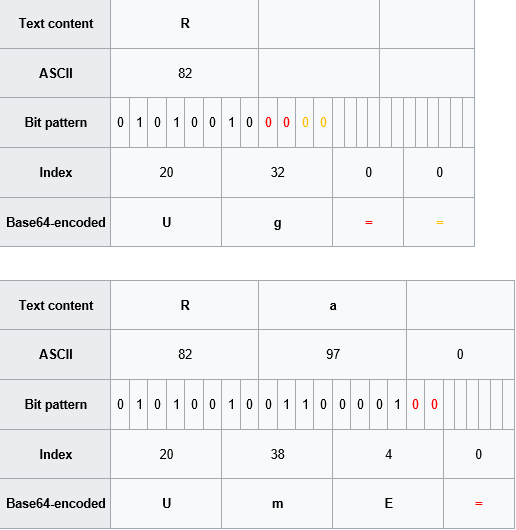 In table 1.4 to further build on the logic used in table 1.2 and 1.3, “Raaj” is converted to “UmFhag==” in Base64, with the addition of an additional “a”, the complexity of the conversion increases. In the Indexsection we can see an additon of 33, 26 and 32 due to the change in the bit pattern. 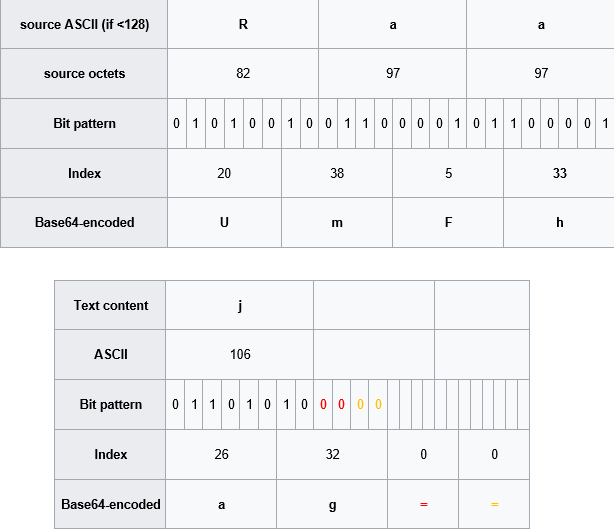 This is a letter substitution cypher, it’s conversion process from plain text to cypher test is dicinging the total number of alphabets in half: A to M and N to Z. The first half mirriors the second half and vice versa. So, A = N and N = A.