When we say “ping,” we often are just limiting its definition to checking whether a host is alive or not. In my opinion, while this purpose is correct, its technical details are often ignored. Many network administrators are unable to answer what ping is in details; or how it works. So in this research-based article, I am going to present some points that I didn’t know before starting to read about the topic.

In this article, practicals are based on a Windows 10 x64 system to ping a Debian Linux x64 bit architecture. While this shouldn’t matter in many cases, it matters for a certain part where we calculate TTL and an anomaly case as well. More of that later though. While reading about this topic I learnt tons of new stuff that for me, as a penetration tester, would definitely be useful to understand in-depth how those exploits are working.

Let’s get to the good stuff now.

It has seven layers and each layer performs a special network task. They are as follows: 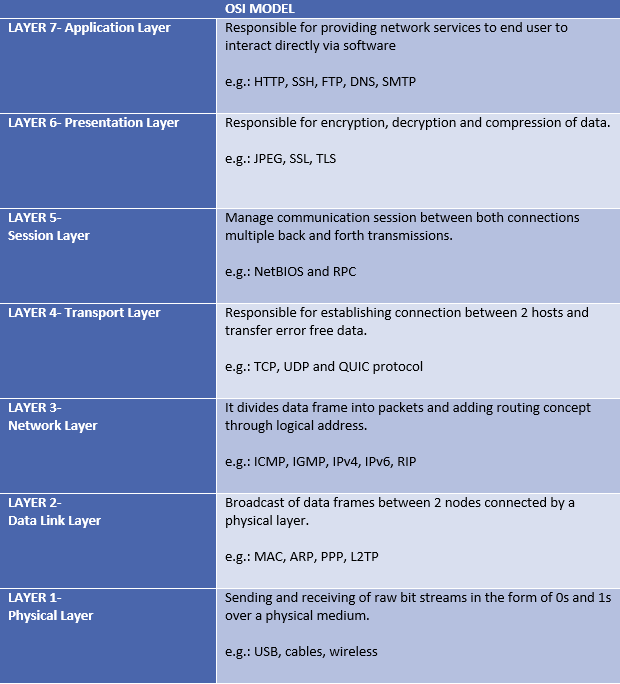 Each layer has a specific task to do and we’re not going into depth with each and every one of them. Let’s save that for another day. Let’s focus on layers 1, 2 and 3 for now.

Layer 1, 2 and layer 3 combined are responsible for the effective transmission of ICMP packets.

While “pinging” a system, layers 1, 2 and 3 are in action. Each layer defines its own “format of protocol options” known as a header. It precedes the actual data to be sent and has information such as the source IP, destination IP, checksum, type of protocol etc. And when it is attached with the actual data to be sent, it forms a protocol data unit which is renamed as per the layer.

Default protocol data units (PDU) in these layers are:

We’ll be using these terms quite often and it is important to be clear what these terms mean. While the data is travelling through these layers, it is converted virtually into its own PDU.

IEEE 802.3 is a set of standards and protocols that define Ethernet-based networks. Ethernet technologies are primarily used in LANs. There are a number of versions in IEEE 802.3 such as the 802.3a, 802.3i etc. When we ping, there is some data sent to the destination host and in a specific format.

It is the principal communications protocol for relaying datagrams across network boundaries. IP has the task of delivering packets from the source to the host solely based on the IP address in the packet headers. IP defines packet structures that encapsulate the data and headers.

Since IP does not have an inbuilt mechanism for error control and sending control messages, ICMP is here to provide that functionality. It is a supporting protocol used by network devices like routers for sending error messages.

Ping is a computer networking utility used to test the reachability of a host on IP network. Ping operates by sending ICMP Echo request packets and waits for ICMP Echo replies. This reports error, TTL, packet loss etc. One ping request is a combination of Ethernet, IP and ICMP headers and data.

Useful ping options in windows and Linux are:

The ICMP packet is encapsulated in an IPv4 packet. The general composition of the IP datagram is as follows: 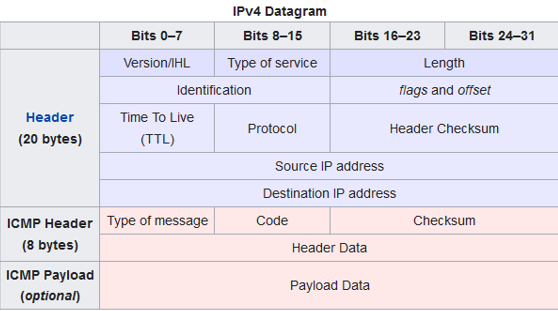 When a ping command is sent to the host, the datagram is encapsulating Ethernet header, IP header, ICMP header and payload too. The minimum size of an IPv4 header is 20 bytes and the maximum size is 60 bytes.

But, when we analyse ping in Wireshark, the size of the frame written in the log is 74 bytes. This is because while pinging, we would need the destination and source MAC address as well, which is available in the Ethernet header.

So, ping sends an encapsulated IP packet which is a combination of:

But, keep on reading for very interesting cases that made me write this article.

Wireshark is a freely available network monitoring tool that is able to log all the traffic incoming and outgoing from a single NIC card. I won’t be telling how to set up Wireshark and start logging, please use this tutorial for it.
In the above case, when we ping a Linux system from a windows system, we see something like: 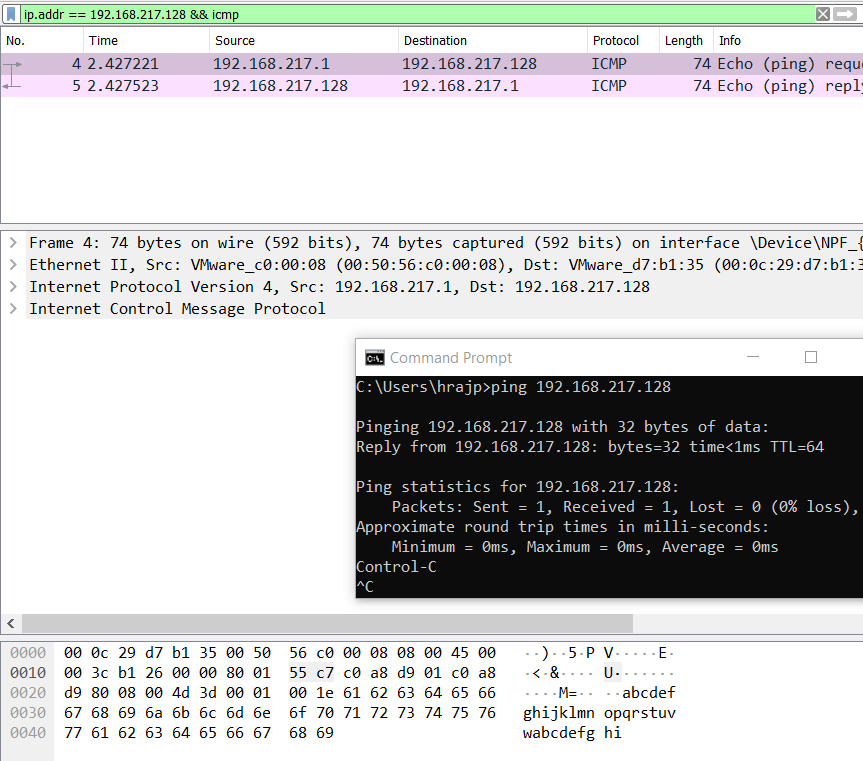 Let’s go step by step and see what just happened.

How is a datagram sent to the destination?

When a datagram is sent from source to destination, in our case, when we ping, the format of the datagram is as follows:

I just captured a single datagram in Wireshark when I pinged a destination host and analysed it layer by layer.

Talking about Layer 2 here, we can see that Ethernet type 2 is being used. 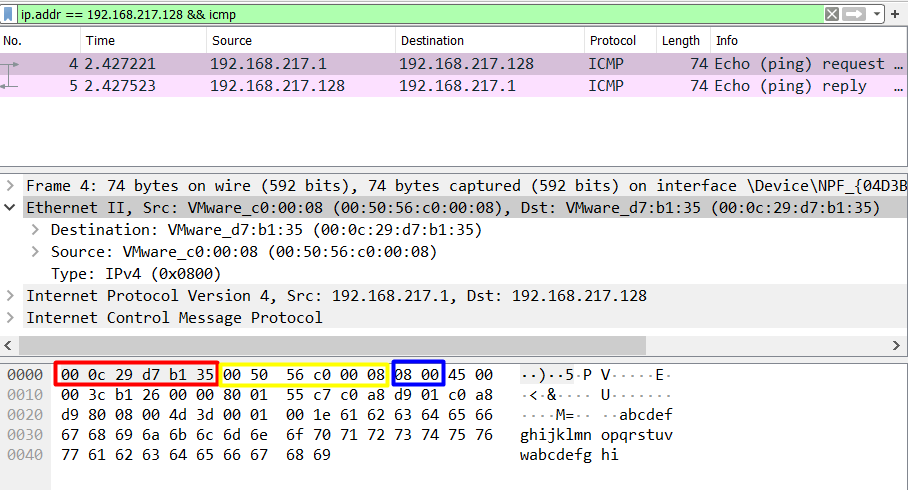 As we talked in point 2, Ethernet frame sent with ping includes the source and destination MAC along with the type of protocol being used.

The most important field here is the EtherType field as on analysing these bytes we can find the protocol that was used in the communication. This is really essential for forensics point of view and some of the most important hex values are:

Moving on to layer 3, we see an IP packet, since obviously ping is using IP protocol to check if a host is alive or not. Here is the observation of the hex dump of IP packet: 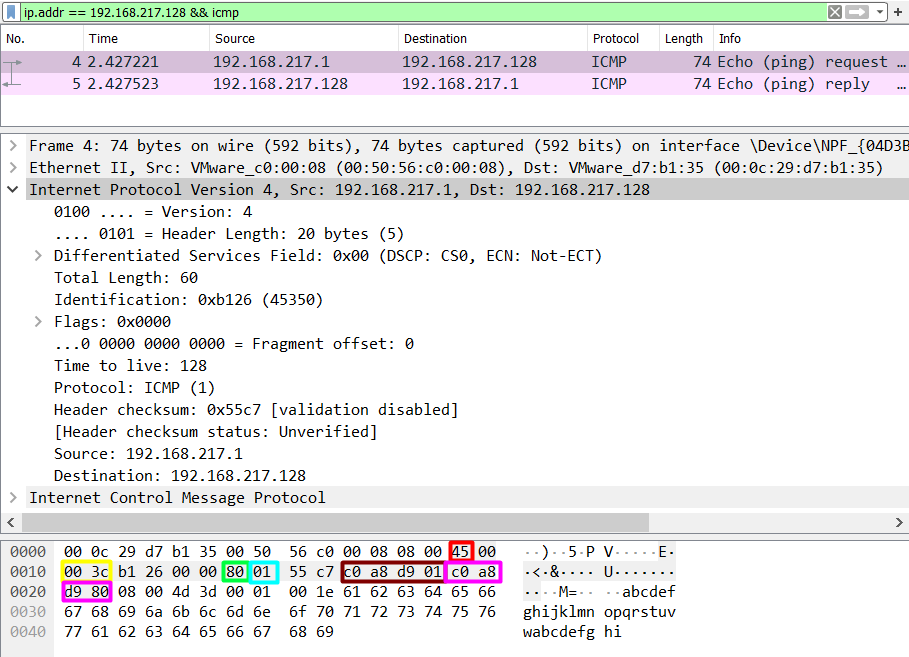 From the analysis of this IP packet, we observe that IP header is then added to the Ethernet frame to make a packet that has the above-mentioned options specified. By analysing this data we can observe a lot of different things. Some of which are:

One really interesting thing to note is the Header Length. We see that header length is written as 45 in hex which comes out to be 69 which is not possible. On further breaking down this byte, we see that the first nibble (half byte) tells the version of the protocol.

A datagram is completed and transported when ICMP header is added in Layer 3. We know that IP lacks error control mechanism, so ping uses ICMP to serve that purpose. ICMP protocol is specified in IP header as we saw above and hence, it is important to analyse ICMP header to better understand the underlying mechanism of ping. 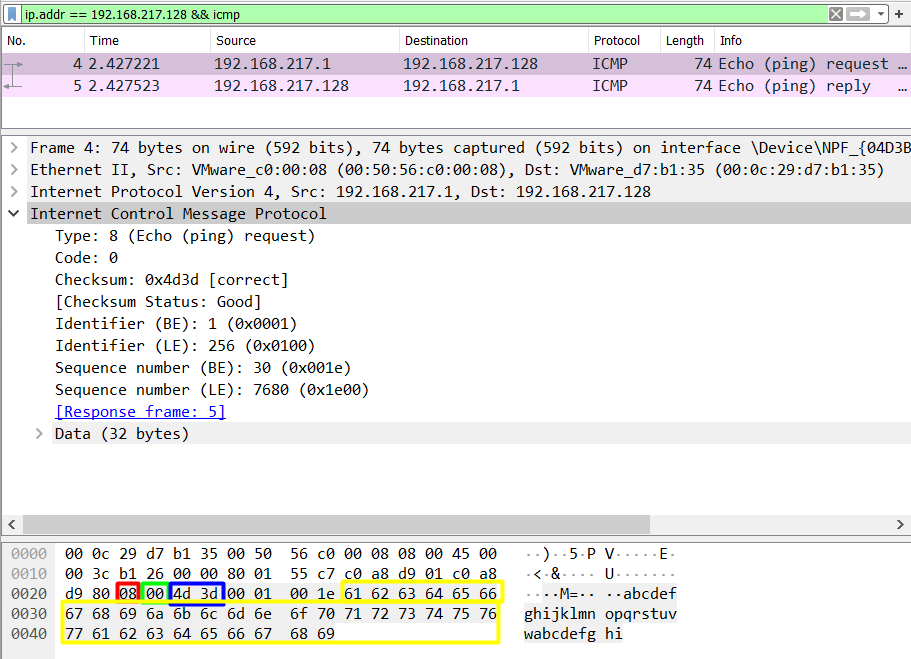 Type: It is the type of request of ICMP request sent. According to IANA, there are 45 assigned requests.

We can see, 08 as the Type of request which symbolises Echo request. When one system pings another system, it sends a Type 8 request and if the host is alive, the host sends back Type 0 (Echo Reply) request.

Code: It is simply the hex value of the type of ICMP request message. It ranges from 0 to 15 for each of the types. This reference is taken from Wikipedia: 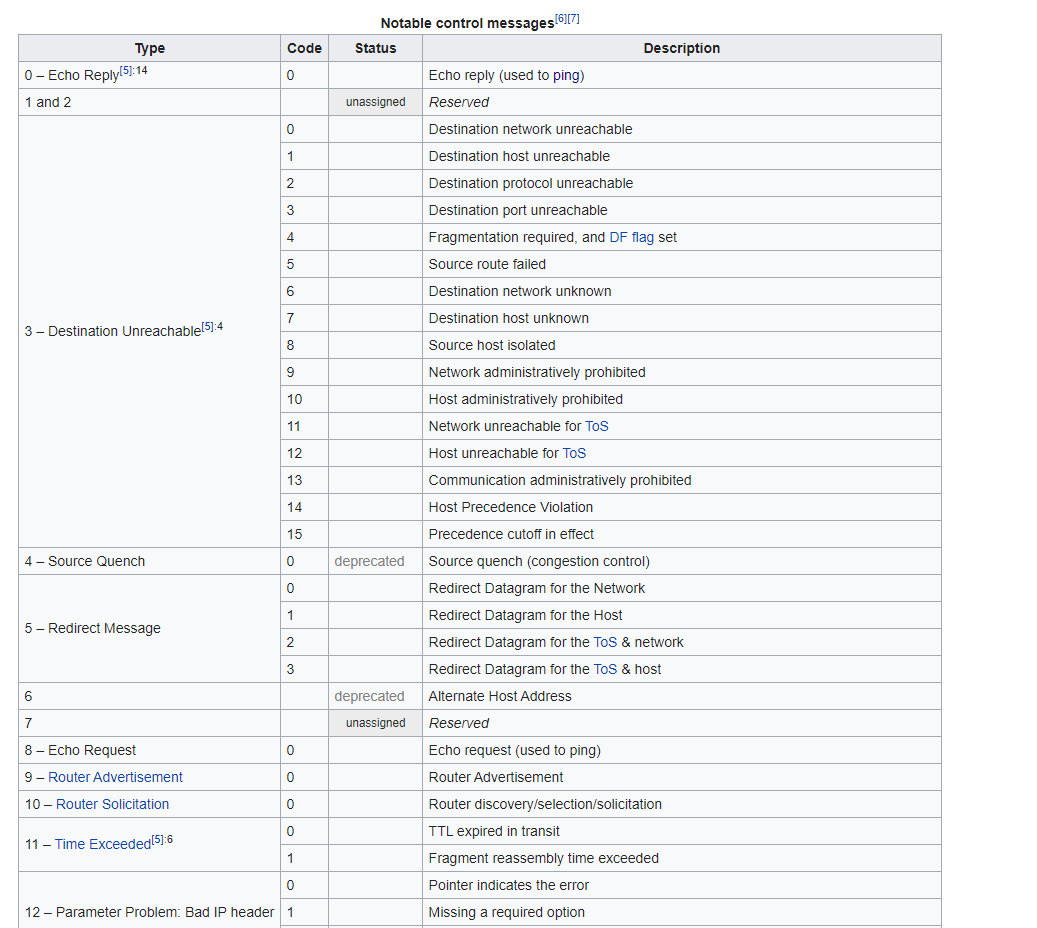 So, to calculate the checksum, we have to split the ICMP header and payload data into multiple pairs of 2 bytes each, calculate the one’s complement of first two bytes, add with the next one and repeat it till all the bytes are exhausted.

Here, checksum status is shown as good and correct, so we need not look any further.

According to RFC 791, an IP can handle a datagram of maximum size 65,535 bytes. However, by default, the data in ping is 32 bytes and the whole datagram is by default 60 bytes in case of windows. Adding 14 extra bytes of Ethernet header, it comes out to be 74 bytes which we see in Wireshark. Focus on the colour codes here:

Maroon= Total length of the datagram 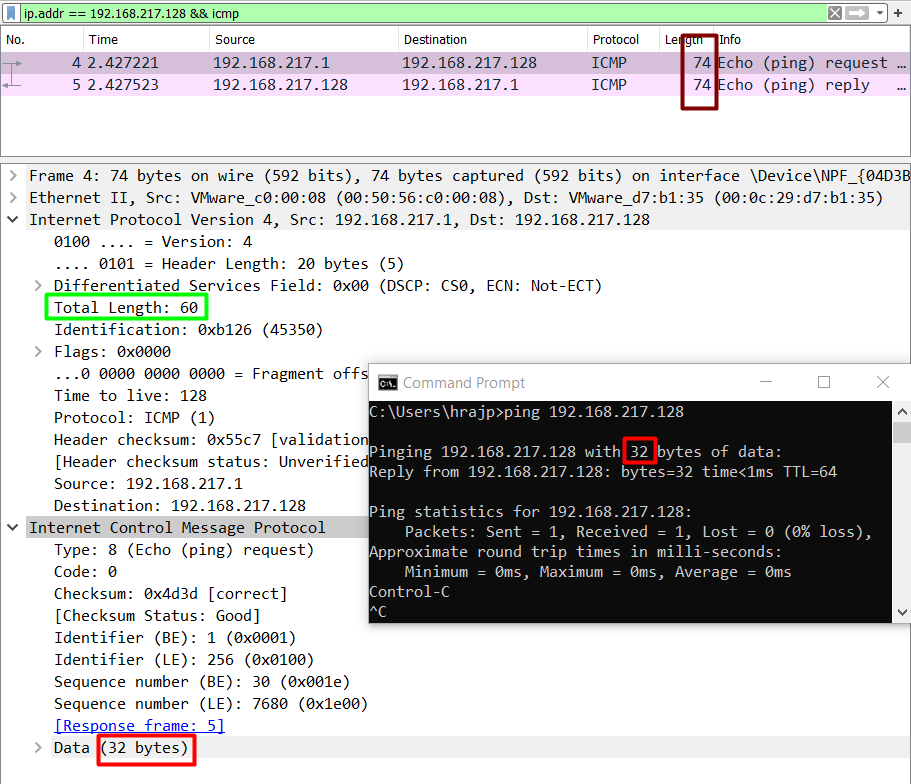 However, we can add data as per our wish, as long as it remains under 65,535 bytes using the ping –l option in Windows. This also has some limitations. Let’s talk about them in the next section.

MTU stands for Maximum Transmission Unit and it is the size of the largest Protocol Data Unit that can be communicated in a single network-layer operation. IEEE 802.3 standards restrict the minimum to 48 bytes and the maximum to 1500 bytes. So, if I am to transfer more than 1500 bytes of data in a single datagram, it would be fragmented into multiple packets.

We see that the size of IPv4 datagram comes out to be 242 bytes. This is a result of 200 payload bytes + 8 bytes ICMP header + 20 bytes of IP header + 14 bytes of Ethernet header. The noticeable thing here is that still a single datagram is sent and no fragmentation is done. Let’s push the limit to MTU now. 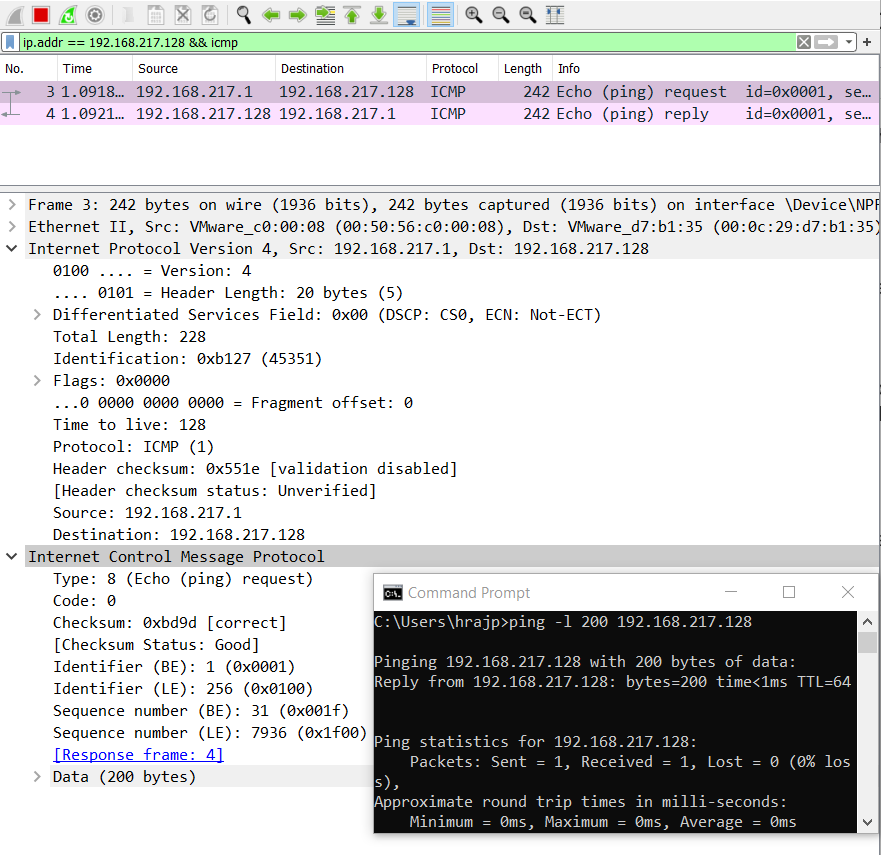 Notice some things here. We have not set the data size as 1500 which is the MTU rather 1472 due to the fact that protocol has some bytes for the headers in reserve.

20 bytes of IP and 8 bytes of ICMP headers are automatically added in every transaction as we’ve seen. So, 1500-28=1472 is the maximum payload data size that we can specify in a ping command.

These 1500 bytes are then collated with ethernet header and finally, a datagram of 1514 bytes is transferred.

So, what will happen when this data size is increased from 1472? Let’s check out.

IP fragmentation or ping fragmentation is a process in which a packet exceeding the size of MTU is broken into multiple pieces and transacted to the destination host. RFC 791 has the procedure for IP fragmentation, transmission and reassembly of packets.

Let’s increase the size of the data payload to 2000 bytes and let’s see what happens.

Now, we can see that fragmentation is done and the datagram is split into two fragments of size 1480 and 520 bytes. Why? 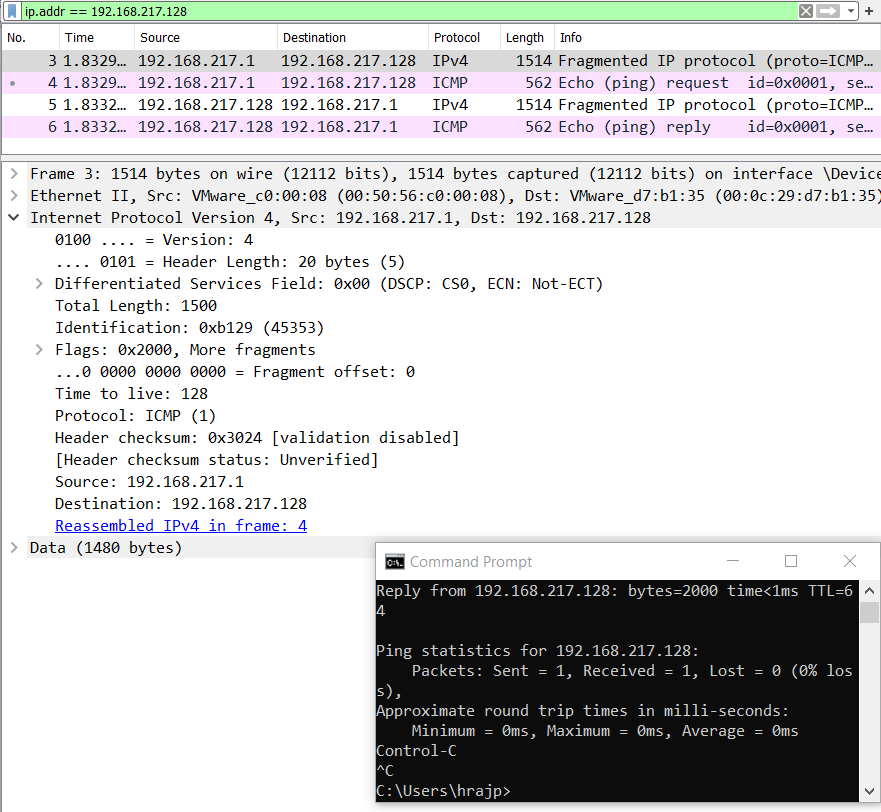 The first fragment is 1500 bytes in total length but the data is only 1480 because 20 bytes are always in reserve for IP protocol header, and the second fragment is 520 bytes in payload data size.

It is important to note that ICMP header is not added in the first fragment and it will only be added when the whole datagram is complete. It is because ICMP is responsible for error control and it calculates the checksum. For checksum to be calculated, whole data should be transmitted first and hence, ICMP header is not added in the initial fragments but only in the last fragment.

Now we push these limits to the maximum size. 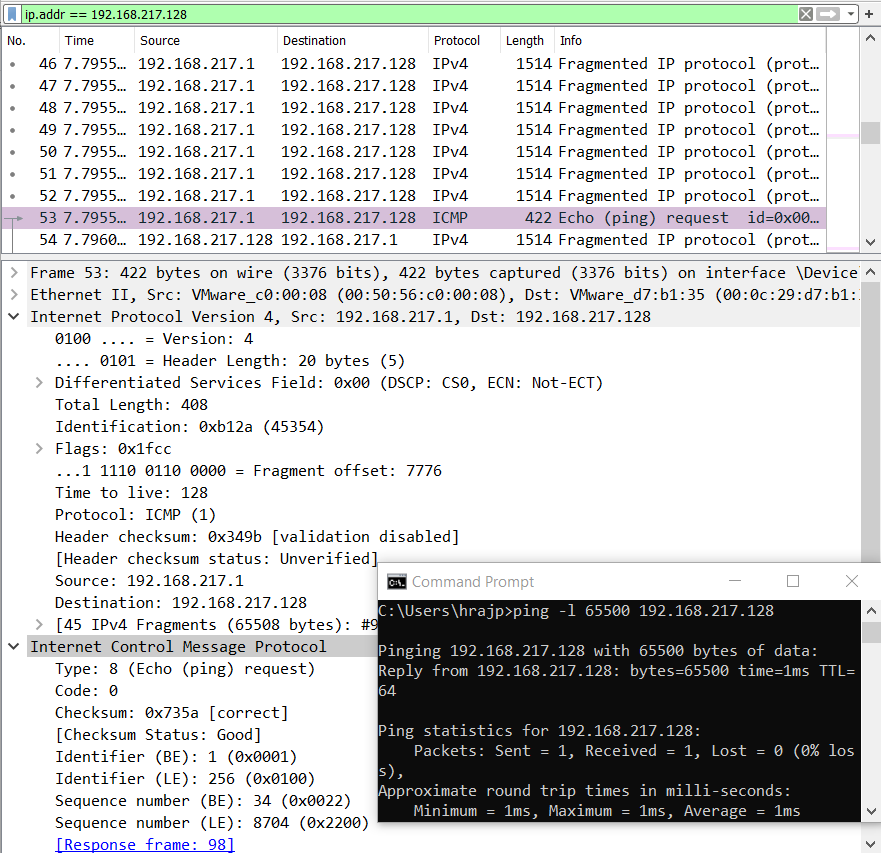 You must not get confused here. 65500 is the maximum size of a payload that we can specify in ping.

Let’s focus on a case when the payload size is specified as 0. Let’s see what the protocols do with 0 bytes of data. 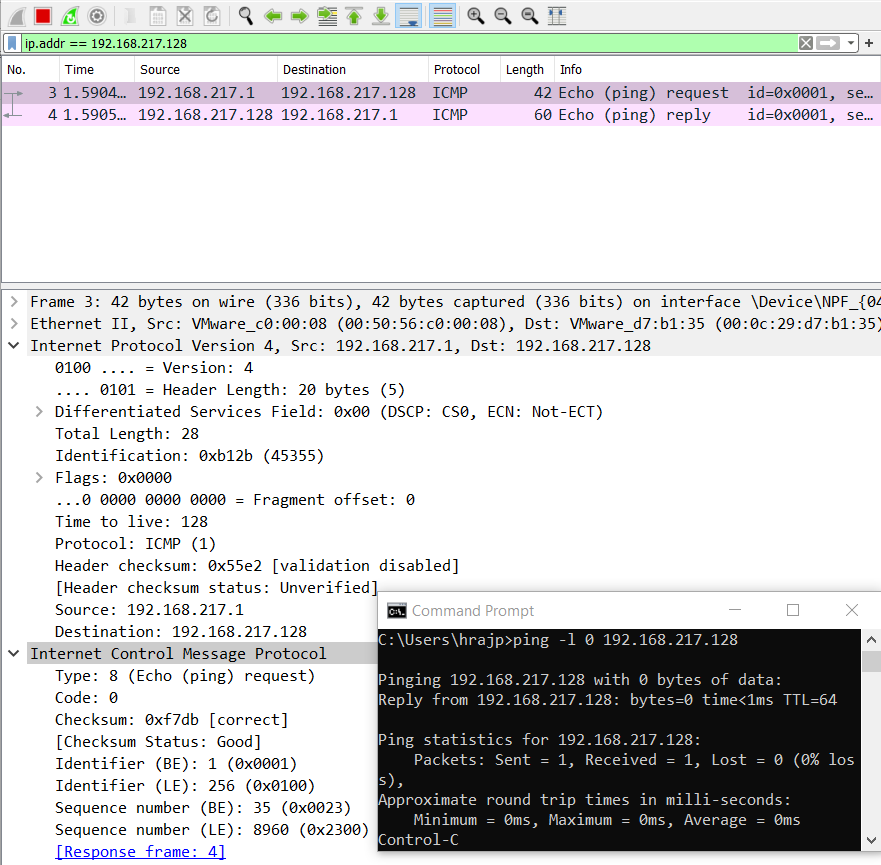 On analysing the hex dump, we see that a Linux system is replying with 18 null bytes of data. 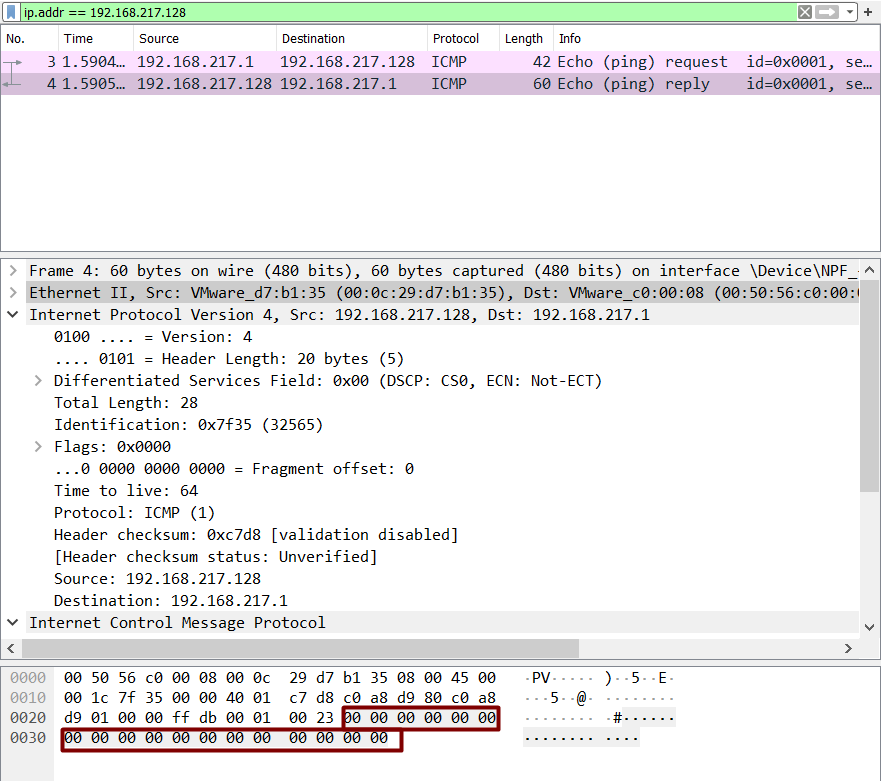 If we specify ping –s 0 in Linux machine, maybe we get some answer. 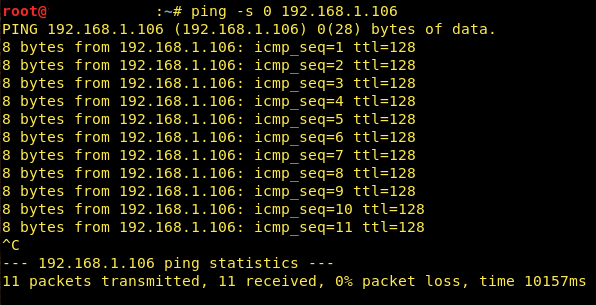 Okay, so in the terminal, we see “pinging with 0 (28) bytes of data” which means 28 bytes of IP plus ICMP header and 0-byte data. BUT, Wireshark shows us something size of 60 bytes and has again added an extra 18 bytes.

Turns out that these 18 bytes are Ethernet padding bytes and that’s why this anomaly has arisen. IEEE 802.3 adds extra bytes if data is less than 18 bytes in case of Linux known as padding bytes or pad bytes.

In Wireshark, we see the size is still 60 bytes. And 10 bytes have been written by the hex values from 0 to 9, while rest of them are still null bytes. 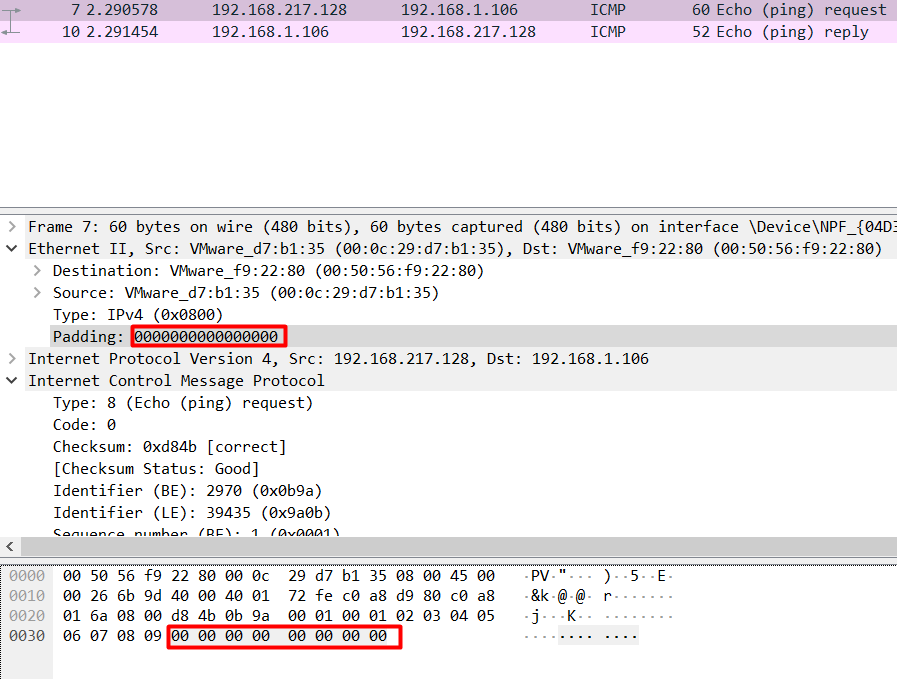 It is safe to say the same anomaly will exist when we specify data in the multiples of 1480 since the last fragment will have 0 bytes of data to be sent and padding would be added.

This was an interesting anomaly and made us understood some details of the IEEE 802.3 standards difference in Windows and Linux.