As logs never lie, it’s very important to aggregate and analyze the internal and external network logs constantly so that you can prevent a breach or perform incident response on time. In the previous article, we looked at the configuration and installation of AlienVault OSSIM.

The operating-system integration for AlienVault is based on window-centric for a Linux platform.

Let’s take a look at the involved process for gathering logs from Linux servers using AlienVault.

You can access the previous article from here: – AlienVault Lab setup

in this article, we will discuss how to send Ubuntu RSYS logs to the AlienVault server and the Manual configuration and installation of the SSH plugin.

So, without much theory let’s begin the integration process.

For the integration of Rsyslog and SSH plugin to AlienVault OSSIM, there are some minimum requirements as listed below.

Integration of Rsyslog and SSH plugin to AlienVault OSSIM

Rsyslog is a software that is used for forwarding log messages in an IP network. It implements basic Syslog protocol and extends it with content-based filtering capabilities. It also supports different module outputs, flexible configuration options and adds features such as TCP for transport.

Make sure the Port 514 (UDP protocol) is both on the ubuntu 20.04 server-side and AlienVault OSSIM server is open so that the logs can be forwarded via UDP on port 514

Open rsyslog.conf file and check whether it is including all configuration file or not

To do this enter the following command

Uncomment the following line to include all configuration files. 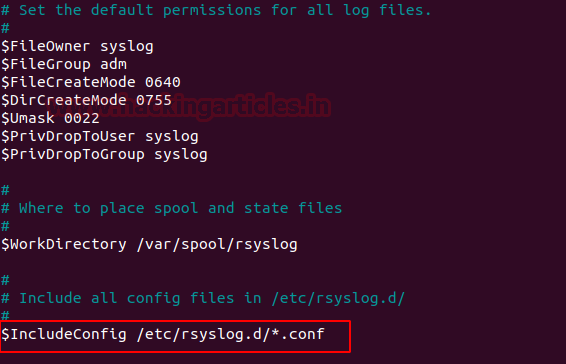 If this line by default is uncommented, then save and exit.

Now we forward the rsyslog logs to the AlienVault OSSIM server.

Create a new configuration file named alienvault.conf and add the following line as shown below:

To make the changes effective restart rsyslog service by the following command: 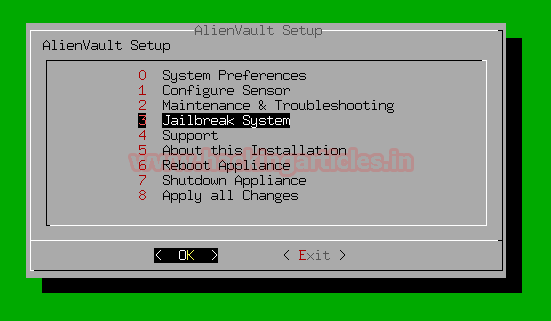 On the next prompt, it will ask you for permission to access the full command line select yes and continue. 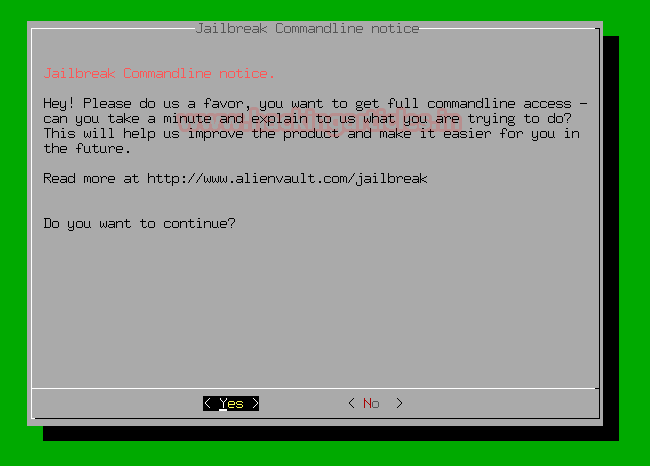 Here we’re using tcpdump on the OSSIM server to see log communications between Ubuntu 20.04 and OSSIM by running tcpdump to capture the logs with the following command:

Let’s verify whether it is receiving logs from Ubuntu 20.04 server or not

In the ubuntu machine, I m switching users by running the following command, and then after we will see the logs of switching users are reflected on the OSSIM server or not.

Come back to the OSSIM server

Hurrah !!! as we can see the log from the Ubuntu server has entered into the OSSIM server, then now we will redirect the logs sent to OSSIM into a file.

Now we’re going to configure the Filtration in the Rsyslog.

Head towards the rsyslog.conf file in the directory etc.

In the section GLOBAL DIRECTIVES, the line “$IncludeConfig /etc/rsyslog.d/*.conf” by default it includes the whole config file of the system. 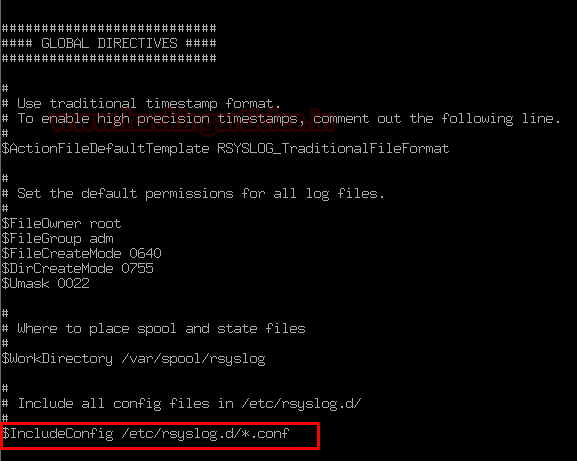 To filter specific rsyslog configurations and logs put some specific name  on the place of * to filter it easily as shown below: 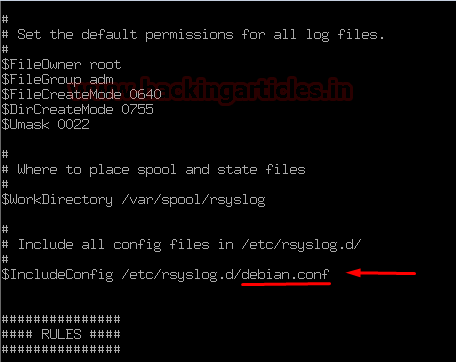 Now head towards to directory of rsyslog.d and create a configuration file debian.conf

And enter the following rule into it:

Then save and exit as shown below

Now we check that the logs of the ubuntu server are inserted correctly in auth.log or not.

Before we do rsyslog restart and then follow the below steps:

Now we move on to the AlienVault part

OSSIM needs a plug-in t to connect any data source to the server. Plugins have XML based configuration.

The plugins have two elements: cfg and SQL

To do this head towards the directory /etc/ossim/agent/plugins

in the directory of plugins, there are lots of plugins available that can be activated in OSSIM

we went on to modify one by hand for example SSH

To do this run the following command:

Then after open the debianssh.cfg configuration file.

And change the plugin id with your desired no. to make it identifiable for the further process. 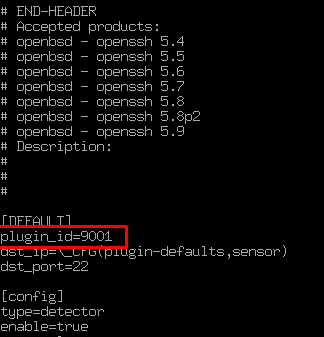 Now we can activate the plugin

Come back to AlienVault setup by entering the following command:

And then configure the sensor by the below steps: 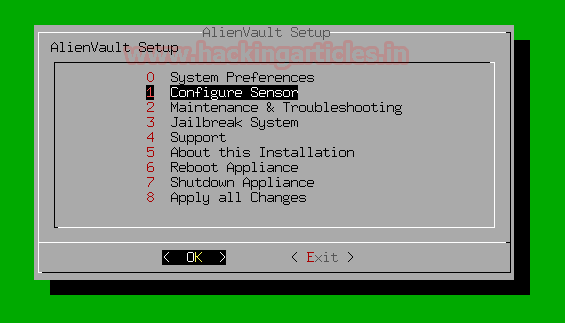 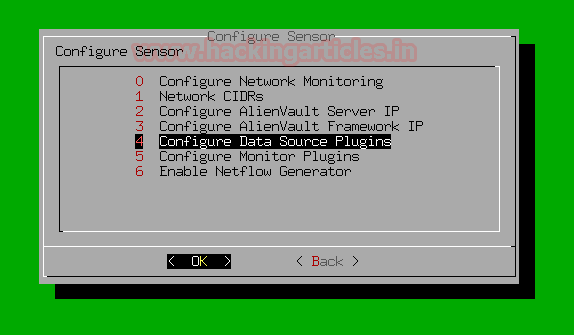 In the previous steps, we modified an SSH plugin into debianssh plugin. Select it in the list of plugins by pressing spacebar as shown below 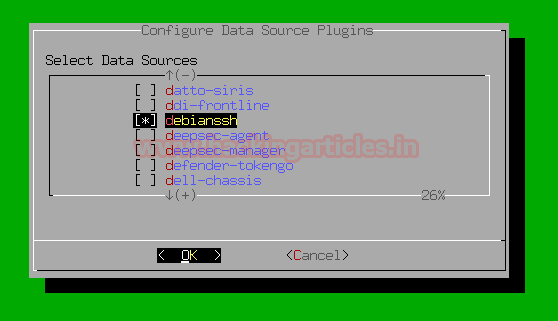 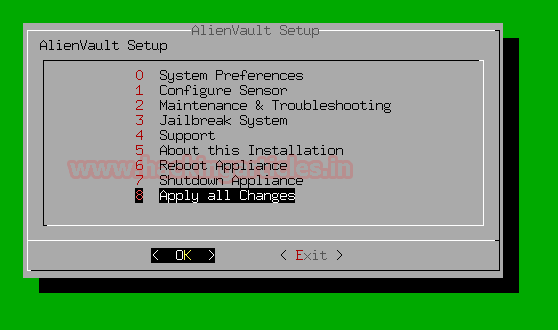 At last, it will ask for your permission to apply all changes

Select yes and then continue

On the next prompt, it will show you changes applied 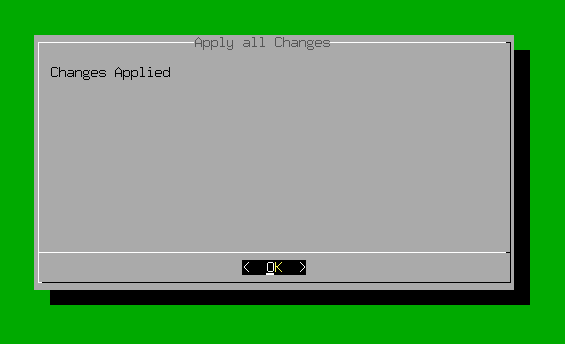 Let’s go to configure the SQL part of the plugin.

we’re going to copy the ssh.sql to debianssh.sql by running the following command:

Let’s do some modifications in the configuration file so that it can match the plugin.cfg to the SQL database. 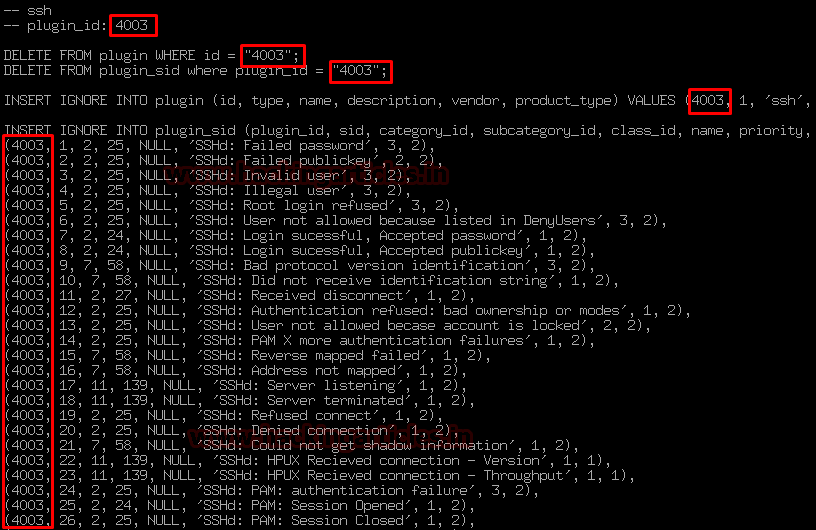 Change the plugin id 4001 to 9001 or somewhat the value of no. that you designated in the upper section as shown below: 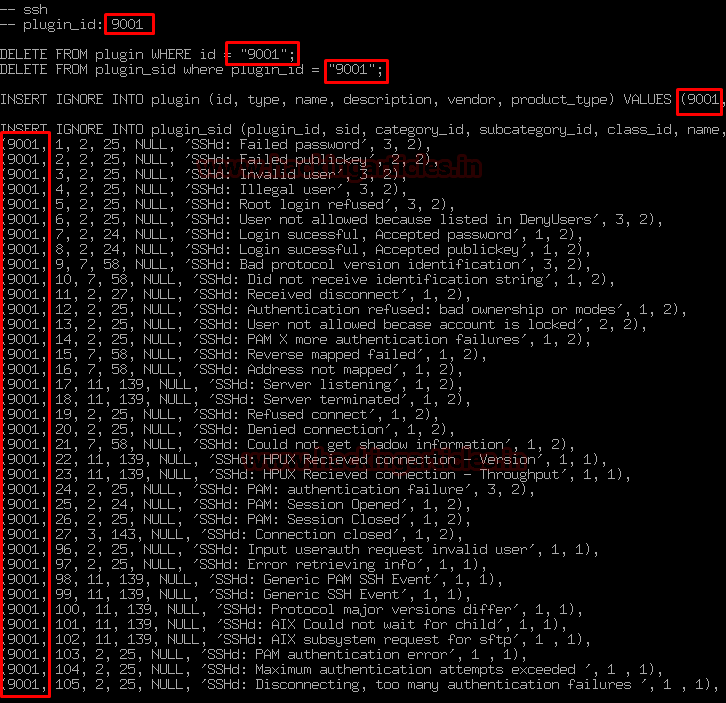 As you can see this configuration file contains a predefined database of SSH logs so that if any suspicious SSH activity or request comes to the Ubuntu server it can match with that request.

And then Save and exit from the file.

Let’s put it into the action and activate the database be reconfiguring it.

To do this enter the following command: 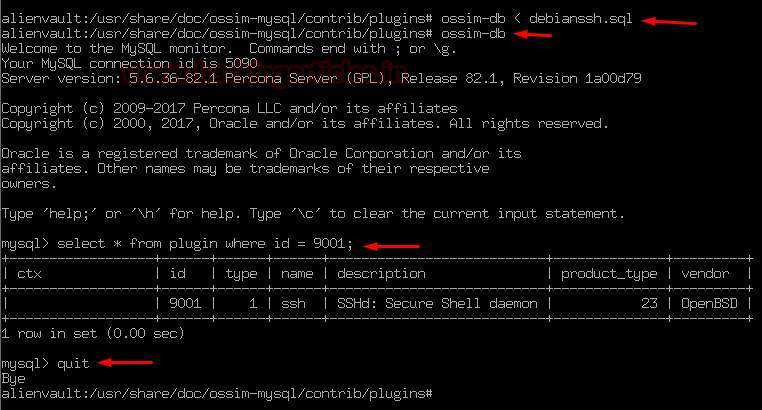 And at last reconfig the AlienVault OSSIM server by entering the following command:

On the next screen, it will start reconfiguring the server

If you are seeing this then congratulations…!!!

You successfully integrated Rsyslog and SSH plugin to the AlienVault OSSIMa server.

Hold tight! this is not enough…..

In this article, we explained the integration and configuration process of Rsyslog and SSH plugin to  AlienVault OSSIM.

In the next article, our focus will be on the configuration and installation of OSSEc Agents that send logs to AlienVault Server.