In our previous article, we learned how to configure Memcached Server in Ubuntu 18.04 system to design our own pentest lab. Today we will learn multiple ways to exploit Memcached Server.

Boot up your Kali Linux machine and do a simple nmap scan first to check whether the target machine is running Memcached Server or not.

As you can see in the above image, Memcached is running in the target machine and the port 11211 is open. 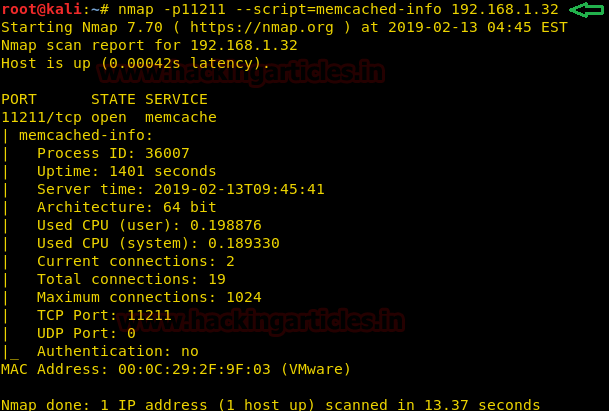 As you can see in the above image, nmap script command fetched us some crucial information about the Memcached server such as process ID, Uptime, Architecture, MAC Address etc.

Now, let’s try to connect the Memcached server using telnet by typing in the commands given below.

Type in a command version to do a version scan of the Memcached Server.

The above data represents that the version of Memcached is 1.5.6 and it is running in a Ubuntu machine.

Now, let’s get straight to fetch the valuable data stored in the server. Type the command shown below to print all the general statistics of the server. 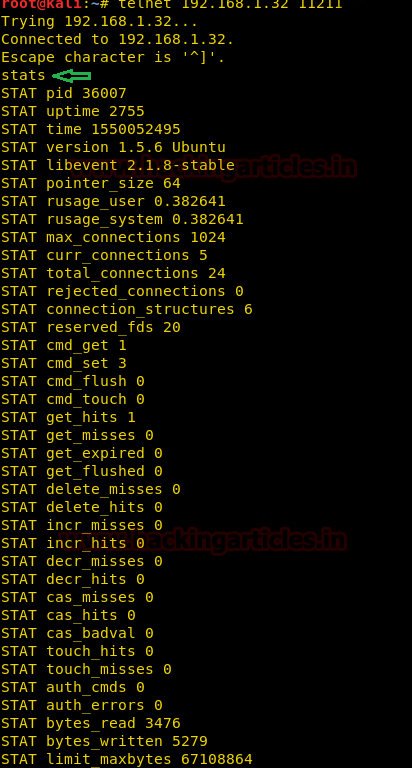 The above information shows the current traffic statistics. It serves the number of connections, data is stored into the cache, cache hit ratios and detailed information on the memory usage and distribution of information through the slab allocation used to store individual items.

Now, we will run another command to fetch the slab statistics. Slabs are created and allocated for storing information within the cache. Run the command shown below. 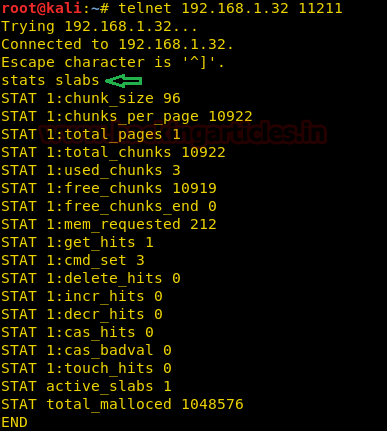 As you can observe in the above image, currently there is only one slab present in the server whose slab number is 1. 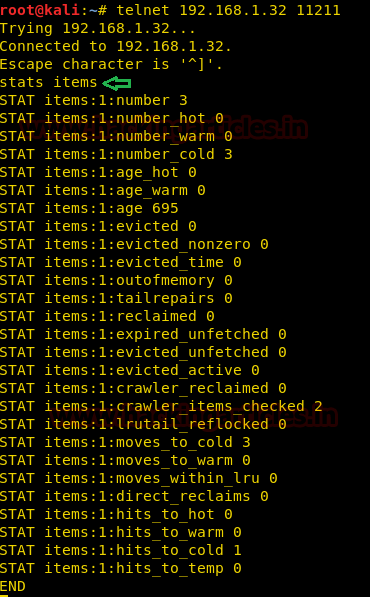 The above image gives us an insight into how the data is organized in slab ID 1.

Now, let’s run the command below to dump all the keys present in a particular slab.

Here 1 and 0 are the parameters,

0 = It represents the number of keys you want to dump, 0 will dump all the keys present in the slab ID respectively.

Now, we can simply use the get command to fetch the values stored in the keys as shown below. 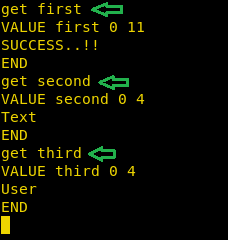 As you can see in the above image, we have successfully dumped the data stored in the key values.

Dumping of data using this toolkit makes the work a lot easier. So, let’s start by installing libmemcached-tools in our system by typing in the following command. 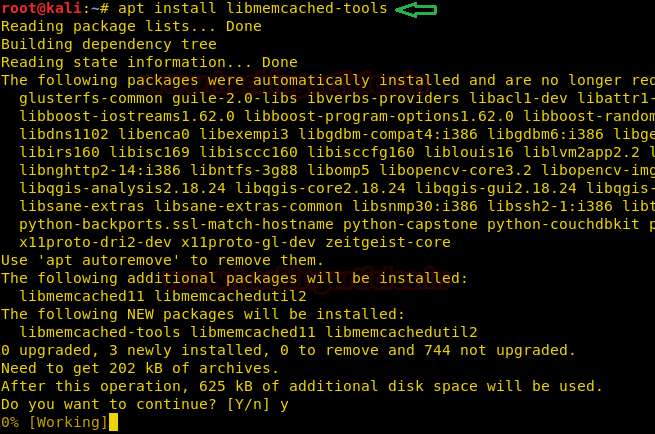 Now that we have installed libmemcached-tools let’s start using it by typing in the following command.

The above command will give pretty much the same result as the stats command which we had used earlier while fetching the server statistics manually.

Now, let’s get straight to dumping the key values stored in the server. Run the command given below.

As you can see in the above image, we have dumped all the keys present in the server currently.

Now, let’s dump all the values stored in the keys respectively. Run the command shown below.

The above command fetched us all the data stored in the respective key values. An attacker can use libmemcached-tools to easily upload any malicious file to the server too. Here, we will be showing an example of how to upload a file in the server.

Type the command shown below.

Here, the memccp command is uploading a file named “file.txt” present in the root directory of our system. Now, let’s use memcat to view the content of the file which we have uploaded in the server.

As you can see, the above command fetched us the content of the file.

As we all know, no exploitation is complete without using the Metasploit Framework once. So let’s dig in and see how we can exploit Memcached using Metasploit.

Fire up the Metasploit Framework and search Memcache.

The above image shows that there are currently 4 auxiliaries present in Metasploit.

We will be using auxiliary/gather/memcached_extractor to fetch the keys and the values stored in it. Run the command given below.

Once you have successfully imported the auxiliary in the Metasploit Framework, just set the rhost and then run the auxiliary. We know that Memcached stores data temporarily. So the above image shows that the auxiliary had fetched us both the Key and the Value currently present in the Memcached Server and stored it in its default location /root/.msf4/loot/20190218044841_default_192.168.1.35_memcached.dump_286171.txt

Watchers are a way to connect to Memcached and monitor all the actions being performed internally.

Now connect the Memcached using telnet and type the command shown below.

The command line OK indicates that watcher is ready to send logs.

As you can see in the above image, all the actions which are being performed in the server are shown here live.

One thought on “Penetration Testing on Memcached Server”