In this article, we will be focusing on shellbags and its forensic analysis using shellbag explorer. Shellbags are created to enhance the users’ experience by remembering user preferences while exploring folders, the information stored in shellbags is useful for forensic investigation.

Windows Shell Bags were introduced into Microsoft’s Windows 7 operating system and are yet present on all later Windows platform. Shellbags are registry keys that are used to improve user experience and recall user’s preferences whenever needed. The creation of shellbags relies upon the exercises performed by the user.

For the most part, Shell Bags are intended to hold data about the user’s activities while exploring Windows. This implies that if the user changes icon sizes from large icons to the grid, the settings get updated in Shell Bag instantly. At the point when you open, close, or change the review choice of any folder on your system, either from Windows Explorer or from the Desktop, even by right-clicking or renaming the organizer, a Shellbag record is made or refreshed.

The shellbags for Windows XP are stored in NTUSER.DAT

Shellbags are a set of subkeys in the UsrClass.dat registry hive of Windows 10 systems. The shell bags are stored in both NTUSER.DAT and USRCLASS.DAT.

The majority of the data is found in the USRCLASS.DAT hive-like local, removable, and network folders’ data. You can manually check shellbags entry in the registry editor like so. In the following screenshot, a shellbag entry for a folder named jeenali is shown. 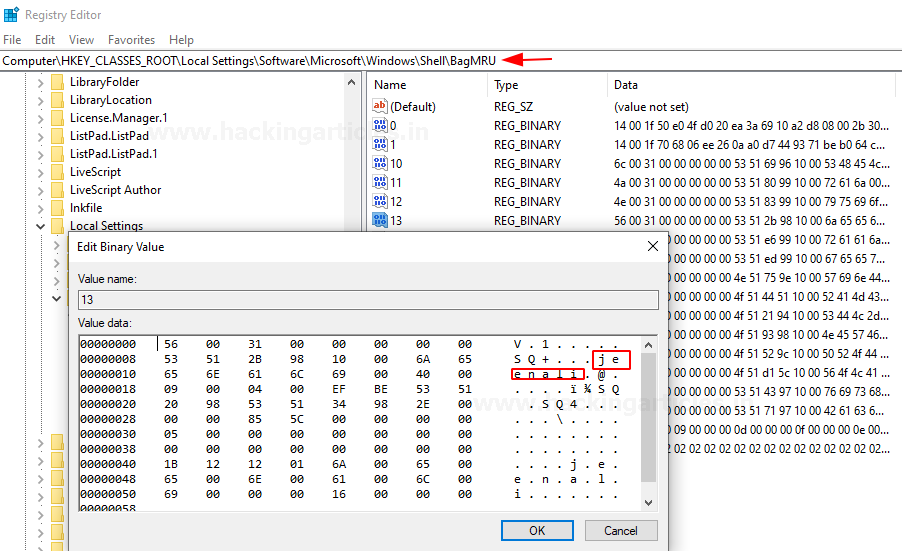 Here we are using the SBECmd.exe (Cmd version of the shellbag explorer tool) by Eric Zimmerman. This cmd tool is great for command prompt lovers who prefer using commands over GUI.

To get a clear idea about how shell bags work and store data and how you can analyze it I have created a new folder named “raaj” which consists of a text document. Further, we will be renaming it to geet and then to jeenali. Let’s analyze the shellbags entries for this. 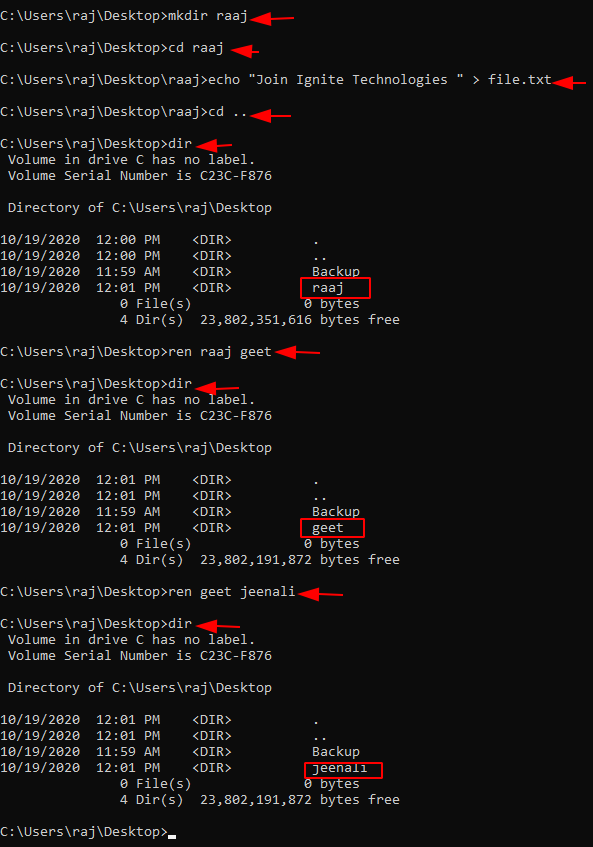 Run the executable file and browse to the directory where the executable is present. To extract the shellbags data into a .csv file use the following command: 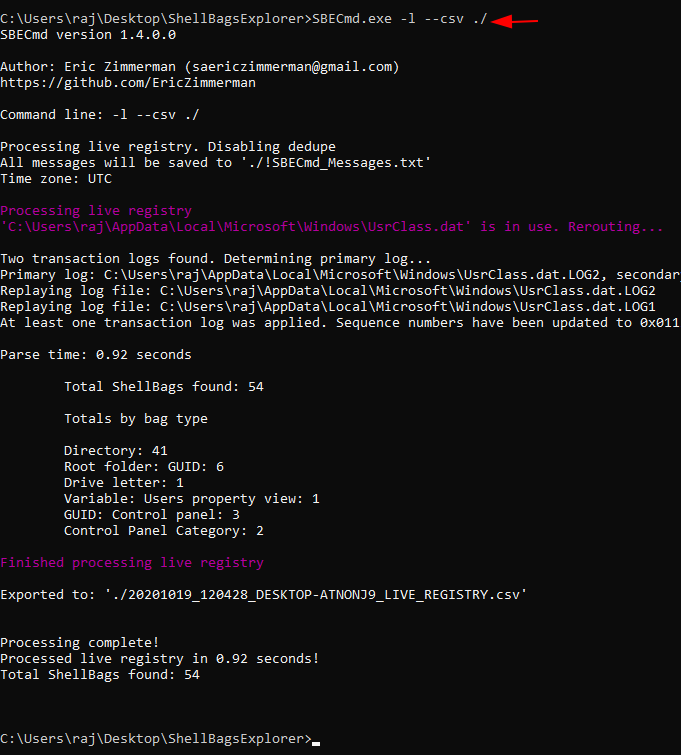 As a result of the above command, a .csv file will be created in the directory.

Lets’ open the .csv file and analyze it. 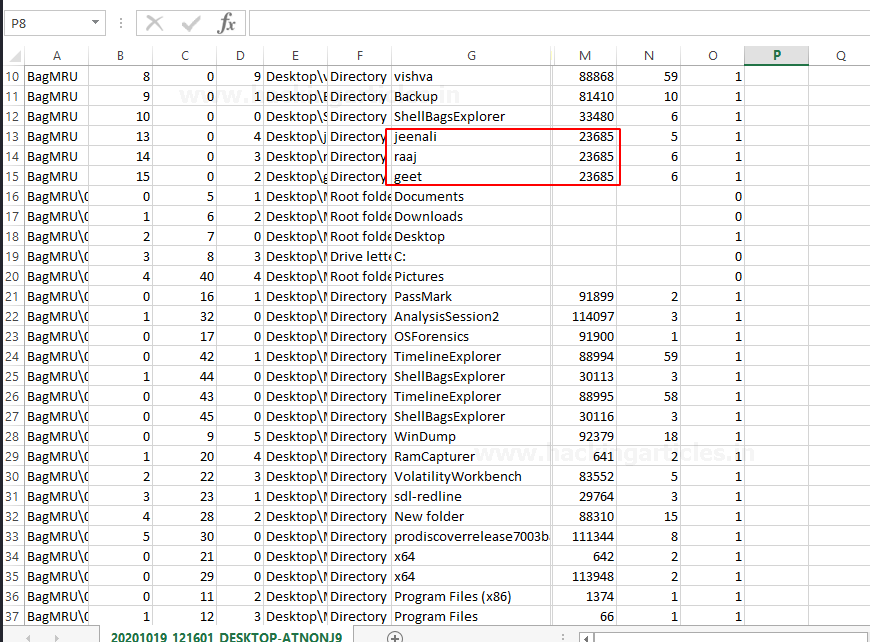 As I mentioned earlier, we have renamed the folder named “raaj” to “geet” and further to “jeenali” as highlighted in the screenshot the MFT entry number is the same for all three folders which depict that the folder was renamed. 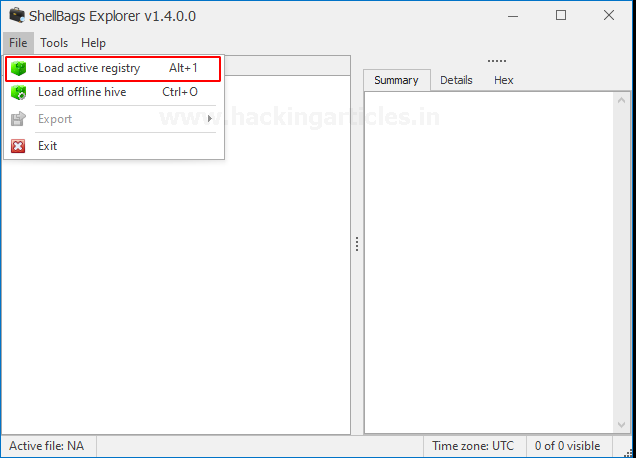 The shellbags are successfully parsed from the active registry. 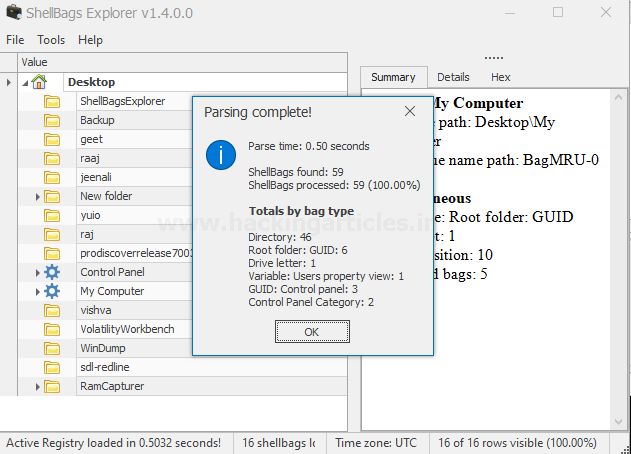 The shellbags parse contains the shellbags entries created based on users’ activities. As depicted earlier the folder renamed will have a similar MFT entry number. Here, I have created a folder named “raaj” and we will be further renaming it to “geet”. 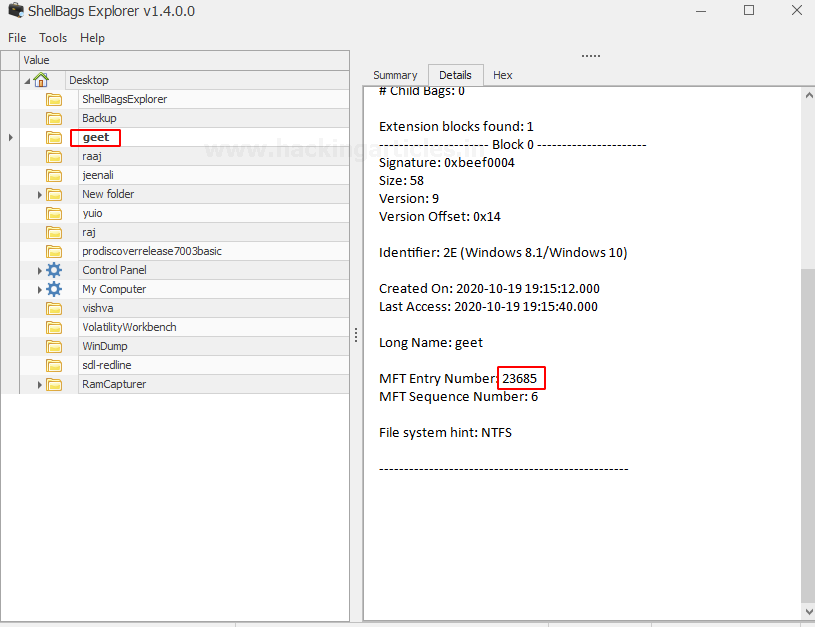 Whenever a folder is renamed an entry is stored in shellbag, the MFT entry number of both the folder will be the same. 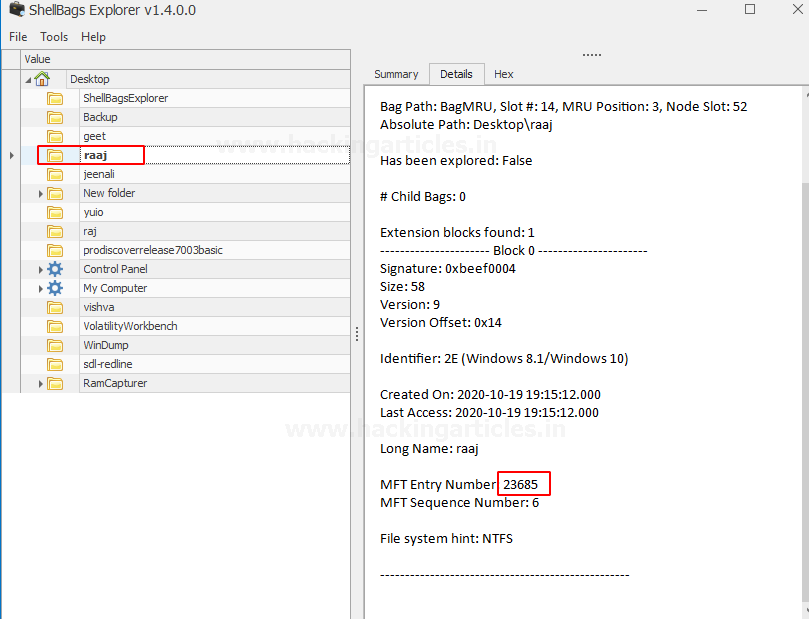 Now, once again rename the folder to jeenali. The MFT entry will be similar to the previous one. 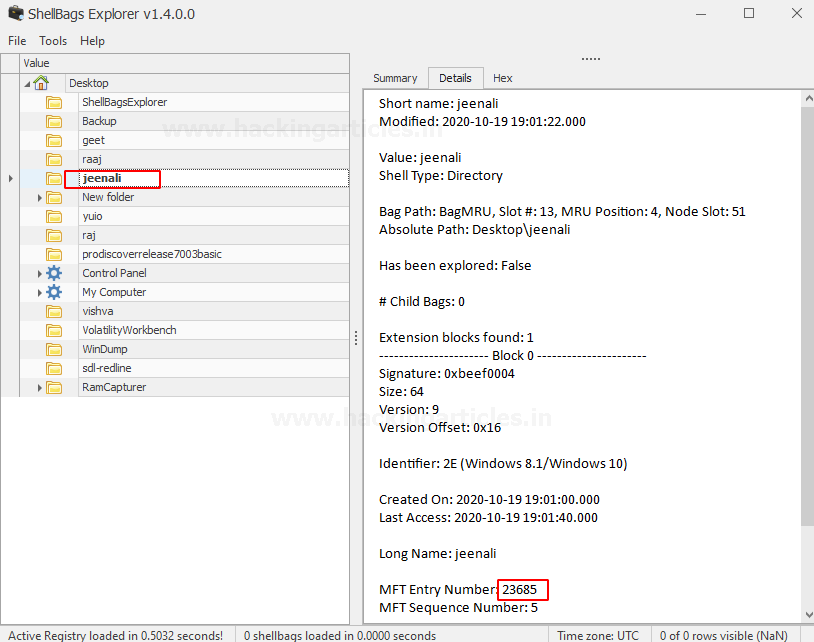 Lets’ add in the evidence, go to the add evidence item. 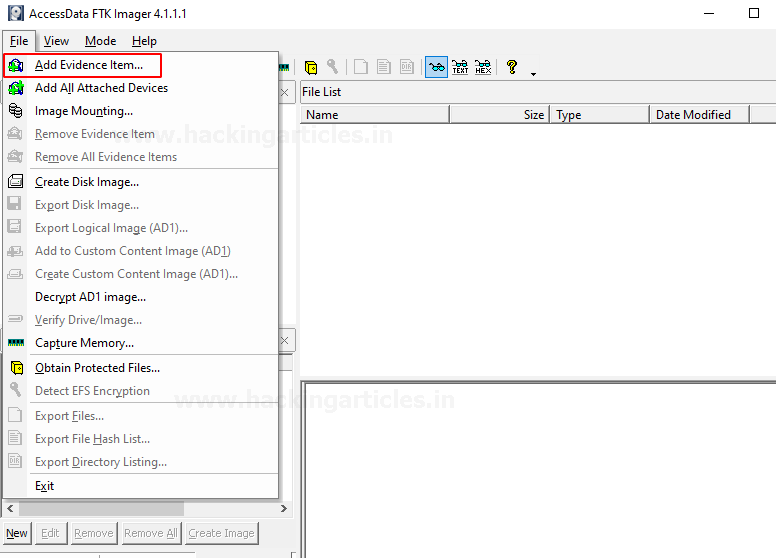 Select the source for adding evidence as here I have selected the logical drive as usrclass.dat is present in the C drive. 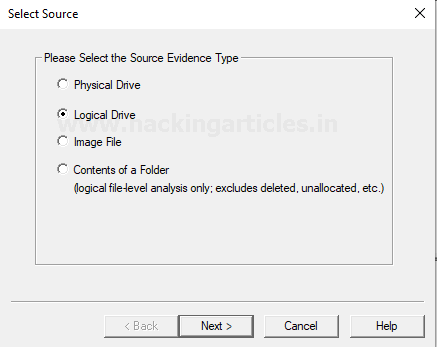 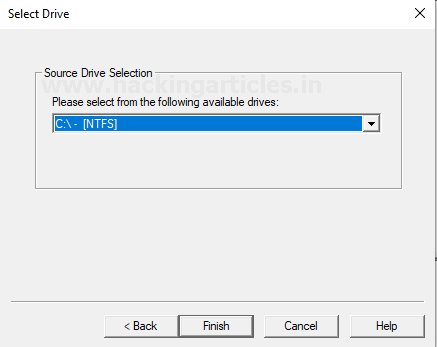 Expand the window to the location of the usrclass.dat. Select the user you want to investigate go to the following path to extract the UsrClass.dat. 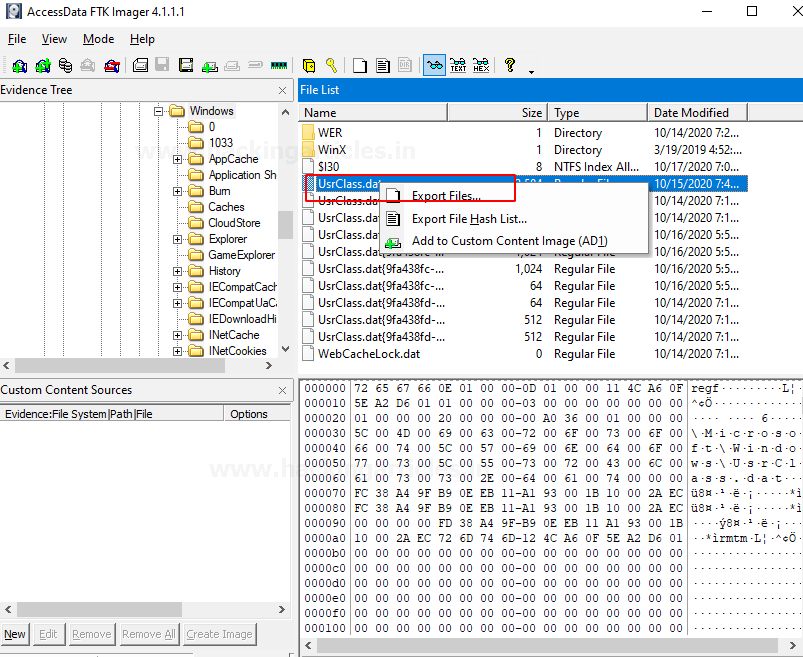 We will be analyzing the usrclass.dat extracted from the above step using shell bag explorer by Eric Zimmerman. 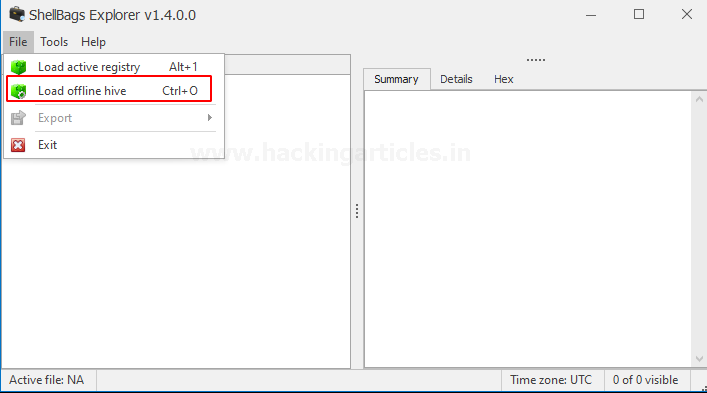 After successful parsing of the extracted shellbags file, you will be able to see the entries for folders browsed, created, deleted, etc. Here is the entry of the folders renamed earlier, the MFT entry number is the same for the three folders. 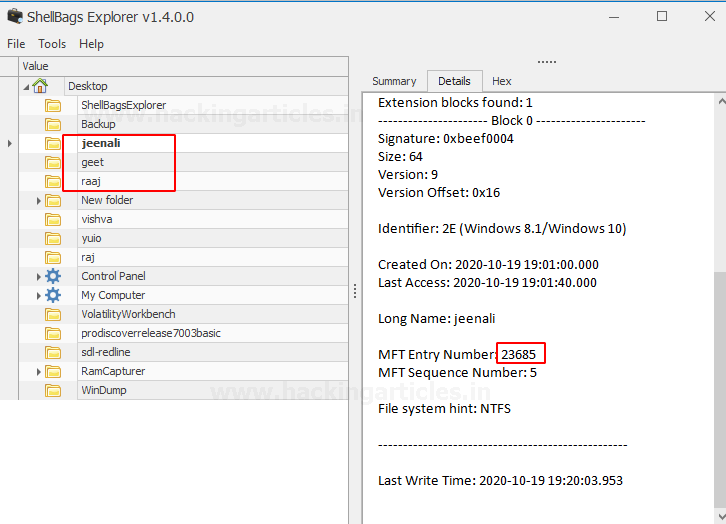 Now here, I have deleted the folder named “jeenali”. Now lets’ check the shellbags data whether the deleted folder still exists or not. 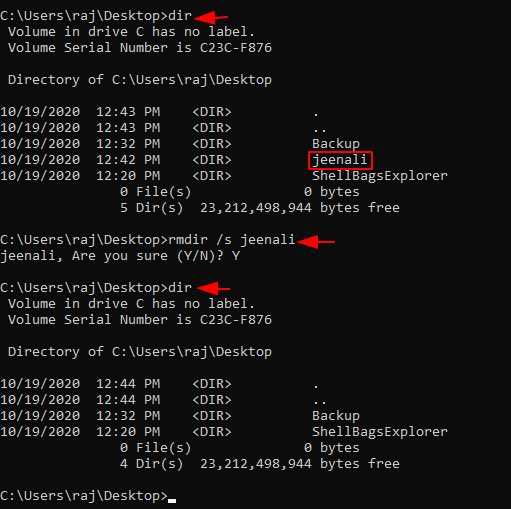 Yes, the shellbags store the entry even though the folder was deleted later. 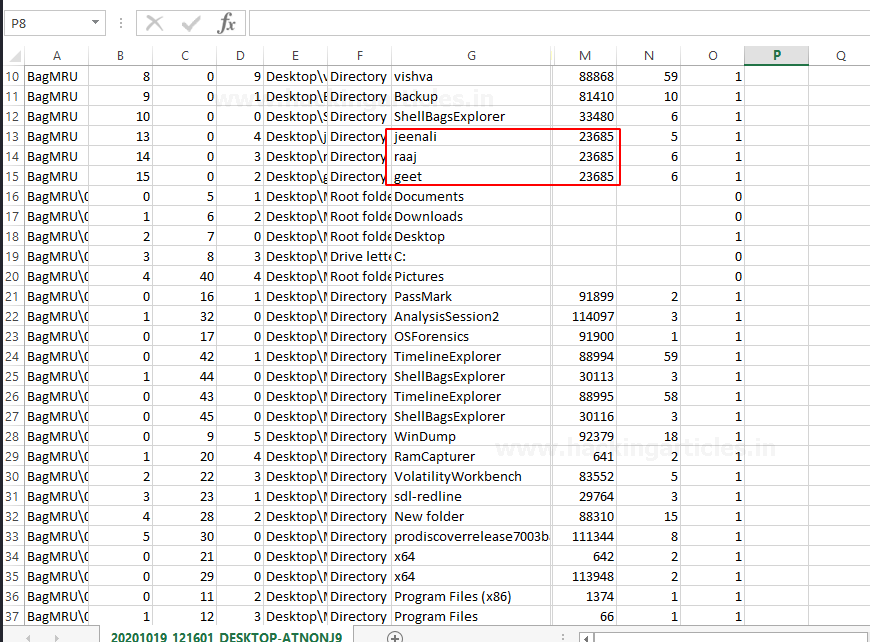 Shellbags stores the entries of the directories accessed by the user, user preferences such as window size, icon size. Shellbags explorer parses the shellbags entries shows the absolute path of the directory accessed, creation time, file system, child bags. The tool classifies the folders accessed according to the location of the folder. Shellbags are created for compressed files (ZIP files), command prompt, search window, renaming, moving, and deleting a folder.

Author: Vishva Vaghela is a Digital Forensics enthusiast and enjoys technical content writing. You can reach her on Here

One thought on “Forensic Investigation: Shellbags”