The AutoRecon tool is designed as a network reconnaissance tool. It is a multi-threaded tool that performs automated enumeration of services. The purpose of this tool is to save time while cracking CTFs and other penetration testing environments or exams. It is useful in real-world engagements as well.

The AutoRecon works in a sequential process. Initially, it performs port scans or service detection scans. Then using the results of these scans as a reference it further launches enumeration scans of those services using other tools. For example, if HTTP is found, it will check for webpages and if it will get those, it will start Nikto scan with go buster and other tools concurrently.

The tool itself is designed to be personalized by making changes in the configuration files.

There are multiple methods to install AutoRecon. Users can run it on a Docker Instance. It can be used by a small fraction of people that don’t use Kali Linux or any other Linux Distribution. To install using Docker please refer to the GitHub page of the AutoRecon. We are focusing on the installation methods with pipx. It is the recommended method by the developer of the tool and it works like charm. Before Beginning the Installation there are a few requirements in order to run AutoRecon. The AutoRecon is build on Python 3. It will not run-on Python 2. This is because it uses a library called asyncio which is not supported in earlier versions. If you don’t already have it installed, you can do it by running the following commands as root. We are installing the pip for python3 as well to install any additional packages.

After this we will use pipx, to manage the python packages; This will take the packages that we install and put them inside their own virtual environment. This will avoid any conflicting packages inside your machine. First, we will be installing the Virtual Environment using Python3.

Now we will make changes to the PATH Variables to add pipx. After completion, we will need to reopen the terminal so that it can take effect.

AutoRecon takes a lot of different tools and runs them on the target defined by the user. Although most of the tools are present in Kali itself let’s install or update those tools to use AutoRecon in its full glory. As the seclists is quite large in size more like 386 Megabytes so that is going to take some time.

The command to install or update these tools is mentioned below:

Now that all the pre-requisites are installed, all that is needed to do is install the AutoRecon directly from its GitHub Repository using pipx. Very simple syntax to use as it can be observed.

As discussed earlier, AutoRecon is an Enumeration tool. It requires a target or a set of targets. This can be IP Addresses, or CIDR Notations or hostnames as well. When triggered with the -h parameter it shows the user a help screen as depicted in the image below. It tells us that we can provide a target directly or if you have multiple targets. Then you can put the target IP Addresses into a file and then pass it as a parameter with the -t flag. 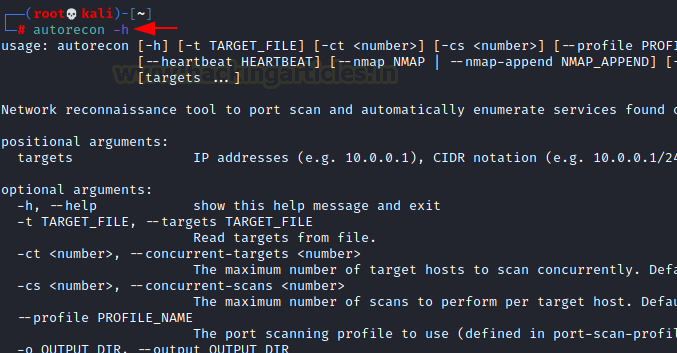 As we saw earlier that AutoRecon has a large number of parameters but most of these can be left default. The key thing to remember is the required argument “target”. It can be a space-separated list of either IP Addresses or CIDR Notations or even resolvable hostnames. We can also create a file with the targets in it. It should be in the format of one per new line. We need to reference that target file using the -t argument. 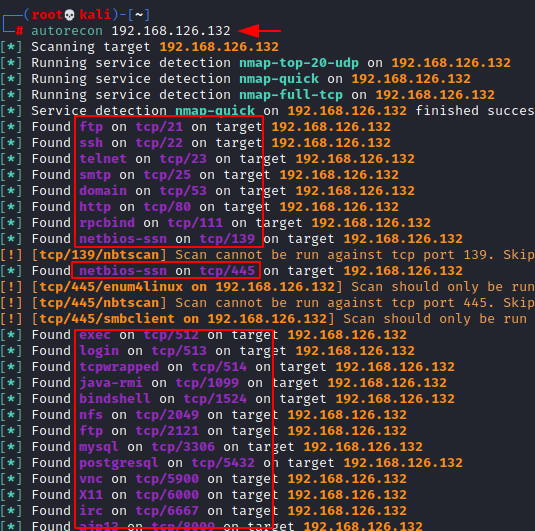 By default, AutoRecon will scan 5 target hosts at the same time but that number can be toggled using the -ct parameter. This is basically the number of targets getting scanned at the same time. To demonstrate, we collected some IP Address in the network and then entered them into a text file. Then used that text file to provide targets to AutoRecon. 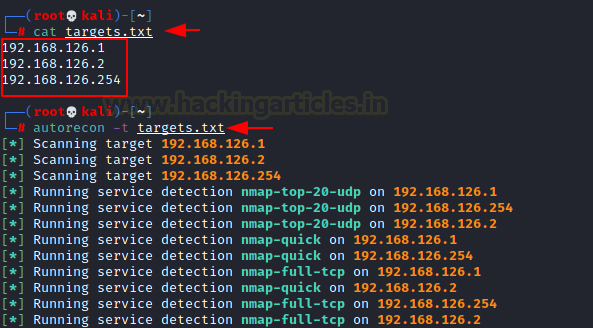 Another parameter to look at is the -cs which is the Concurrent Scans. This is basically the number of scans that are being performed per target. By default, the setting is set to 10. When changed to any other value such as 2 then only 2 scans will be performed per host. Once it is finished it will run another instance of the scan.

Hence, each of the targets that are being scanned will at least have 3 nmap scans running, basically a full TCP, a top 1000 TCP and a top 20 UDP. 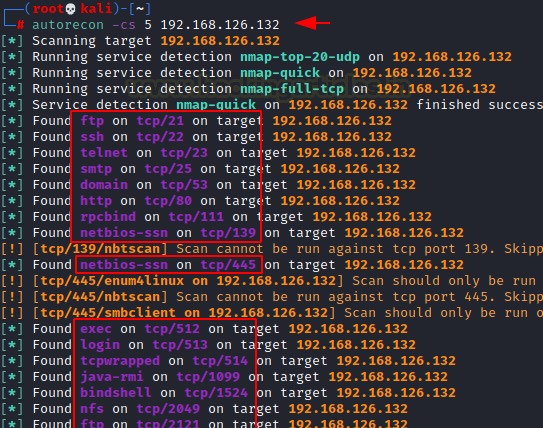 The –single-target argument enables the users to scan the host but changing the directory structure. It means that the AutoRecon will only scan the target but no directory will be created for that particular target.

Due to the use of the –single-target parameter, it didn’t create a directory by the name of the target inside the results folder. 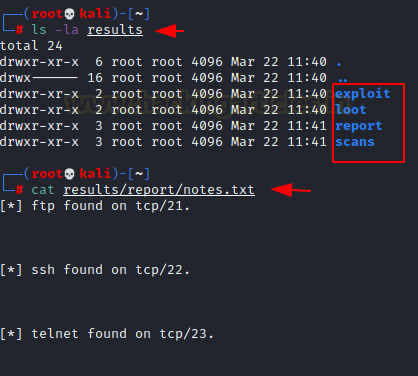 The –heartbeat argument allows the users to configure the duration of the updates that are provided by AutoRecon. By default, it is 60 seconds. It means AutoRecon will update the user what is going on and which scans are running every 60 seconds.

Now here we have two options, we can either replace our own parameters instead of the ones that are provided here, by using the –nmap argument and passing the parameters that we want to perform.

In the previous step, we added the -sV argument to the nmap scan, now in order to check we will read the commands.log file to see that it indeed uses the -sV parameter while scanning. It should also be noted that the default parameters -vv, –reason, -Pn are not used.

Let’s again check if the argument we added i.e., -sS has been appended with -vv, –reason, -Pn. It can be confirmed form a detailed read of the commands.log file. 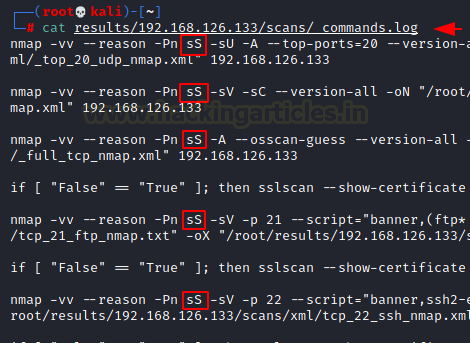 AutoRecon has different levels of verbosity. By default, it doesn’t run with any verbosity that means it just informs the user when it initiates a scan and when the scan finishes, it does not provide any details regarding those tasks. With the -v argument, it will be telling the user more about the scans like it will show the complete commands it is running, it will also provide more information about the services that were detected and are being further enumerated. 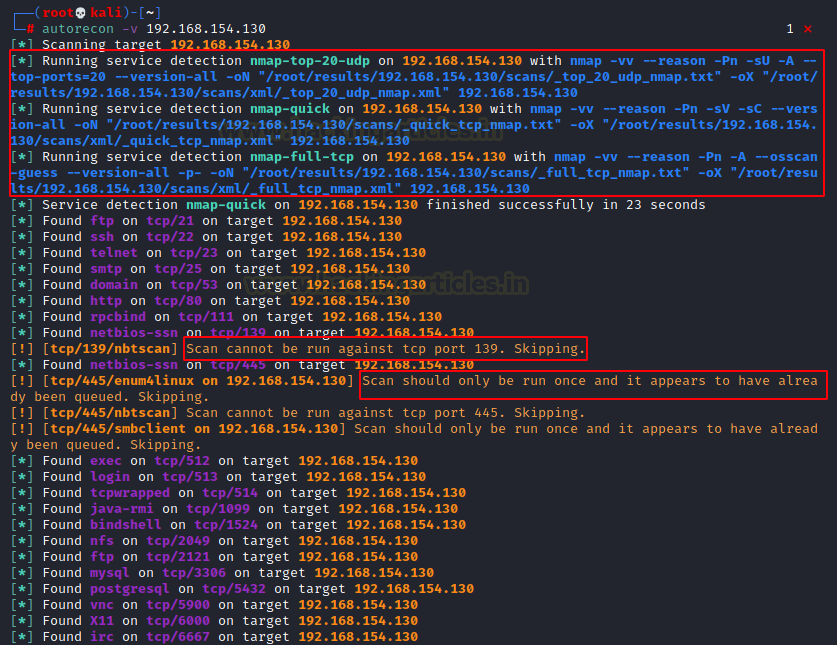 You can also use -vv which stands for Very Verbose. It is not recommended as it will print all the scans and their results in real-time. It clutters up the screen with too much information. 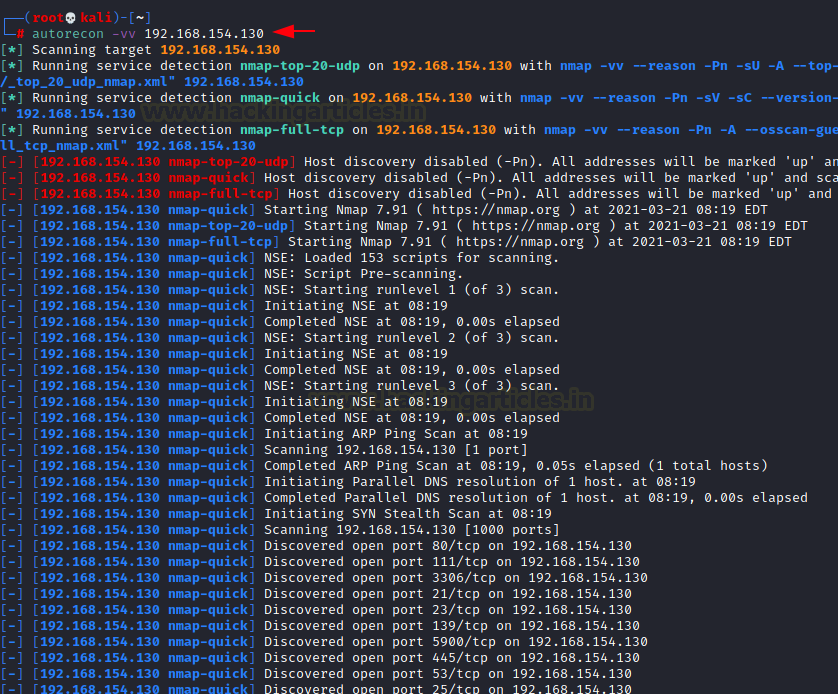 AutoRecon creates a bunch of directories based on the type of evidence it collects. But there are some situations where all that is required is the scan results. This is where the Only Scans Dir argument comes into action. This prevents the creation of other directories.

Here, we can see that inside the results/target directory we have only one directory by the name of scan which will contain the scan results. Talking about the results, let’s discuss the results that AutoRecon produces in detail. 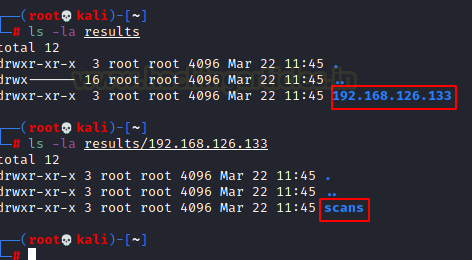 AutoRecon when initiated with a scan, it creates a result directory. The name of the directory can be configured using the -o parameter. If no parameter is mentioned, it will create the results directory in the current folder. Inside the results directory, it will divide into the different targets. Suppose you scanned like 4 IP Addresses, it will create 4 directories with the IP Address as name. You could go inside any one of them to find different directories created according to the nature of the finding. So, the exploit directory would have any particular exploit that the target is vulnerable to. Although keep in mind that the exploit will have to be surely working. It means that it won’t show up if there is some suspicion that the exploit will work or not. The absolute surety will create entries inside that directory. Then we have the loot directory it will be anything the AutoRecon grabbed from the host machine. Repot would be the stuff that could go into a Penetration Testing Report for example notes etc. 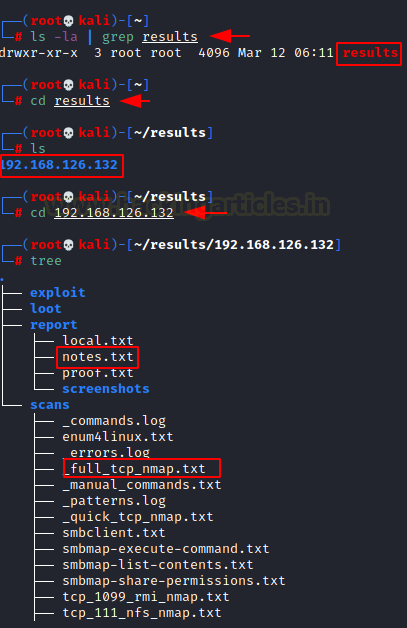 We can see that the notes inside the report folder contain the basic findings that were detected by the Nmap. It shows different services that were found running on the target application using AutoRecon. It can be used as a kind of quick reference guide. 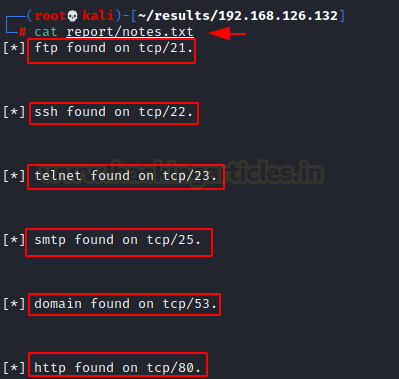 If we look further, we have the full nmap scan report. 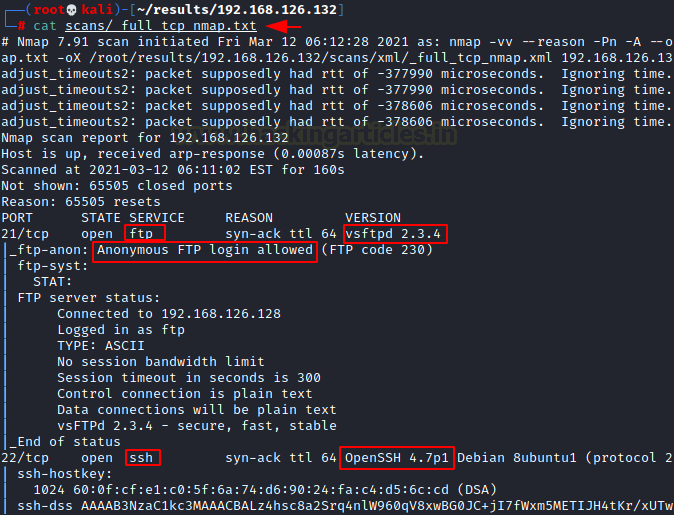 It also runs the Enum4Linux scan upon detecting the operating system like Linux. The result for this scan is located at the following location: results/<targetname>/scans/enum4linux.txt 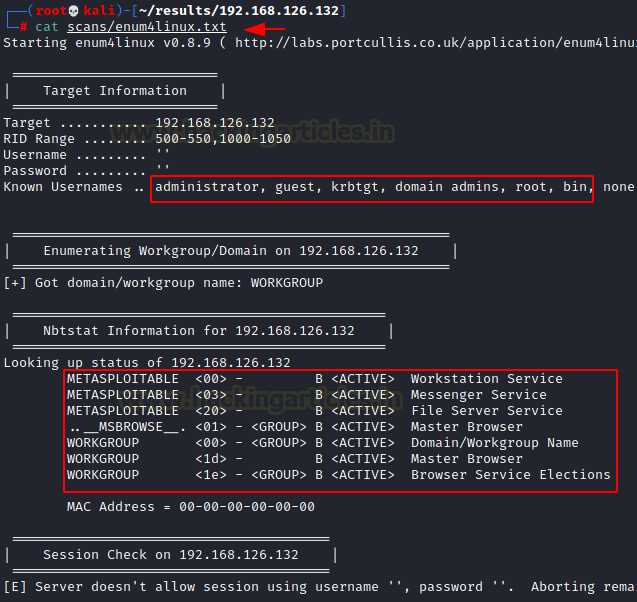 Among other scans, AutoRecon also conducts SMBMap upon find the SMB service running on the application. SMBMap enumerates the different shares on the network by the target machine with the allowed permissions on that particular share. This scan result is located at the following location: results/<targetname>/scans/smbmap-share-permissions.txt 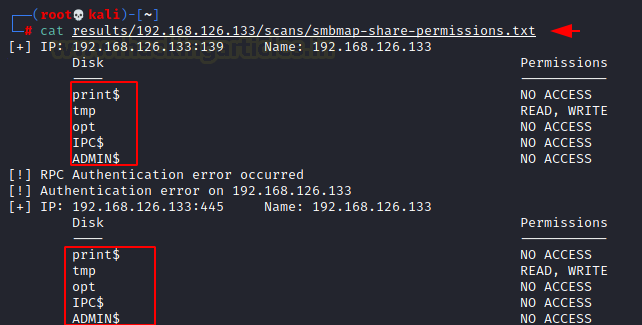 A simple enumeration for the SMTP users is also performed using the script called smtp-user-enum. It is performed in case the SMTP service is detected on the target machine. It enumerates for the users that created on the SMTP instance. In our demonstration, we found that there are 4 users that exist on the target server. The result for the enumeration scan can be found at the following location. results/<targetname>/scans/tcp_25_smtp_user-enum.txt 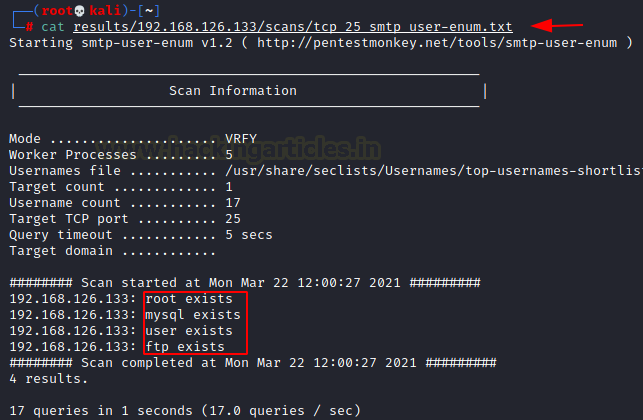 Another one of the scan results to look for is the WhatWeb enumeration scan. It uses the WhatWeb functionality to grab the banner on various services and then analyzing the versions and releases of the various web-based services and frameworks. The result for the WhatWeb scan can be located at the following location: results/<targetname>/scans/tcp_8180_http_whatweb.txt 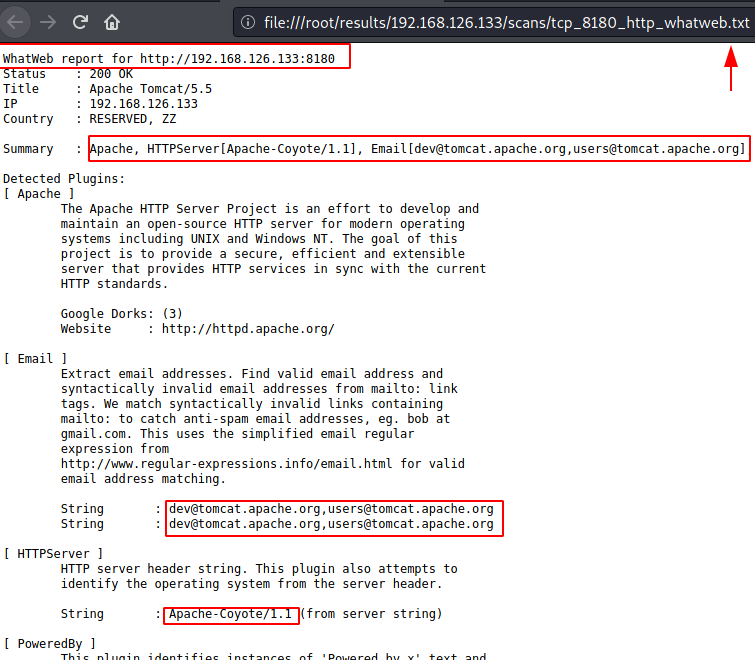 AutoRecon also crafts a few results in the XML format for a clean and easy read. One of them results in our demonstration is the Nmap Scan for the FTP service. The XML result for the WhatWeb scan can be located at the following location: results/<targetname>/scans/xml/tcp_21_ftp_nmap.xml

All the scans that the AutoRecon additionally run are very useful in any Penetration Assessment but Nikto is one that might do the most enumeration as it after Nmap if any tool that can extract more data is Nikto. The scan result for the Nikto scan is located at this location: 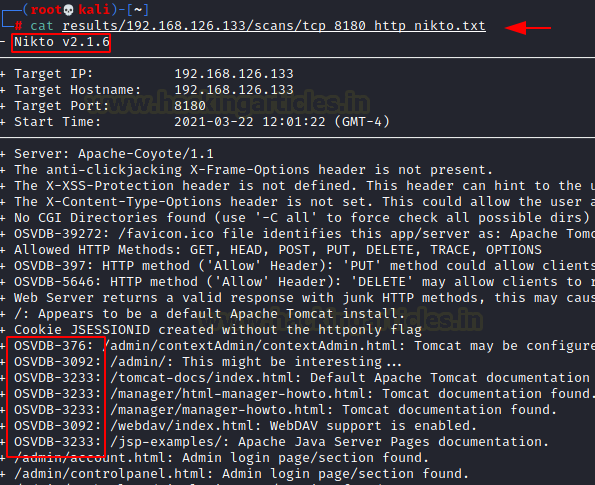 When faced with an HTTP service that might contain webpages, AutoRecon snaps a screenshot of the webpage. In our demonstration, there was a HTTP service running on port 8180. It was the Apache Tomcat default page. This is super helpful when solving CTFs as we need to take a look at the web services. This way we can know if it is worth browsing web service or not. 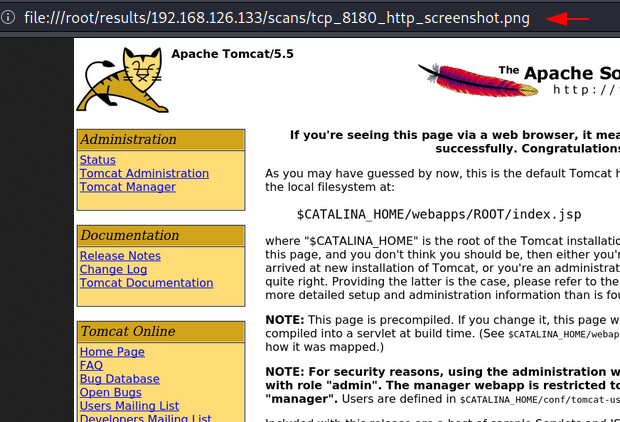 2 thoughts on “Comprehensive Guide to AutoRecon”