In this article we will be going to learn the how to capture the RAM memory for analysis, there are various ways to do it and let take some time and learn all those different circumstances call for a different measure.

RAM is short for Random Access Memory. It is referred to as the main memory of a computer which makes it quite important for a computer to run. RAM allows the user to temporarily store data in the system which one is using or is about to use. But as RAM is volatile, all the data stored in RAM will be lost as soon as the power goes out. RAM is both readable and writable which make it easy to access and user-friendly. The importance of RAM is that it makes your system faster as storing in your hard drive takes a lot of time as well as a toll on your system. RAM is also useful to save and redeem data from the system. All in all, you can conclude that RAM helps to improve the performance of your device.

Benefits for capture the memory

Capturing RAM important task as over the time investigators have realized that many types of facts can be covered in volatile memory and evidence can beneficial in an investigation and which can further allow an investigator to understand what applications were being used by a suspect or at the time of the attack. It can also be possible that remote attackers would have some stored data, tools in RAM rather than on the system.

Some tools can do that work

MoonSols DumpIt it is a fusion of Windows 32 bit and Windows 64 bit in one executable, no questions are asked to the user end.

It is a compact tool that can make it easy to save the contents of your systems RAM. It’s a console utility but no need to open command line or master a host command-line switch. Instead, all we need to do it is Only a double click on the executable is enough to generate a copy of the physical memory in the current directory.

As we can see in the above image this tool is already providing us with the destination of the image that we are going to create by this process and asking us at the user end we want to continue or not.

If we want to continue then we have to press “y”.

Now we can check the path which was given by the software whether we are able to capture the RAM or not.

Now we can see that our captured memory which is known as the RAM image is successfully created.

Magnet Forensics is a free RAM capturing or memory imaging tool which is used to capture the physical memory of suspects system, allows investigators to analyse and recover the valuable facts that are only found in the memory of the system.

Magnet Ram capture has a small memory footprint, that means investigator can run the tool while data is overwritten in memory. We can capture memory data in Raw (.DMP/.RAW/.BIN) format and easily analyse them.

This image can be used as evidence in the forensic investigation. Some evidence that can be found in the RAM is processed, a program running on the system, network connections, evidence of malware intrusion, registry hives, usernames & passwords, decrypted files and keys etc.

Now we can start the Ram capturing process by just executing the software by clicking on it.

Now we can see that our captured memory which is known as the RAM image is successfully created. 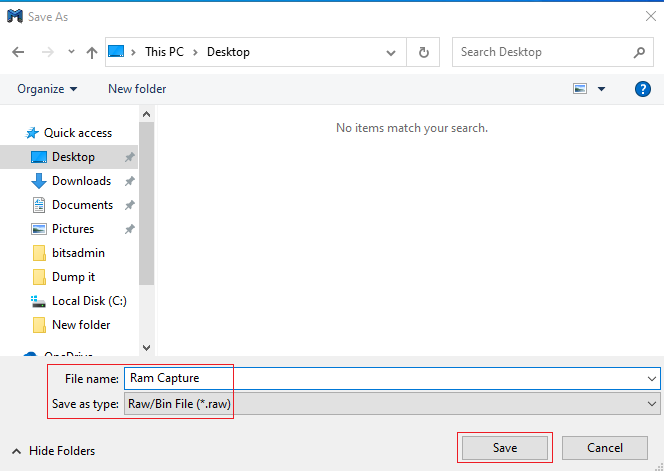 As we can see in the above image we have to provide the name of memory image and the format in which we want to capture the memory image.

After providing the above details now our process of capturing the memory image is started it depends on the size of the memory how much time it takes to complete the process.

After completing the process, it shows a pop-up message which indicates the process is successful and provides us the path location were our captured memory is located which we were provided earlier by us. 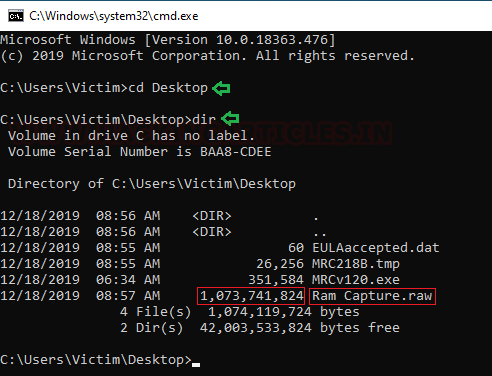 Now we can check our located path whether our memory image got generated or not as we can see in the above image that our image is successfully created now, we can analyse that memory image.

FTK imager can create the live memory image and paging file for both windows 32bit and 64bit systems. We can download the FTK imager from here and install in our system. The main purpose of building the FTK imager is to process and index data upfront and try to eliminate wasted time for searches to execute. No matter how many different data we are dealing with or amount of data we have to go through, FTK get us their quicker and better than anything else. Download Here

Now start the software of the access data FTK imager 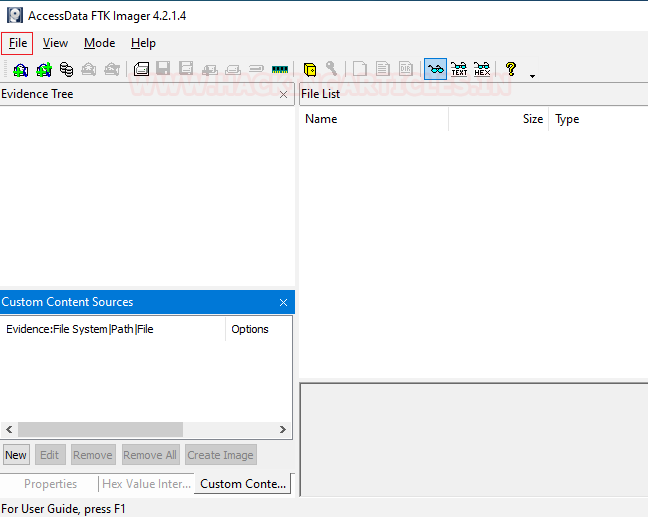 Now to start we need to click on the file button as shown in the above image. 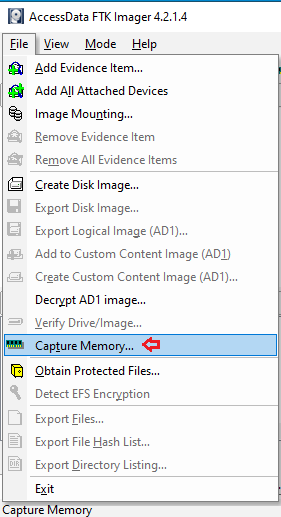 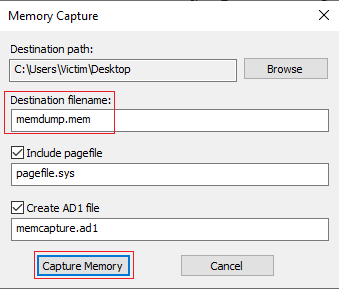 After providing that information it shows that our process got started along with that it also consistently the status of our process and the final destination or path was our image going to save.

After completing its shows, us the message which says “Memory capture finished successfully” and our memory image location or destination. 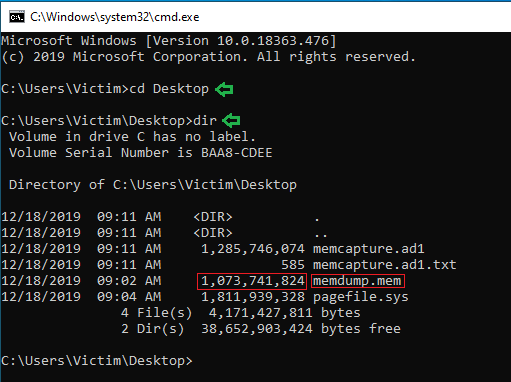 Now we are going to check on that location whether our image is saved or not, but as we can see in the above image that we were able to capture the memory image successfully.

It is a free forensic tool to reliably extract all content of the system volatile memory, even if it was protected by some active anti-debugging system. Were its separate 32bit and 64bit builds are available to minimize the tool footprint as much as possible.

Memory dumps captured with Belkasoft live ram capturer these live rams captured can be analyzed with any RAM analysis software.

But First, we need to download Belkasoft Live RAM capturer from here and install in our system.

Then open this software and select the path where we want to save our memory image and Click on the capture button. 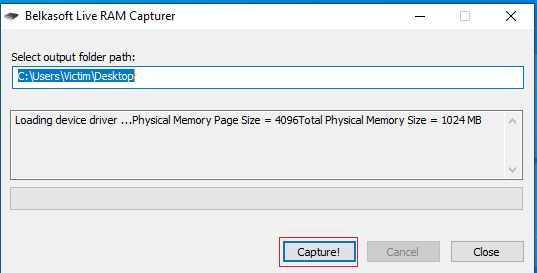 After providing all the details it starts to load its drivers to start the process of capturing the memory image, now it shows the active live progression of the task given by us to capture the memory image. 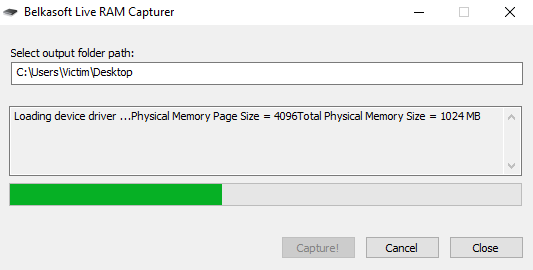 After completing the overall process, it completes it’s active progression by touching on the right side of its wall and provide us some sneak peeks of our captured memory and suggests to us its image analyser from belkasoft and also provides its link to download it. 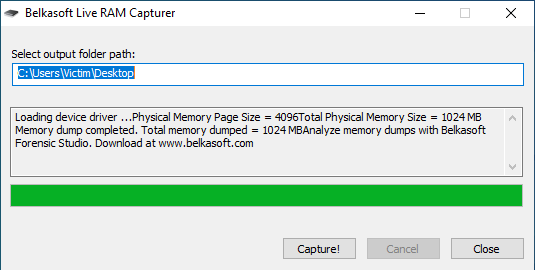 Now we need to check whether our memory will be captured or not. As we can see in the image given below, we succeed in our process. 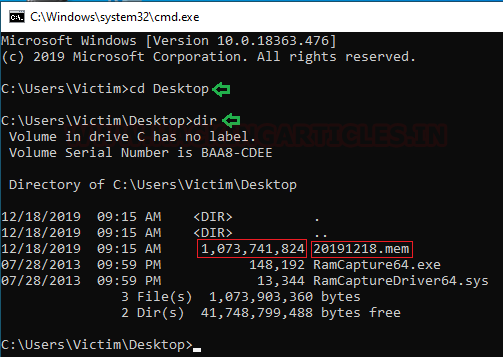 These are some ways or tools to capture the live memory image for analysing it for searching some evidence through it to help in the investigation of an investigator in his cases.

3 thoughts on “Multiple ways to Capture Memory for Analysis”