Android reverse engineering refers to the process of decompiling the APK for the purpose of investigating the source code that is running in the background of an application. An attacker would ideally be able to change the lines of bytecode to make the application behave in the way that the attacker wants. However, as easily as it is put, reversing and rebuilding an APK takes more than just a shallow statement. In this article, we’ll be looking at the basics of decompilation, rebuilding, signing and changing the behaviour of an application while we do this. Let’s start.

Uncrackable is an intentionally vulnerable APK created by Bernhard Mueller which was later undertaken by the OWASP MSTG project. Level 1 of the 4 levelled challenge of APKs focuses on the basics of root detection bypass and hooking to find a secret encryption key. To install this application, follow here. 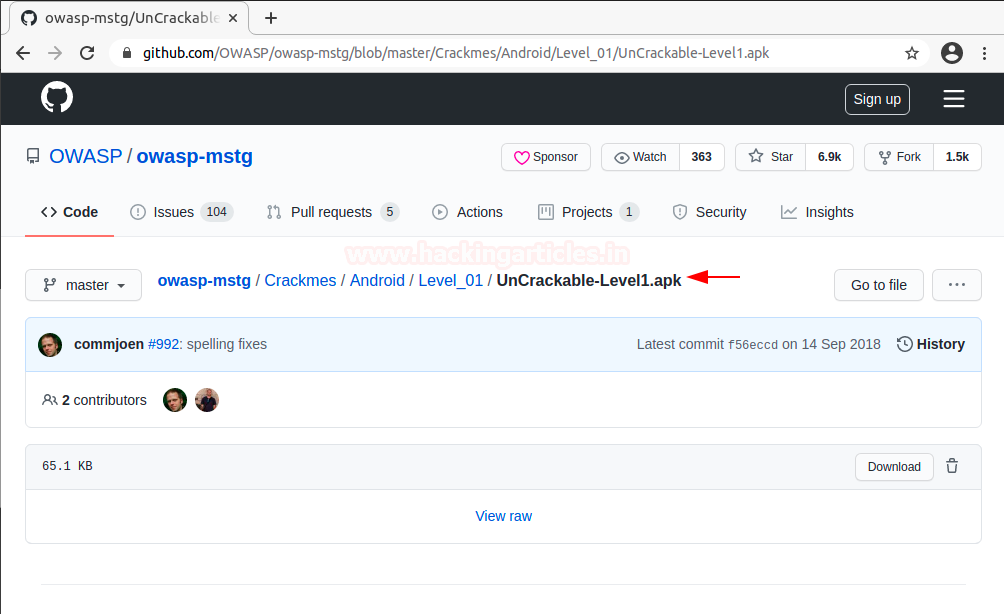 After you download the apk and install using adb in your genymotion emulator, you’d see something like this: 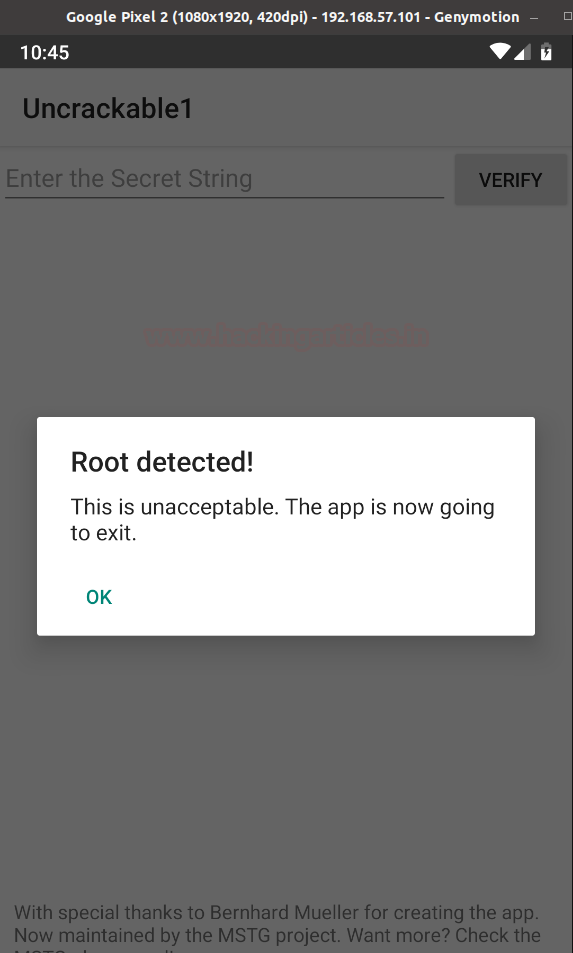 This means that the application has some kind of logic hardcoded that prevents it from opening in rooted devices and since genymotion’s android APIs are root by default this is presenting the user with this problem. In real life environment, you’ll see many applications in which developers code this root detection logic as a security measure to prevent aid to an attacker in his campaign and thus safeguard PIIs. However, this could also pose the possibility of poor coding practice and is exploitable. There are multiple ways to solve this first hurdle; hooking and removing this restriction while runtime is one option, making the application debuggable and injecting while executing is also one method but we’ll follow the third method, which is reversing method. We’d decompile the application and remove the exit logic of the application to prevent exit.

It is to be noted that Dalvik bytecode is stored in *.dex format. This dex is the compiled version of source code which is further packed with resources, manifest, META-INF (certificate) into a zip file also known as an android app with an extension *.apk.

This *.dex file can be decompiled using dexdump which is provided in android SDK. In articles prior to this, we’ve used the dex2jar tool to convert dex files in readable jar format. This same was done by first unpacking the APK using apktool and then further converting classes.dex file into readable jar variant. So, let’s unpack the APK first:

Here is something different from previous time; -r option has automatically converted classes.dex into smali files.

Smali in android is similar to what Assembly in Windows is. This is the human-readable version of dalvik bytecode. Baksmali is the tool which decompiles dex into smali files. Here, note that baksmali has converted classes.dex in smali files.

A nifty little tool known as bytecode viewer converts APK directly into readable format java code thus eliminating the need to use apktool then dex2jar and then jd-gui to view a readable java format. Here is how the application looks decompiled in bytecode viewer. 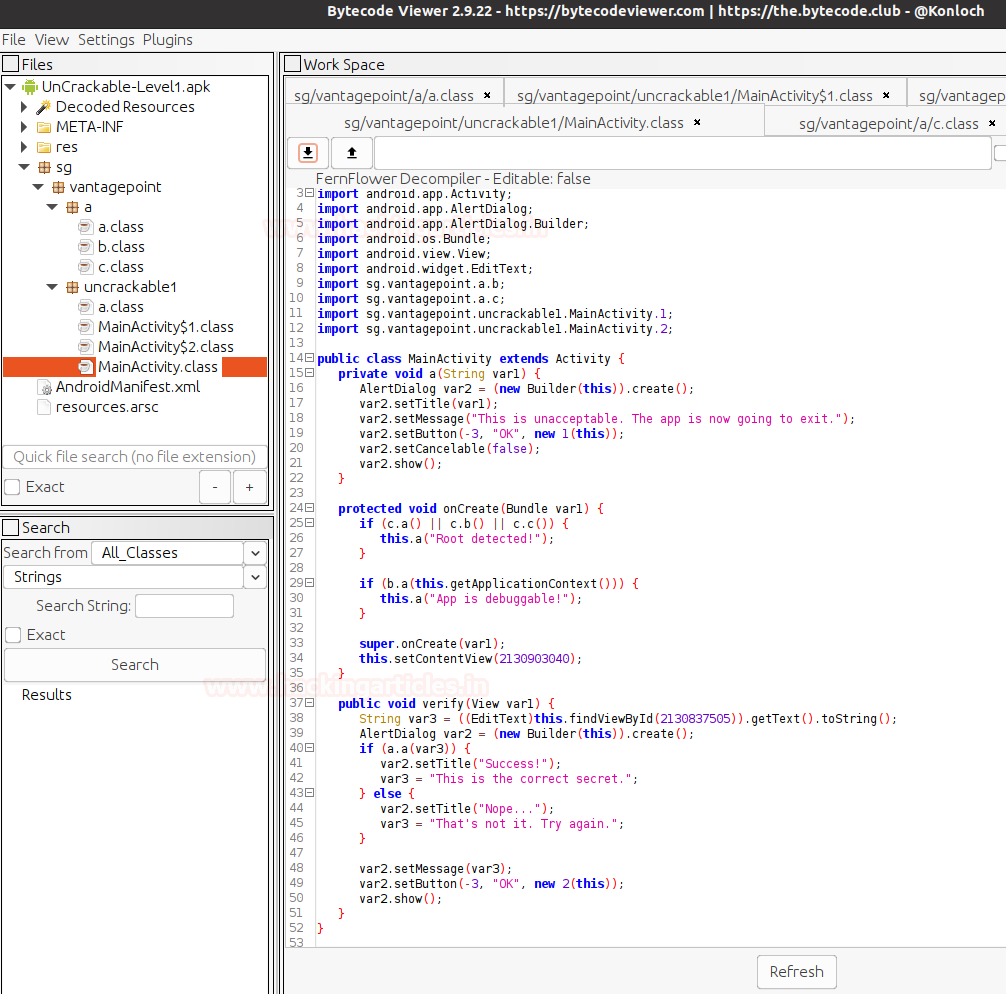 Oh, wait, while just decompiling this APK, my eye went on an interesting piece of code under MainActivity$1.class.

One thing to be noted is that since this application was obfuscated while building, it is forcing it to display ambiguous information like same class name multiple times, change of name of methods etc. This is due to Proguard obfuscation technique, which, is not properly implemented since the code is still pretty much readable. Strong obfuscation makes it a headache to reverse an application and makes it near impossible for an average attacker to patch APKs.

Now, let’s have a look at MainActivity$1.class 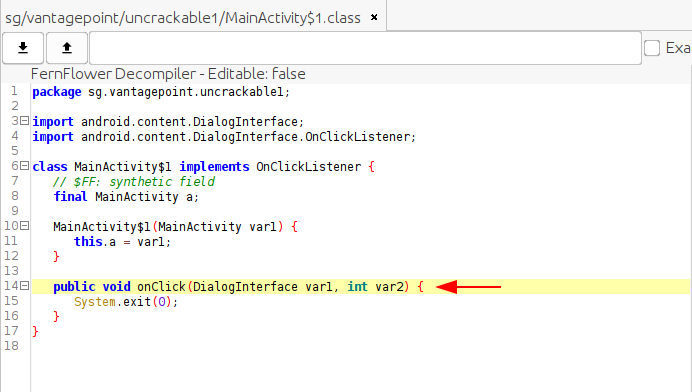 Did you note as well that application is exiting using an onClick popup? Ahh! This popup is the popup that we saw in our installation step where the application is detecting whether the device is the root or not. So, hypothetically speaking, if I remove the logic to detect SU binaries, the system won’t exist. Yes, that is one correct method, but I leave it to you readers to do and implement that. Other easier method is to remove the exit dialogue itself. This way, even if the application detects SU binaries, it will still not exit since system.exit won’t be existing now. To do that, I need to open the smali file of this class. 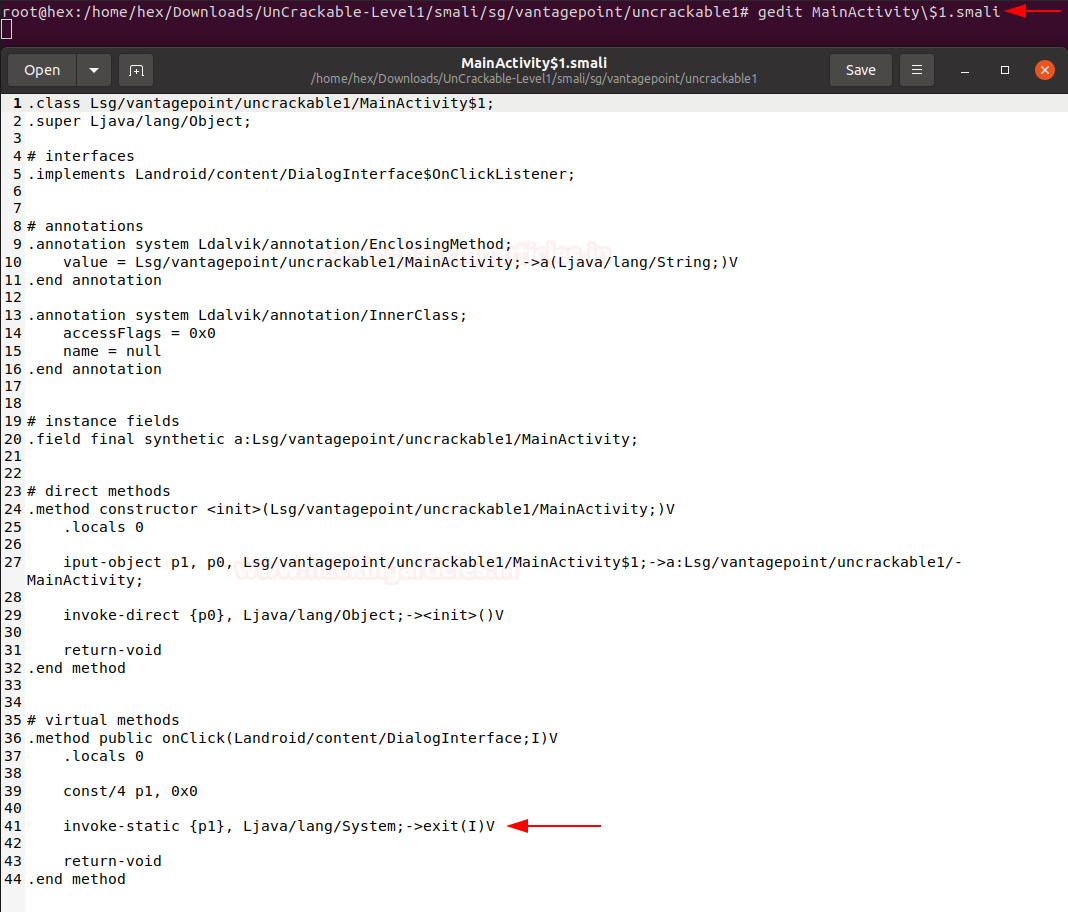 Do you see the line where I’ve marked red? This is the same system.exit logic that we just saw. Now, it takes a little practice to understand smali instructions and is certainly not possible to understand this in a day or two but with a little smart work, we can make our way around to bypass root detection. Here, invoke-static refers to a function being invoked, that is defined in the very adjoining line of code: Ljava/lang/System. This is the path where a package of the system is stored. Next, exit(I) corresponds to exit() method of System, with I as in integer as a value which is denoted by V. Pretty simple right? Now let’s delete this line altogether! 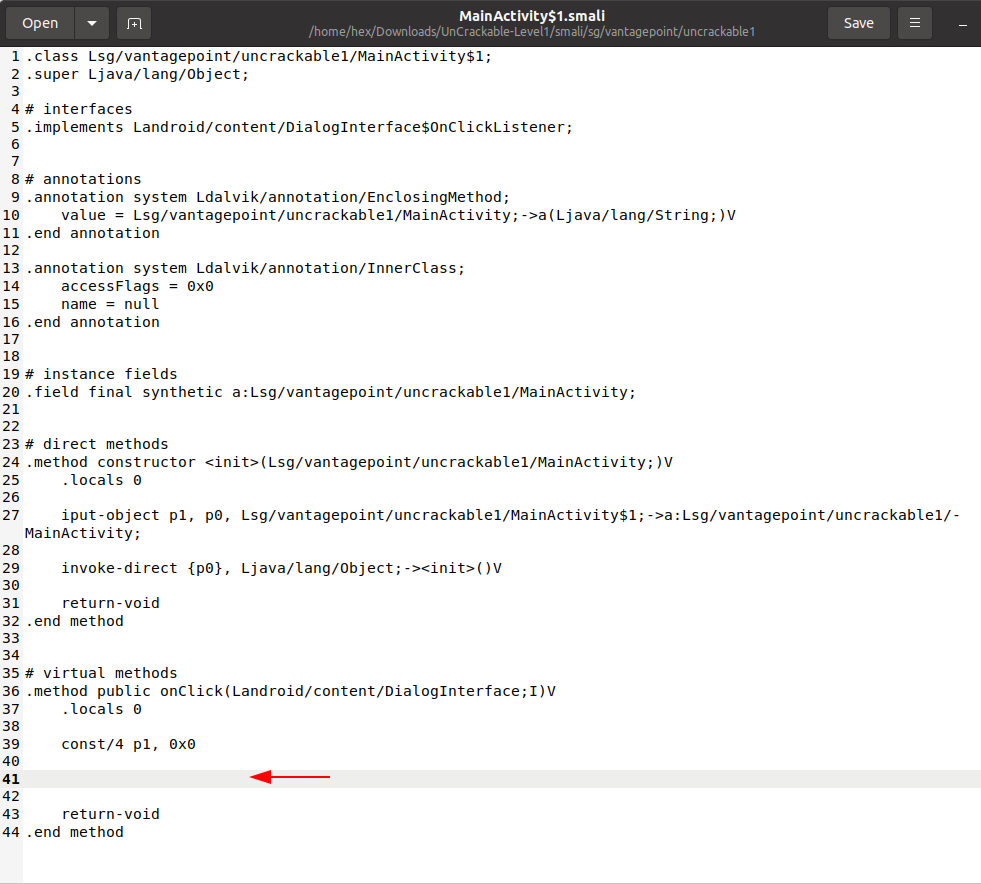 That’s more than just pretty. This way we can rely on return-void instruction to return null value every time application detects a SU package and so, whole logic is rendered useless just by this alteration. Let’s try to rebuild this APK now.

OOPS! That’s peculiar. Did this work for you? Probably not. Let’s understand why.

When you sign an APK, the signing tool attaches the public-key certificate to the APK. The public-key certificate serves as a “fingerprint” that uniquely associates the APK to you and your corresponding private key. This helps Android ensure that any future updates to your APK are authentic and come from the original author. The key used to create this certificate is called the app signing key.

A Keystore is a binary file that contains one or more private keys.

Every app must use the same certificate throughout its lifespan in order for users to be able to install new versions as updates to the app.

But you must be wondering WHY IS THIS IMPORTANT?

We’d be creating our own Keystore and signing our APK using it. To do this we’ll use a tool called keytool.

After that, you need to fill up your keystore password, name, org, city details and you’d have prepared yourself a keystore. 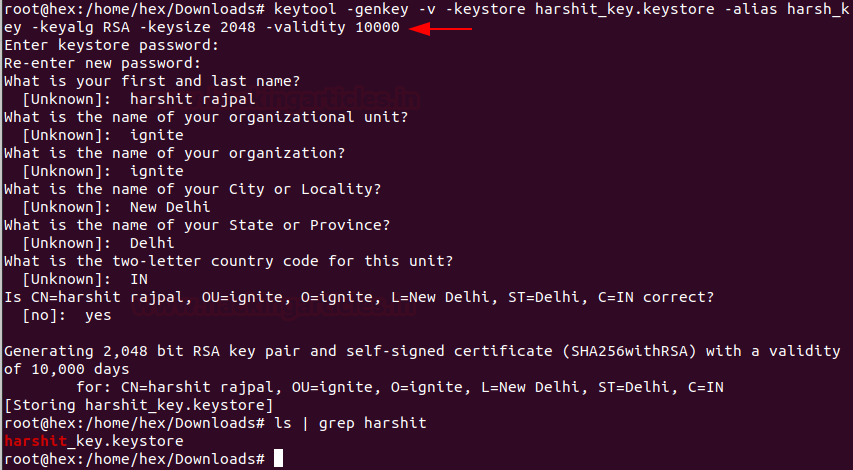 Basically, your keystore now saves a self-signed certificate with 10,000 days of validity, which is an RSA 2048 bit key. Now, let’s sign our patched app using this key. 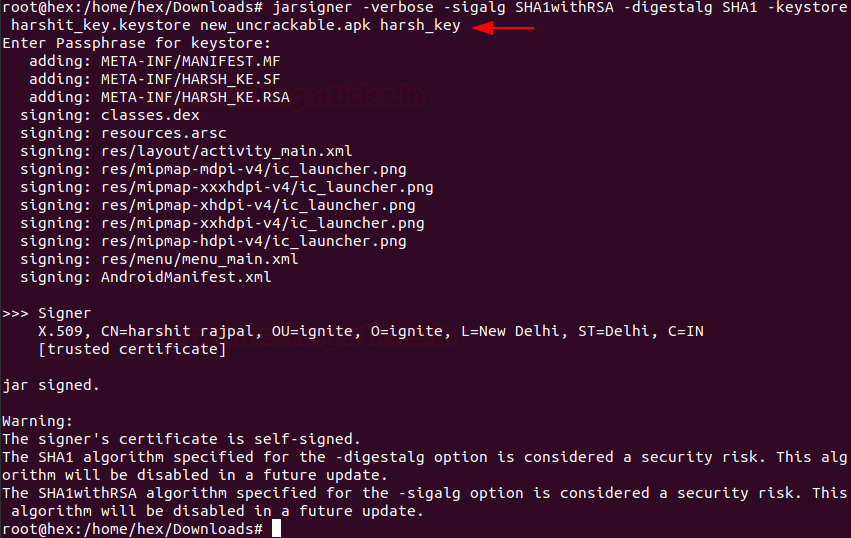 Now, let’s try once again to install our apk in genymotion device using adb and see if this time it throws an error or not. 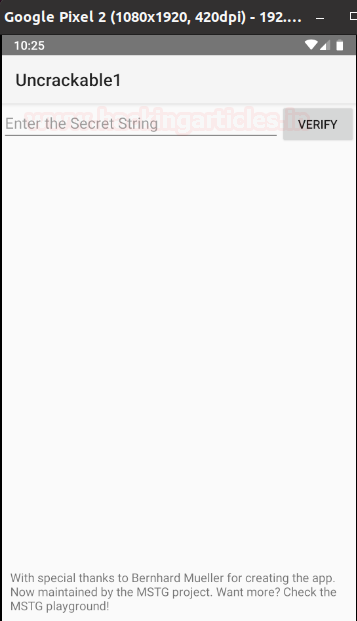 Now, the challenge is to extract the secret string and get it validated as a flag. Upon further investigating it came to our notice that method a() is returning the value of the secret string. Ha! This is poor practice but helpful for our case.

Now, all we need to do is to draft out a javascript hook for frida that will change the implementation of this a() and give the secret as an output in our very own console. Huge shoutout to 0daylabs for giving the code for this hook. Here is the code:

Now, we need to run this code using frida and check the output. 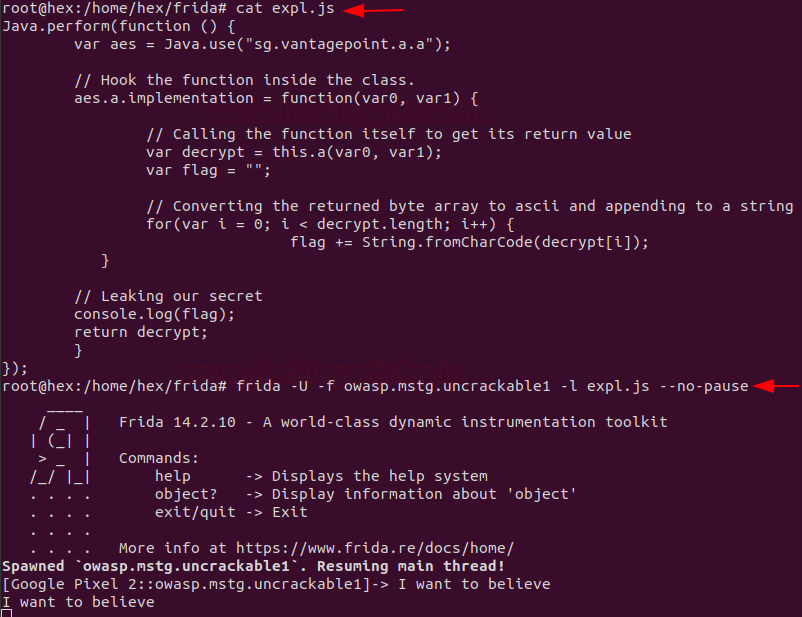 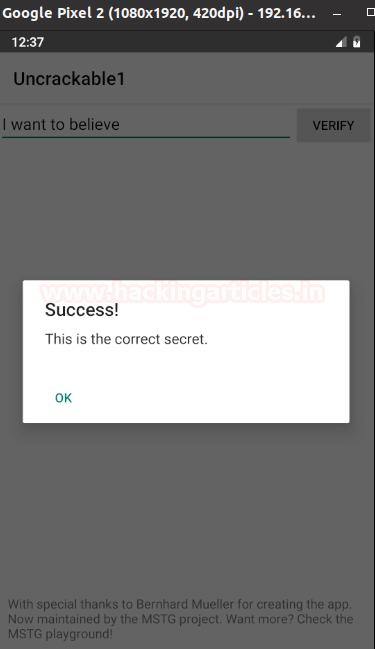 And just like that, we’ve solved this challenge. Thanks for reading.